I had to take the ’08 135i in to the dealer for routine service this week and had an opportunity to say hello and talk to the sales manager. If anyone has the pulse of what’s working at a car dealership, it had better be the sales manager. And this sales manager says the new 5 is selling well.

I asked how the customers were taking to the electric power steering and had there been any feedback about it. He told me that I was much more attuned to that than the normal customer. Well maybe, but I suspect most readers of BMWBLOG could feel the difference between an EPS rack and a hydraulic rack.

So, the question of the week; do the friends you talk to regularly know the difference? (And just to dredge up an article using the way-back machine)

There’s news that GM and BMW have entered an agreement to cooperate on fuel cell technology. In exchange for funding, GM will share their research on fuel cells with BMW. If I remember correctly, GM has been pursuing fuel cells for some time and at one time was working with Ballard Power Systems.

Fuel cells take in hydrogen and oxygen, run them through a catalyst and spit out spare electrons (electricity) and water – and, depending on the source of the hydrogen, some other emissions. The choice of catalyst influences the efficiency of the fuel cell and the operating temperatures (which generally range from hot to extremely hot). A single fuel cell wont do the trick – so they are combined into stacks to provide the appropriate amount of power. 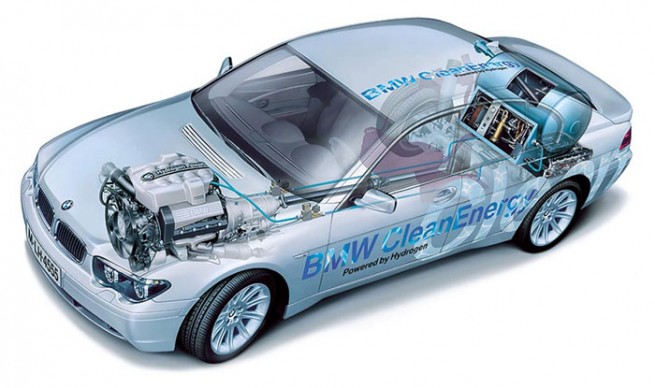 Ballard has a number of fuel cell stacks available (their website is:http://www.ballard.com). What is interesting is they split off their automotive work in 2008 into a subsidiary. The quote from their 2011 annual report is telling: “The purpose of the AFCC Transaction was to decrease our investment in automotive fuel cell research and development due to its high cost, uncertainties surrounding government mandates relating to the adoption and deployment of automotive fuel cell powered vehicles, the lengthening timeline to automotive fuel cell commercialization, and the negative impact of these factors on our production volumes and revenues.”

From an electric vehicle perspective, the fuel cell replaces the batteries. That means their energy density has to be better (or they have to be substantially cheaper) than existing or near-horizon battery technology in order to be useful. There is also the issue of how best to supply the hydrogen. Containing a given mass of hydrogen is much more difficult than say a similar mass of gasoline (but the hydrogen, believe it or not is safer than the gas – once pressurization is taken out of the equation).

Don’t expect a fuel cell breakthrough in the short term, based on what can ascertained, the technology is not at the tipping point for automotive applications. What this pact between GM and BMW tells us is that GM is strapped for research funding and BMW is not.

Oh, as an aside, BMW does have some experience with hydrogen fuel cells. They are using fuel cell powered fork lifts at the Spartanburg, SC plant. One aspect of the fuel cell fork lift that beats the battery powered unit, is that the fuel cell unit produces full power until it runs out of ‘fuel’, unlike the battery powered devices which can get sluggish as they discharge. The fuel cells used in the BMW Spartanburg plant come from Plug Power, their website is: http://www.plugpower.com/Home.aspx

Here’s a video discussing the use of the fuel cells:

BMW sent a note out to journalist mentioning that they were wishing everyone Happy Holidays and then mentioning that you could win BMW swag! Here’s the relevant info from the release:

“Woodcliff Lake, NJ – December 14, 2011… Driving in the holidays a little early this year, BMW USA is spreading some seasonal cheer to fans via its Facebook page with the launch of the first-ever BMW Ultimate Gift Giveaway — awarding lucky users with daily prize packages including Original BMW Accessory and Lifestyle products such as watches, baby racers, key-chains and more, from December 14 to December 23.

“The BMW Ultimate Gift Giveaway is simply our way of saying ‘thank you’ and wishing a happy holiday to all the BMW fans out there who have supported us throughout the year and continue to remain enthusiastic about everything BMW,” said Trudy Hardy, Manager, BMW Marketing Communications and Consumer Events.

With passion for power, performance and luxury being the only qualifications, beginning December 14 on its Facebook page, BMW USA will award daily prize packages to fans of all ages—from the littlest drivers in the seat of its M Baby Racer to golfers equipped with BMW Championship gear and style-driven leather accessories for both men and women. Users enter the BMW Ultimate Gift Giveaway simply by visiting the sweepstakes tab to see the prize of the day and can check back daily for a chance to win even more prizes. They can also find more information on all of the prizes and see the full accessory product line at www.Shopbmwusa.com.”

So tell all your friends (or not), but let us know if you’ve scored any swag from the BMW Holiday giveaway.