Munich/Atlanta – October 1, 2011… BMW has written another chapter in motorsport history in the USA at the finale of the American Le Mans Series (ALMS), the 1000-mile Petit Le Mans, at Road Atlanta, in Braselton, Georgia. BMW Team RLL won a second consecutive manufacturers’ championship in the GT class to complete a 2011 hat-trick of titles. The drivers’ and team championships had already been secured two weeks ago with one race still to go. The last time BMW achieved this feat was in 2001 with the BMW M3 GTR. BMW only returned to the ALMS with the BMW M3 GT in 2009.

After a thrilling race, Dirk Werner (DE), Bill Auberlen (US) and Augusto Farfus (BR) ultimately achieved a third place finish, completing 367 laps around the 2.54-mile circuit. After an incident with a slower car in the closing stages of the race caused two pit stops to repair the damage, their teammates Dirk Müller (DE), Joey Hand (US) and Andy Priaulx (GB) finished the race in ninth place. 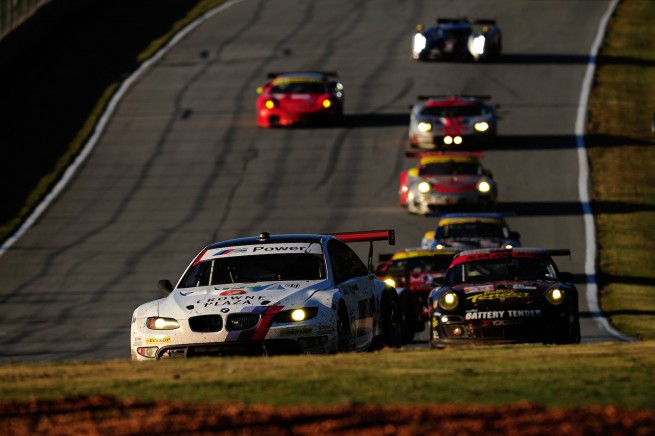 At least one BMW M3 GT finished on the podium in every single race this season. Dirk Müller and Joey Hand secured first place in the drivers’ championship, ahead of Oliver Gavin and Jan Magnussen (Corvette). Dirk Werner and Bill Auberlen (US) finished third overall. BMW Team RLL clinched victory in the team competition, ahead of Corvette Racing. In the Manufacturers’ Championship, BMW finished ahead of Porsche.

With this strong result, the BMW drivers scored valuable points for two championships. The 1000 mile race at the roller coaster Road Atlanta circuit not only counts towards the American Le Mans Series, but also the 2011 Intercontinental Le Mans Cup.

“The entire team deserves a huge compliment. Everyone involved on both sides of the Atlantic have been justly rewarded for their tireless efforts”, said BMW Motorsport Director Jens Marquardt. “To celebrate this kind of success in one of the toughest racing series in the GT class is a fantastic result. Throughout the season, the key to this success was excellent drivers, a very low error rate, a team working in almost perfect harmony, our strong tire partner Dunlop – and the BMW M3 GT, of course. Our engineers really raised the bar in GT racing with this car this year.”

Ludwig Willisch, President of BMW of North America, added: “Congratulations to everyone at BMW Team RLL. To achieve an excellent result like this with the BMW M3 GT in one of the most prestigious GT racing series in North America is simply fantastic. We can all be proud of this achievement. More BMW M cars are sold in the USA than anywhere else in the world, underlining the importance of this success.”

BMW also emerged victorious in the “Green X Challenge” category, which is all about using resources responsibly. 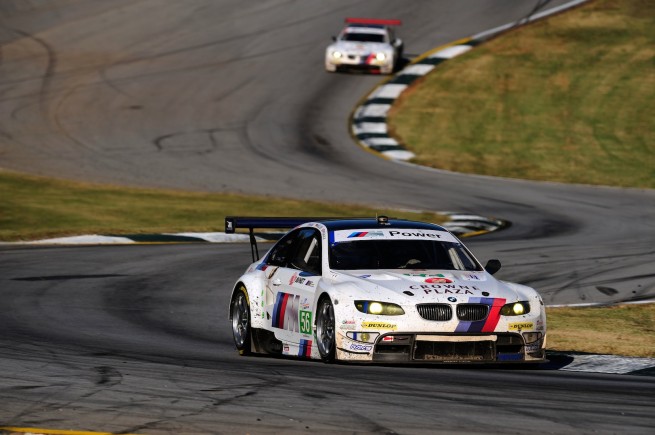 Bobby Rahal: “We came here to win the Manufacturers Championship for BMW and we did it. It was not an easy race. We had a number of tire punctures, an incident with a slower car in the dark, and so much traffic. This kept us from the top of the podium, but we knew what we had to do to win the Manufacturers Championship and I am certainly pleased to bring the title to BMW for the second consecutive year. I am extremely grateful to all of the sponsors and partners that support BMW Team RLL.”

Dirk Müller: “In the race, I had a moment of shock. I came into a blind apex in fourth gear and just avoided crashing into another car that was stopped on track. I just clipped the right side of my car and had to pit for repairs. Right now, I am just happy to be here in one piece. Nevertheless, we had a great season. I am very, very pleased that were able to secure the driver’s championship at the last race. We can be very proud on our achievements.”

Joey Hand: “It is a great feeling racing here as the 2011 driver’s champion. It was a great effort from everyone, BMW Motorsport, BMW Team RLL, Dunlop and Crowne Plaza. This championship was not just won by me and Dirk. It was won by the entire program over the course of three years. This BMW is the coolest and most comfortable racing car I have ever driven. I simply had the greatest year of my career.”

Andy Priaulx: “I raced at Sebring where this successful season began, so it was another great experience coming over here and be part of BMW Team RLL once more at the Petit Le Mans. The atmosphere here is as brilliant as the BMW M3 GT. Congratulations to Dirk and Joey for winning the driver’s title and a big thank you to everybody in the team. I enjoyed the weekend very much.”

Dirk Werner: “It is a bit of a pity that we lost a second place finish, but we’ve been able to secure the manufacturer’s title for BMW with a podium. It was a very tough race. As they did the entire season, the team helped us with great pit stops to gain positions in the race. The team did an absolutely fantastic job.”

Bill Auberlen: “Petit Le Mans is always very tough race. Dirk did an absolutely great job in the final stint to keep us on the podium. I am very proud to be part of this team and continue to add to BMW’s trophy case. Congratulations to Dirk and Joey for winning the driver’s title.”

Augusto Farfus: “It is always great to race in America. The event here at Road Atlanta is amazing. I would compare it to a small Nürburgring with regards to both the racetrack and the atmosphere. There are a lot of BMW fans. The spectators are very close to the circuit and we can see them waving and cheering. This season has been very successful for BMW, and I am proud that I was given another chance racing in the ALMS with such great teammates.”

This completes an extremely successful motorsport season in the USA for BMW. On September 17th, TELMEX Chip Ganassi Racing, with Felix Sabates drivers Scott Pruett and Memo Rojas behind the wheel of a BMW Riley, secured the drivers’ title in the GRAND-AM Rolex Sport Car Series at the EMCO Gears Classic in Lexington/Ohio. For the pair in the TELMEX Chip Ganassi Racing BMW number 01, this was the second consecutive title with BMW Power. Paul Dalla Lana of the Turner Motorsport team also had reason to be happy. He drove a BMW M3 to the drivers’ title in the 2011 Continental Tire Sports Car Challenge Grand Sport Class – also at the Mid-Ohio Sports Car Course. The Turner Motorsport team can also celebrate the team title, while the championships also went to BMW for a second consecutive year in the engine and manufacturer competitions.