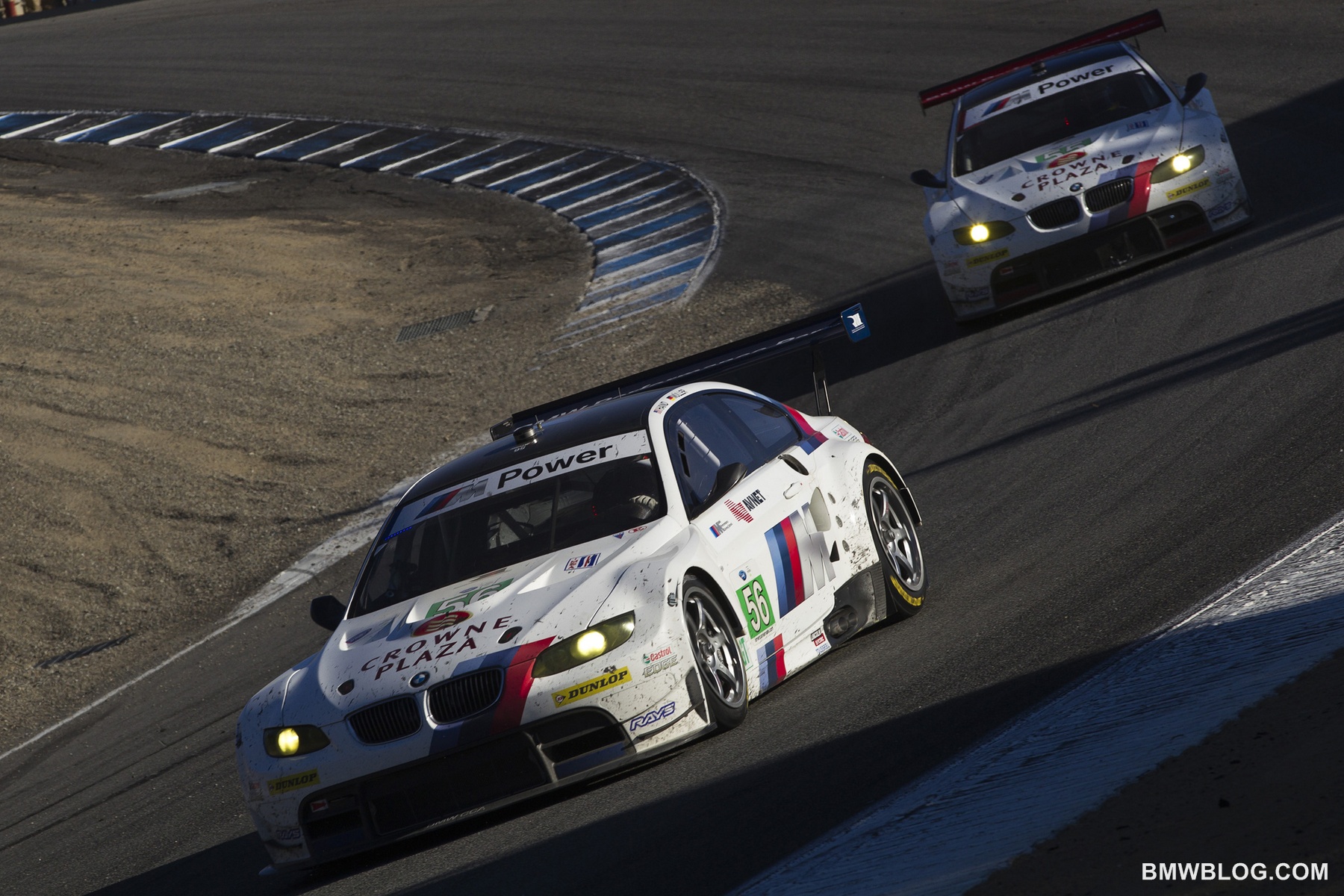 “A Drivers Championship – against this year’s competition – is fantastic,” said Joey Hand. “Dirk and I are a great team. We had a great showing from our Crowne Plaza and Avnet partners this weekend. It was great to win in front of them. The Dunlop tires were really strong all week. I am excited…that’s for sure!” 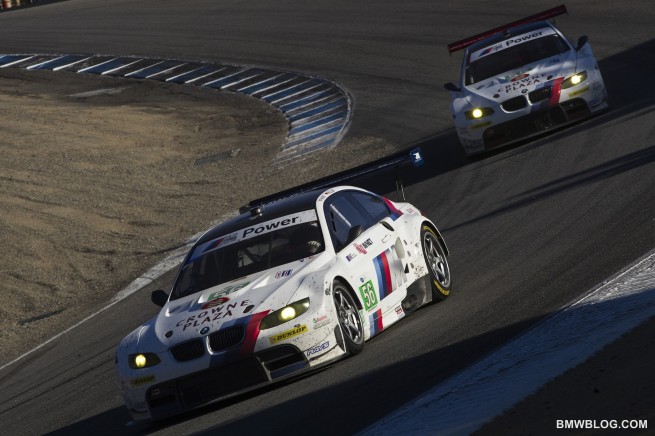 Starting from the pole, the duo completed 236 laps in the six-hour race around the 2.238-mile, 11-turn Laguna Seca circuit in the hills of Monterey, California. The No. 55 BMW Team RLL M3 GT of Bill Auberlen and Dirk Werner finished in fifth place to maintain their third-place position in the Driver point standings. Following the race the third-place finishing Ferrari was penalized 90 seconds for avoidable contact, moving Auberlen and Werner up to fourth.

Both BMW M3 GT cars were very strong in the opening hour of the race. Joey Hand used his pole position to build a 20-second lead by the end of the first hour. Hand maintained his lead through the first round of pit stops, while stablemate Bill Auberlen in the No. 55 M3 GT was able to push the No. 4 Corvette until his tires were damaged and subsequently passed him to move into the second position. Auberlen’s effort would prove key as the Corvette was the only team that could keep BMW Team RLL from a second straight team title. 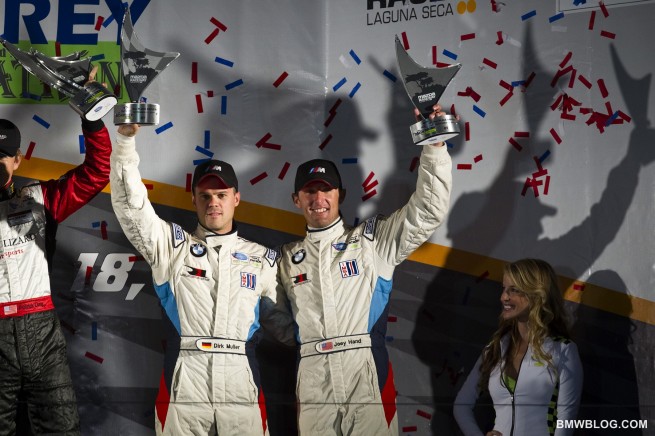 All through the six-hour contest, the top five GT Class competitors were within a few seconds of each other. Finally, at the top of the final hour, each competitor had completed their last pit stops and it was a sprint race to the finish. With 40 minutes remaining, Muller was in first position with a comfortable lead over Auberlen in second, but a left tire puncture sent Auberlen to the pits for a new Dunlop tire, dropping him back to fifth.

Three minutes later, the fifth caution of the race tightened up the field again. After the restart with only eight minutes remaining, Dirk Muller dropped back to third during a heated battle with a Ferrari and a Porsche, but he moved up to second on the last lap when the second-placed Ferrari began to run out of fuel, opening the door for Muller to repass for the second-place podium finish.

“Fantastic! I am so happy for Joey, for the Championships, for Rahal Letterman Lanigan, for BMW, for Dunlop, and for all of our partners and supporters,” added Dirk Muller. This one means so very much to me. This year we felt it, we worked so hard and so well together. Thanks so much to everyone!” 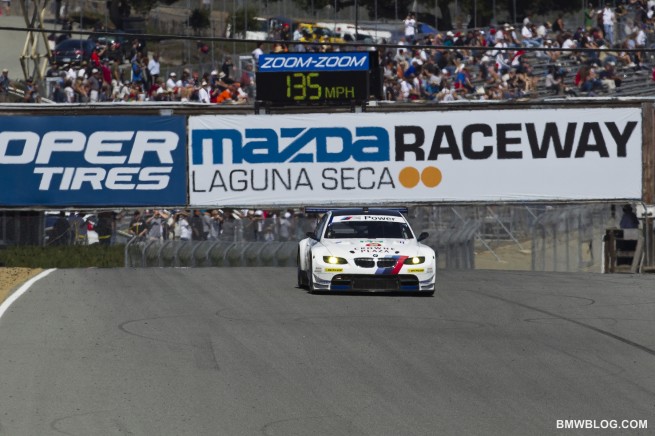 “As we prepared for the 2011 season, we knew we had all of the ingredients to contend for the championship, but it takes a lot of effort from everyone involved to actually make it happen,” said BMW Team RLL co-owner Bobby Rahal. “Each one of our drivers gave us everything they had, BMW provided us with a great car and outstanding support from throughout their great organization and the crew both at the track and at the shop worked extremely hard to make this happen. We are happy to celebrate these championships with our partners at Crowne Plaza, Avnet, Dunlop, Rays and everyone else involved with BMW Team RLL!”

The BMW Team RLL squad has one final order of business as it looks to clinch its second consecutive ALMS GT Manufacturer championship in the 2011 season finale. The final round of the American Le Mans Series season is the challenging 10-hour Petit Le Mans, which will be held on October 1 at Road Atlanta. 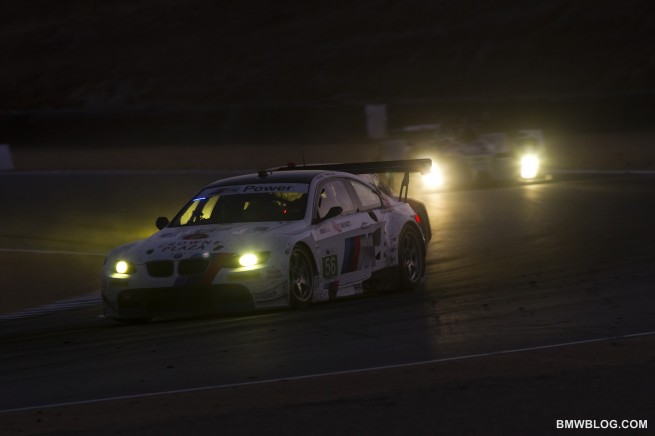