BMWBLOG team walked the floor today at the 2011 Frankfurt Auto Show and at the end of a long, yet exciting day, we have  a quick report from one of the largest car shows in the world.

The Weismann roadster utilizes the BMW N54 engine and has reached the end of its production (since the engine program is moving on). It is a bit more powerful than the stock N54 and weighs under 1500 kg. The paint job (and interior trim) stands out – too much, possibly for some, though there are enough color schemes to find something from somewhat subdued to substantially outlandish. More on Weismann later.

Artega makes a lovely GT car, think Lotus Evora, but it’s German. Drivetrain is via Audi (IIRC) and the mid-engined, low, lightweight car has all the earmarks of an affordable exotic. Not available in the US (of course).

Abarth has been hot rodding Fiats for as long as I can remember, and the new Fiat 500 has been Abarthed as well. The Fiat 500 is a direct competitor to the Mini of course, having a hip, retro vibe, though word has it that it isn’t the same dynamically as the Mini. Regardless, Abarth knows how to tart up a Fiat.

Cadillac showed off its four door cabrio concept known as the Ciel. This is a pretty design, and being a four door, it’s significantly longer than most four place cabrios. Very stunning car, but they really need to add a second cowl and windshield between the front and back seats and then it would be a dual-cowl phaeton. 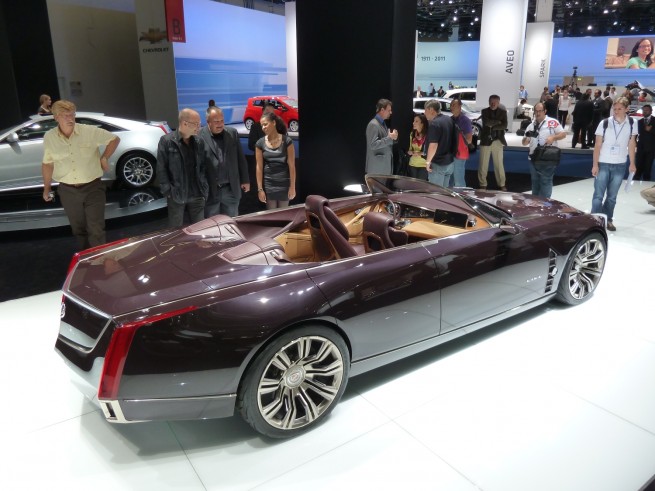 Ford showed off the four door (I guess you can call them doors) Evos concept. Will the doors make production. Not a chance. But a good looking car nonetheless.

The Russian start-up, New, showed off it’s version of ‘oddest door configuration’ of the show. The occupied a small space in Hall 6, mixed in among another of odd companies. We’ll do some more digging to see how viable this is, but when Saab can’t catch a break you better have something more than clever doors to survive.

Motorized Pong. Yes, motorized pong, played in this case with a video screen and two electric smart cars. The drivers had to move forward or backwards to keep the opponent from scoring. It shows to what lengths folks will go to create gimmicks to get press on their cars (see, it works!).

And finally, the Citroen Tubick. Tubick is French for ‘blood sucking leech van’.