BMWBLOG Interactive: Heaven on Four Wheels – Tell us YOUR Tale!

We’ve all experienced ‘that moment’ – the one where time stood still. Thousands of hours and miles behind the wheel are punctuated by periodic moments of automotive bliss, and therein lies the allure that draws us to fast cars. Quite likely your love of cars was built upon these cornerstone moments, and you look forward to another romp behind the wheel with these fond memories in mind.

The range of magical driving experiences varies wildly from road trip to back-road blitz, race-track fury to first date humor, checkered-flag glory to mother-in-law pay-back, police chase to drive-thru restaurant prank. But no matter the experience, at the end of the day a portfolio of good times is saved in the vault of your heart and mind. In essence, these memories define our love of driving and our subsequent love of cars. 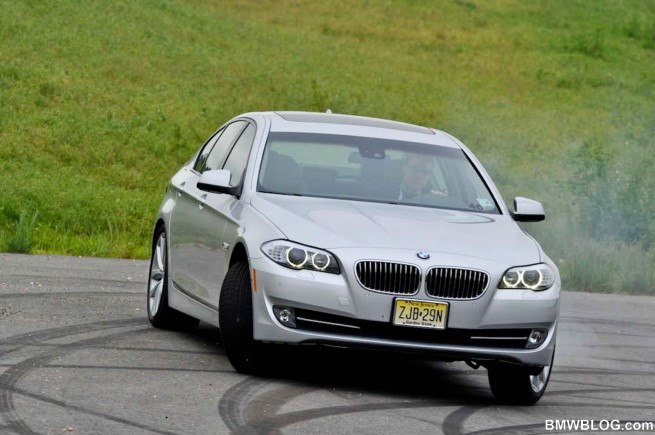 Now that we’ve all gathered around the camp fire, it’s time to break out the whisky and let the good time stories roll. Since this was of my origination, I suppose it’s my turn to tell the first story, so here it goes…

After several blissful years, it was time to part ways with my beloved E30. All that was left of her was an old set of shoes – the round metal and rubber kind. After posting a classified ad for the wheels and tires, a kind young man contacted me for their purchase.

Dead of winter in the Great Canadian North, a blustery snow storm rolled in just hours before our appointment time, leaving the roads fluffy and white. At ‘T minus 5,’ a bright red E30 325iX rolled into my driveway, throwing light down the narrow laneway. “I’ll take ’em,” he said, sliding his hand around one rim approvingly. We loaded the last four remnants of my E30 into his car and he jumped back behind the wheel, his wallet a little lighter.

Of course, two genuine car aficionados cannot cross paths without a bout of intense conversation. Pouring over every detail of the E30s we both adored, a mutual respect for these magnificent quasi-classics granted us an automatic kinship. Two coffees and a spread of Greek food later, we set off from the neighborhood restaurant for our respective homes, the sun now fully set.

“Wait! How do I get back to the highway?” he blurted out, window half-down.

“Do you have winter tires on your iX?” I replied.

“Only the best for my snow machine.”

“I’ll show you back to the highway, but try to keep up!” I threw over my shoulder.

Cue the music and dim the lights, a very good time was about to ensue behind the respective wheels of our icy BMWs. With fresh Blizzaks installed on my E36 328iS, it was time to punish the snow. Engine warm, high beams on, heated seats warming and DTC off, I set course for the abandoned back roads linking up to the highway.

Feathering the throttle through second and third gear, my hands were a flutter keeping the tail inline. Fourth gear found plenty of traction thanks in part to rearward weight transfer, and the speedometer needle swung from left to right across the dash. Behind me followed a focused beast, its rear-biased all-wheel-drive gripping the snow through viscous couplings. The silent night was awakened by our angry engines spinning to redline; the glorious shrill of two inline-sixes filled the sky. As the landscape began to blur around us, we geared down and kicked the tail out turn after turn. Tall rooster tails of snow flew high, each snow flake fearing for its life. Counter-steering past every apex, our headlights fell off the road until the rear wheels were back in line; no matter as the moon shone brightly and lit the freshly fallen snow along the plowed up snowbanks. Given unlimited fuel and twisty roads, I would still be out there, gleefully drifting and gliding in a winter wonderland. Heater blasting with sunroof open, balancing the throttle at opposite lock – time stood still.

Alas, we ran out of road, and it was time for our Bavarian machines to part ways: playtime over. My newfound friend and I parked on a highway overpass to share a chuckle over our driving exuberance and say our final goodbye. As we both walked back to our cars, his red E30 started rolling down the overpass! “I need to fix that handbrake!” he yelled while sprinting to the open driver’s door. Twenty feet from the opposite guard rail he jumped in and steered her clear of the impending paint job. That near-miss likely redlined his heart! Apparently not unlike his car, this man was full of personality. One last chuckle and I turned my car around, flashing my high beams in ‘good bye.’

I savored my drive back home, sliding through glorious sweepers and ‘S’ bends until once again, the road finally ran out. Slowly pulling into my driveway, I turned the ignition off and sat in silence. Every star in the sky reflected off the glossy hood in front of me. Gripping the leather steering wheel, the stars aligned. I was sitting in my dream car, a well worn BMW of yesteryear. It had as much character as stone chips and I wouldn’t have traded it for the world. An intoxicatingly blissful and exciting drive culminated into an automotive experience the likes of which exotic cars would stretch to match. I had just had my ‘moment.’

What’s yours? My marshmallow on a stick is about to catch fire and it’s your turn to share the special drive that got you hooked. Tell us about the automotive tale that still makes you weak in the knees.

Our own circle of editors and contributors also wanted a turn. Here are their stories…

One of the greatest experiences to cement my love of automobiles came before I was even legal enough to drive! I was 13 years old, pumping gas at a local gas station for the summer to make enough money to buy me a new dirt bike. There was an old Volvo 240DL that was brought in for repairs long before I started working there. The owner never came to pick up the car when it was done so there it sat. A grey, manual transmission Volvo. All 4 tires had gone flat from sitting, and the battery had died.

I spent the better part of 2 days getting that thing to run. Filled the tires with air, charged the battery, and cleaned it. All part of my master plan to learn to drive stick (on my own) on the desolate streets behind the station after work hours. As the owner of the station knew what I was up to, he told me if I got caught by the police, he wouldn’t be able to help me.

I didn’t care! I was set on my path. I don’t know if it was the thrill of driving at such a young age, the chance of getting caught, or that I was going to learn to drive “stick shift” like all the cool older kids!

Now; I had seen it done millions of times, after all my dad drove a Fiat X1/9. I knew more or less how to start it, what gears were what and what to do with the clutch. The reality was, all that was forgotten the second I started the car and the excitement took over. The adrenaline was blinding me! I was so excited I had heart palpitations!

Engage first gear, a little gas, roll out the clutch….and stall! Ok, that wasn’t much fun! Tried it again, this time success! I was up and running. Not very fast as I was redlining first gear and had forgotten to shift! OK, let’s try second. Yes! Success, I was now going a whopping 35 MPH and I knew I would soon have to stop. Of course I came to a stop and forgot the clutch needed to be pressed. Stall! I did this for hours!!

I now had a massive sense of purpose to go to work every morning at 7am. I looked forward to 5 pm when I would take this old beat up, box of a car ticket to freedom! I would practice everyday for a month. By the end of the summer I was as good if not better than most guys that had their license. I knew I would want to drive nothing but a stick shift for the rest of my life! The lessons learned that summer cemented not only my love for driving, but my appreciation for what a car represented. Freedom and mobility! Like most 13 year olds, the cars plastered on my walls of my bedroom had new meaning to me. I’ll never forget that summer!

There was a road in south KC called ‘Food Lane’ and at one point they ran a culvert partially under the road and paved over the top of it. For all practical purposes it was a combination speed bump/launch ramp. A buddy of mine and I hit it at 35 mph one day and the Fiat pulled both front wheels off the ground (well the Fiat never pulled anything really – the front wheels kept going up the hill after the hill had already crested is more accurate).

God protects fools and small children (or so it’s been said) because I did not twist the steering wheel a millimeter whilst in the air. Came down with a resounding thud and the poor little Fiat was never the same afterward . . .

Shortly after I took delivery of my 135i coupe I organized a BMW meet and spirited mountain drive. It ended up being one of the best days I can remember and a perfect way to break-in my new toy. What started out as a casual meet with close friends and fellow Bimmer drivers turned into a 40-person meet with auto enthusiasts from all over the Southeast. We met in Charlotte, NC for coffee so we could talk over the plan. From there we made our way up I-40 toward the mountains and onto NC 226A in Western North Carolina. Our destination was the Diamondback Route – a 12 mile 190 curve heavily wooded scenic mountain pass that cuts through the Pisgah National forest.

My grin was from ear to ear as I took my 1er coupe through a variation of sweepers, tight hairpins, and switchbacks with several elevation changes. All I could think the entire time was – I don’t want this road to end. I was having so much fun and the 135i handled brilliantly! Seeing a gaggle of cars all around me on the drive added even more excitement to the day. I knew once we pulled over to meet after the run we would be all smiles – like getting off of the newest baddest roller coaster after the first ride. As the drive concluded we all gathered for some photo opps. And why not – we were surrounded by some of the most beautiful landscape in the entire US. And arguably some of the best driving roads as well. Luckily we didn’t encounter too much traffic during our run, and we all made sure to abide by the law and respect other motorists and bikers.

So the drive home was pretty somber as we all knew how much fun these cars can be on twisty roads – and for some the race track and Autocross courses. We all agreed another drive would be on tap later in the year. I had a blast sharing my passion for driving with enthusiasts and friends!

There’s plenty of room for all of us to leave our stories in the comment section below! It’s your turn.. 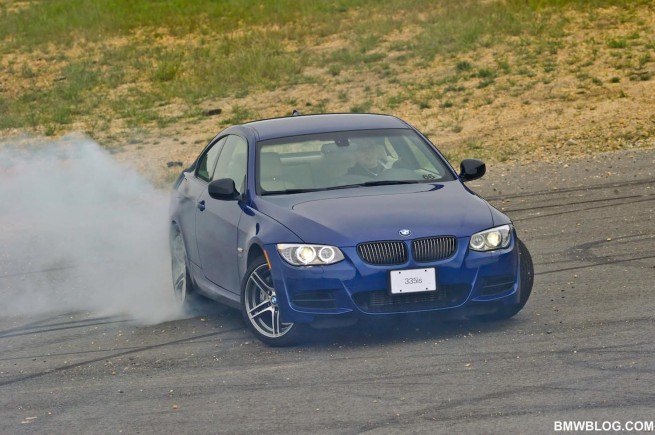 10 responses to “BMWBLOG Interactive: Heaven on Four Wheels – Tell us YOUR Tale!”