More than 100 friends and associates from all phases of his career, including the reigning Formula 1 World Champion Sebastian Vettel, Nick Heidfeld, Alessandro Zanardi, Peter Sauber, Franz Tost, Norbert Haug, Stefano Domenicali and the current BMW works drivers, looked back together with Mario Theissen on the past years, obviously with a special focus set on his time as BMW Motorsport Director. During his 12-year tenure, Theissen celebrated innumerable victories and titles achieved in a variety of championships and series by BMW teams and drivers. 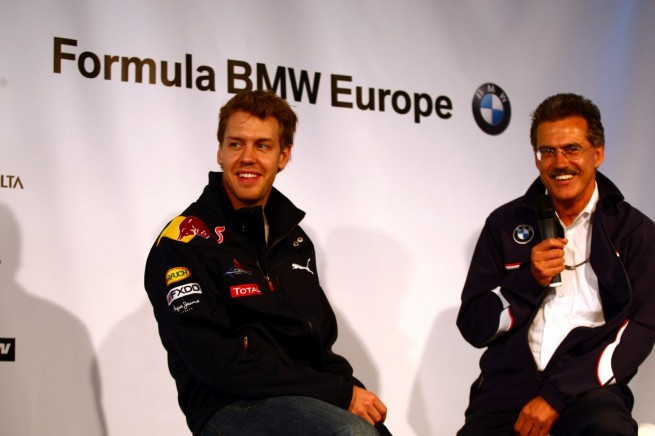 “I have really enjoyed my 34 years with BMW,” said Theissen. “I was fortunate enough to spend my entire working life with a fascinating company which constantly provided me with challenging projects. For me the motorsport project was the culmination of everything that had gone before. Extremely tight deadlines, forward and backward steps in two-weekly cycles, triumph and disappointment – and all this in the public eye. It was a fantastic time. During this period I met many interesting people, some of whom have become very good friends. I owe my colleagues a particular vote of thanks. Their untiring efforts ensured that BMW is a regular visitor to the podium, and that the motorsport history of BMW has a few more chapters now. Naturally I must also thank my family. During the past few years a few things obviously strayed, literally, off-track, and thus I am looking forward to a considerably more peaceful period in my life.”

“With the retirement of Mario Theissen an era in BMW Motorsport has ended,” said Dr Klaus Draeger, Member of the Board of Management of BMW AG with responsibility for development. “During his 12-year service he kept the BMW flag flying remarkably high. Whether in Formula 1, in endurance racing, touring cars or in young driver development programmes: Under Mario Theissen’s leadership BMW Motorsport celebrated success in all relevant disciplines. We are bidding farewell not only to an outstanding engineer and team principal, but also to an arch motorsport enthusiast. I would like to thank Mario Theissen heartily for his contributions, and am convinced he will continue to follow all motorsport disciplines which feature BMW participation with the same level of enthusiasm.”

Having started his career in the then-new engine analysis department, Theissen devoted precisely half of his 34-year service with BMW to the development of production cars. The second half comprised five years in an innovative projects role, then 12 years in the motorsport division. His first major event, namely the 1999 Le Mans 24 Hours (FR), resulted in resounding victory for the BMW V12 LMR. Serial successes followed, whether in Formula 1, endurance events, or in touring cars. Young driver development lay particularly close to his heart, and under his leadership BMW nurtured many of today’s Formula 1 drivers, including Sebastian Vettel.