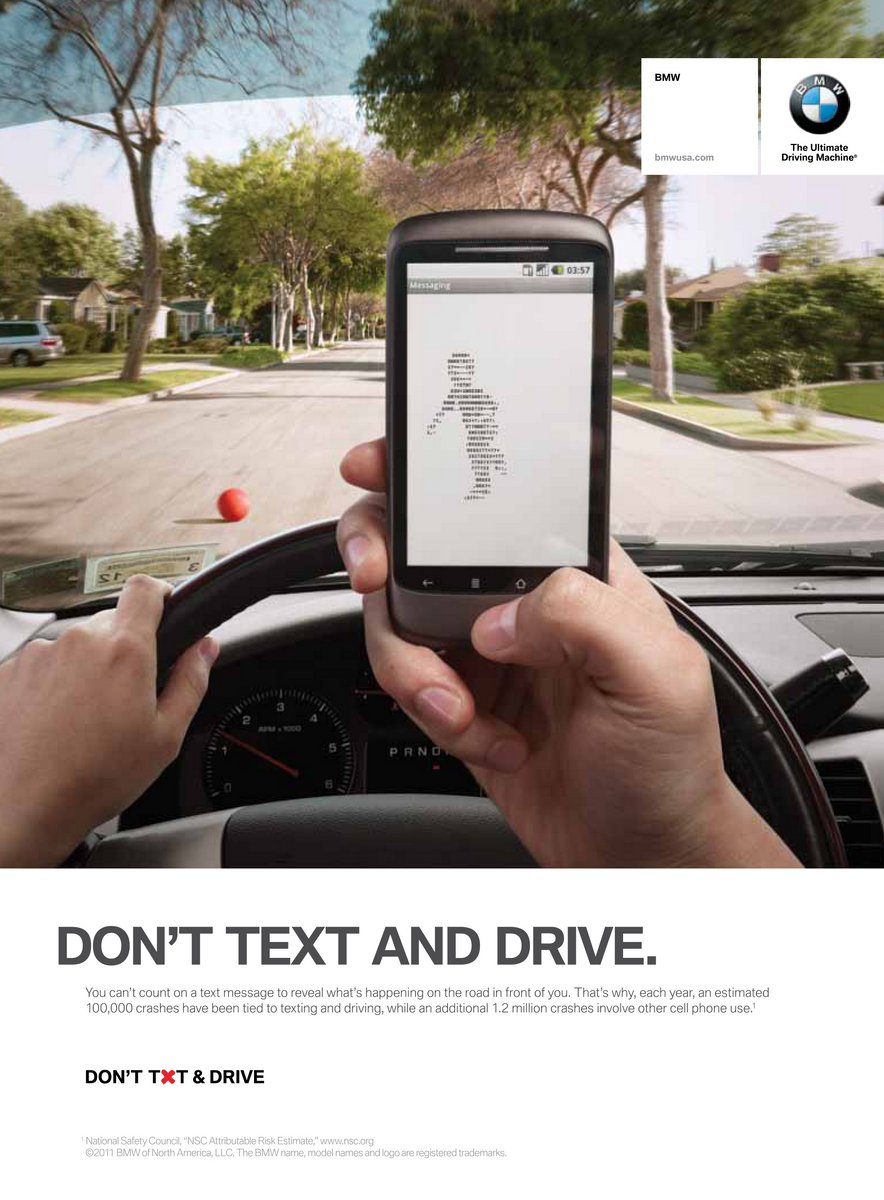 BMW of North America today announced a national campaign comprised of television, print, online and radio advertising and a strong in-dealership message, all timed for the summer season and designed to raise awareness of the dangers of distracted driving. The campaign, themed “DON’T TXT & DRIVE – When the Engine Starts the Texting Stops,” begins in early June and runs throughout the year.

“Distracted driving is an epidemic in America, and it has deadly consequences for thousands of people on our roads each year,” said U.S. Transportation Secretary Ray LaHood. “Putting a stop to these needless deaths, as well as hundreds of thousands of injuries, will require everyone to take personal responsibility for safe driving. I am grateful to BMW for their efforts to raise public awareness about distracted driving and for urging drivers to put down their phones and focus on the road. I hope that other automakers will follow their lead.” 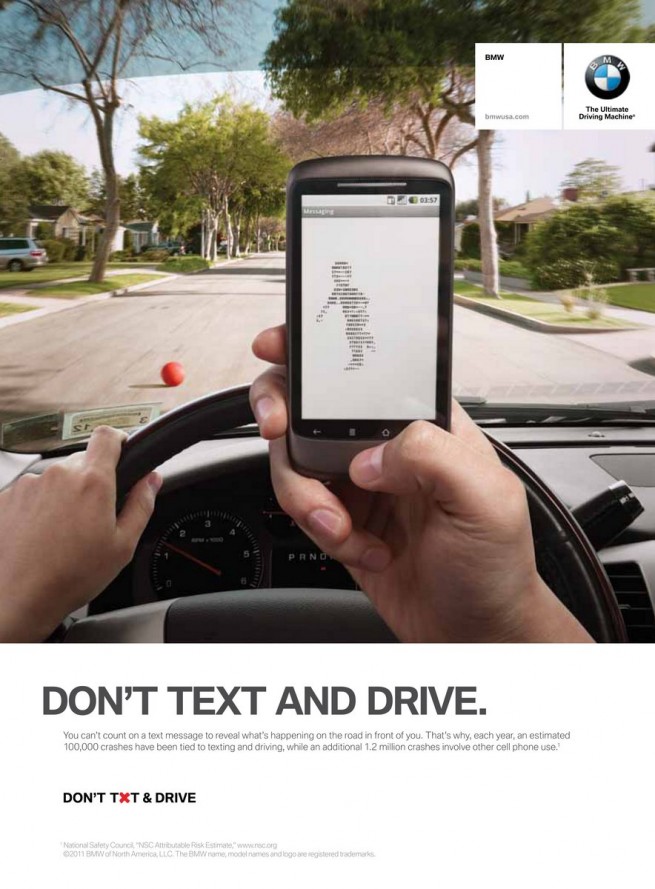 Television creative illustrates the contradiction between being an overprotective parent and the carelessness of texting while driving. The spot juxtaposes imagery of an overly cautious father bathing his son with the added protection of water wings and goggles, and a mother obsessively putting hand sanitizer on her child’s hands; with the final scene pointing out how all of that can be undone in a second as a mother picks up her phone when a text message is received while her child is strapped into a car seat behind her.

It closes with a scene of another car racing toward them before the mother looks up and realizes what is about to happen. The screen cuts to black and displays the tagline, “Your Family’s Safety is in Your Hands. When the Engine Starts, The Texting Stops.”

“Distracted driving of any kind, especially texting while driving, is an extremely dangerous activity that costs thousands of lives every year,” said Jim O’Donnell, CEO, BMW of North America. “We developed this campaign to be impactful in hopes of evoking emotion and conveying the serious dangers of distracted driving and its potential consequences.”

Variations of print advertisements feature views of the road from distracted drivers’ perspective. In one, a texting driver’s view of a young child running onto the street is obstructed by their smartphone. The only evidence of the child’s presence is the outline of his shape and the ball he is chasing appearing on the phone as if the phone wasn’t hiding him from view. Others obscure a deer in the road and truck turning in from a side street, suggesting the preoccupied driver is about to crash.

In online advertisements, the words “TEXT MESSAGING IS VERY DISTRACTING” appear in bold, block letters across the homepage of websites making it difficult to read and demonstrating how texting while driving interferes with a driver’s field of vision.

At the BMW Performance Center in Spartanburg, South Carolina, the company’s Teen Driving School has trained more than 3,000 young drivers over the last 10 years to help them safely and properly handle their vehicles. The program continues this year.

The DON’T TXT & DRIVE message will be incorporated in more than 100 teen driving schools conducted across the United States this year by the BMW Car Club of America Foundation.

BMW dealerships will feature printed materials, hangtags and static cling decals for display in vehicles and showrooms throughout the summer.

In December of 2010, as part of his initiative to meet with auto manufacturers on the subject of distracted driving, U.S. Transportation Secretary Ray LaHood met with BMW of North America CEO Jim O’Donnell to discuss actions both organizations were taking. BMW was already active promoting Don’t Text and Drive through its Teen Driving School, and was inspired to develop more comprehensive actions, including the advertising campaign.

U.S. Department of Transportation statistics show nearly 5.500 people died in crashes in 2009 involving a distracted driver, while the National Highway Traffic Safety Administration found 87 percent of teen drivers admit to texting while behind the wheel. These statistics provided BMW with ample motivation to get behind this cause and develop the actions the company is now announcing.

As a leader in technology, BMW continues to use research and innovation to develop systems that enhance safety and convenience while further eliminating distraction.

For example, the company uses a method called pupilometry to define the movement of one’s eye between information inside the vehicle and the car controls. This helps defines the placement of information to allow maximum attention on the road and the ability to monitor systems.