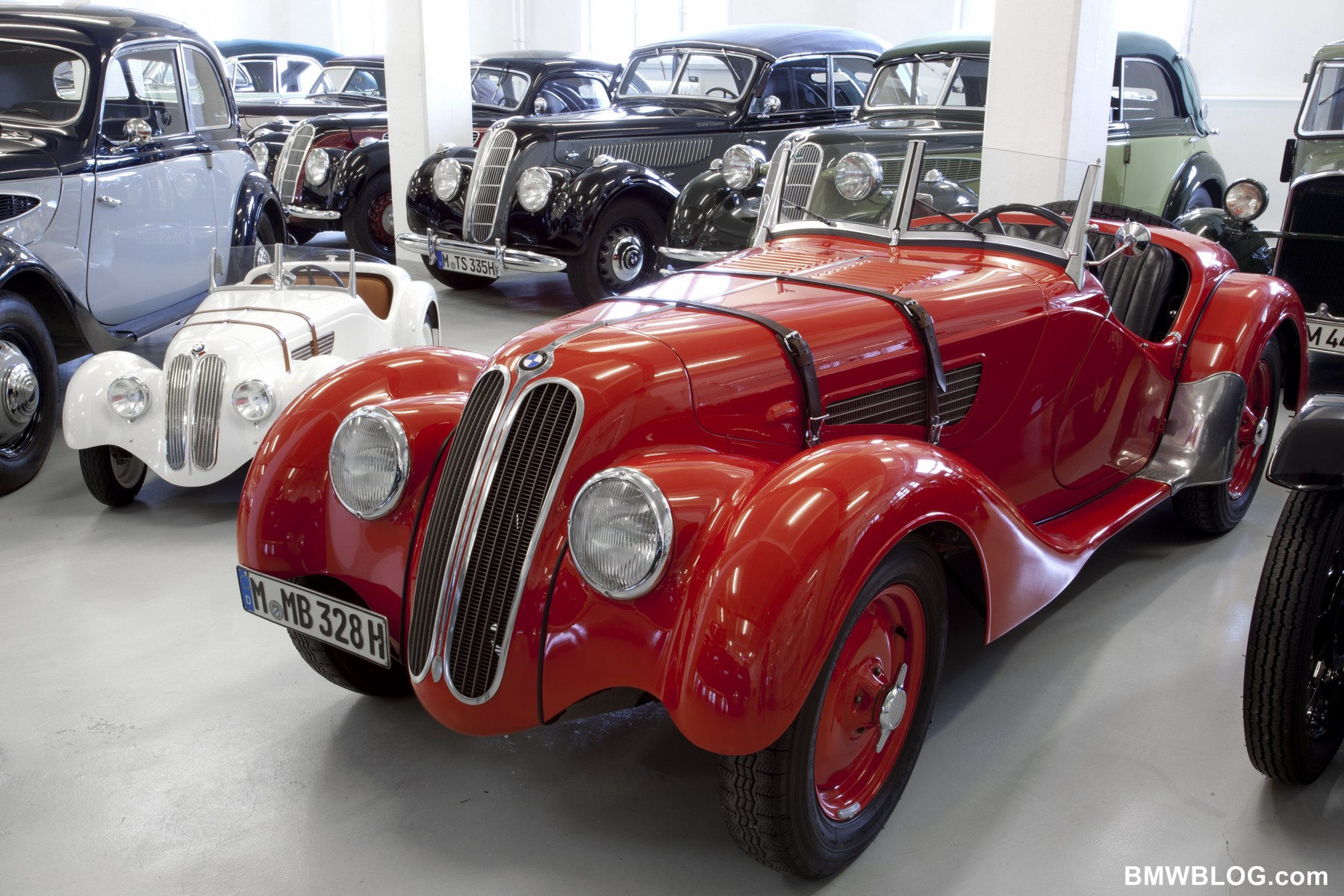 Munich, Germany – The last stop for me on Innovation Day was a walk from the FIZ on BMW-Allee to the BMW Classic facility. Located on Schleissheimerstrasse, the multi-story building houses pieces of the BMW collection that are not on display in the museum, corporate archives, and vehicle workshops. BMW Classic used to be called BMW Mobile Tradition and it was primarily an in-house restorer and maintainer of BMWs owned by the corporation.

That role has changed however. As appears in the BMW Classic press release, “BMW Group Classic coordinates all the activities of the BMW Group which are associated with the history of the company, its products and three brands. The relevant classic activities of BMW, MINI and Rolls-Royce are unified under the auspices of BMW Group Classic. The platform is formed by the classic mainstays of museum, archives, club support and the BMW Centre, as well as event organisation and specific classic communication. Classics from the BMW Group’s own collection are not simply housed in the museum, they are on the road at events throughout the world. 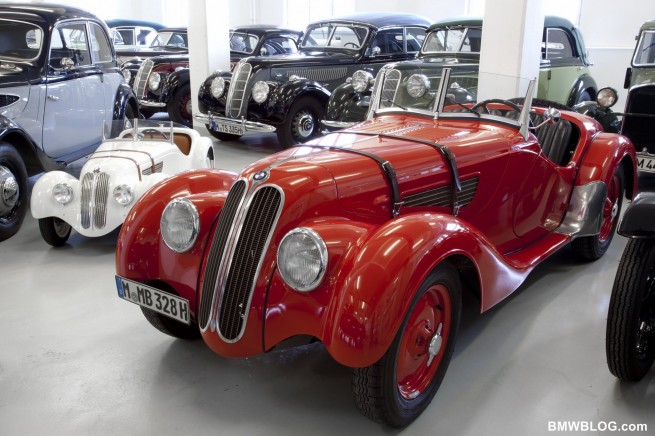 “The BMW Classic Centre has been available for friends of the BMW brand since autumn 2008. The big advantage for customers who take their vehicle to the original manufacturer is complete service from a single source. The Classic Centre possesses the theoretical knowledge of the vehicles, the technical know-how, the original BMW parts and the infrastructure necessary to integrate all these aspects systematically. Classics in immaculate condition have been sold since autumn 2010 alongside the service and restoration activities. ”

So they now work on customer vehicles. And they have the resources to do that are better than any independent shop. They have the technicians, the parts, and the know-how (including their extensive archives) to restore pre-war, and more frequently, post-war BMWs. While the facility in Munich is limited in total space, they are rolling out the notion of a project “Customer Workshop” in other locations around the world in conjunction with top flight local facilities. And they not only work on classic road going cars and motorcycles, but racing vehicles also.

But that building on Schleissheimer Strasse is still the heart of the enterprise. Herr Florian Moser was my host for the visit and he met me in the lobby, fresh from my day at the FIZ, and gave me a rundown of the BMW Classic’s activities. We did not have an opportunity to view the meeting space and vehicles on the ground floor (one of which was a BMW 303 – the first BMW with the kidney grilles) due to a tour arranged for a club using the meeting facility. Nor did we stop at the archives located on the first floor (second floor to us ‘mercuns). But we did ascend further up the staircase to the workshops and vehicle holding areas. 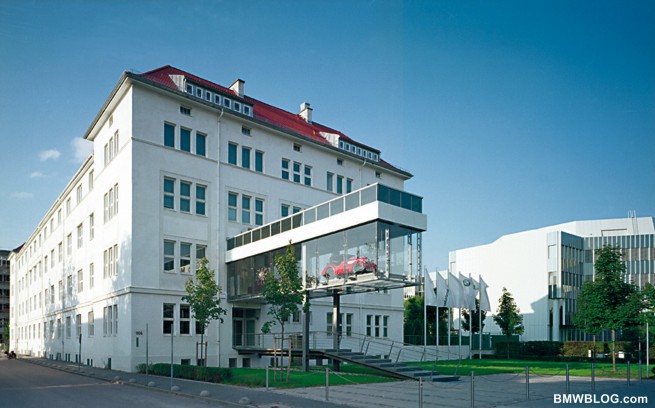 The stairwell is at the front of the building and is fairly well isolated from the environment of the individual floors. I noticed no old paper smell (a smell that book lovers recognize in the faintest
concentration) as we hit the first floor landing. And then we moved up to the story that housed the road-going cars, and Herr Moser opened the door. And it hits you. The perfume that petrol heads the world over embrace, gasoline and lubricants. I stood there and breathed deeply, carcinogens be damned, I was going to indulge my nostrils in that delightful odor. And with a smile and a sigh, I looked back at Herr Moser, who smilingly said, “We know who the gear-heads are when we open the door.”

And as good as the olfactory welcome is, the visual treat is beyond belief. Arrayed throughout the room are cars and motorcycles that speak directly to the evolution of BMW. Pre-war cars, a handful of immediate post-war cars (including a 700) and then the Neue Klasse cars, 2002s, legions of 3ers, 5ers, and 7ers. An odd duck or two thrown in for good measure. And then there’s the true odd duck, the 16 cylinder 7er, the motor of which is known as ‘Goldfish’. How difficult is it to cram 16 cylinders in a 7er,? Well, they had to put the radiator in the rear and there is a cyst like bulge on each rear fender to scoop air into the car. 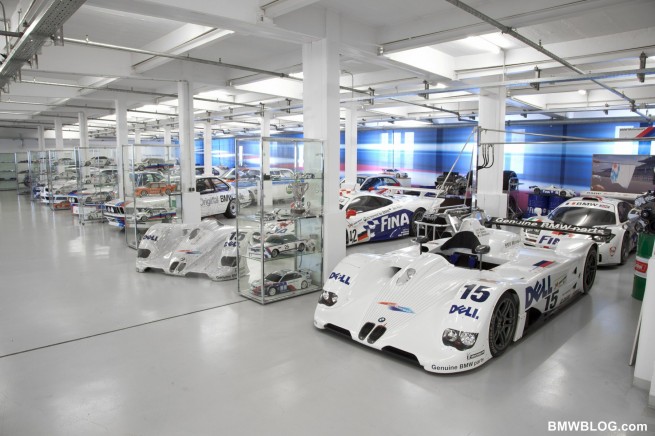 As great as that floor is, moving to the third floor, opened up the M, for motorsports, collection. Here, in one room are as many McLaren F1 cars as you’ll see gathered in one place outside of a Concours d’Elegance. And there’s an N12/13 engine for a Brabham F1 car, presumably a BT-52 (the B in the car designation stand for Brabham and the T stands for Sir Jack’s designer, Ron Tauranac). GT cars, racing M3s, DTM machines and record run motorcycles are everywhere you look. The on-track history this place holds is extra special to bimmerphiles.

In addition to the cars housed on the 2nd and 3rd stories, each story also has dedicated work spaces that are used to maintain and rebuild cars. And now, with its expanded mission, BMW Classic can resurrect your dream historical BMW, whether it’s a pre-war 328 or a 3.0 CSL Batmobile. Truly a special place and mission. 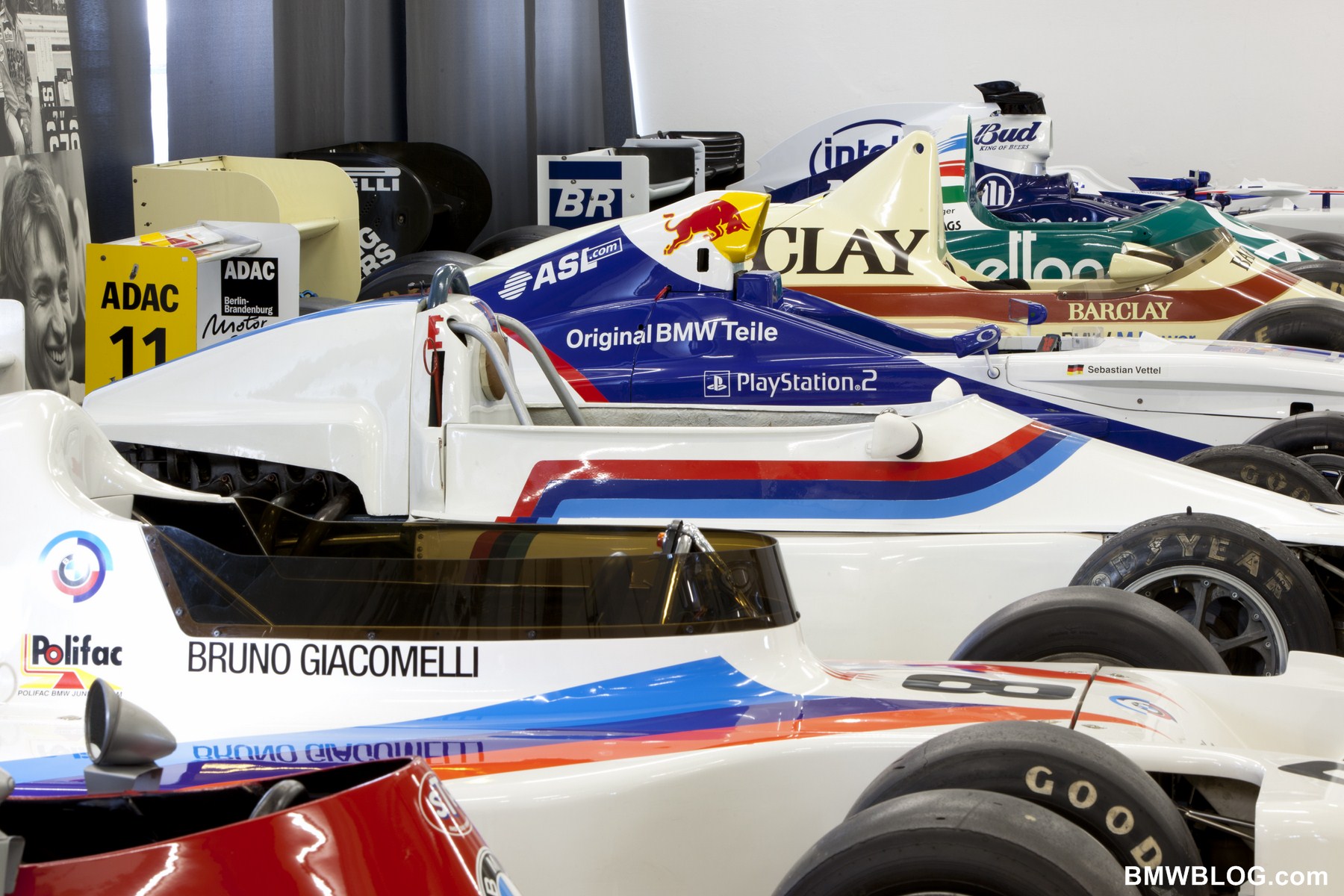 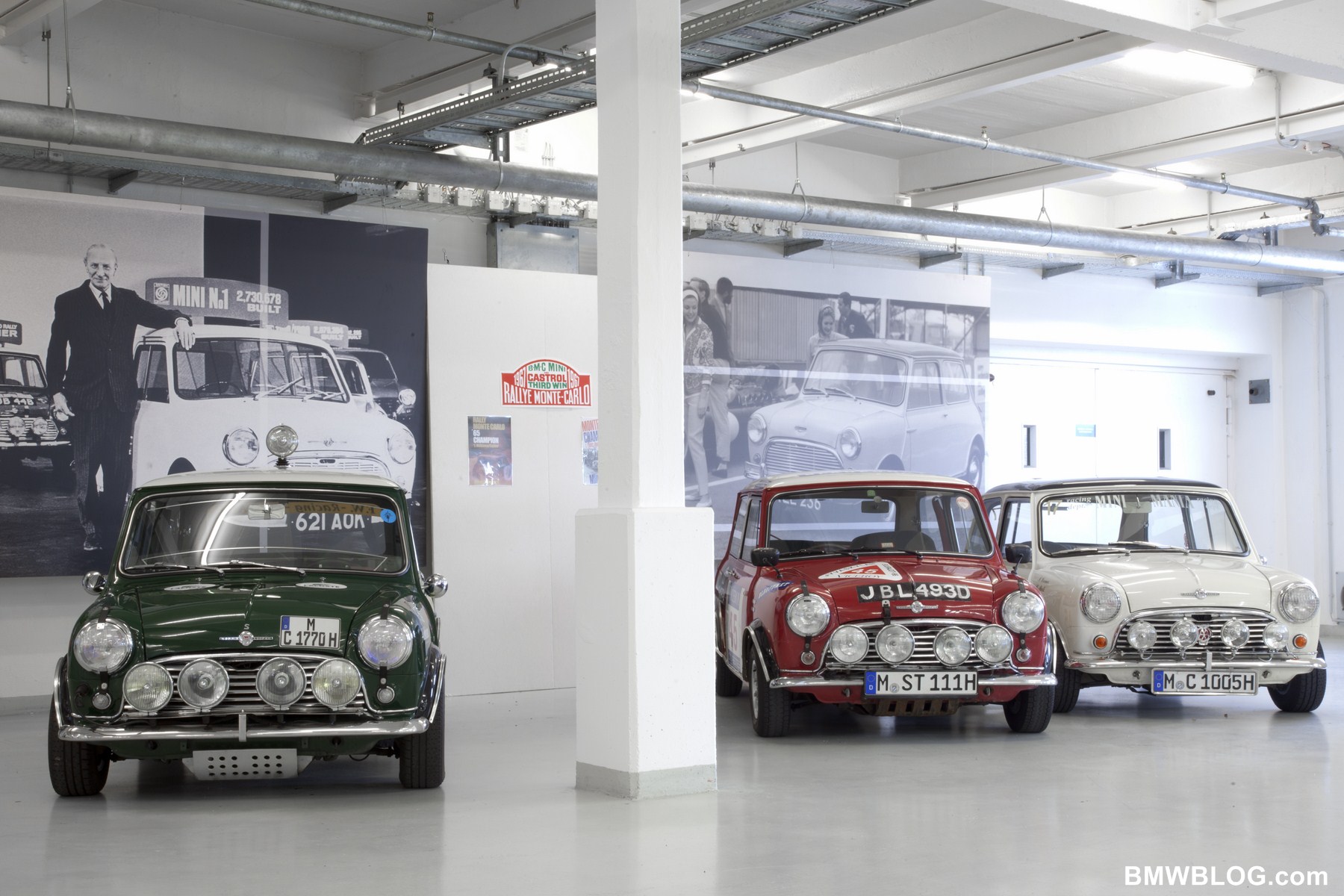 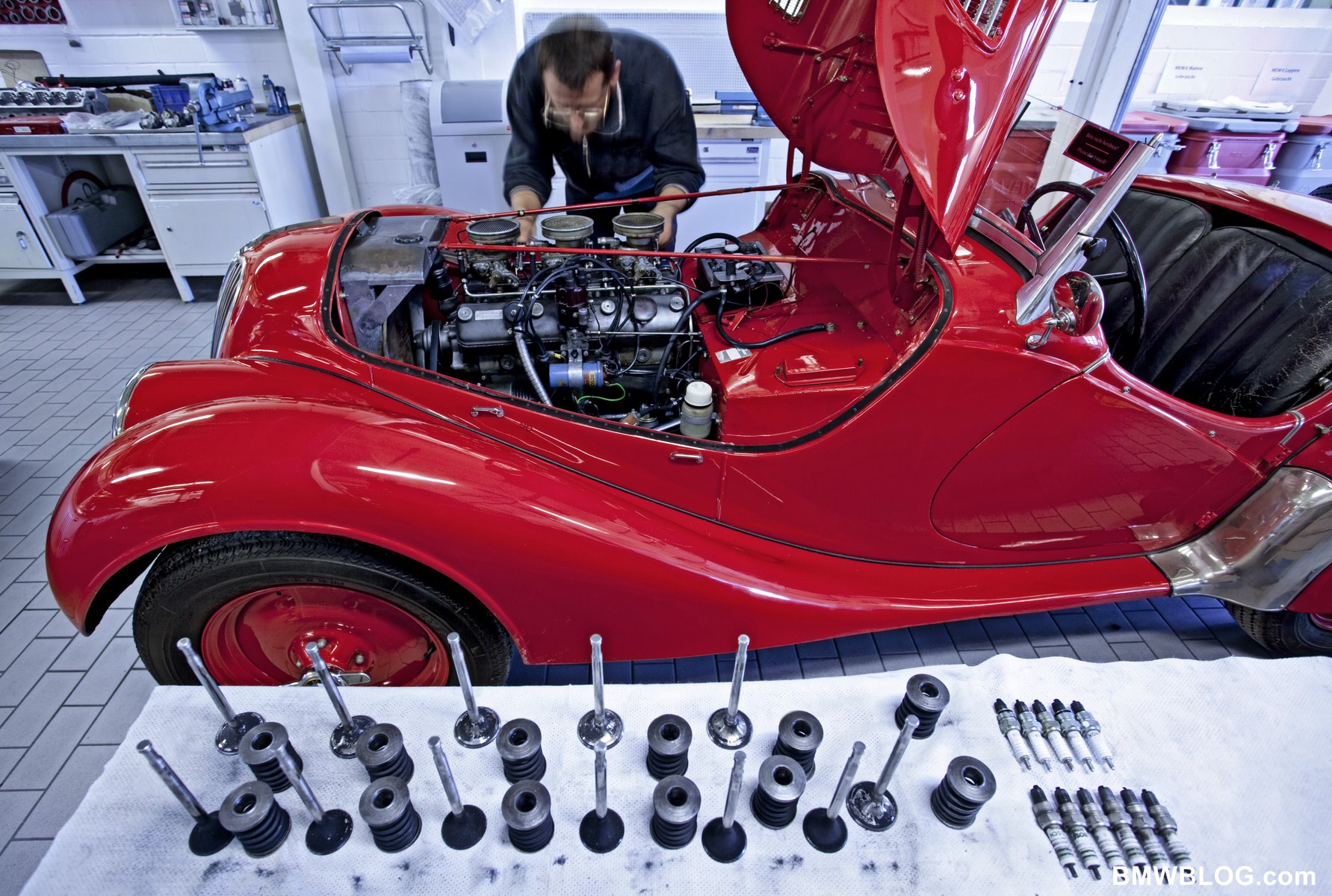 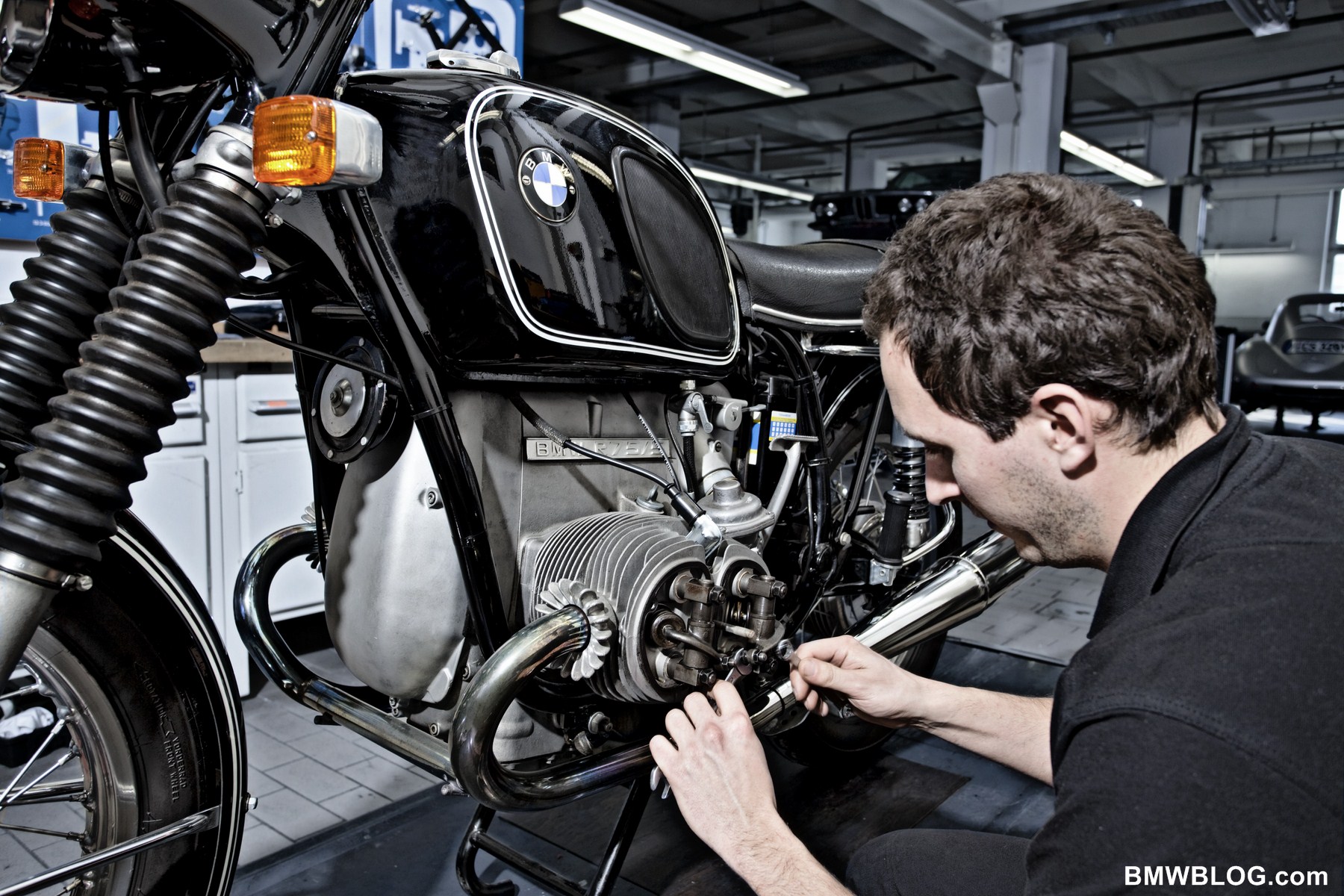 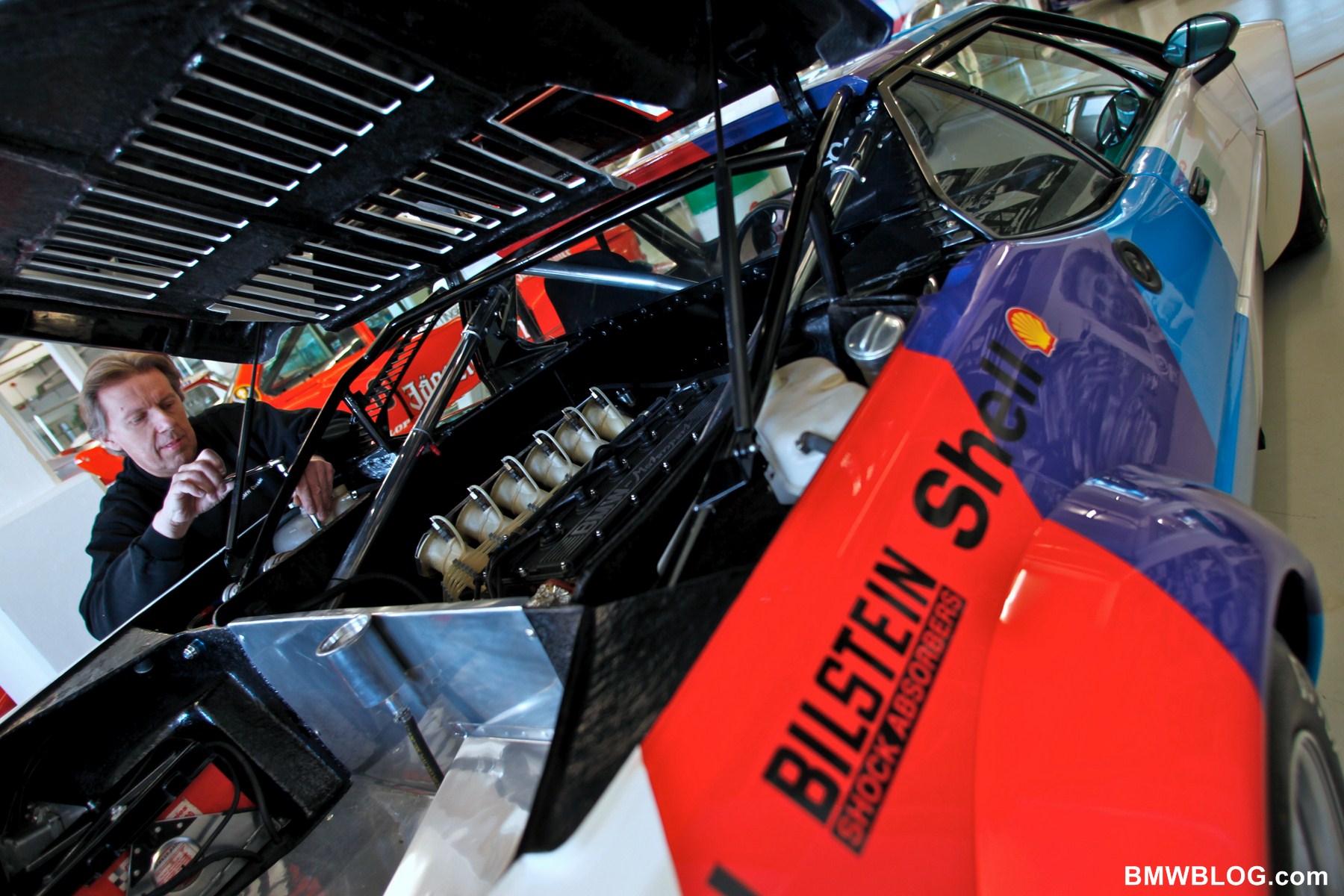 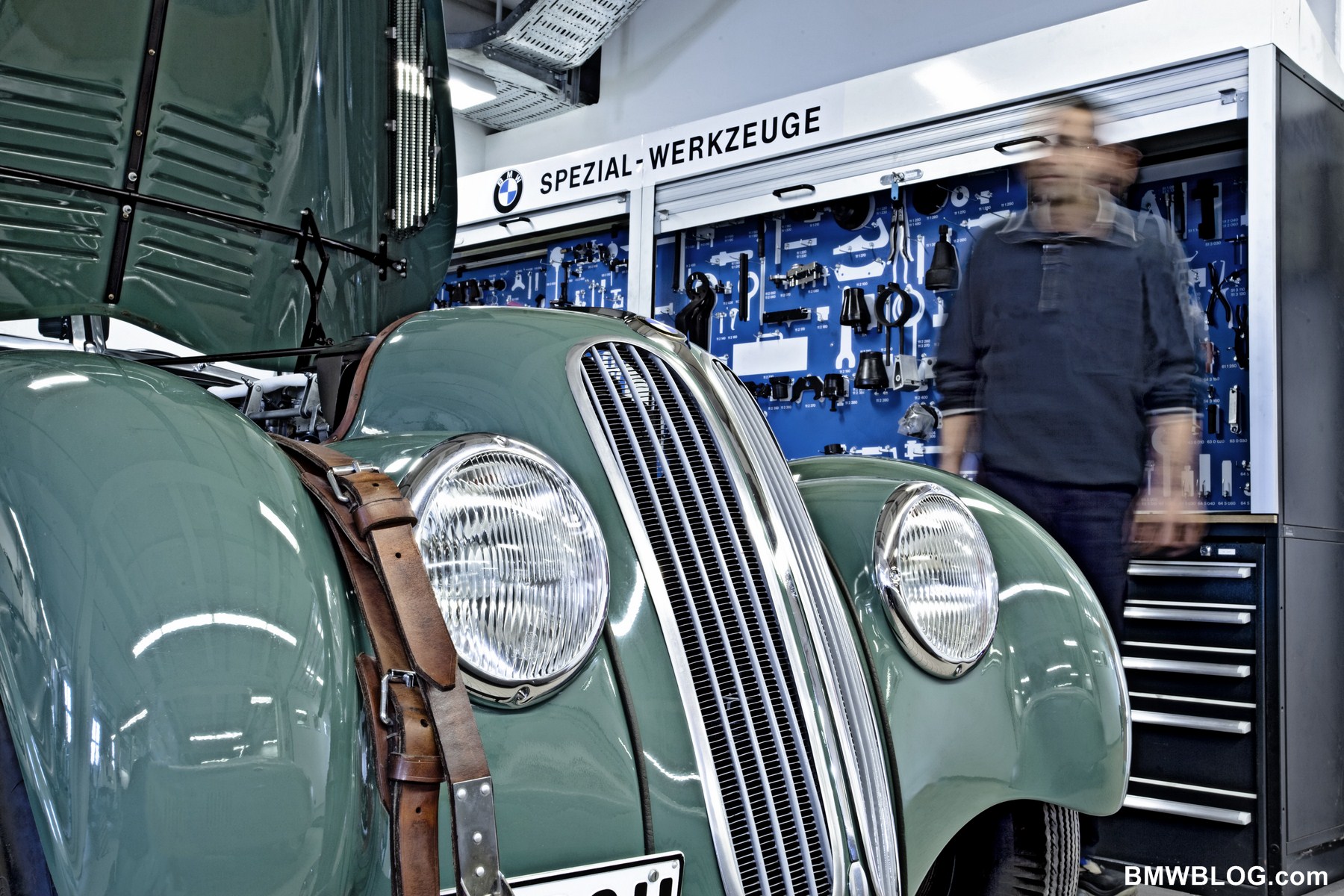 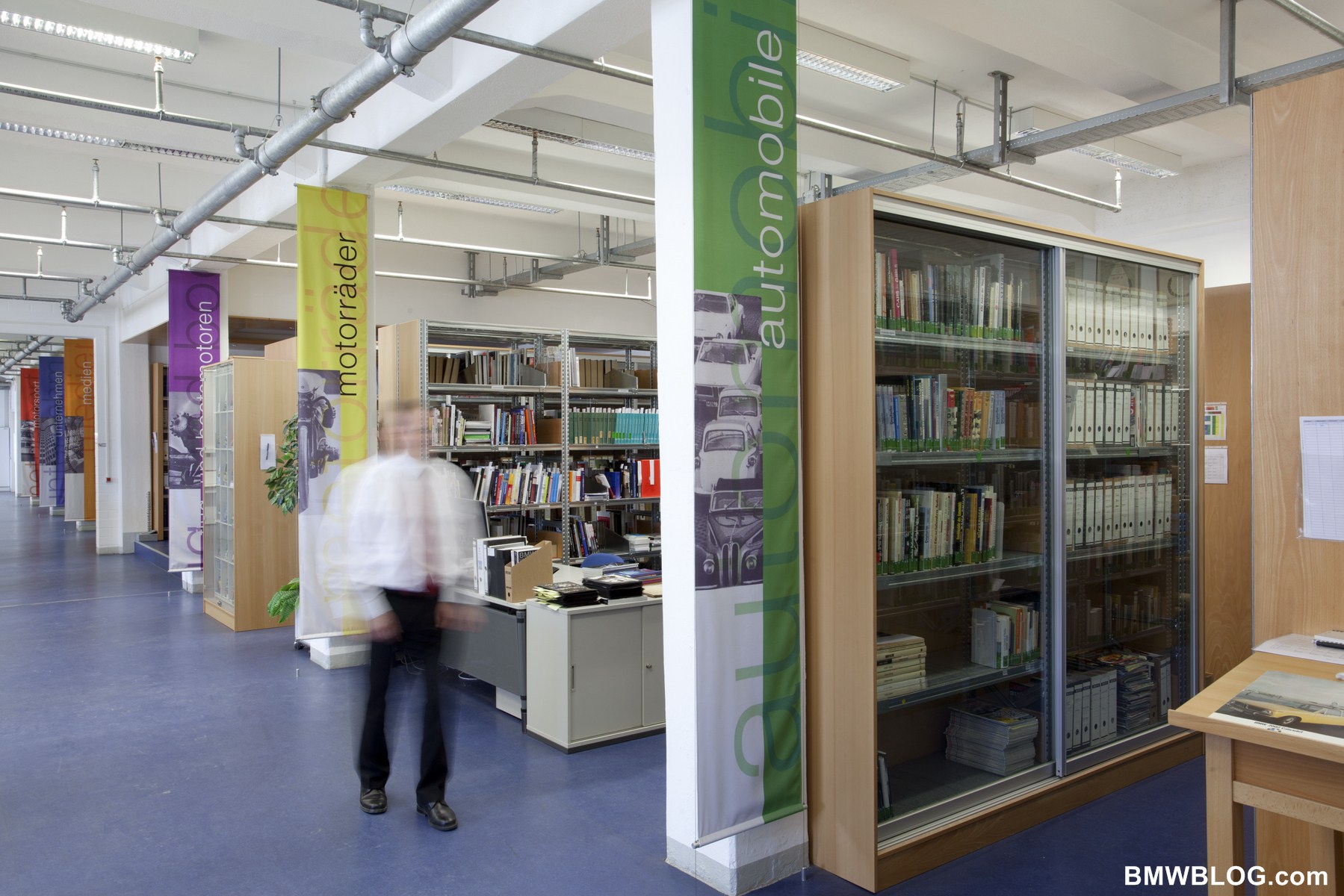 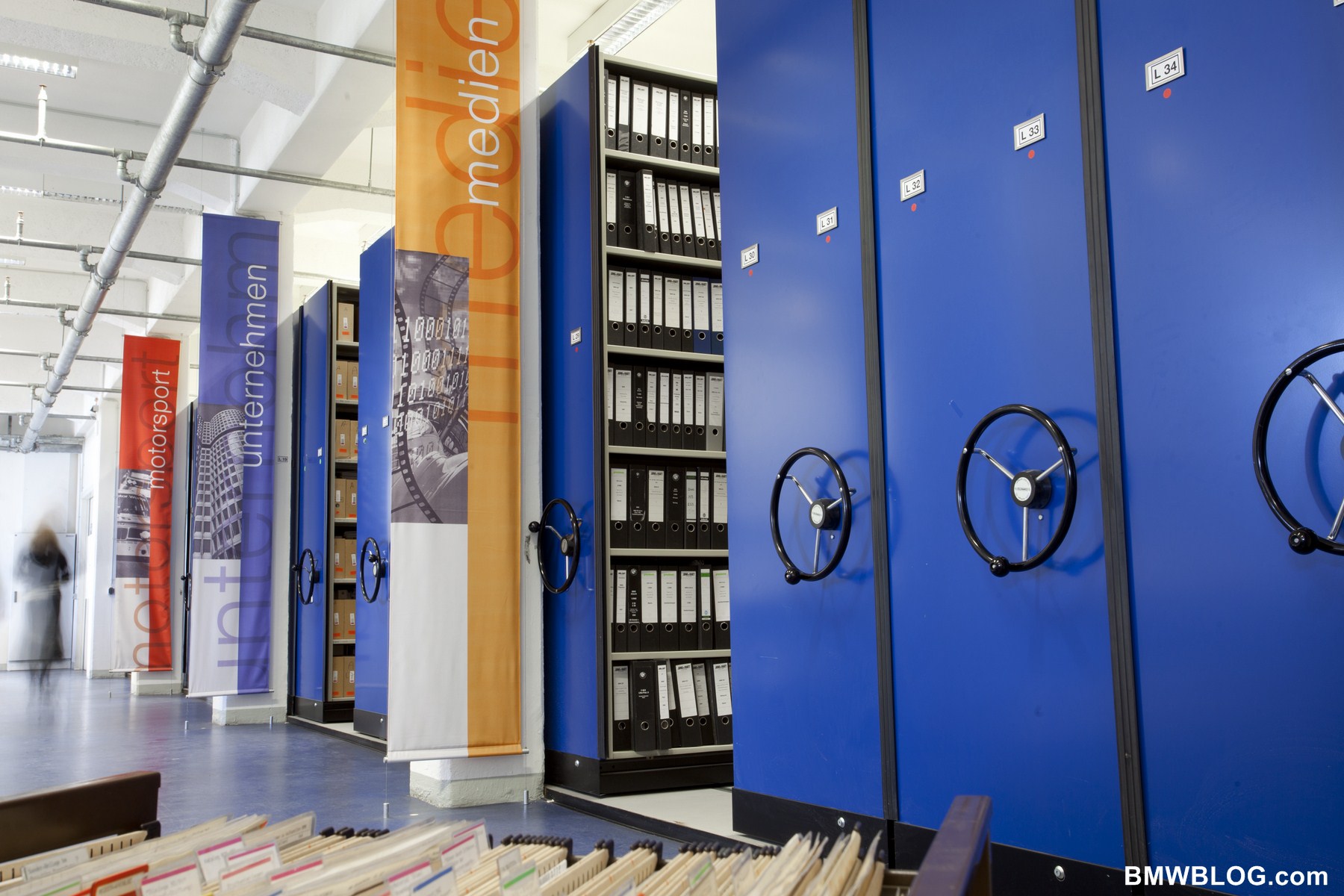 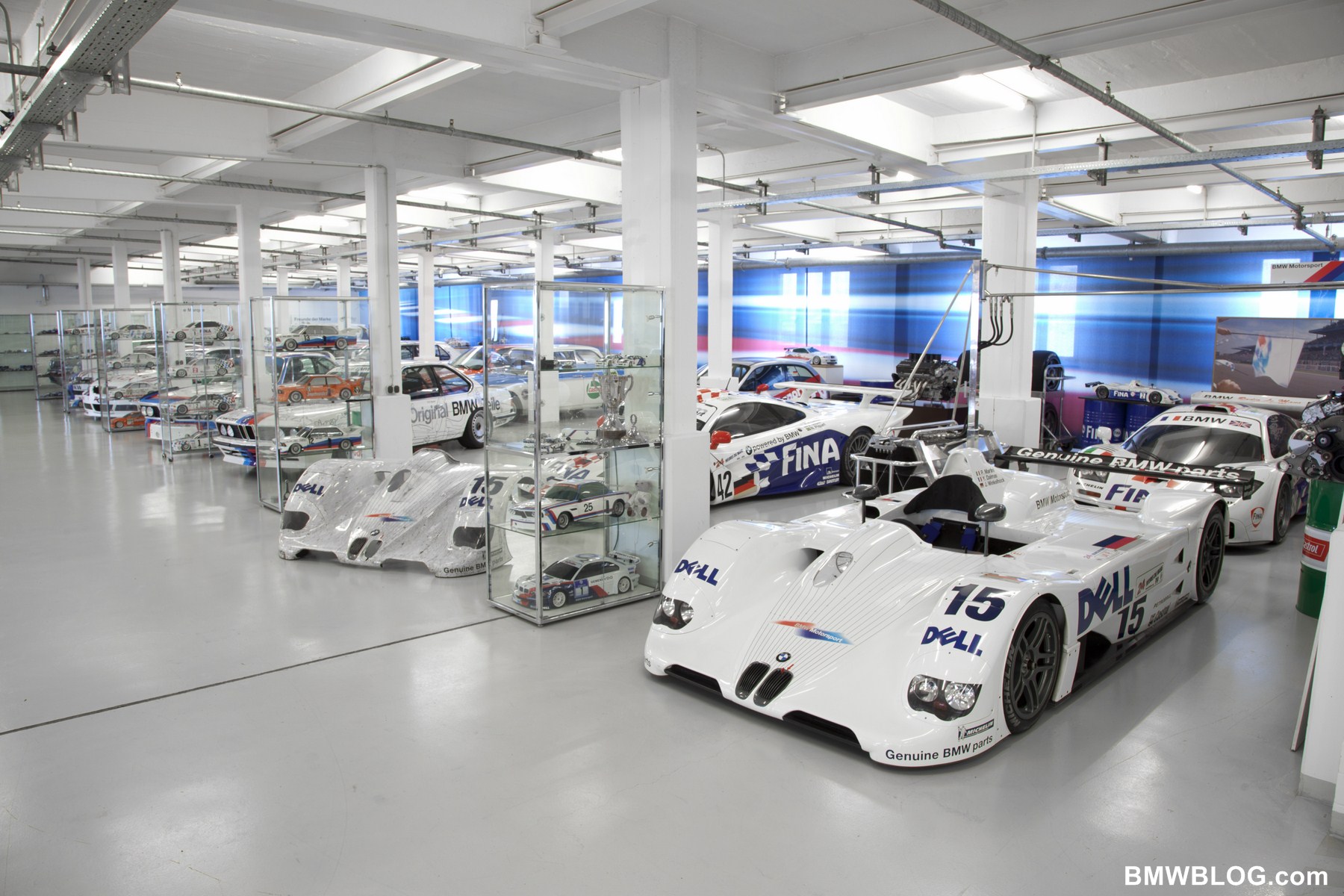 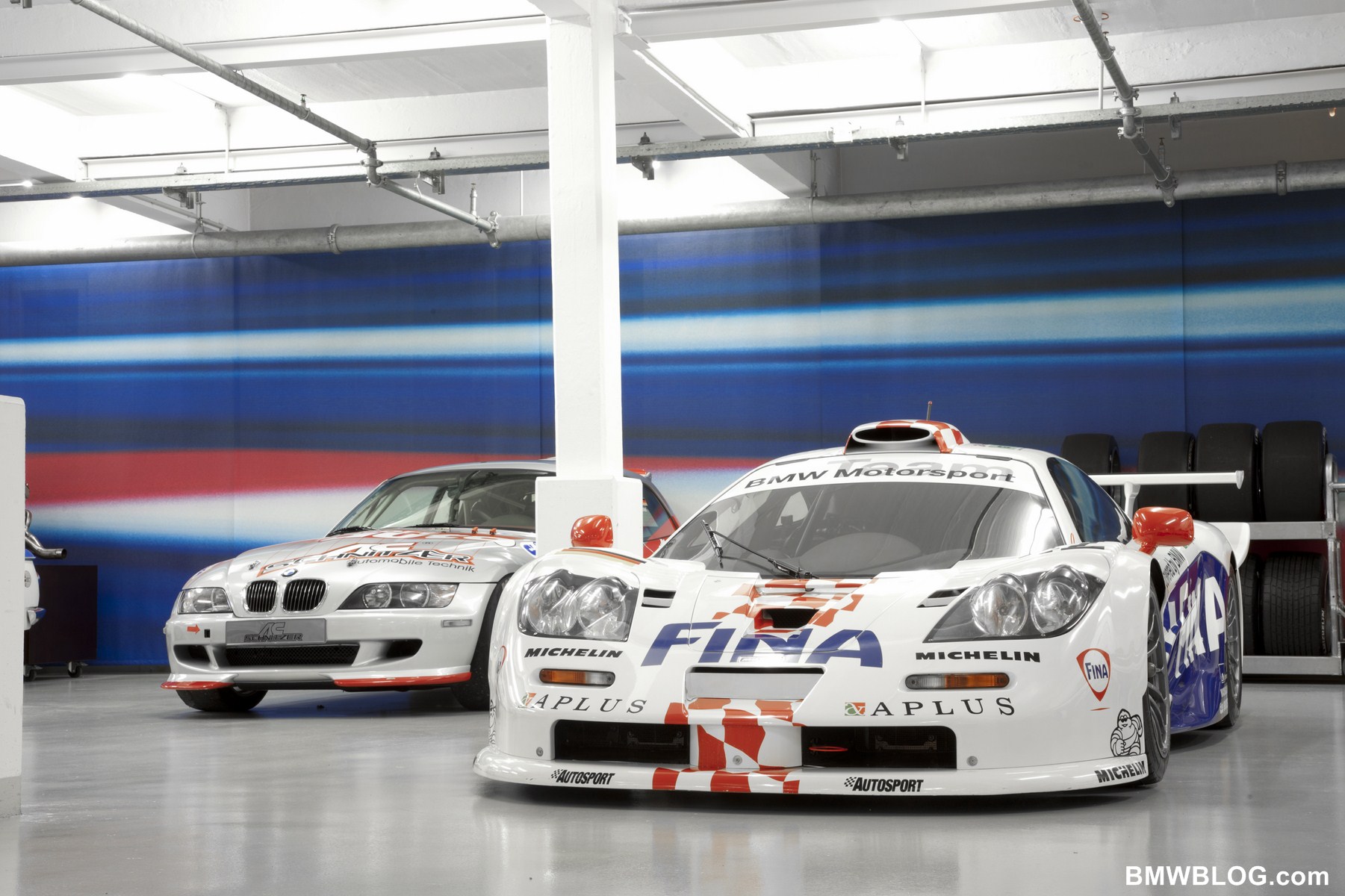