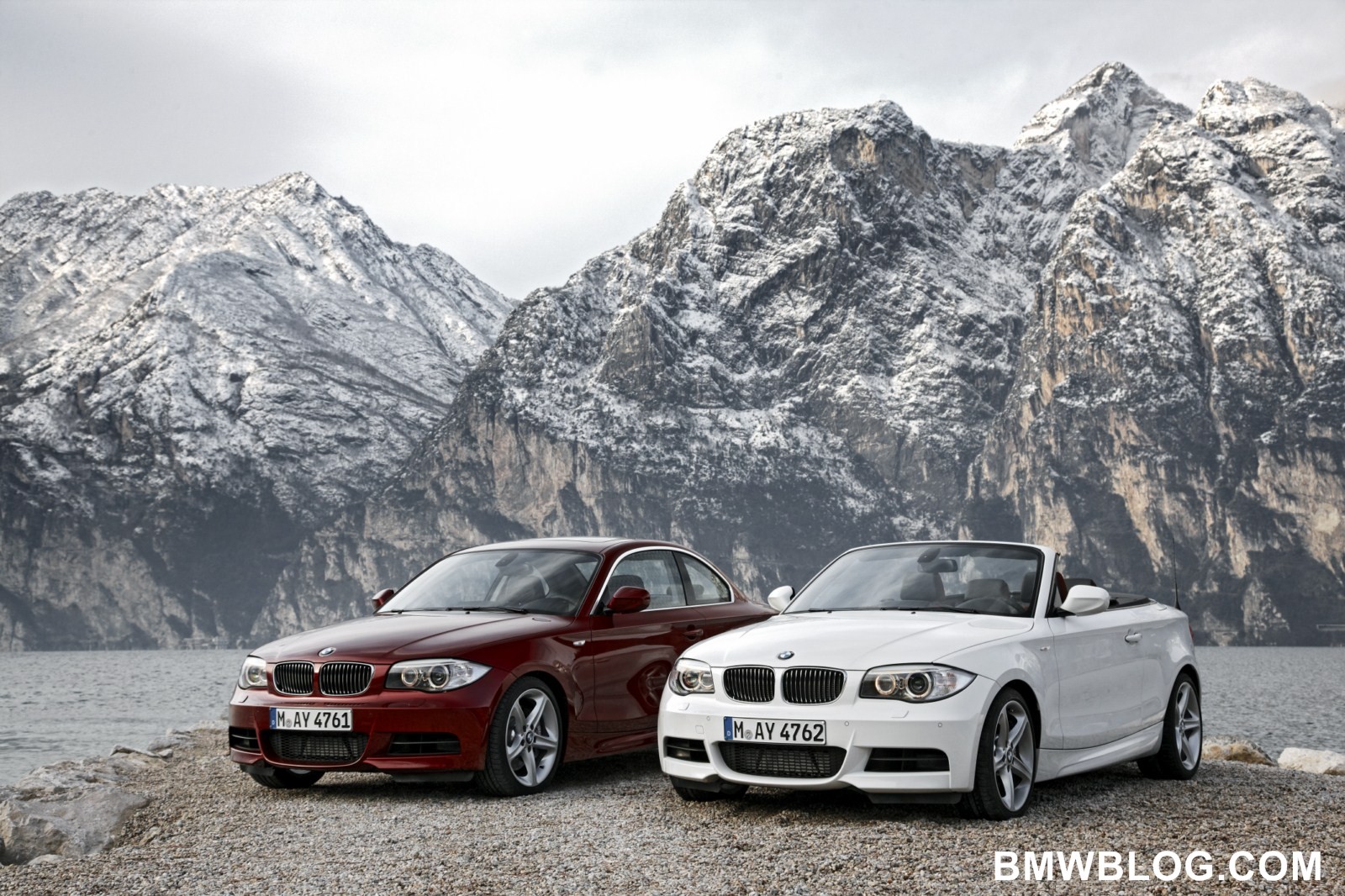 Press Release: BMW will unveil two stunning signature cars at the North American International Auto Show in Detroit in January. The dazzling new BMW 650i Convertible will make its World Premiere along with the all-new BMW 1 Series M Coupe, which will shift the paradigm in the small performance car category. The updated BMW 1 Series Coupe and Convertible will also make their World Premieres.

BMW 6 Series Convertible
The new BMW 650i Convertible fulfils the wishes of the most discerning automotive enthusiast as The Ultimate Driving Machine® with groundbreaking luxury and crisp good looks. In the premium convertible market, the 650i offers the most advanced chassis technology as well as most innovative comfort, infotainment and safety features. A sweeping hood, aft-set passenger compartment, long wheelbase and muscular profile embody the hallmark proportions of a BMW Convertible.

The new BMW 650i Convertible combines these features with a classic soft-top roof with flying buttress design. Powerfully contoured surfaces promise the anticipated BMW driving experience. The luxurious ambience of the interior is highlighted by a driver-oriented cockpit which wraps the front and rear passengers in a feeling of aesthetic security. 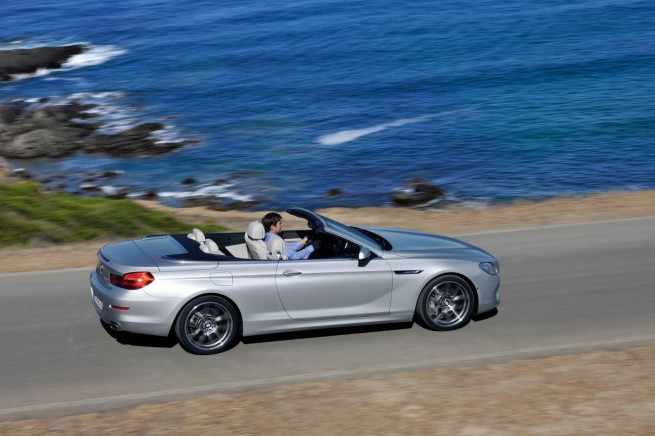 The 8-speed Sport Automatic transmission fitted to the new BMW 650i Convertible boasts a perfect blend of speed, flexibility, sportiness, and efficiency. The driver can choose to select gears manually via shift paddles on the standard Sport leather steering wheel. Befitting The Ultimate Driving Machine®, the 650i Convertible will also be available with a six-speed manual transmission.
The new 650i Convertible will go on sale in the spring of 2011 as a 2012 model for the United States.

BMW 1 Series M Coupe
The M badge was awarded to the 1 Series Coupe after BMW M engineers and test drivers achieved the exceptional power delivery and the signature, near-perfect driving behavior of a BMW M car.

Dimensions and Construction
The new 1 Series M Coupe features a high-strength steel unibody, with unique, widened fenders and rear quarter panels to house a substantially widened track. It also features a metal roof panel which saves about 35 lbs compared to BMW 1 Series models equipped with a moonroof. The 2011 BMW 1 Series M Coupe, constructed as one of BMW’s most performance-oriented vehicles in recent years, will not be offered with a moonroof. This weight savings – at the tallest point of the vehicle – provides a corresponding drop in the center of gravity, which contributes to improved driving dynamics. It also helps maximize head room (or helmet room, as the case may be).

Engineering a chassis to be “faster than its engine.”
Providing sure-footed responsive handling for a high-performance, powerful and luxurious coupe, while keeping mass under control, presented numerous challenges for BMW M’s engineers. The result is an aluminum suspension originally conceived for the current-generation M3, and tuned specifically for this model at BMW M’s Nurburgring Nordschleife test center. Of course, every BMW design begins with arranging major components in a way that facilitates near-perfect front/rear weight balance (51.7/48.3).

Engine and Transmission.
The heart of every BMW is the engine, and so an inline-6 with outstanding performance and free-revving behavior propels the BMW 1 Series M Coupe. In the 1 Series M Coupe, the BMW inline-6 engine concept is realized in its most up-to-date form. The twin-turbocharged, all-aluminum, 3.0-liter inline-6 is characterized by instantaneous response to the accelerator pedal, fantastic sounds, and a free-revving spirit. A close ratio 6-speed manual transmission sends power to the rear wheels in the BMW 1 Series M Coupe

Innovative Aerodynamics: Air Curtains.
Consistency between form and function is crucial to engineers at BMW M, who seek perfect balance of various aerodynamic factors in the wind tunnel. As a result, the 1 Series M Coupe has been equipped with BMW’s latest aerodynamic innovation. Air curtains, used here for the first time in a BMW production vehicle, improve air flow around the wheel arches with the benefit of significantly reduced turbulence.

The 2011 BMW 1 Series M Coupe will be available in limited quantities and with a limited range of options at Authorized BMW Centers in Spring, 2011. 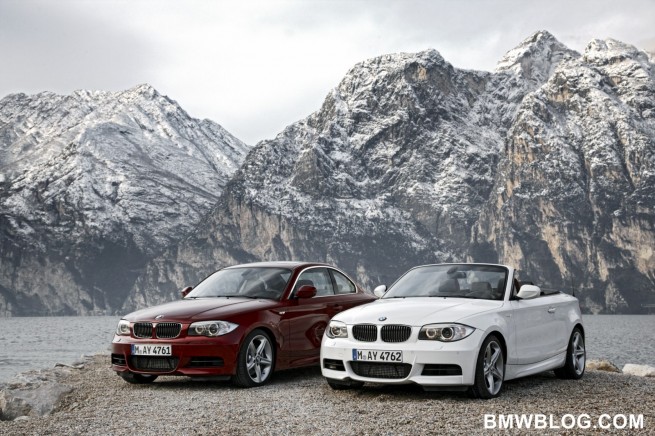 Updated BMW 1 Series Coupe and Convertible
The unmistakable profile of the 2012 BMW 1 Series, which represent the purest expression of BMW DNA, is now sharper than ever. The new design of the front fascia of both models includes BMW’s innovative Air Curtain that counters turbulence near the wheel arches and so reduces the aerodynamic resistance of the vehicle. New exterior design accents have been incorporated into the headlight and tail light clusters. In the interior, new switches and controls have a more refined look and feel. The updated 1 Series Coupe and Convertible will go on sale this Spring.

With these updates, the BMW 1 Series Coupe develops further as one of the most desirable Ultimate Driving Machines® in the business. Two versions are available: the 128i Coupe and the 135i Coupe. Each has been enhanced to improve convenience and comfort for the 1 Series’ fourth model year in the US.

BMW 1 Series Convertible
For drivers whose definition of Joy includes wind in the face and sunshine above, the BMW 1 Series Convertible continues the tradition established by the iconic BMW 2002 sport sedan. The essence of such driving purity – a responsive inline-6 engine perfectly positioned within a rear-drive chassis to provide balanced, sporty dynamics – is at the heart of this compact four-seat convertible. For the 2012 model year, two versions are available with inline-6 power: the 128i and the 135i.

Distinctive BMW Convertible appearance
In a mere 22 seconds—even on the move at speeds up to 25 miles per hour—occupants of the 1 Series Convertible can go from encapsulated comfort to top-down exhilaration. If conditions dictate, the electro-hydraulically-operated softtop can be raised within the same 22 seconds, producing a distinctive silhouette enhanced by long frameless doors. The characteristic features of the BMW kidney-shaped grill, front skirt, door sills and rear skirt are identical to those of the 1 Series Coupe.

The standard softtop is available in either black or taupe cloth, but it is the optional Moonlight Black version which is unique to the 1 Series Convertible. A distinctive feature of the 1 Series Convertible is the flared shoulder line which runs parallel to the road. This shoulder line flows from the hood past the A pillar to the trunk lid, forming a surface which encompasses the entire interior, giving the impression of a boat deck.

The view from the rear is influenced by the position of the softtop: with the top lowered, completely concealed in the tail, the look is flat and elegant; the appearance with the top up is broad shouldered. The trunk lid has an integrated spoiler chiseled into the rear end of the car to accentuate the short rear section. On the 135i, an additional lip spoiler provides greater downforce on the rear end at high speeds.

BMW ConnectedDrive: new interface for the integration of iPhone apps.
The 2012 1 Series Coupe and Convertible will be the first BMW models to offer selected iPhone applications for even greater integration in the vehicle. This interface for the first time allows features such as Facebook, web radio and Twitter to be shown on the vehicle display and accessed using the iDrive Controller. This new as yet unmatched capability enhances the already extensive BMW ConnectedDrive package of features and sees BMW once again underline its leading role in the field of in-car integration technology designed to enhance both convenience and safety.