Rumor: Next generation X5 to feature a hybrid drivetrain with four-cylinder engine

Home » Rumor: Next generation X5 to feature a hybrid drivetrain with four-cylinder engine

Next generation BMW X5 is due out in 2013. The F40 platform is rumored to feature a modular design, a common trend in future BMWs, that allows the company to achieve significant savings across its line-up. Palbay, the restless spy photographer covering the outskirts of Spartanburg, managed to snap some shots of an interesting prototype. While at a first glance the photos don’t seem to reveal much, a closer look might give extra insight.

The prototype used is E70 model, prior to its life cycle impulse received earlier this year. The test mule seem to be running a towing test, similar to what we have seen in the past, especially in the Death Valley region, one of the lowest point in the Western hemisphere. The depth of the depression is partly responsible for the extreme high temperatures, which can exceed 130°F in summer, a perfect testing setup for many automakers.

According to Palbay, the prototype was running at very low-speeds, 5 to 10 mph, another possible indication of the drivetrain testing.

But things get interesting from here. Scott27 jumps in and delivers some new information around the future F40 X5, with respect to a new hybrid drivetrain. According to the source, yet not confirmed by others, is that the new X5 will feature for the first time the ActiveHybrid technology with a 2.0 liter four-cylinder diesel engine. The internal combustion engine is aided by a 15 kilowatt electric motor that ads another 17 horsepower on top of the 204 already delivered by the diesel power unit.

The drivetrain continues to feature BMW’s xDrive system and the power is sent to all four wheels through a ZF eight-speed automatic transmission.

Furthermore, the new X5 Hybrid is said to use two parallel vehicle electrical systems, a conventional 12 volt system supplied by the AGM starter battery and an additional 120 volt system that’s supplied by a generator and lithium-ion battery pack located in the luggage compartment. Rather than a conventional engine-driven generator, a compact generator is integrated in the aluminum crankcase housing. The high-power electronic system is flange-mounted directly onto the gearbox for a more compact design. Brake Energy Regeneration helps recharging the battery.

Since green is the buzzword these days, same insider mentions a high-power, one-meter square solar panel on the roof of the car provides up to one kilowatt-hour of energy and preheats the transmission fluid to reduce friction during a cold start. After startup, the solar panel helps power accessories, particularly during idle when auto Start/Stop is functioning. During standstill, it is designed to provide electricity for the climate control system, infotainment, phone charging, or the vehicle’s battery charger.

As expected, the X5 Hybrid is said to have specific wheels designed to improve the lateral aerodynamics. The aerodynamic shaping of the spokes reduces rim ventilation power requirements by one kilowatt at 100 mph.

Ready for our opinion? We believe these are simply speculations at the moment, but without a doubt, BMW will prepare a future hybrid drivetrain in their top-selling X-vehicle. Would it be a four-cylinder engine? Or the six-cylinder used in the X6? Again, unclear at the moment and most likely the testing program will decide the most feasible solution.

For now, let’s table these as rumors and wait for further information. 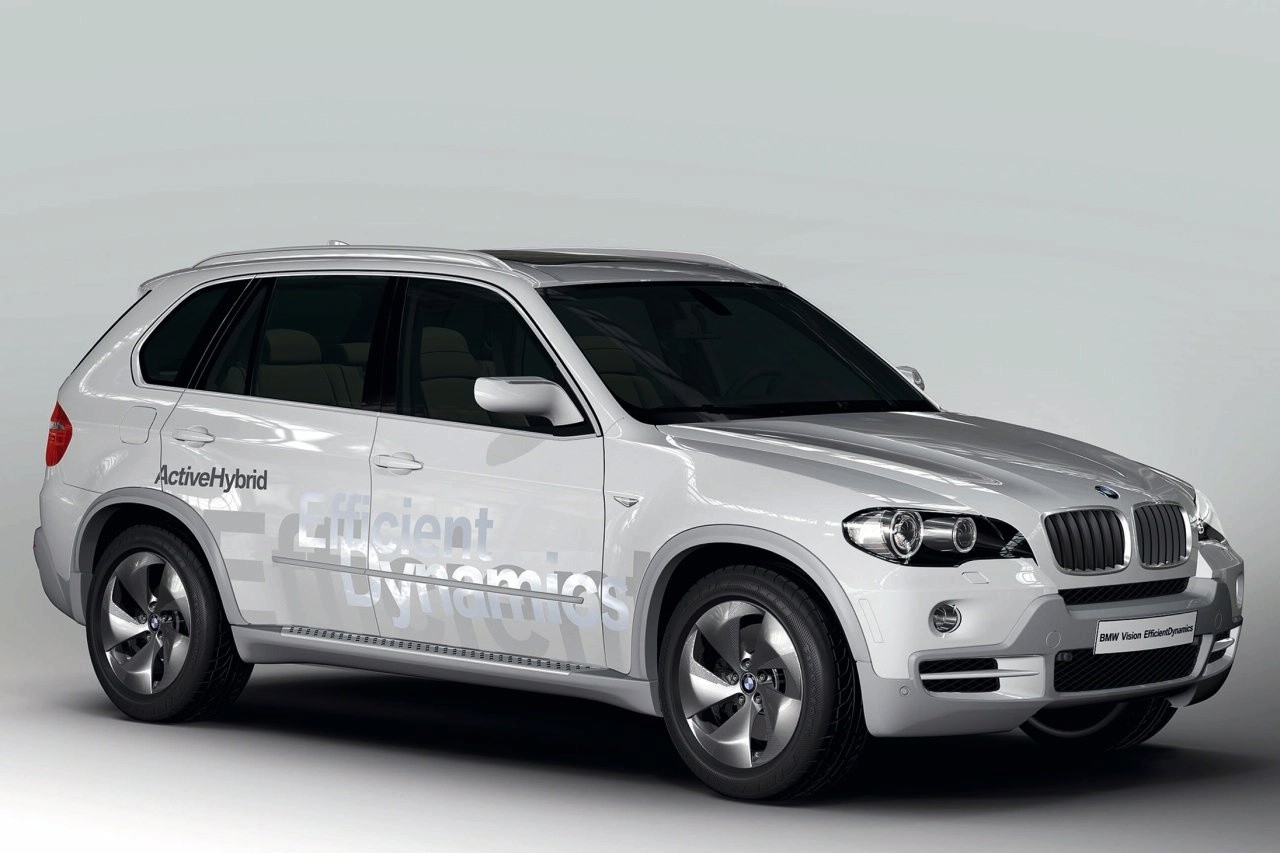 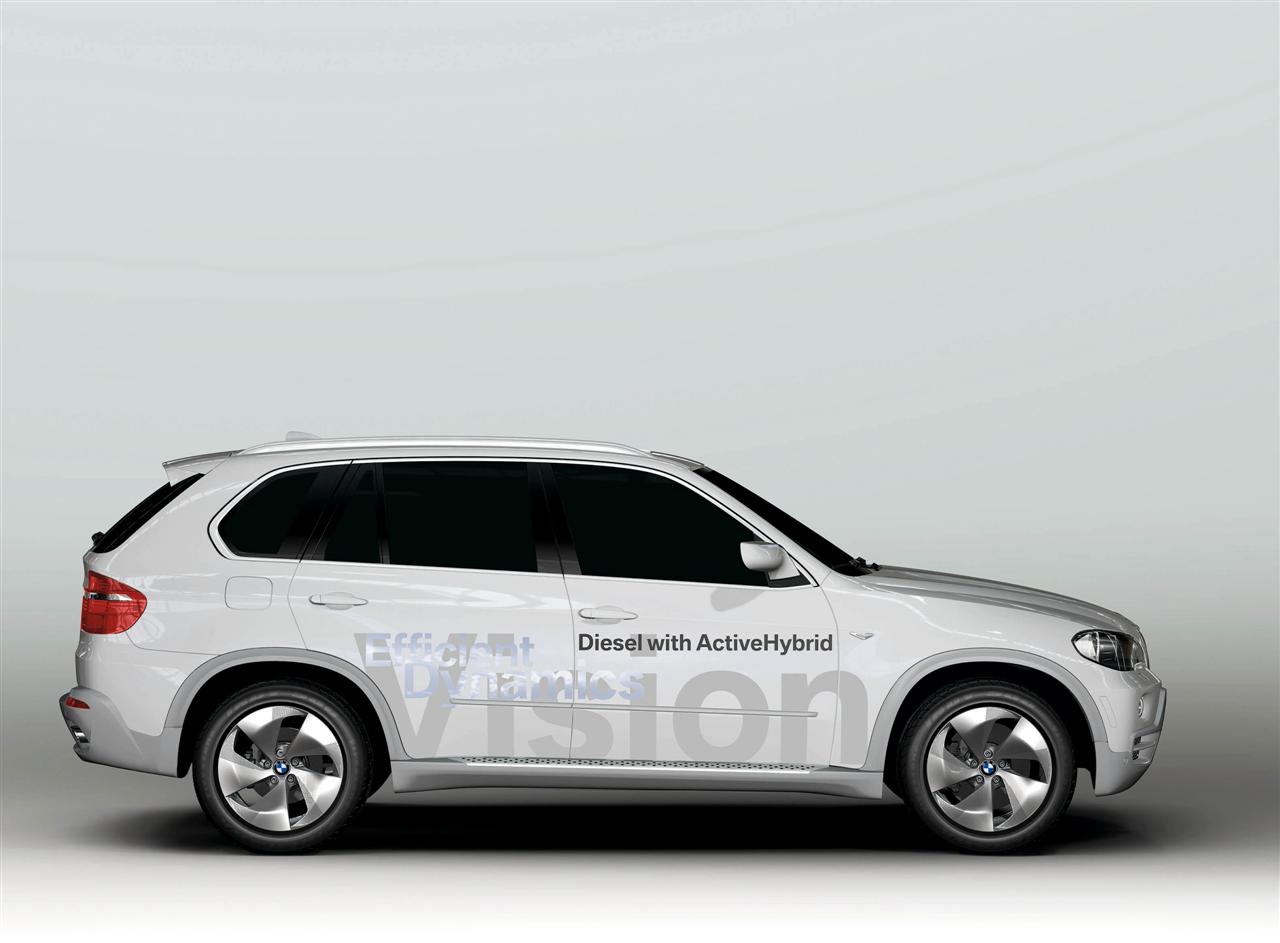 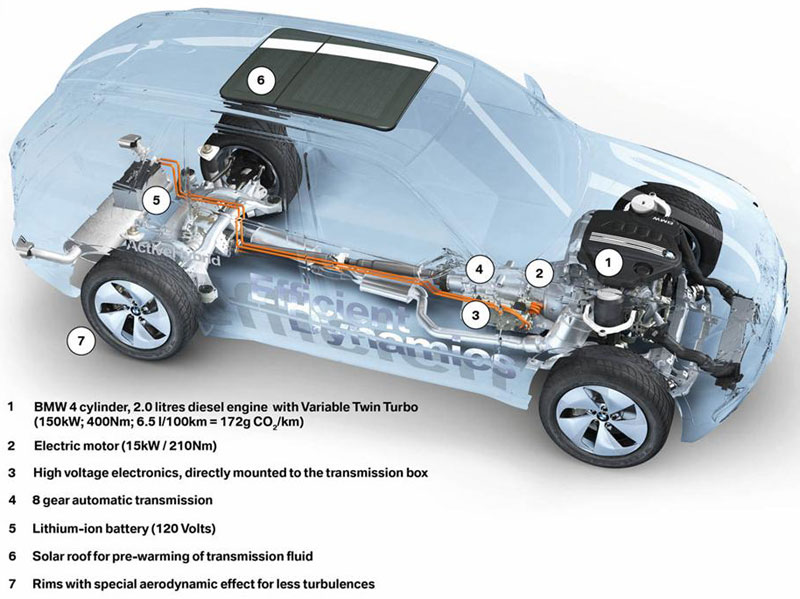 3 responses to “Rumor: Next generation X5 to feature a hybrid drivetrain with four-cylinder engine”