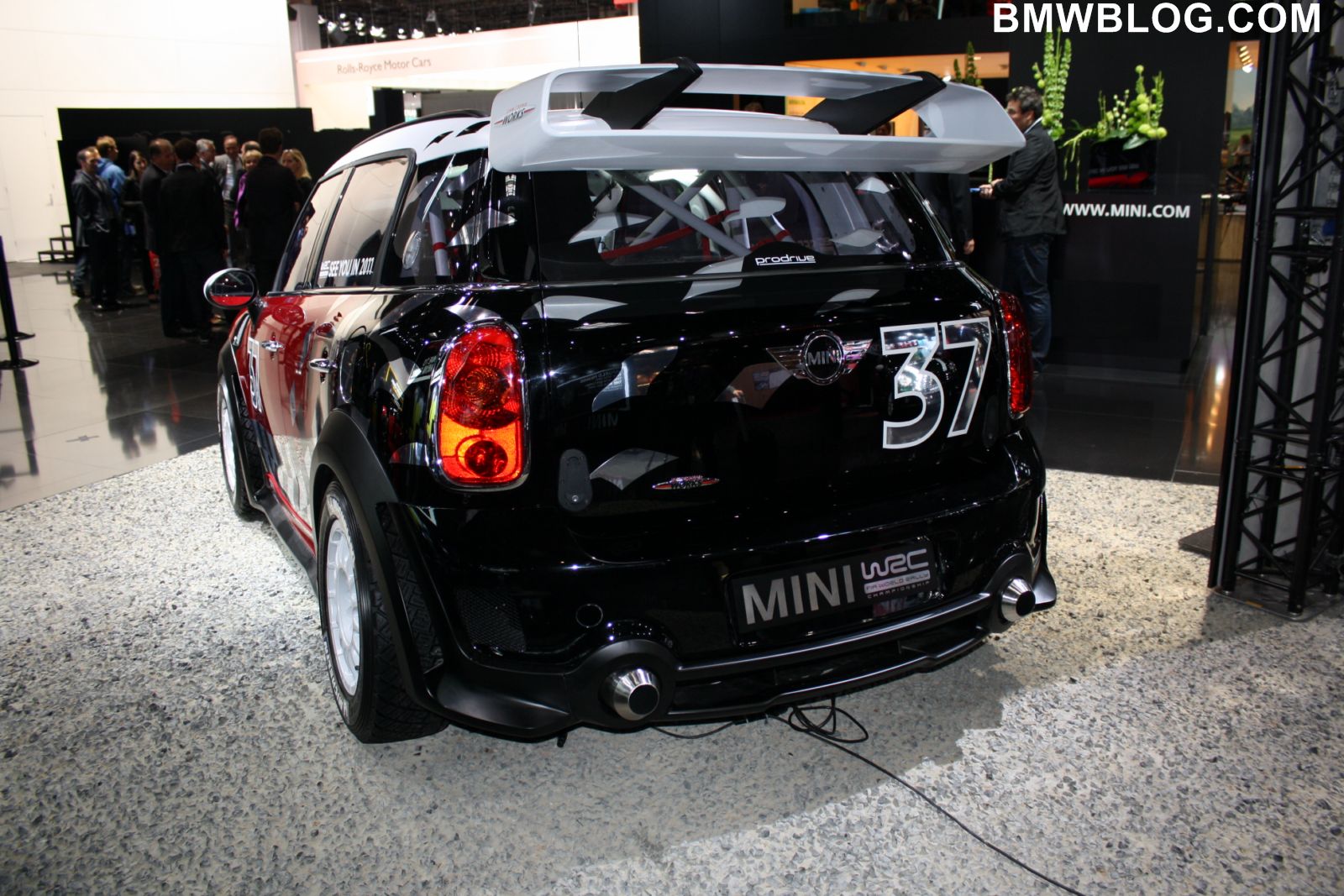 At the recent Paris motor show, MINI has unveiled their Countryman WRC which will run in the FIA World Rally Championship starting in 2011. MINI Countryman WRC is being developed in cooperation with Prodrive and it is based off the Countryman production model.

The powerful heart of the racing car is a 1.6-liter, four-cylinder Di turbo-charged engine from BMW Motorsport. The power transmission takes place via an Xtrac 6-speed, sequential gearbox.

The car complies with the new Super2000 regulations put in place by the International Automobile Federation (FIA).

To learn more about the MINI WRC and the future for MINI in the rally world, BMWBLOG sat down with Dr. Wolfgang Armbrecht, Senior Vice President Brand Management at MINI.

BMWBLOG: Let’s talk first about MINI’s comeback to WRC. How is MINI trying to bring the excitement and feeling of WRC and Rally to their prospects and customers?

Dr. Wolfgang Armbrecht: First of all, MINI has been for many, many years in the rally, maybe you know the history of MINI in the ‘60s, when we have won a couple of times the World Rally Championship – Monte Carlo 1000 Lakes Rally, etc. MINI has a very strong history as far as rally sport is concerned, and what we do here is simply that we start again. If we go a little bit back to our roots, in relation to our 50 years – last year we celebrated MINI 50, simply to make it clear that this is a brand with a long history, a long tradition, with very good basics to develop the next success.

BMWBLOG: What were the decision points behind using the 1.6-litre, four-cylinder turbo-charged engine from BMW for the Countryman WRC?

Dr. Wolfgang Armbrecht: There are a couple of reasons. First of all, according to us, the Countryman is a fantastic pre-requisite for rally: we have the 4×4, which is a very good pre-requisite, then the car has the right size according to our opinion and also the engine, due to the new regulation. So, this 1.6 liter engine was developed within our BMW Motorsports . We take this engine and we adapt it for the WRC. This means we’ve got the car, the 4×4, the right suspension and we’ve got an engine. A perfect fit. 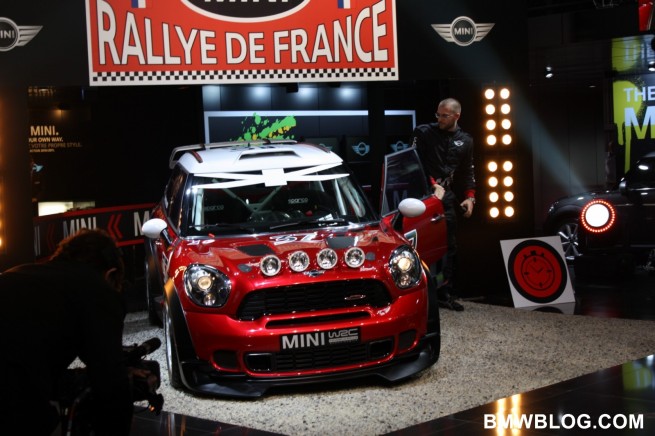 The engine went hand-in-hand with the new FIA regulations, and as we all know, it was an important influential factor because the new regulations made it a little bit more affordable for the competitors, for us, to step into this direction. Due to the new regulations, it is possible to save costs – which is an important issue also for many suppliers, for many companies, and also a influential factor for our decision to enter the championship.

We have a clear objective, to have a competitive engine at the end of the day.

BMWBLOG: Why has MINI teamed up with Prodrive?

Dr. Wolfgang Armbrecht: First of all, there was an intention from our end to go to WRC and look for a partner, and Prodrive has been in the field for many years, there were many links between BMW and Prodrive – over the last 10 to 15 years, and probably the most important thing, Prodrive had an excellent record as far as the rally business was concerned.

“Prodrive had an excellent record as far as the rally business was concerned.”

Therefore, we talked about it, we had a very positive talk and at the end of the day we made the final decision and said ‘okay, let’s seal up this partnership’. The partnership means that the business itself is done by Prodrive.

BMWBLOG: Is WRC a long commitment for MINI?

Dr. Wolfgang Armbrecht: We stated very clearly that our intention is that we want to win. And we are heading towards No.1. We are very ambitious, Prodrive is very ambitious, and we will try our best to win very soon. 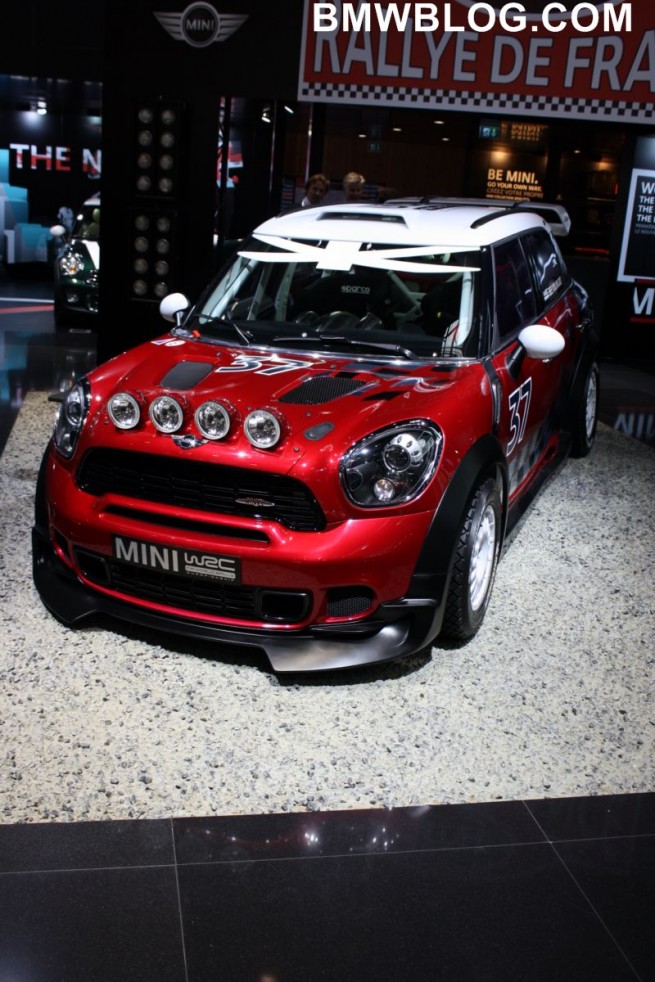 BMWBLOG: What are the differences between the all-wheel-drive for the production car and the MINI WRC version?

Dr. Wolfgang Armbrecht: You can see it’s a totally different car. The shape is the same, the drive is the same, but a couple of components are different. Take the cage for example. Or the engine.

BMWBLOG: Talking about design, was it influenced by designers or is it just aerodynamics?

Dr. Wolfgang Armbrecht: We have both influencing factors. But the most relevant is aerodynamics, because you have in mind to build a fast car. On the other hand, we have to acknowledge that inside the car we have to combine both factors, and therefore we should have aerodynamics and a good design.

The MINI designers were deeply involved in the process, it was a very good cooperation – this means “partnershaft” – every partner put on the table what it can do best – and the designers worked closely together with Prodrive. 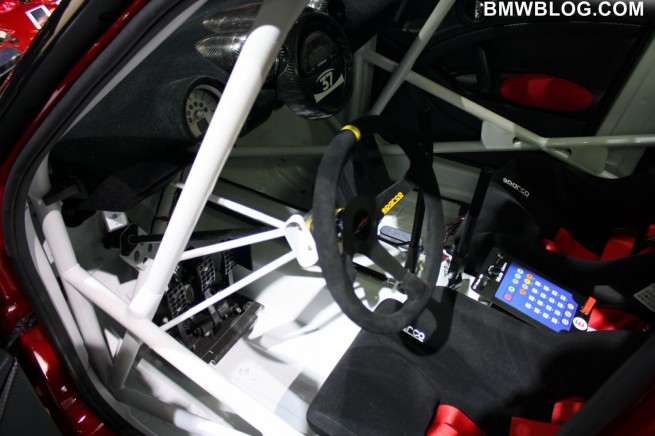 BMWBLOG: What are some of the design changes to the Countryman WRC compared to the standard model? When will we see a final design version?

Dr. Wolfgang Armbrecht: We don’t have the final technical details of the car. When we’ll have it, during the launch of the car that will be in March or April next year, we’ll make available all technical data of the car.

The car is totally different. Much lighter on the cage, the dashboard is different, the seating is different, and everything is different. What you see here today is the final design version. The design is decided already, the technical components will be there. This one [exhibited] is not a show car.

BMWBLOG: During testing sessions, is MINI experimenting with more variants of body kits and aero packages?

Dr. Wolfgang Armbrecht: For us this is a new test. And what do we know about the WRC? Nothing. We know there are competitors, and each competitor is really tough. And really good. And to compete with them, we need the best cars, the best drivers, the best team, etc. At the end of the day we have to try, this is a trial and error business. We have started testing in Portugal and we move forward through every testing to improve the next car. There are a couple of phases we need to move the car forward.

BMWBLOG: Who are the pilots testing the car?

Dr. Wolfgang Armbrecht: We are building the team. We have Kris Meeke, who was already appointed. We are working on the team – Prodrive is, in fact. We made a couple of decision – we have been in the decision making process during the last weeks: we’ve decided on the car, on the engine, on the contract , and now let’s approach the next thing, the team and the driver.

BMWBLOG: We know that in Motorsports technical failures can happen, so we assume there will be more than one car in the championship.

Dr. Wolfgang Armbrecht: Sure, sure. And at the end there won’t be only this racing car, but also customer related cars. These are on the table too because we want to share the excitement with as many customers as possible. That is why we will also have customer-related rally cars. 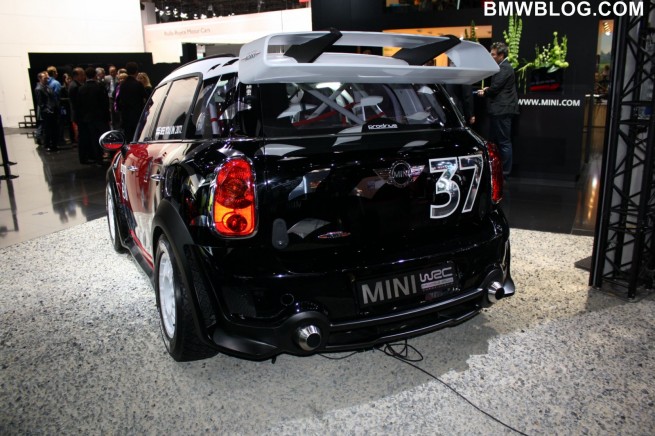 BMWBLOG: Will we also see a WRC street-legal model – a more sporty version?

Dr. Wolfgang Armbrecht: It’s too early for this. Maybe later. We will see.

BMWBLOG: What is the feedback received from the test pilots so far?

Dr. Wolfgang Armbrecht: They are really happy and we are very convinced about the first results, but we know there’s still a long way to go, many things, but all these things are possible. This is important – that is possible. It’s at our end – our team, our engineers, our designers, and our drivers, to move this car forward.

BMWBLOG: And what is the response received from customers related to the WRC comeback announcement?

BMWBLOG: Who is most likely to be the toughest competitor in this upcoming championship?

“…[Prodrive] has already many orders on the table for the customer-related cars.”

BMWBLOG: Do you think you will have an advantage because of the engine?

Dr. Wolfgang Armbrecht: We will see. We know and really respect their work, we know they are really good and we think this is an interesting challenge, we’ll take this challenge and we’ll find ways to come back.

BMWBLOG: How will marketing be used for the MINI WRC?

Dr. Wolfgang Armbrecht: Marketing is a fantastic possibility – advertising. But MINI is not so much into advertising, but on face-to-face communication. This means we work a lot on the internet, social media, Facebook., we’ll use our special MINI pages, and then we transfer them into events. And with rally, at every location we have the chance, together with our national subsidiary, to build up customer-related events. For us this is a fantastic because the difference for example to Formula 1, is that you’re much closer to the track, much closer to the driver, much closer to the car. And this means a lot as far as authenticity is concerned, from a marketing perspective, and therefore we are very happy.

BMWBLOG: Will there be any links to MINI Challenge?

And one more thing, MINI has grown to a family in the meantime. And wherever there is an opportunity, we show the whole family. MINI is not a single car – in the meantime there are four cars, and next year we get a fifth car, and then in the following year we get a sixth car. This means MINI is growing in many respects.

Dr. Armbrecht, thank you for your time!