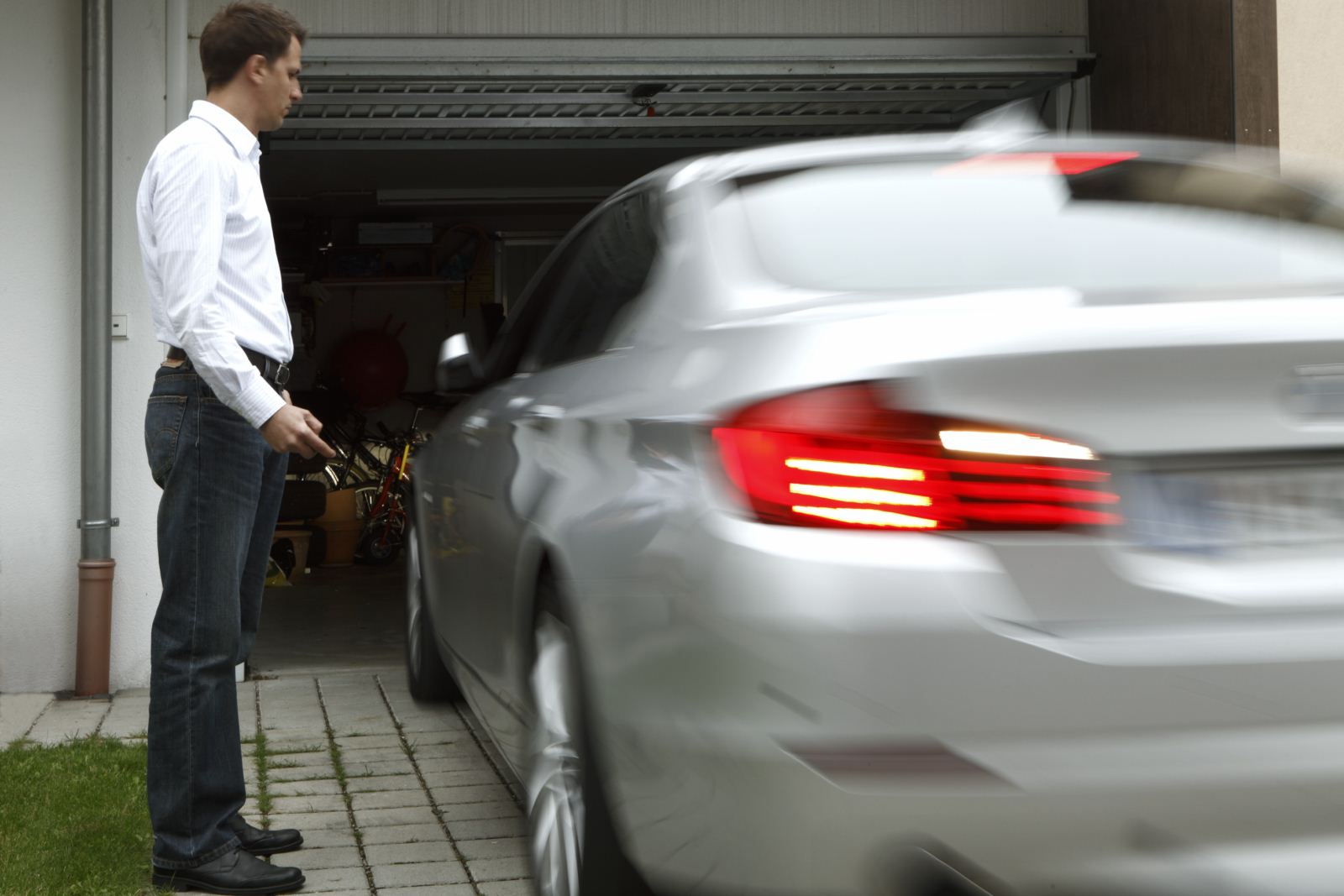 Buried in the long press release published last week by BMW around the 2010 Innovation Days, lays an important section on an interesting feature: Remote Controlled Parking.

Here is how BMW describes this innovative technology:

“While the Park Assist system in the new BMW 5 Series helps drivers during parallel parking, Remote Controlled Parking goes a step further, performing an entire parking manoeuvre – in this case forward perpendicular or garage parking – single-handedly. The driver does not even have to be sitting inside the vehicle. The Remote Controlled Parking function, also known as the “garage parker”, was first presented by the BMW Group in 2006, and the development engineers have been improving and refining it ever since. The new prototype of this system, which is capable of parking in any garage, even an unfamiliar one, without the aid of a reflector, demonstrates the progress made in developing near-production, automated driving functions. 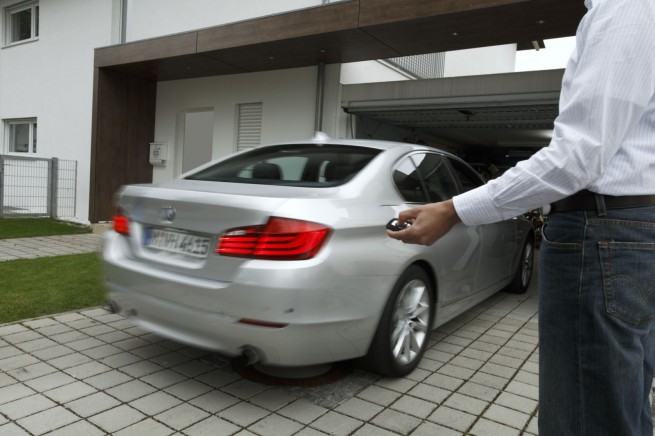 A driver planning to park in a narrow garage or other confined parking space using Remote Controlled Parking gets out of the vehicle and activates the automatic parking manoeuvre using the vehicle key. From this point on the garage parker takes control of the acceleration, braking and steering functions and manoeuvres the vehicle autonomously into the narrow garage – or out of it again. This spares the driver any awkward gymnastics or the risk of damage to the doors when getting into or out of the car in confined garages.

The parking manoeuvre is activated by pressing a specific sequence of buttons within a set time limit. The driver must remain in the immediate vicinity of the vehicle throughout. Activation of the system simultaneously locks the vehicle, switches on the parking aid and the dipped headlamps and folds in the exterior mirrors. The latter operation also serves as confirmation to the driver that the vehicle is ready to park. If the driver then presses and continues to hold the key button, this gives the signal:

Unlike the previous prototype, featuring a camera and reflector, the current prototype uses the vehicle‟s existing sensor systems. Guided by the six ultrasound sensors of the Park Distance Control and Park Assist systems, the vehicle slowly moves forward into the garage at a speed of approximately 2 km/h, aligning itself centrally between and parallel to the walls on either side. Any necessary steering corrections to achieve this positioning are performed by the power steering system motor. The garage parker‟s control unit also controls the engine Auto Start-Stop function, the automatic transmission‟s gear selector, and the brake system. 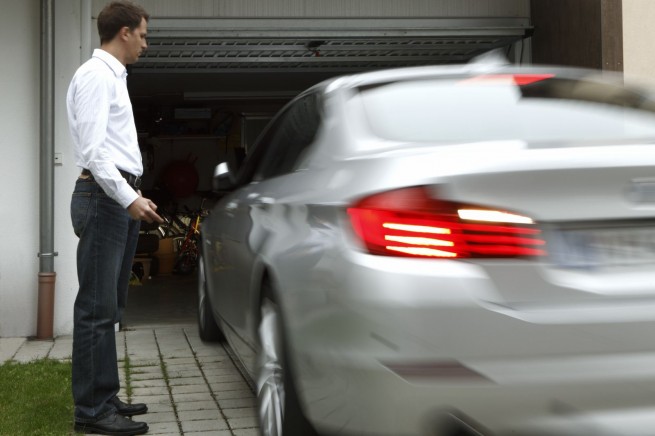 If an obstruction is identified, the sensors order an automatic stop and the hazard warning lights come on to show the driver that the operation has had to be aborted. If, on the other hand, there is nothing in the vehicle‟s way, the system completes the parking manoeuvre, braking to a standstill and changing to selector position “P”, so that the vehicle is left properly secured. To activate the exit manoeuvre, the driver presses the same sequence of buttons used when parking. The vehicle will then autonomously back out of the garage or parking space. Again, the sensors monitor the area around the vehicle for any obstacles and again the driver must be standing close enough to the garage to be able to follow the entire operation.

Safety considerations are paramount with this prototype. Throughout the parking manoeuvre, whether entering or leaving the garage, the last button in the sequence must remain held. If the button is released, the car stops immediately. If, after leaving the garage, the driver‟s door is not opened within a given time limit, the system automatically shuts off the engine and locks the vehicle again. There is also a restriction on the distance which the vehicle is “permitted” to travel autonomously: this is limited to a few metres, depending on the length of the vehicle (seven metres maximum in the case of the BMW 5 Series prototype). Before the garage parker can go into production, however, it will first be necessary to clarify the legal situation regarding autonomous vehicle operation. In many countries it is illegal to start the
engine from outside the vehicle or to move the vehicle if the driver is not sitting at the wheel.” 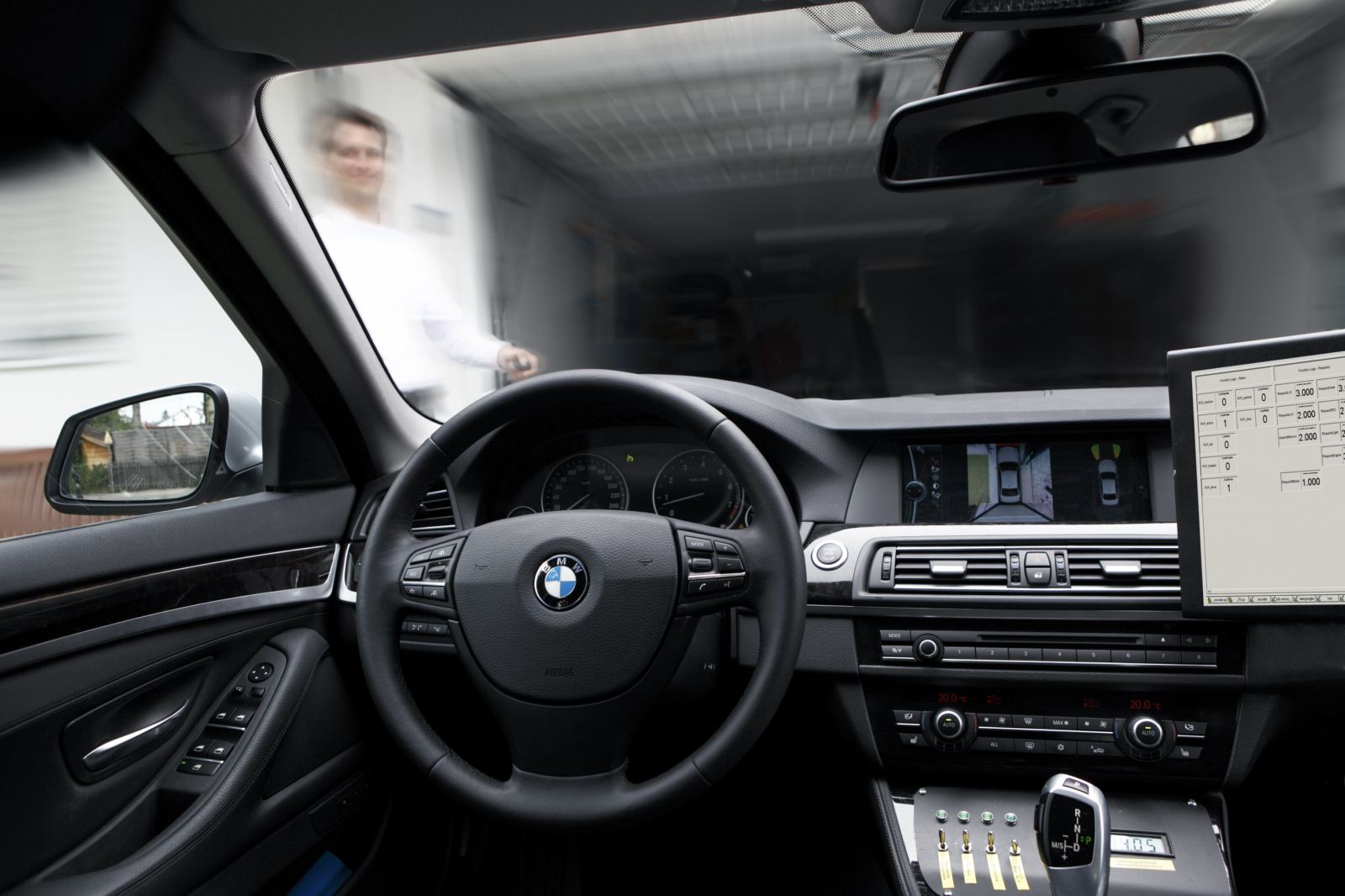 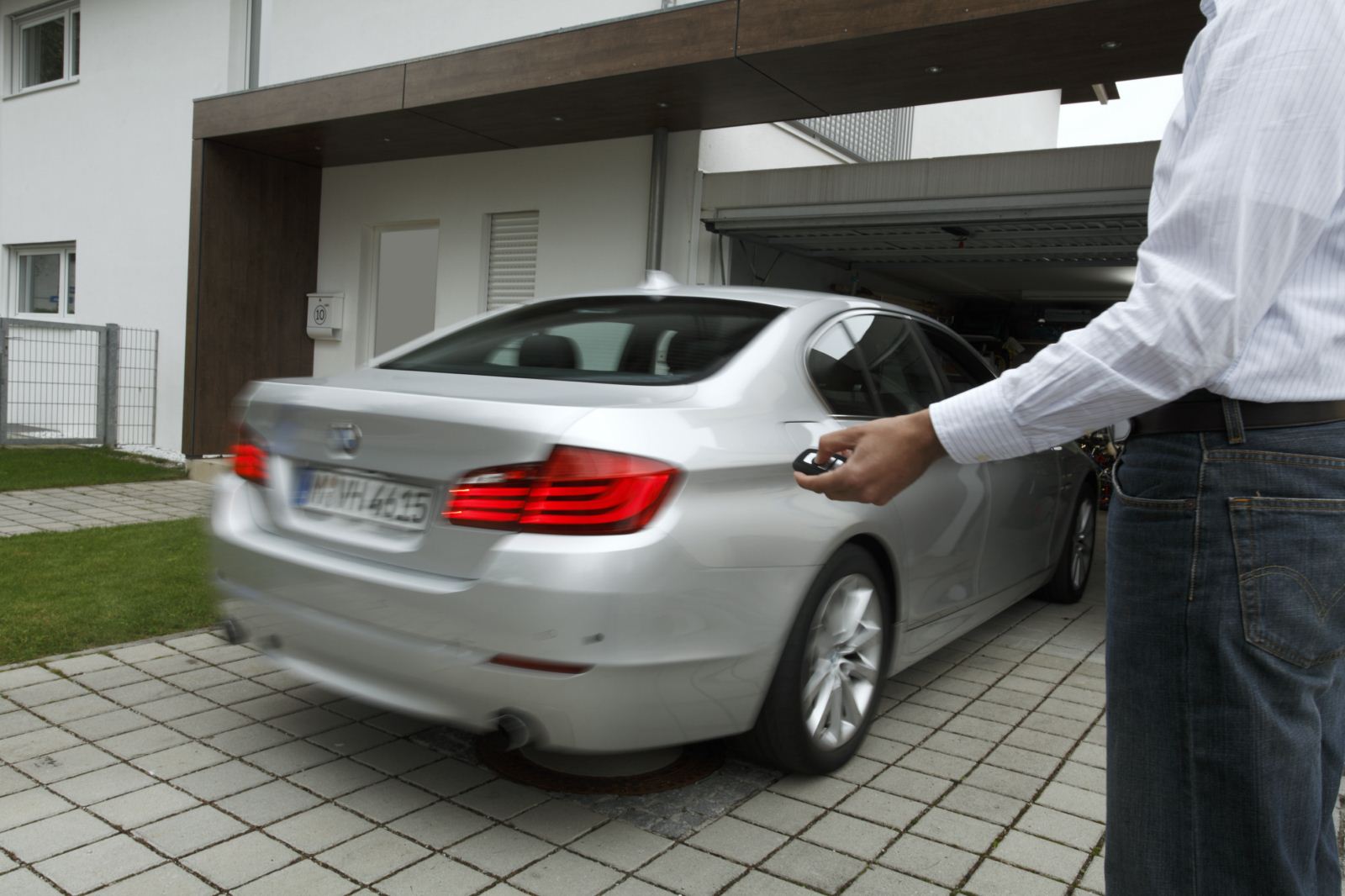 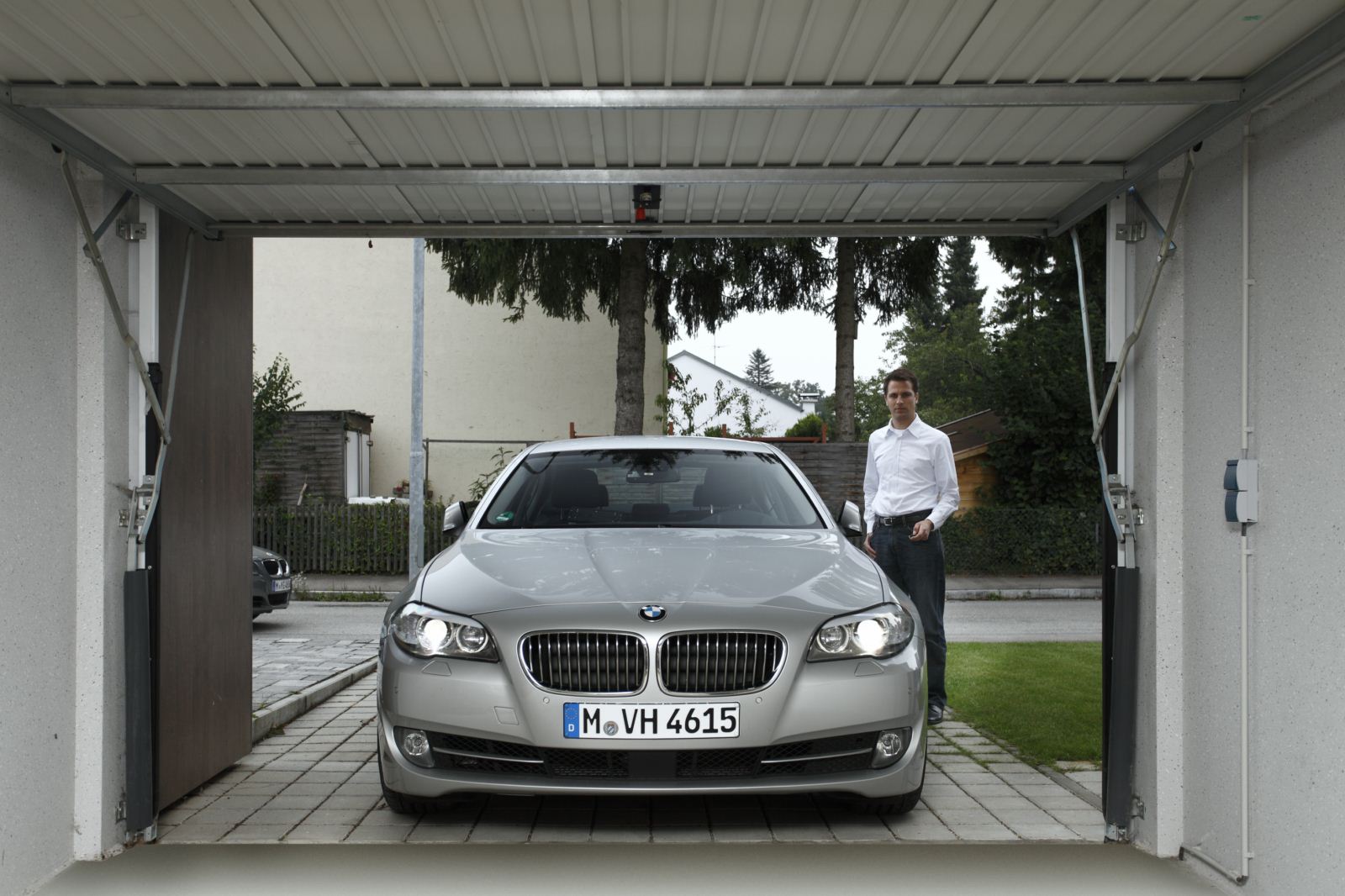