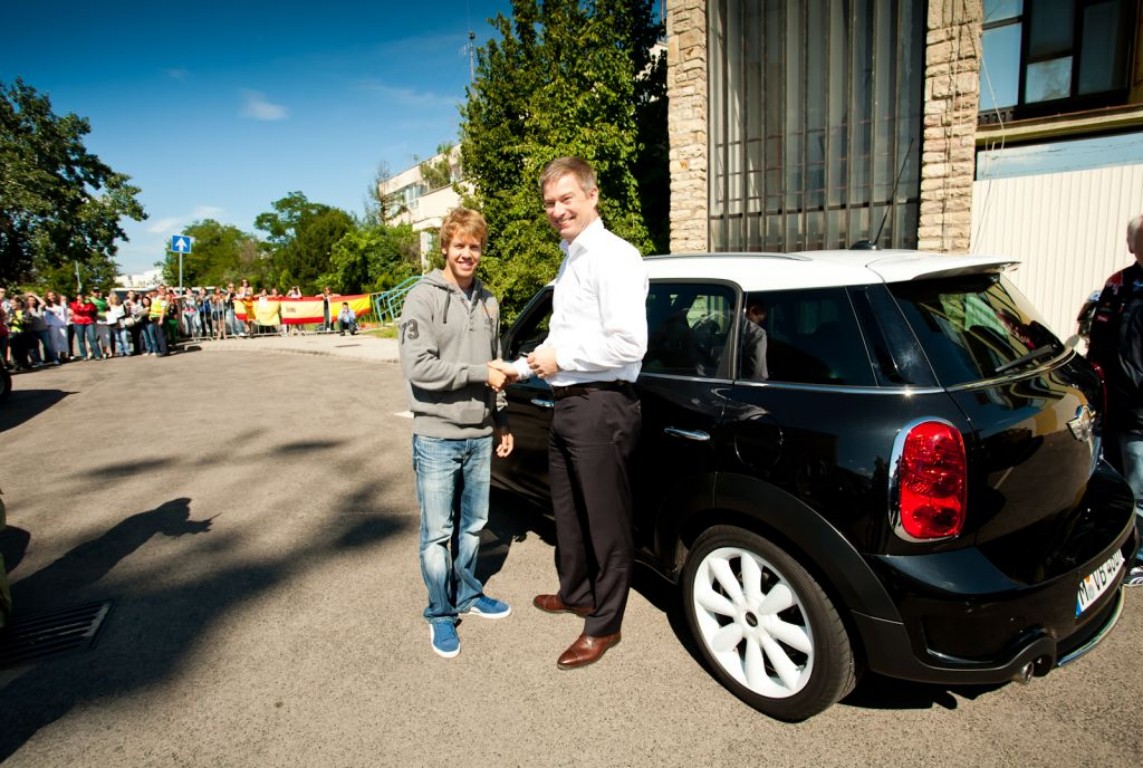 Red Bull Racing driver and Formula 1 youngest star Sebastian Vettel had a chance to spend some time with the new MINI Countryman. Vettel, a Formula BMW graduate, won the Formula BMW ADAC Championship title in 2004 with a record 18 wins from 20 starts. Since then he has gone from strength to strength and last year was the runner-up in the Formula One Drivers’ World Championship.

Prior to that in 2007 he became the youngest driver to score a world championship point when he stood in for Robert Kubica in the BMW Sauber F1 Team in Indianapolis.

He became a fulltime Grand Prix driver in Hungary the same year when he moved to Toro Rosso. Just over a year later, in Monza, the young German not only secured his first Formula One pole, but also went on to claim his first win.

Red Bull Racing driver Sebastian Vettel drives a MINI Countryman during his stay in Budapest at the F1 Grand Prix. The car having its market launch only in September was offered to Sebastian by BMW Group Hungary. The driver currently 4th in the World Championship was happy to have the car at his disposal – he sat excitedly into the new MINI model and drove straight to the Hungaroring from the airport. The black MINI Cooper S Countryman was delivered from the new model’s international media launch to Budapest to be Sebatian’s companion on the Hungarian roads and was handed over by Henning Putzke, Managing Director of BMW Group Hungary.

It may not appear on Formula 1, but we will have the chance to see the new MINI Countryman WRC model in the World Rally Championship as a car with a rich and successful heritage as Monte Carlo rallye winner returns to the international rally sport starting from next season. The car is developed by Prodrive, in close cooperation with MINI, and is based on the production model. The powerful heart of the racing car is a 1.6-litre, four-cylinder turbo-charged engine from BMW Motorsport. 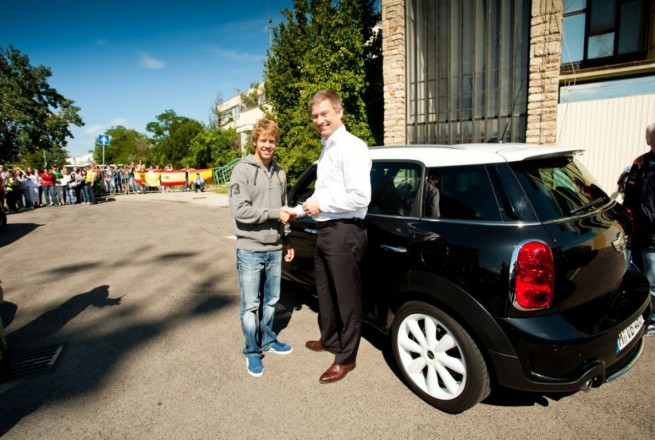 The MINI Countryman is the first member of the MINI family with a body measuring more than four meters in length and optional all-wheel drive. With these features, in addition to the Countryman’s raised seating position and optimized riding comfort, the world’s only premium vehicle of its kind crosses the boundaries of urban mobility to take the trademark MINI feeling into new dimensions and win over additional target groups.

The latest generation of petrol and diesel engines has been recruited to power the MINI Countryman. Their brisk power development and optimized smoothness contribute to the Countryman’s agility and excellent long-distance comfort – both MINI trademark traits. Plus, the remarkable ability of all the units to extract maximum benefit from the energy they consume enables the brand’s fourth model to boast a stand-out level of efficiency over its direct competitors. Extensive MINIMALISM measures play a key role in further reducing fuel consumption and emissions.

Optional MINI ALL4 all-wheel drive allows the driving fun you expect from the brand to be experienced off the beaten track as well. The permanent all-wheel-drive system’s quick and precise responses to changing conditions provide a new, traction-led expression of the handling talents for which MINI is famed. An electromagnetic centre differential positioned directly on the final drive varies the distribution of power seamlessly between the front and rear axles. The ALL4 system is available for the MINI Cooper S Countryman and MINI Cooper D Countryman.

The market launch of the new MINI Countryman will be 18 September 2010.