Rolls-Royce stands for luxury, the brand name has and always will be associated with the ultimate luxury automobile, but this has not stopped the Goodwood-based company from adventuring into a new field: picnic sets. Not just any picnic set, but one designed in-house by Bespoke team which is part of around one hundred individualization features now available to Rolls-Royce customers.

The “ultra-luxurious” Bespoke picnic set was designed for four people and includes dinnerware encased in a polished aluminum and leather container.

To tell us more about the Bespoke project, Rolls Royce releases an interview with some of the designers involved in this unique project.

“The most exciting thing for me is that an automotive company has embraced a project like this. It’s very non-automotive for car designers to be given the opportunity to sit down and focus on something like a bespoke picnic set. It shows a vibrancy in the brand and make us unique.”

“The creation of a bespoke picnic set was always a question of entertainment, not just functionality. You choose to eat outdoors and you want to do it in an entertaining and elegant way, to make an occasion of the experience. Our design encapsulates that approach.”

The 1920s. A golden age for picnicking. An era in which dining al fresco was an event to be savoured, not just a convenience on a long journey.

For Rolls-Royce owner’s opulence was the order of the day. As well as Rolls-Royce designed hampers, names like Asprey, Coracle, Vickery and Drew & Sons could be found straddling the running boards of cars, as drivers and passengers prepared to dine out in style. Frequently the centre-piece of a day, the picnic was an event in itself, to be enjoyed in the presence of an automotive work of art to complement the most delightful English view or the highest society event.

Today the golden age of picnicking promises an exclusive return thanks to the skill of designers and craftspeople at Goodwood, England. The Rolls-Royce Motor Cars bespoke programme has delivered an exclusive four person picnic set, taking cues from the past and translating them into a modern and exclusive interpretation for 21st century.

A picnic set developed for the Phantom Drophead Coupé

The idea had been considered during the development of the Drophead Coupé. However, the launch of this hands-on variant of the Rolls-Royce Phantom in 2006 presented the perfect canvas for work to begin. Here was a car that drivers and their guests would truly embrace – with a trunk operation that replicated the opening of a picnic cabinet. It echoed some early coach-built models, where the cars themselves were an integral part of the dining experience.

What was the starting point for the design?

Extensive research was key. The aim was to understand the past and encapsulate the essence of early 20th century designs. Back in the day, diners could choose from an array of products from suitcase, wicker or front-folded trunks. Then there were the features included to accommodate the type of picnic experience – hot or cold for example – as well as the number of guests to be considered.

But a 21st century Rolls-Royce picnic set was not a question of mimicking past design, Far from it. Nor was it a case of benchmarking against picnic set designs today – however exclusive. For the design team at Goodwood the brief was clear; create the Rolls-Royce of picnic sets, with a design benchmarked against the stunning cars themselves – starting with the Phantom Drophead Coupé.

How long did the process take?

Research began early in 2009. Then in the autumn, the design started to take shape. From the first pencil sketches, a further three months were taken to develop a computer aided design scheme, then three more to make a working prototype. In total, around six months and 1,500 hours went into the design and creation of the four person picnic set, before its first appearance at Villa D’Este, Italy in April 2010.

What were the design challenges?

There were practical challenges of course, such as considering how a modern picnic set might be used by its owner. Then there was question of identifying suppliers for the contents. But, fundamentally, there was a deeper issue: the Rolls-Royce of picnic sets had to possess the wow factor.

Alex Innes explained, “We wanted to make sure this wasn’t just going to be another box filled with other people’s products; it had to be designed from the ground up. And we wanted to come up with engineered solutions, demonstrating our innovation.”

“A degree of theatre was particularly important too,” added Gavin Hartley. “We wanted to explore the way the trunk opens in the Drophead Coupé. The way things open out, you appreciate a sense of unpacking. It’s exciting and surprising and exceeds expectations. You might think it’s a box, but when you open it out, it presents owners with useful surfaces like drop-down tables.”

What is it made of?

The set blends attributes of traditional wicker hampers, but in a leather front-folded unit that facilitates air flow while offering the solidity of a trunk.

The team started with oiled teak, a material that complements decking commonly selected as an option by Drophead Coupé owners. Saddle tan leather originates from a small tannery in Germany while polished aluminium and stainless steel complete the unit to be presented at Salon Privé this week.

After opening the set and folding out Indian rosewood tables, owners are presented with Goodwood designed hand-blown and cut stemware, cutlery made by David Mellor CBE

and clever design touches like magnets inside chopping boards to hold knives in place.

But while designed to a recommended layout and configuration, the set can be personalised through veneer, leather and individual requirements; this is a bespoke picnic set after all.

Oak might be chosen as an option by the owner of a Phantom saloon to match a vehicle interior. And leather can be dyed to match the colour of an owner’s Rolls-Royce luggage set – another exclusive design developed in the Goodwood studio.

How much of the picnic set will be made at Goodwood?

Like all Rolls-Royce bespoke designs, the picnic set has been brought to life by skilled craftspeople working in bespoke wood and leather shops at the Rolls-Royce plant in Goodwood. Only metal work and contents of the set are sourced from carefully selected partners to exacting Rolls-Royce standards.

Are there any customer orders?

The four person picnic set is a commissionable item, made to order. And while the team’s focus was for Drophead Coupé, the first firm customer order came from a Phantom saloon customer in the UK. Further orders are expected, following a number of serious enquiries worldwide and its UK debut at London’s exclusive Hurlingham Club.” 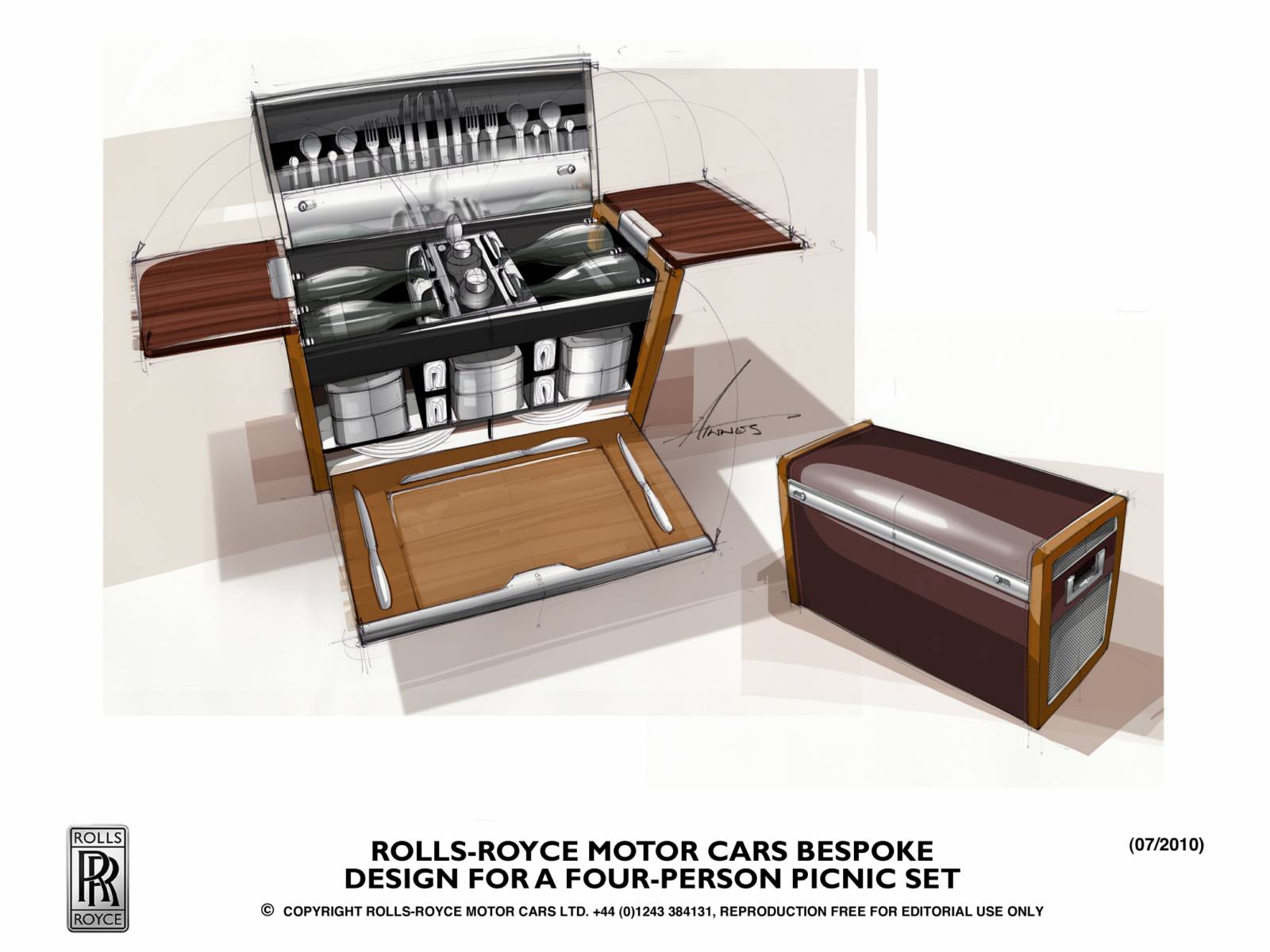 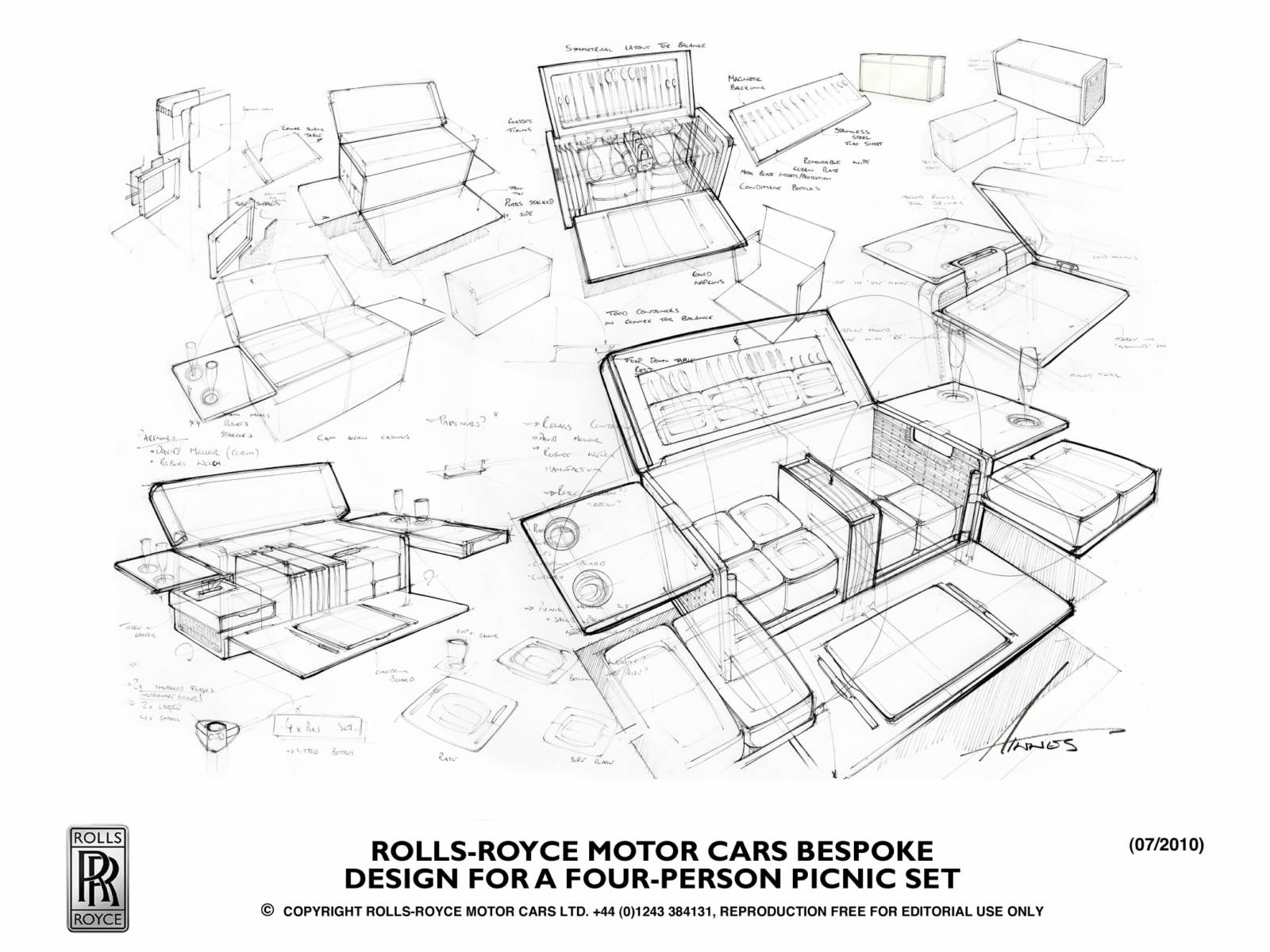 [Photos by Worldcarfans and Rolls Royce ]