NY Auto Show 2010: A Walk Around with Martin Birkmann and Jack Pitney

Home » NY Auto Show 2010: A Walk Around with Martin Birkmann and Jack Pitney 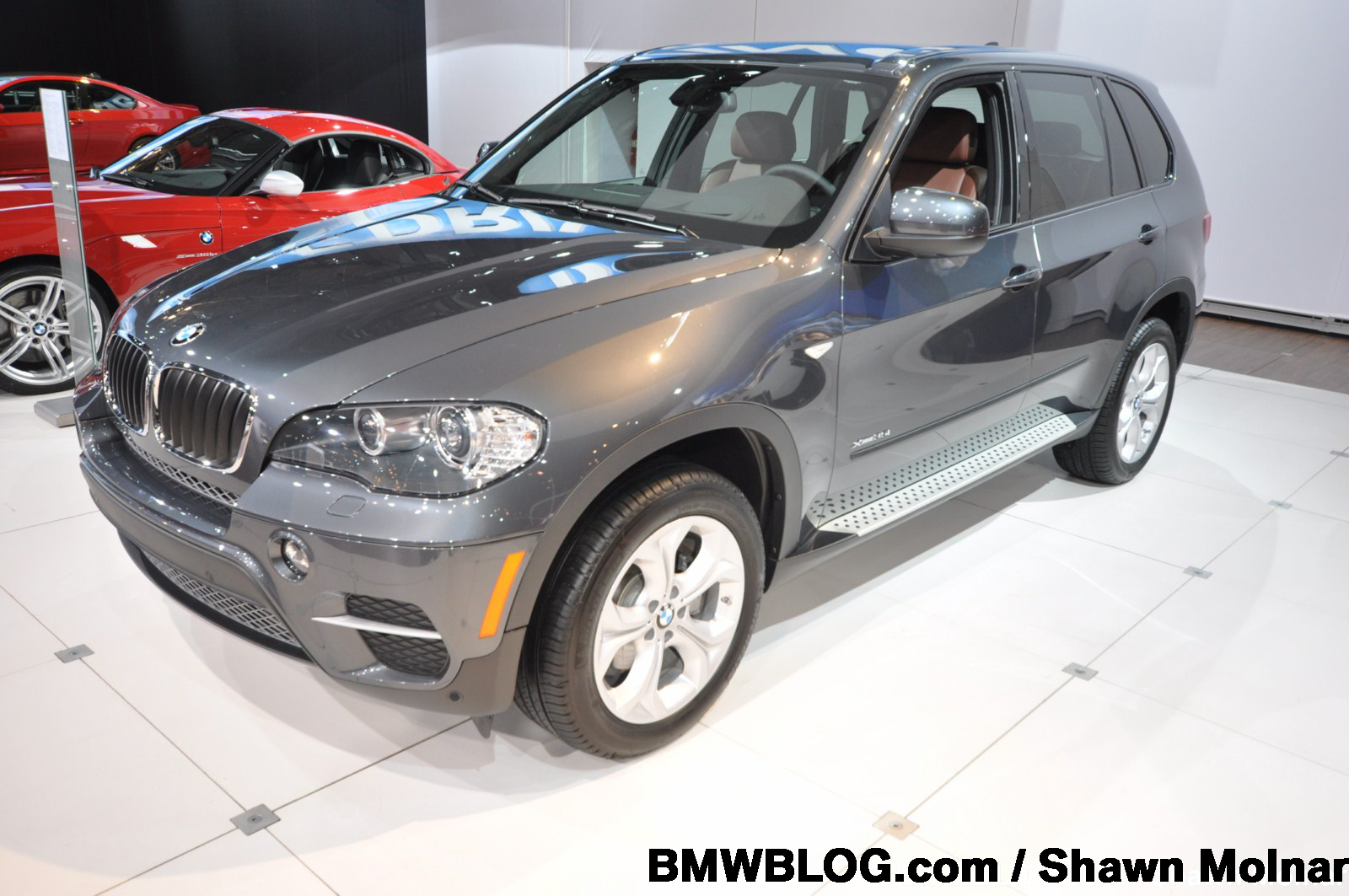 One of our favorite parts of the auto show is the “walk around” given to a select group of journalists. Here we enjoy insights into several new cars and technologies as we walk around the display floor. In NY we were delighted to follow Martin Birkmann and Jack Pitney around as they talked to us about a few highlights of BMW’s new cars.

Here are a few of our notes:

“These are the best cars in the world!” exclaimed Jack Pitney with his enthusiasm boiling over. He went on to explain his comment, “BMW takes risks.” Yes, this can be seen in Project “i” – BMW’s new alternative-drive small car development for extra urban environments. Project i leaders hand selected the finest among BMWs work force – designers, engineers, market researchers etc. A think tank was instituted and these brilliant men and women were even removed from their typical work environment to free their minds and blossom with ideas. These efforts are turning results and according to Jack there are some brilliant new concepts and ideas coming to fruition. Of course, he couldn’t tell us any details, but the twinkle in his eyes and wide smile on his face tells us that he is not bluffing; BMW has taken a “risk” in pushing ahead with project “i” and they are reaping results. We can’t wait to see the final product and take it for a spin. 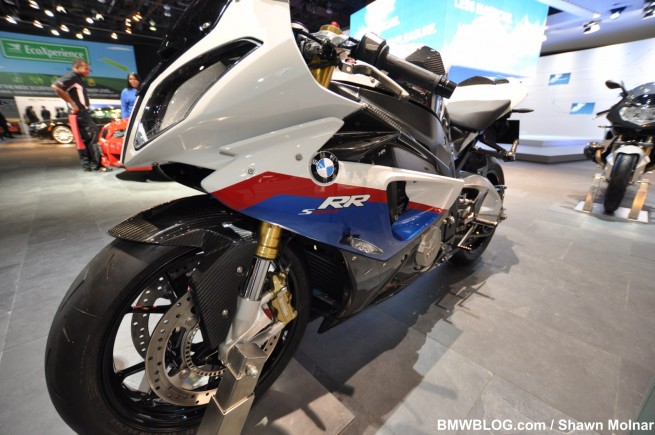 BMW’s new S1000RR is their first bona fide super bike built to compete directly with the competition in the segment. Jack spoke about “pounding a stake in the ground” with this bike, and we suspect there is a victory flag flying on top of it. How passionate is Jack about this new bike? Well, for starters, he rode it into the press conference (on polished floors with green tires we might add) and had much to say of its speed and usability.

He told us he was recently knee dragging around a race circuit on it and he is a firm believer that this bike is now on top of its competition. Every major motorcycle journal we’ve read seem to agree with Jack – Bike magazine of the UK recently had the S1RR on their dyno where it produced more horsepower at the rear wheel than any other production bike they’ve ever tested. Ever. That’s including Kawasaki’s ZX14 and Suzuki’s Hayabusa – both bikes that have significant displacement advantages of 400cc’s. The S1RR is a bold statement by BMW, a testimony to their engineering prowess and design competence. “Big risks offer big returns” – BMW’s risk building this bike has paid off handsomely. Again we see Jack’s point from the top of the preceding paragraph. 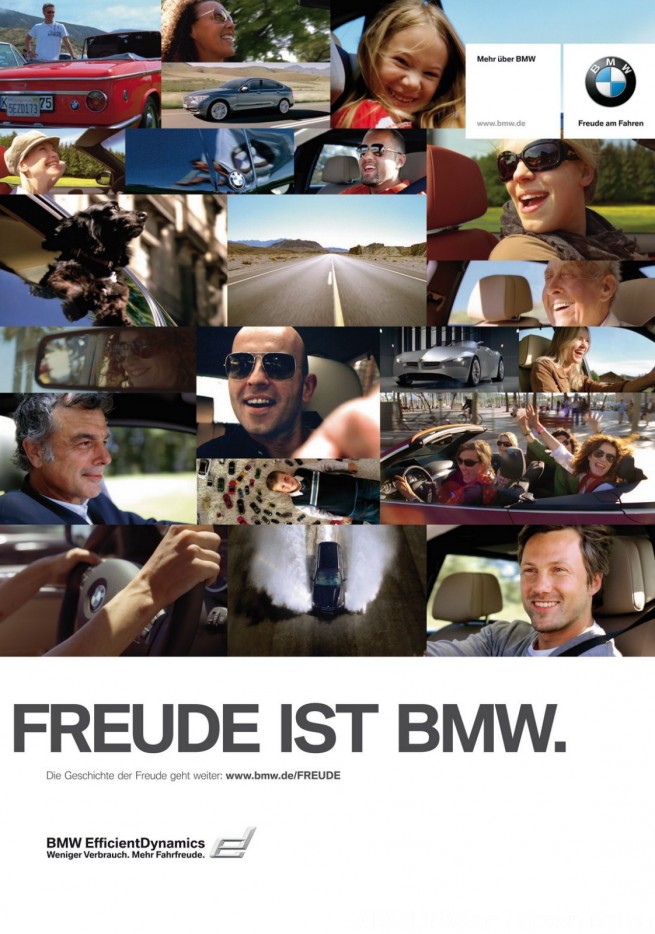 Next we talked about controversy over marketing the joy campaign. We’ve heard a lot of feedback from our readers regarding BMW’s new Joy campaign. Jack explained that a major US news journal had incorrectly claimed that BMW was replacing their slogan “The Ultimate Driving Machine” with the “Joy” campaign. This is categorically untrue and Jack emphasized that “BMW always has been and always will be the Ultimate Driving Machine.” The truth is, Trivial Pursuit would have the biggest gripe with BMW if they dropped their iconic phrase because as it turns out, “The Ultimate Driving Machine” is the only automotive tag line to be found in their board game. “Freude am Fahren” has been a German marketing line for decades and it directly translates, “The Joy of Driving.” Take your seats folks and lose the pitchforks – the joy campaign is nothing new and North America is only now getting a taste of BMW’s “joy” in marketing.

On to electric and other alternative drive vehicles, Jack could put our minds at ease. “0 emissions driving can be a lot of fun,” he went on to explain that electric cars are intrinsically fun to drive thanks to the immediacy of their torque output, available from “0” rpm. He concluded, “we’re going to be the ones who bring fun to electric driving.” 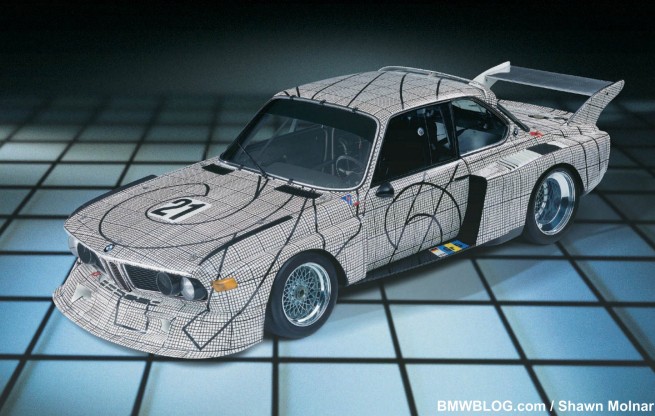 Before handing off the mike to his associate Martin Birkmann, Jack left us with one last thought. This year marks the 35th anniversary of the “Art Car” BMW’s artistic tribute to various international artists. BMW is a company that embraces creativity, art and passion – the art car is an original contribution to the world of art and its artists. 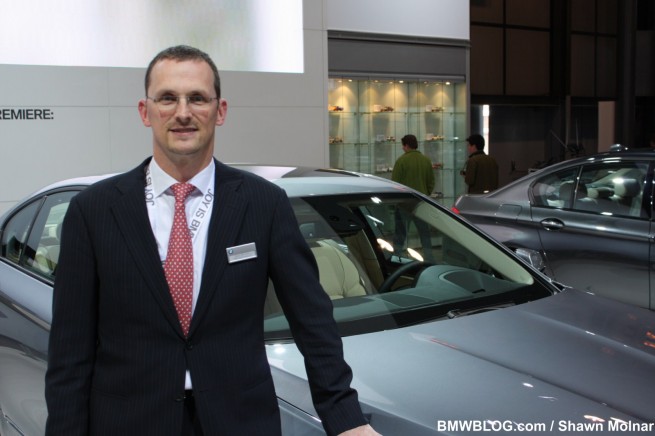 Martin Birkmann started off having us gather around the ActiveHybrid 7 series. Looking in the trunk he highlighted that BMW engineers have adopted more advanced battery technology than was available in the ActiveHybrid X6. Lithium Ion batteries power the 7 series and as a result space efficiency is increased. The ActiveHybrid 7 sacrifices a small amount of space in the trunk to accommodate the battery pack – about the space of two conventional car batteries is lost. 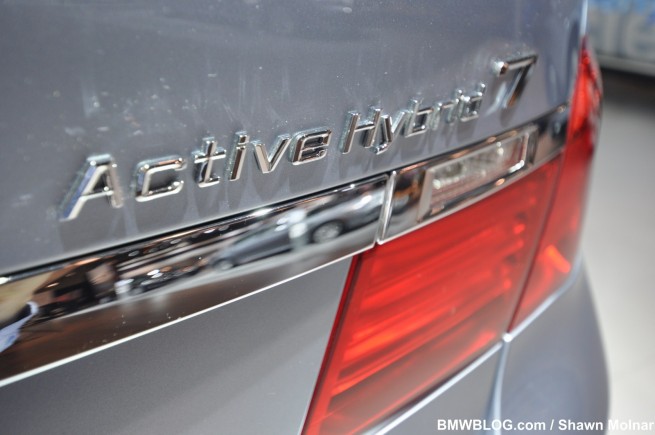 The benefits are many and significant however, as the ActiveHybrid 7 achieves the V12 performance of its 760Li sibling while maintaining I6 levels of fuel economy. 0-60 arrives in 4.7 seconds while achieving EPA ratings of 17 city, 25 highway mpg – a 15% improvement in fuel economy over the non hybrid 750i (featuring the same N63 twin turbo V8 engine). 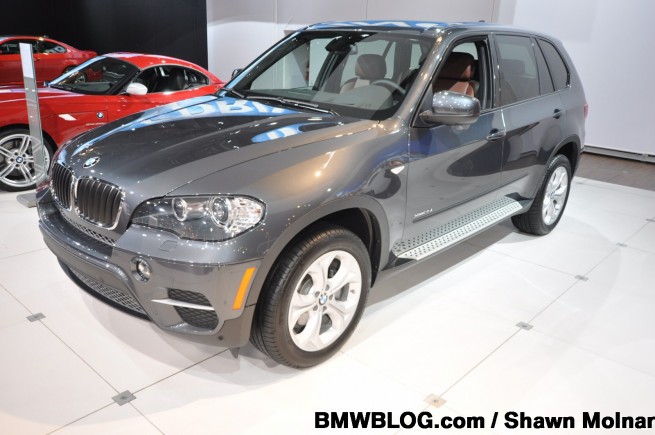 The X5 LCI (Life Cycle Impulse or “refresh”) has marked styling changes around the vehicle. The fog lights have been moved higher to the belt line of the vehicle and horizontal winglets are now found in the lower air intakes. All X5s sold in the US will now be turbo charged and directly injected. The current base model X5 will now be as fast as the previous X5 4.6iS while consuming less fuel. 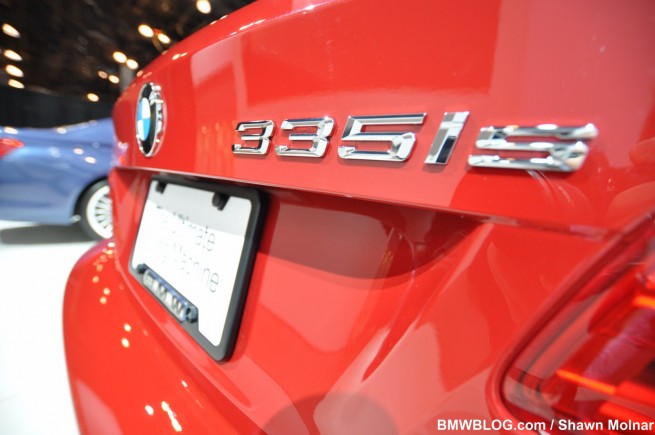 BMW’s new 335iS brings affordable performance and fun to the US market. New features on the 335iS include sport wheels, gloss black mirrors, an M aero body work package including a functional (and beautiful) rear diffuser, a 6 speed manual or 7 speed DTC transmission, additional engine cooling and a power boost of 20 hp. A boost button offers an additional 38 lb-ft of torque for up to 7 seconds. The 335is will only be sold in the US market. Martin explains that this car fits well within the range, offering 80% of the M3’s performance for 50% of the price premium. In USD the 335i sells for $41,000, the 335is for $50,000 and the M3 for $57,000, so the “is” really does sit squarely between in price point. The 335is will be offered as a convertible in the future. 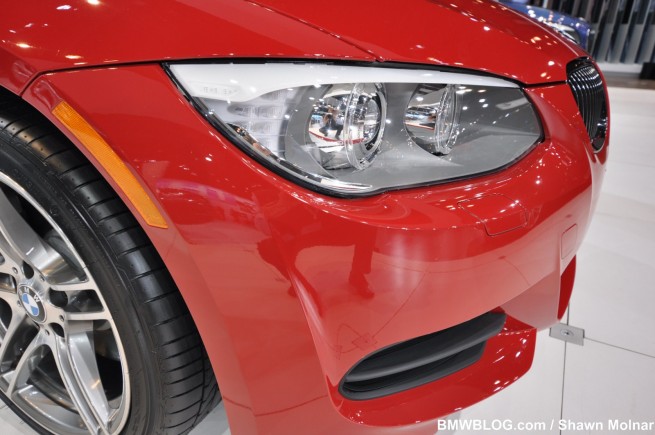 Shared with all 3 series LCI cars are new LED corona rings and illuminated eyebrows, adding a very focused look to the performance coupe or sedan. 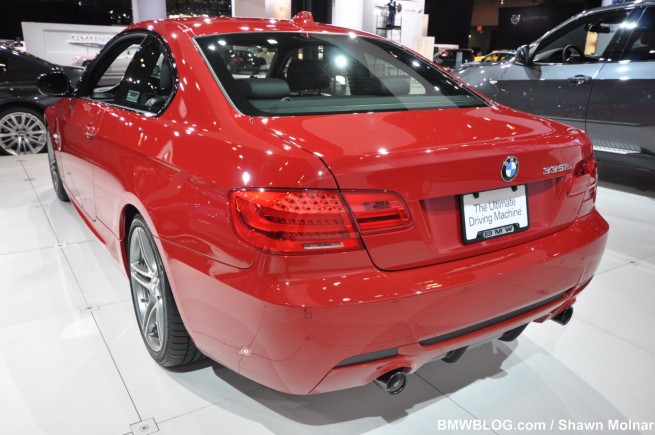 And now to the F10 5 series. Martin had much to say, and we were all ears; we stood close to the car taking notes as Martin demonstrated different features. “The proportions are the same through all generations of the 5 series” looking at the exterior dimensions of all 5 series cars. The new 5 is a beautiful today as the original 5 series was in 1972. European crash standards have forced designers to work around new parameters, but the end result is still handsome. Pedestrians will be protected by a new “soft bumper” that can readily absorb an impact instead of inflicting major injury upon a pedestrian in the event of a collision. The hood line is moved back and completely separates the hood from the front bumper in moderate collisions, thereby facilitating decreased repair costs in the event of a collision. This design concept is already found on the 7 series and it will trickle down throughout out the entire vehicle line up in time. We can expect to find this design on the new 3 series when it is released. 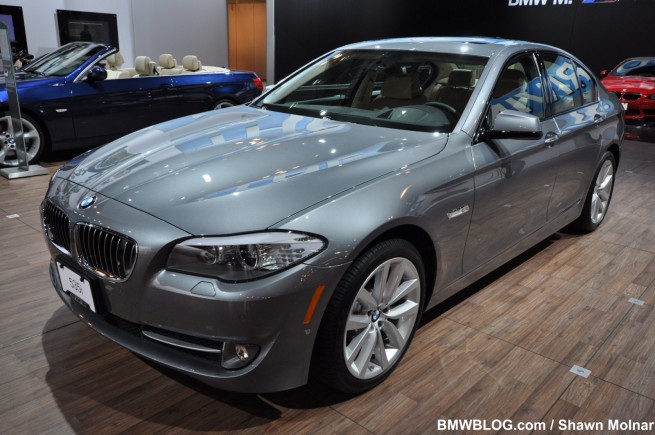 Both 5 series models will be sold with a manual 6 speed gearbox or an 8 speed automatic (we can’t praise BMW enough for their decision to offer manual transmissions across the 5 series line). If the 7 speed automatic is ordered, drivers will enjoy very fast kick downs directly from 8th to 2nd gear if necessary under hard braking. It should be mentioned that the automatic optioned 5 series now has proper paddle shifters mounted to the steering column – right for upshift, left for downshift – just like Robert Kubica’s old F1 car. BMW’s 5 series sedan will be the only sedan in its class to offer a manual transmission.

Rear seat patrons will enjoy 2 additional inches of rear leg room – the 5 series standard wheelbase (a long wheelbase version will be sold in the Chinese market) will now offer the same leg room as was available from previous generation 7 series. We’ve been given an unconfirmed tip that the new 5 series has more trunk space than the 7, it sounds hard to believe but we’ll confirm this detail in the future. 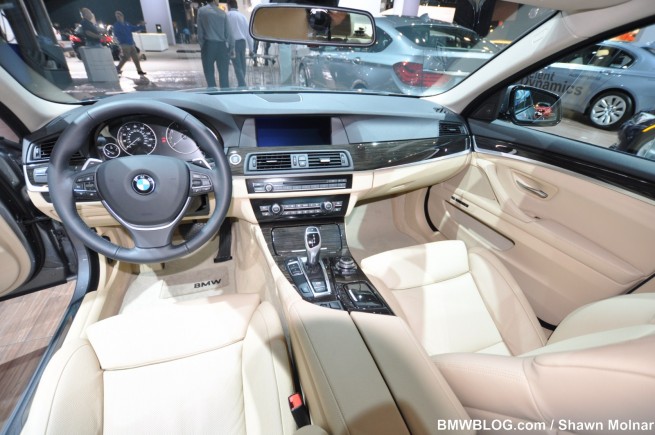 Despite more standard options than the E60 5 series including larger wheels, the F10 5 series will cost $2,500 less when ordered from your local dealership.

There are cameras and sensors virtually covering the new 5: ultra sound, infra red and radar is used to facilitate active cruise control, park assist and an amazing new technology that allows the car to determine whether or not a parallel parking space is long enough to accommodate the car before you begin parking. 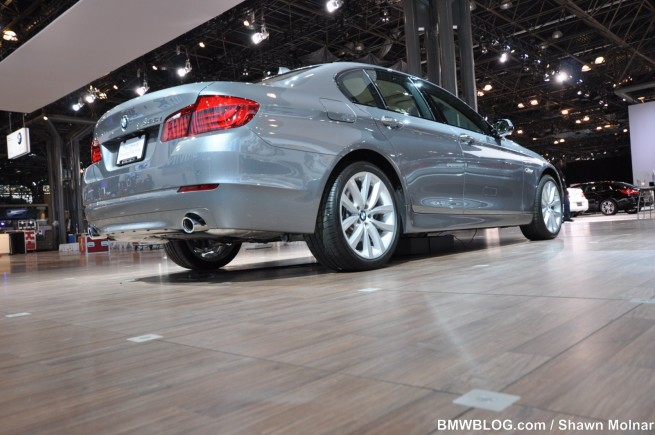 In typical BMW fashion all driver aids can be canceled because, in the words of Martin Birkmann, “many of our customers enjoy tail out driving.” Count us in Martin; the new 5 truly is a driver’s car.

Thus concludes our NY 2010 walk around, we look forward to bringing you this feature at future auto shows.