“Joy is BMW” – one of the recent marketing slogans coming from BMW and at the same time, a very controversial one. For years BMW North America has been defining their vehicles as the “Ultimate Driving Machine”, one of the most powerful and iconic marketing tagline in the automotive industry. With the launch of their newest products, BMW 1 Series, X1 and the redesigned Z4, the marketing campaigns seemed to have steered from its core branding towards the “Joy” element, and its derivatives: “Expression of Joy”, “Joy is Boundless”, “Joy is Racing” or “Story of Joy”.

The apparent shift in BMW’s marketing strategy has caused some distress in the loyal and numerous BMW community, especially due to an unfounded report that the “Ultimate Driving Machine” slogan is being phased out.

To get an official and final statement on the aforementioned marketing campaigns, we went straight to the source.

Jack Pitney, Vice President of Marketing, BMW North America, has offered to sit down with us and take some questions live from our audience.

For the first in the history of BMWBLOG, we will offer a live video interview with Mr. Pitney which will be broadcasted on our website at www.bmwblog.com/udm, as well as on USTREAM.tv.

Starting today until Thursday, March 25th, we will be taking your questions through the comment form below, as well as on our Twitter and Facebook pages. A set of questions will be compiled and Mr. Pitney will respond live during our webcast.

During the same webcast, we will be taking a few more questions through the chat room available embedded on our page or at USTREAM.tv.

Please join us next Friday, spread the word and again, thank you for your support.

Below, we have a statement from Jack Pitney, VP of Marketing at BMW North America. 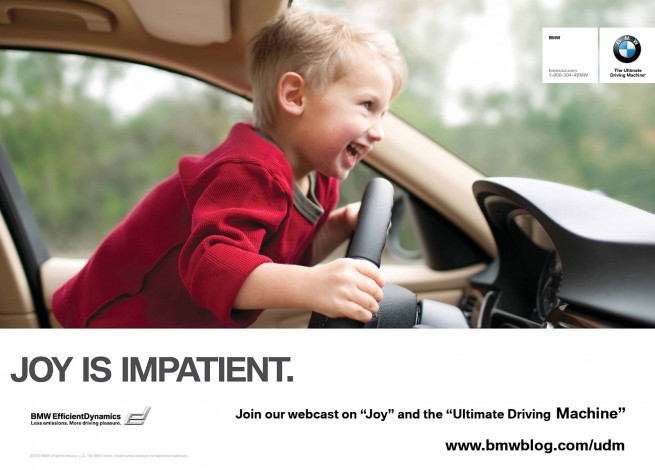 To my fellow BMW enthusiasts:

I’m writing today to clarify some unfortunate miscommunication that began several weeks ago. Precipitated by an erroneous report in the Wall Street Journal and followed by the national television introduction of our new advertising campaign, some have speculated that we are getting rid of our iconic “Ultimate Driving Machine” brand claim. Nothing could be further from the truth.

In the end it is a brand’s products that define it within the marketplace, and never has this adage been more true than at BMW. For more than eight decades our engineers have defined their mission as bringing the joy of driving to life. Put succinctly, to build the Ultimate Driving Machine. This has been, and continues to be, BMW’s core mission. And this is why our Ultimate Driving Machine brand claim has endured… it is founded on a truth that remains as relevant today as when the company was first founded.

Through our new advertising campaign we celebrate the core mission of the BMW brand; to bring the joy of driving to life. It is the end-result of the Ultimate Driving Machine.

I remain thankful that I work for a company with such a clear sense of purpose. And I remain even more thankful that we have such a devoted family of owners that are so keen to protect and defend the brand. Thank you for that.

For those interested, I invite you to join me in an on-line chat regarding our new campaign as well as some of the exceptional new products soon coming to market. With 19 new models launching over the next twelve months, we at BMW are uniquely placed to capitalize on the momentum in the market.

Thank you again for your continued enthusiasm. Truly, there is only one Ultimate Driving Machine.

Jack Pitney, Vice President, Marketing, joined BMW of North America in 1995. Working at the company’s headquarters for North America, he is currently responsible for marketing and product development for the BMW brand in the United States.

Prior to this position, Pitney was Vice President of MINI, where he spearheaded the brand’s reintroduction to the United States. Previous to this, Pitney was head of Corporate Communications, where he was responsible for BMW of North America’s overall communications strategies, media and analyst relations, TV and film product placement, and U.S. employee communications.

Before joining BMW of North America, LLC, Pitney worked at Mazda Motor of America’s US headquarters in California as Manager, Corporate Communications.

Pitney began his career in the advertising department at a local newspaper in Brooklyn, New York.

Pitney earned his Bachelor of Arts degree in political science from Occidental College. He was born in Stamford, CT in 1963.