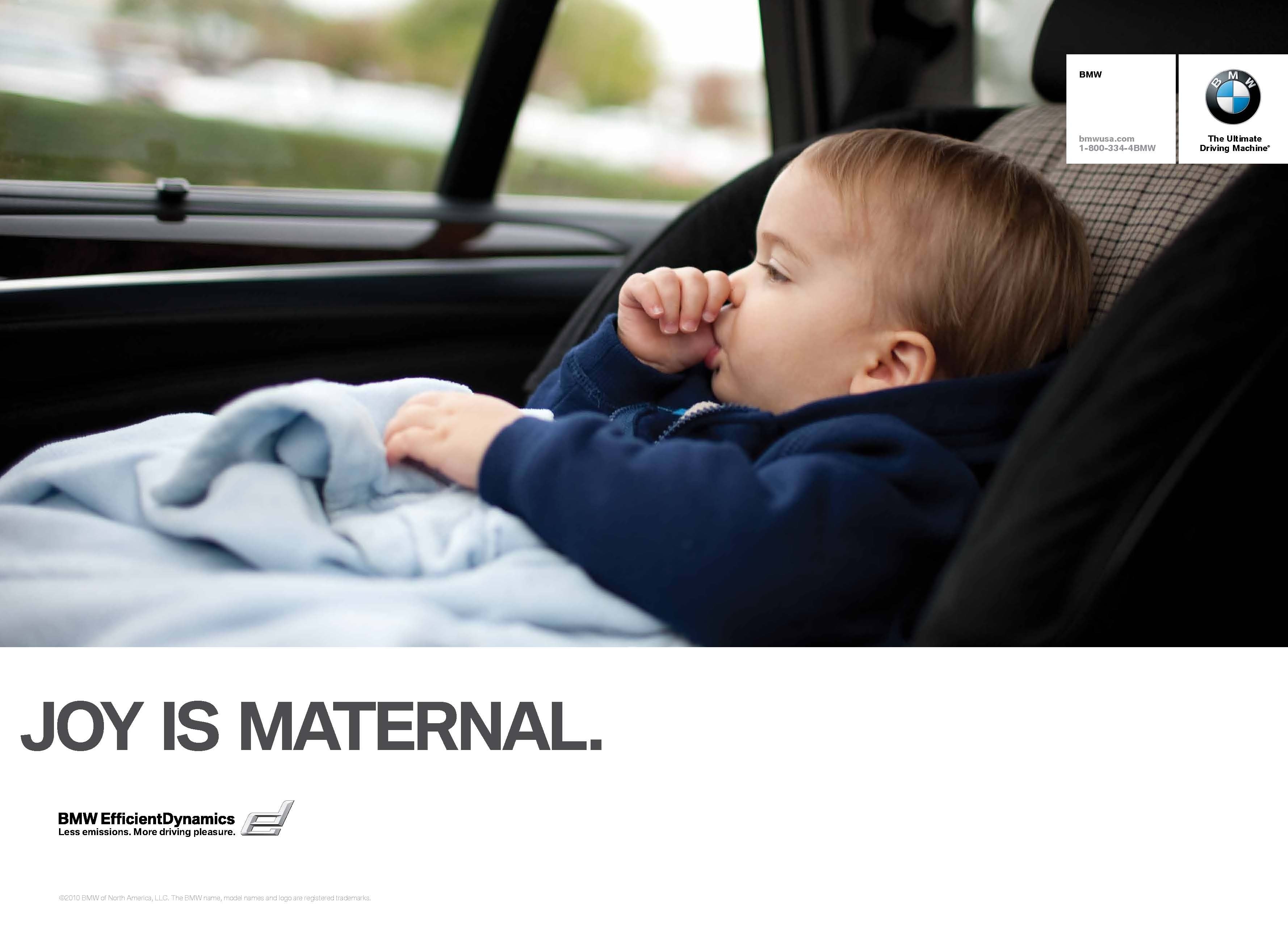 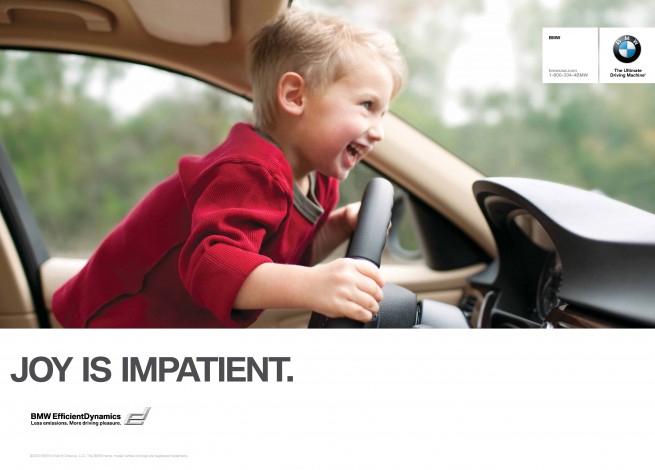 BMW of North America today launched its largest brand awareness campaign in its history – “Story of Joy.” The campaign will break during the Opening Ceremony of the XXI Winter Olympic Games and continues at a pace heavy enough to make BMW the largest luxury automotive spender of the Games. “Story of Joy” will serve as the umbrella for the automaker’s global communications.

“Story of Joy” introduces a new creative aesthetic characterized by strong, colorful images often conveying people and their experiences with the subtlest of references to BMW products punctuated by various three-word headlines leading off with “Joy Is…”

The new campaign from BMW and its global creative partner, Austin-Texas-based GSD&M Idea City, media buying agency Universal McCann of New York City, and interactive agency Dotglu of New York City, represents the largest, most comprehensive marketing initiative in the company’s history and incorporates a number of innovative elements across television, digital, mobile and out-of-home platforms. An advertising first for this groundbreaking campaign is BMW’s use of MSN’s new proprietary enhanced video capabilities for a nine-video panel homepage takeover in mid-February.

“The ‘Story of Joy’ encapsulates the sentiment shared throughout BMW that we are more than a car company. We are creators of joy,” said Jack Pitney, Vice President, Marketing, BMW of North America. “All of our efforts in engineering, design and technology are about one thing, which is creating moments of joy. Given recent trends in consumer mindsets, the campaign refocuses BMW on the joy of driving and sharing those moments in an upbeat, humanized and refreshing fashion.”

The campaign heavily incorporates high-impact television placements to run on NBC, MSNBC and CNBC during the 2010 Winter Olympic Games and the Academy Awards. Additionally, throughout NBC’s two-week televised coverage of the Winter Games, BMW will be the sole automotive sponsor of the network’s “Olympic Moments of Joy” segments highlighting the triumphant tales of real-life Olympic athletes as they unfold.

The first of two television spots, a 60-second piece entitled “Story of Joy,” will make its debut on NBC February 12th during Opening Ceremony of the Winter Games. The piece opens with a detail shot of BMW’s signature kidney-shaped grille and moves into quick-cutting “snapshots,” from contemporary and vintage video footage, creating a collage of people experiencing joyful moments of life with the products that illicit them. The voice over that closes the spot states, “We realized a long time ago that what you make people feel is just as important as what you make. And at BMW we don’t just make cars. We make joy.”

The 60-second “Tunnel” spot, which will premiere on February 15th, depicts the futuristic-looking BMW Vision EfficientDynamics Concept Vehicle driving through a dark tunnel, its image giving way to glimpses of vehicles in BMW’s product line-up as it darts in and out of shadows. At the other end of the tunnel, the entire product portfolio emerges into full daylight and the video cuts to smiling drivers behind the wheels. A voice over intones, “Every BMW is created with EfficientDynamics – technologies that maximize the joy of driving and make us the most fuel-efficient luxury car company in America.”

Multiple digital platforms and executions are also central to the “Story of Joy” campaign. In an exclusive arrangement with MSN, BMW will mount a homepage takeover on February 15th distinguishing the automaker as the first advertiser to employ the web site’s new proprietary enhanced video capabilities. The new MSN technology creates a 3-D-like display which allows users to access any of the nine BMW-sponsored “Golden Moments of Joy” video panels directly from the homepage. The interactive video panel is expected to attract nearly 125 million users in its one-day homepage takeover.

Additionally, beginning with the Olympic Games, BMW’s partnership with NBC extends to NBCOlympics.com with “Golden Moments of Joy,” a section of the web site that will feature all the Gold Medal moments, through a combination of video and still pictures framed by BMW banners, for each day of competition. Similarly, a mobile version of the site, also carrying BMW banners, will render the “Golden Moments of Joy” content easily accessible through mobile devices. Also starting in April, a “Story of Joy” experience micro-site, at bmwusa.com/JOY will run unscripted BMW-produced content highlighting real-life tales of BMW enthusiasts and owners.

High-impact out-of-home in New York City, Los Angeles and Spartanburg, South Carolina, home of BMW’s North American Manufacturing Plant and Performance Driving School, during the months of February and March round out the campaign.