Back in 2008, we were at the Chicago Auto Show for the unveiling of the BMW M3 GT2. It was the first time we had the opportunity to see the M3 racing car and also learn about the new BMW Rahal Letterman Team. Yesterday, over  a year later, for the first time we attended an American LeMans race, an event which took place at Road America in Elkhart, Wisconsin.

And for the first time, BMW Rahal Letterman scored the program’s first victory with a 1-2 finish. We’re glad we were part of the BMW Motorsport history in the U.S and we would like to thank BMW North American and BMW Rahal Letterman team for allowing us to attend the event and live an unique experience. As usual, we have some great photos and videos from this race and we will have them available to you within the next few days.

Since BMWNA Motorsport has already issued a great and short, but still detailed press release outlining the main events, our upcoming story will mostly focus on our experience behind the pit and how the team and us have “lived” this race. 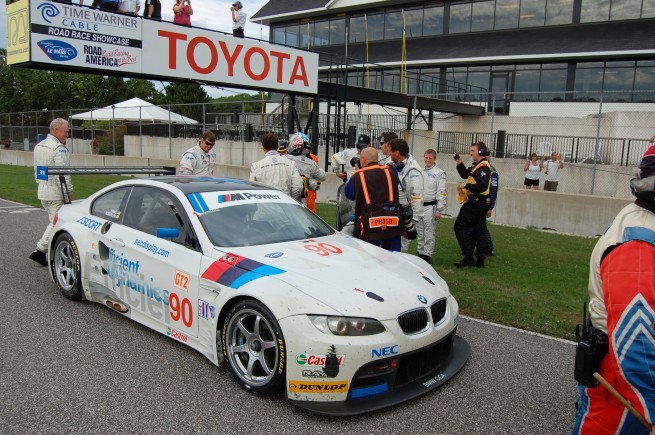 The No. 90 M3, driven by Joey Hand and Bill Auberlen, achieved the new M3 racing program’s first victory. Teammates Tommy Milner and Dirk M ller in the No. 92 M3 scored their fourth podium finish of the season.

As the race began, starting drivers Bill Auberlen, in the No. 90 M3, and Tommy Milner, in the No. 92 M3, took advantage of their front row starting positions and opened a lead on the GT2 class. Only 15 minutes in, an early yellow slowed the field, but instead of reducing the BMW M3’s lead to mere feet, it increased it to almost a full lap as both M3s received a wave-by when the pace car picked up the overall leader. Before the race went green again, both M3s were able to pit for fuel, and Milner picked up the lead through pitstop speed.

At the one hour mark Milner still held the lead over Auberlen, but as the race’s second caution period occurred a “race within the race” began. Pitting both M3s under yellow, the crew of the No. 90 M3 got Hand serviced just a tick of the watch ahead of M ller to take the lead. Unfortunately, too many men over the wall for the No. 92 M3 resulted in a 60 second penalty, putting Milner an additional minute behind Hand, but still in second place.

Pitting a second time under the race’s third caution period, the M3s cycled through two more fast stops for fuel and new Dunlop tires. Today, able to keep the competition in check, the two M3s stayed in front for the remainder the contest to open another winning chapter in the history of BMW Motorsport.

“It can’t get better than this! Great for the team and great for BMW. Everyone did a super job today!”

“Yesterday I was asked about the best moment of this program and my answer was bringing the new BMW M3s to the grid at Sebring. After today, I would give a different answer. We were fast from the beginning of the weekend and brought home the first victory for the program. We had incredible support from all our partners and especially Dunlop, who continue to deliver for us. We have now arrived at a level where we can fight for top honors and that’s what the program was designed to do. Today was BMW’s day.”

“This is what this team has earned. Everyone has worked so hard. Thanks to BMW, RLR, and Dunlop. The win seems long overdue and I can’t be any happier. Road America is where I won my first professional race and now it is where we won the first one for this team. Awesome!”

“Bill and I called this win. Babe Ruth style. I told my wife before I left that I knew something really good was going to happen. Bill got the No. 90 M3 out front and I just brought it home. The team knows how to pit like nobody else. Every part of this team pulled together today. We earned this win.”

“A great result for sure! We had one hiccup today, but in the end we overcame it. A great job by Dirk to run for second.”

Round 8 of the American Le Mans Series will be held at Mosport International Raceway on August 30th.

BMW of North America, LLC has been present in the United States since 1975. Rolls- Royce Motor Cars NA, LLC began distributing vehicles in 2003. The BMW Group in the United States has grown to include marketing, sales, and financial service organizations for the BMW brand of motor vehicles, including motorcycles, the MINI brand, and the Rolls-Royce brand of Motor Cars; DesignworksUSA, a strategic design consultancy in California; a technology office in Silicon Valley and various other operations throughout the country. BMW Manufacturing Co., LLC in South Carolina is part of BMW Group’s global manufacturing network and is the exclusive manufacturing plant for all X5 Sports Activity Vehicles and X6 Sports Activity Coupes.