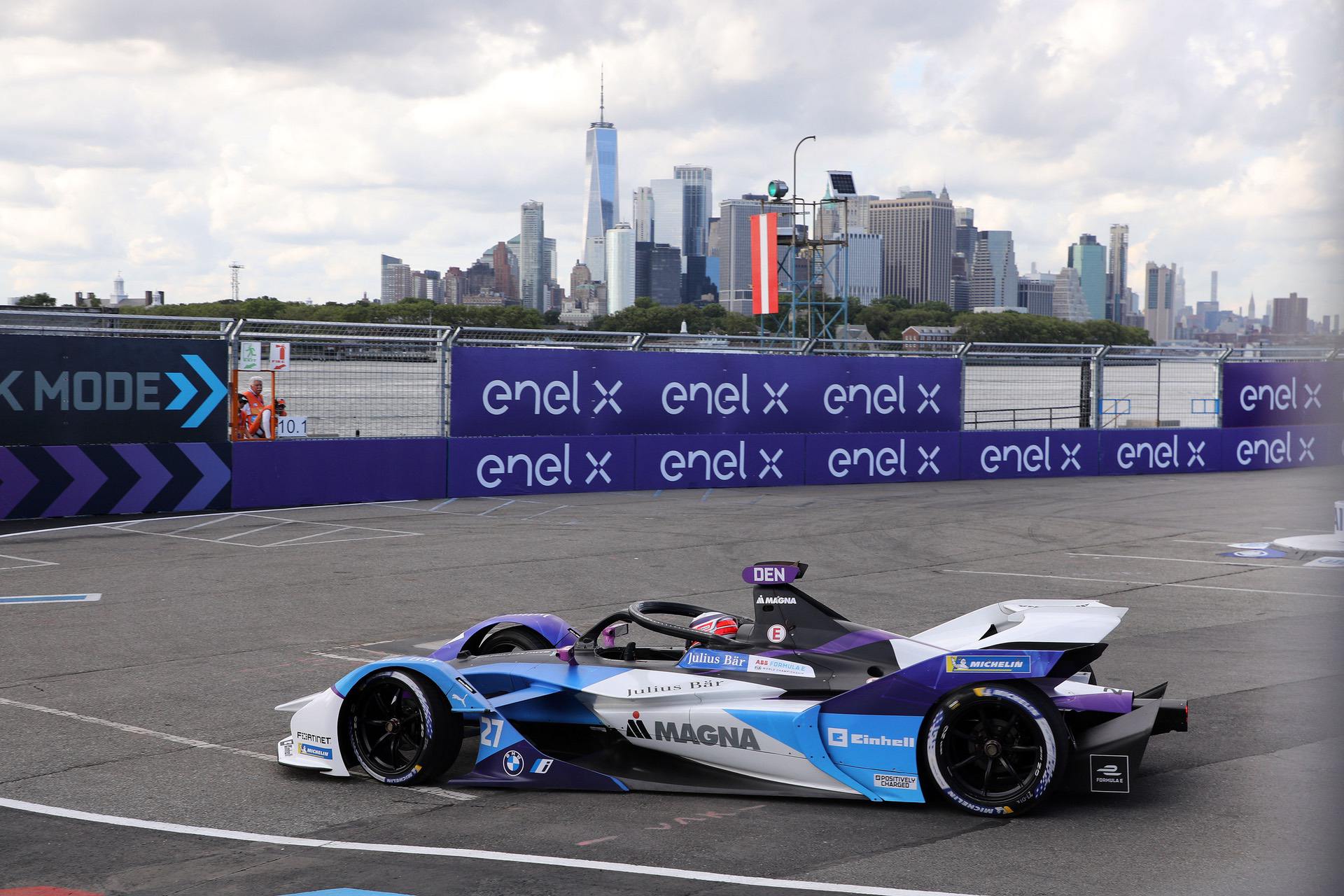 After a lengthy string of races at tracks that did not hold a Formula E race last season, the 2020-2021 Formula E World Championship calendar returned to a familiar hunting ground for the drivers — the NYC ePrix in Brooklyn, New York, in the United States.

While this track did not feature last season either, it has been a staple of the Formula E calendar since its introduction in 2017 and numerous drivers in the field were quite familiar with it. That, though, was not true for BMW i Andretti drivers Maximilian Guenther and Jake Dennis, both of whom were contesting a Formula E race on this circuit for the first time in their careers.

With the latter half of the season getting into full swing, good and consistent results were becoming imperative for a legitimate challenge at the title. After a slow start to the season, the BMW Andretti team had been garnering positive momentum over the past few rounds, with Dennis in particular racking up solid results. Guenther had improved his race-to-race consistency and was putting in superb qualifying performances, but had finished in the top-5 only once in the past five races. If Guenther wanted a chance at challenging for the title, it had to begin now.

The weekend began superbly for Guenther, who made Super Pole once again and put his BMW iFE.21 in 4th on the grid behind Nick Cassidy, Jean-Eric Vergne, and Alex Lynn. Dennis, though, was unfortunate to have his qualifying lap halted by a red flag due to a collision behind him, and was unable to do better than 15th on the grid. Speaking to TV reporters before the race, Guenther expected a fun but challenging race from P4 on the grid, with tire management and energy management at the forefront of those challenges.

Lynn actually passed Vergne for second off the line, but braked too late and ran wide into T1, falling all the way down into 5th. Guenther, in the meantime, lost a position to the fast-starting Buemi but inherited 4th from Lynn. Dennis, starting in the thick of the midfield, made a punchy start to get up to 13th by the end of the first sequence of corners, then managed to send it around the outside of defending champion Antonio Felix da Costa to snatch 12th place.

Cassidy and Vergne, running in first and second, were the fastest drivers on the track in the early stages of the race. Former champion Buemi was unable to keep up with the leading duo and that gap continued to grow while Guenther hounded him from behind. As is typical for a Formula E race though, the race remained fairly calm and processional in the early goings, with nobody daring to overconsume on energy.

Lynn was the first of the frontrunning drivers to activate Attack Mode, diving into the activation zone on the very outside edge of the Turn 10 hairpin with 39 minutes (+1 lap) remaining. It proved to be a tad difficult for him to rejoin the circuit, with the other drivers eager to remain on the racing line by the outside wall, and he fell from 5th to 8th.

On the following lap, Guenther and Lucas di Grassi, now running in 5th behind Guenther, took Attack Mode and were able to maintain 4th and 5th positions. Vergne and Buemi were forced to react on the following lap, activating Attack Mode and coming out still in 2nd and 3rd, much to the chagrin of Guenther. He would remain behind the Swiss Nissan driver for another lap. Cassidy would be next to take Attack Mode, and he would do so with 35 minutes (+1 lap) remaining, rejoining in the lead barely ahead of Vergne. There was still a large gap from Vergne in 2nd to Buemi in 3rd.

Further back, Mitch Evans in the Jaguar was able to pass da Costa for 13th, and now was right behind Dennis. Dennis took Attack Mode with 34 minutes (+1 lap) remaining, dropping into 14th behind the aforementioned pair of Evans and da Costa.

The next few minutes were critical to Guenther’s race. Di Grassi behind him took Attack Mode with 30 minutes (+1 lap) to go in the race, dropping into 6th behind Oliver Rowland in the second Nissan. At this time, Guenther crucially made the move on Buemi, diving inside the former champion at Turn 1 to move up into 3rd place and further up the road from di Grassi. While di Grassi did clear Rowland relatively quickly into Turn 6, Guenther was able to maintain a gap to the Brazilian driver. Buemi and Rowland took Attack Mode, dropping into 5th and 7th. On the next lap, Guenther took Attack Mode and was able to rejoin still in third place. He now had free track ahead of him to get after the leaders.

At this time, race leader Cassidy had yet to take his second Attack Mode and had a 3 second lead over Vergne, who had a further 4 second lead over Guenther in third. However, Guenther was doing the best on energy, with slightly more usable energy remaining than Vergne, who in turn had slightly more usable energy in hand than Cassidy. In fact, while energy management had proven to be an issue for Guenther in the previous rounds in Puebla, Guenther was doing the best on energy management out of all the front running cars in New York City.

And he knew it. At this time, he radioed in to his engineer, inquiring about the possibility of using his saved-up energy to close the gap to second place. The response was for Guenther to continue to “follow the beeps” — referring to the audio beeps coming through to the driver providing computer-optimized advice on when to apply the throttle and when to lift.

There was a brief full course yellow with 25 minutes (+1 lap) remaining in the race to remove Evans’s stricken Jaguar, which had ground to a halt outside of Turn 2 with a mechanical issue. When racing resumed, Frijns went on a charge, pouncing on Lynn for 7th place. Rowland then passed his teammate Buemi for 5th, then Frijns got by the Swiss driver as well to move into 6th. A few minutes later, Frijns passed Rowland for 5th — a great charge from the Virgin driver who had started the race well down the order.

Meanwhile, Dennis was running in 11th with one Attack Mode activation to go. He took it with 20 minutes (+1 lap) to go, coming out ahead of da Costa to remain in 11th. In the subsequent four minutes of his running with extra power from Attack Mode, Dennis was able to pass Sims into Turn 1 for 10th and then repeat the feat one lap later to snatch 9th place off of Lynn in the other Mahindra. Unfortunately, he then immediately suffered a mechanical issue, slowing to a crawl and making a stop in the pits at the end of the lap. His race was effectively over — a huge shame since he had done fantastically in recovering into the points-paying positions!

In the meantime, Guenther was gaining big on the two leaders of the race, Cassidy and Vergne. With 15 minutes (+1 lap) remaining, the top four cars (Cassidy, Vergne, Guenther, di Grassi) were running very closely, and the next four cars in 5th through 8th were embroiled in their own battle. The situation was tense for each of the cars in the top four. Cassidy, running the lowest on energy, drove defensively to keep two-time champion Vergne behind him. Di Grassi, meanwhile, was told by his team that his car temperatures were “critical” due to the dirty air from running behind a train of three cars ahead of him.

With 7 minutes (+1 lap) remaining, Cassidy was still in the lead. Vergne was getting aggressive though, perhaps due to the fact that he knew Guenther directly behind him was doing better on energy and could decide to pounce at any time. Vergne made a bit of a lunge on Cassidy into Turn 6, but this was fended off by the rookie Virgin driver. At Turn 10 of the same lap, the attack came! Vergne dove down the inside of Cassidy at the hairpin, getting ahead of Cassidy but forcing both drivers wide. Guenther, then, could hardly believe his luck as he sailed down the inside of both of them, moving into the lead! The running order was now Guenther, Vergne, di Grassi, and Cassidy, who was shuffled back into 4th by di Grassi.

Guenther now led the NYC ePrix, and had not even needed to dig deep into his energy reserves to secure the lead. He then wisely opted to deploy some of the energy he had saved up and built up a gap to the cars behind him. This was a shrewd move because it ensured that Vergne could not benefit from a slipstream from running directly behind the BMW iFE.21 of Guenther, and also protected himself from any crazy action that could unfold behind him. With 3 minutes (+1 lap) to go in the race, Guenther had pulled out almost two seconds over Vergne in second place. The last few laps were merely a formality then as Guenther controlled the pace masterfully to finish the race and win the NYC ePrix!

Cassidy managed to just hang on to 4th ahead of Frijns in 5th. The finishing order behind them was Buemi in 6th, Rowland in 7th, then Andre Lotterer, Sam Bird, and Rene Rast completing the top 10. Bird, in particular, had produced a storming comeback drive after a crash in free practice, a collision in qualifying, and starting the race from the rear end of the grid.

What a fantastic race for Max Guenther, who once again demonstrated his fantastic race management skills to claim the third victory of his young Formula E career. A great comeback race for Jake Dennis as well, who had improved from 15th on the grid to a solid 9th place before a very unfortunate mechanical issue.

After a difficult second race in Brooklyn the following day, where Dennis and Guenther qualified 19th and 23rd, respectively, it would be time for the Formula E championship to touch down in London for the first ever indoor-outdoor London ePrix. What surprises would the new track have in store?