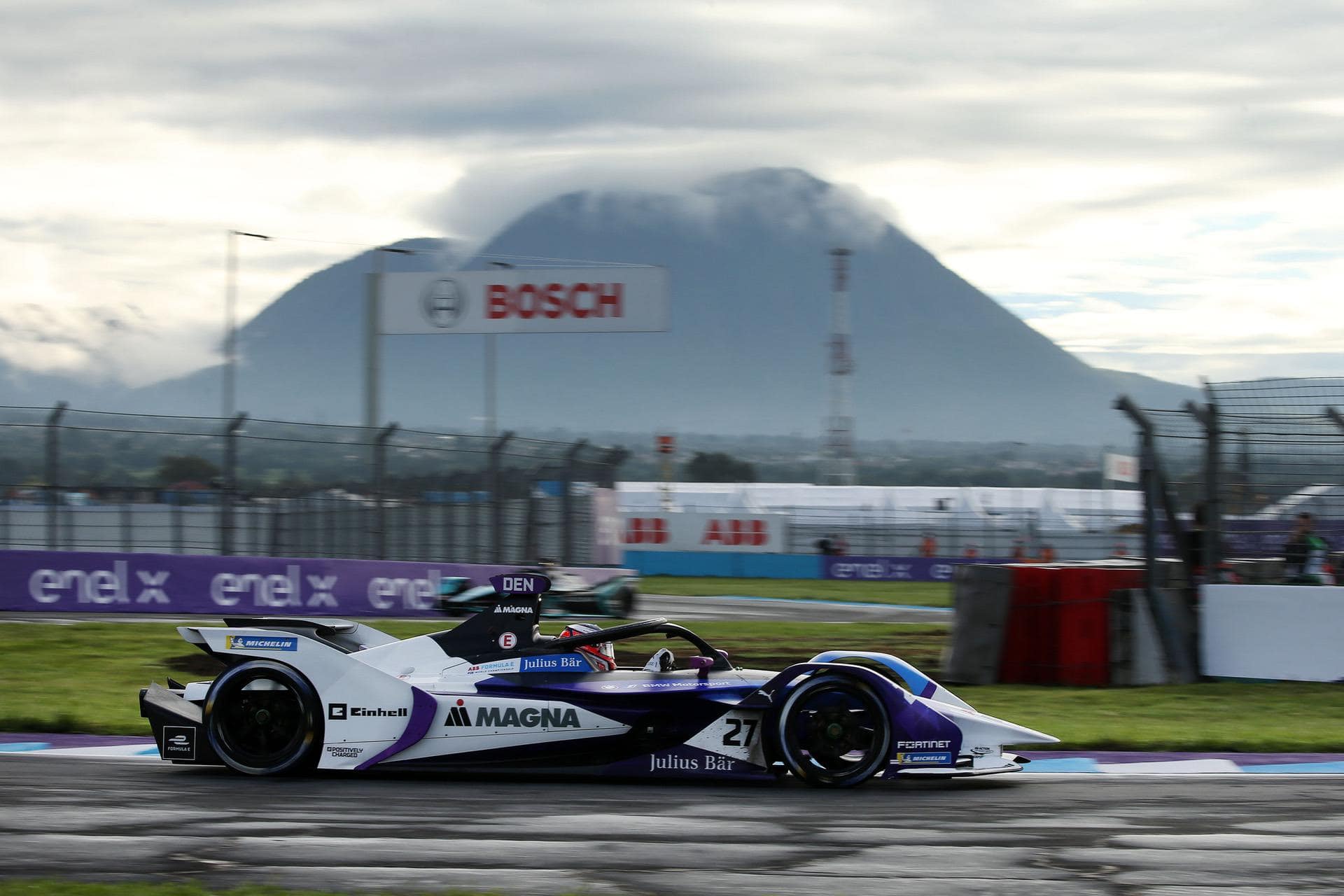 The second Puebla ePrix took place a day after the first in fine weather conditions once again. The race represented a solid step forward for the BMW i Andretti team as both drivers collected a solid haul of points to maintain the team’s recent positive momentum.

The day began very positively with Jake Dennis setting the overall fastest time in the group stages of Qualifying, which would net him an additional championship point and the privilege of going last in the Super Pole shootout. Unfortunately, his Super Pole lap didn’t go quite as planned and was only sixth fastest among the six cars that qualified through to Super Pole. He was then promoted to start fifth when Alex Lynn’s Super Pole lap was deleted for a technical infringement. Max Guenther, on the other hand, was not able to set an ideal lap in Qualifying and would line up 11th for the start of the race.

The start of the race went well for both BMW Andretti drivers, as Dennis got around the outside of Jean-Eric Vergne in the Techeetah to promote himself into 4th, while Guenther was able to carve out two positions to get into 9th place. As the race progressed, Guenther was quite conservative in his approach, perhaps in an attempt to avoid what had happened the previous day. He slipped back behind Andre Lotterer into 10th, and then was passed by former teammate Alexander Sims for 11th about 7 minutes into the race.

The Attack Mode activation zone had opened by this time. Polesitter Oliver Rowland, eager to make amends for the misfortune that had befallen him in the previous race, was an early customer as he dropped back into 4th place behind Dennis initially. Edoardo Mortara, who had qualified in third, was next to take Attack Mode. He, too, dropped behind Dennis before making use of the extra 35 kWh of power to get back ahead. Vergne was then able to sneak past Dennis as well, demoting the Englishman to 5th place.

Pascal Wehrlein followed by activating Attack Mode, then Rowland emulated Wehrlein’s strategy in the first race by taking a very early second Attack Mode — with 34 minutes (+1 lap) still to run in the race! The running order of the top five at this time was Mortara, Wehrlein, Rowland, Vergne, and Dennis.

Approximately five minutes later, things began kicking off in the midfield. Vergne, Dennis, and Alex Lynn, running 4th, 5th, and 6th, simultaneously took Attack Mode, emerging from the extra loop at Turn 8 in 6th, 7th, and 8th. Guenther took Attack Mode that lap as well, dropping down into 13th but making quick work of Stoffel Vandoorne in the Mercedes to get back into 12th. Guenther then got a dose of good fortune a lap later — Lotterer, who had activated Attack Mode, overcooked it into Turn 11, allowing Sims to get alongside him.

But in defending his position, Lotterer left no room for Sims and squeezed the Mahindra driver into the advertising boards lining the side of the track. With Sims’s momentum hampered, Guenther was able to pounce on Sims going into Turn 1 on the following lap to promote himself up into 8th place.

Vergne, Dennis, and Lynn somehow ended up taking Attack Mode together once again, with all three drivers electing to activate Attack Mode almost immediately after their first stint of Attack Mode ended. The trio dropped to 5th, 6th, and 7th, behind Virgin Racing’s Nick Cassidy, who was doing a fine job running in 4th place behind the three leaders. With Dennis bottled up behind Vergne, he had little choice but to race at the pace of the Frenchman.

This would prove detrimental to his race when Cassidy was able to build up a gap and take his second Attack Mode activation and emerge ahead of this trio, meaning that Dennis was now running in a net 6th place. Guenther, in the meantime, activated his second Attack Mode stint and was able to stay ahead of Sims to maintain 8th place a good distance behind the aforementioned trio of cars that Dennis was a part of.

The rest of the race saw a game of cat and mouse between Vergne, Dennis, and Lynn, running nose-to-tail (incidentally, Lynn is very familiar with the rear of Dennis’s car, having sat in the BMW iFE.21’s slipstream for almost the entire Valencia II race a couple of months ago). But with 9 minutes (+1 lap) remaining in the race, Vergne lost control in Turn 9, spinning wide and gifting 5th place to Dennis! This dropped the Techeetah driver into the clutches of Guenther, and the young German was able to pass Vergne into Turn 1 for 7th place despite a massive lock-up.

Vergne’s teammate, the defending champion Antonio Felix da Costa, made a mistake going into Turn 7 and slammed into the wall with 7 minutes (+1 lap) remaining in the race, bringing out yellow flags in the area. Remarkably, da Costa was able to maneuver his stricken Techeetah out of the way, so no stoppage in the race ensued. With the top four drivers well ahead, Dennis focused on maintaining his 5th place for the remainder of the race.

Guenther, who had saved up a good amount of usable energy, was able to claw back the deficit to Lynn and reeled the Mahindra driver in over the closing laps of the race. Unfortunately, the end of the race came too soon and Guenther would settle for 7th place — a solid result, considering that he had started the race from 11th place.

Two straight Super Pole appearances and subsequent top-five finishes for Jake Dennis clearly indicates that the British rookie is getting well-accustomed to Formula E and growing in confidence race by race. Dennis performed strongly in many races in the first half of the season, getting up to speed remarkably quickly on series-specific skills such as energy management.

His issue had been in qualifying, where he often was not able to hook up a representative lap and thus would have to start the race on the back foot. So even with a solid race performance, points had not been easy to come by. Now, though, after a series of impressive performances stemming from three Super Pole appearances, Dennis has scored 50 points in his last four races after accumulating just 4 in the first five races.

Max Guenther, on the other hand, has been in a sort of mirror situation to that of Dennis. Now in his second full season of Formula E, Guenther’s qualifying pace has been blistering, as he has qualified in the top 5 a series-leading five times. However, the race pace has not always been there for him, as evidenced by races such as Valencia I and Puebla I.

Today’s performance, however, marked a tangible improvement for Guenther as he was able to bag some good points despite having starting outside of the top 10. Will he be able to keep his foot on the gas and keep the positive momentum going into the next doubleheader in New York City?