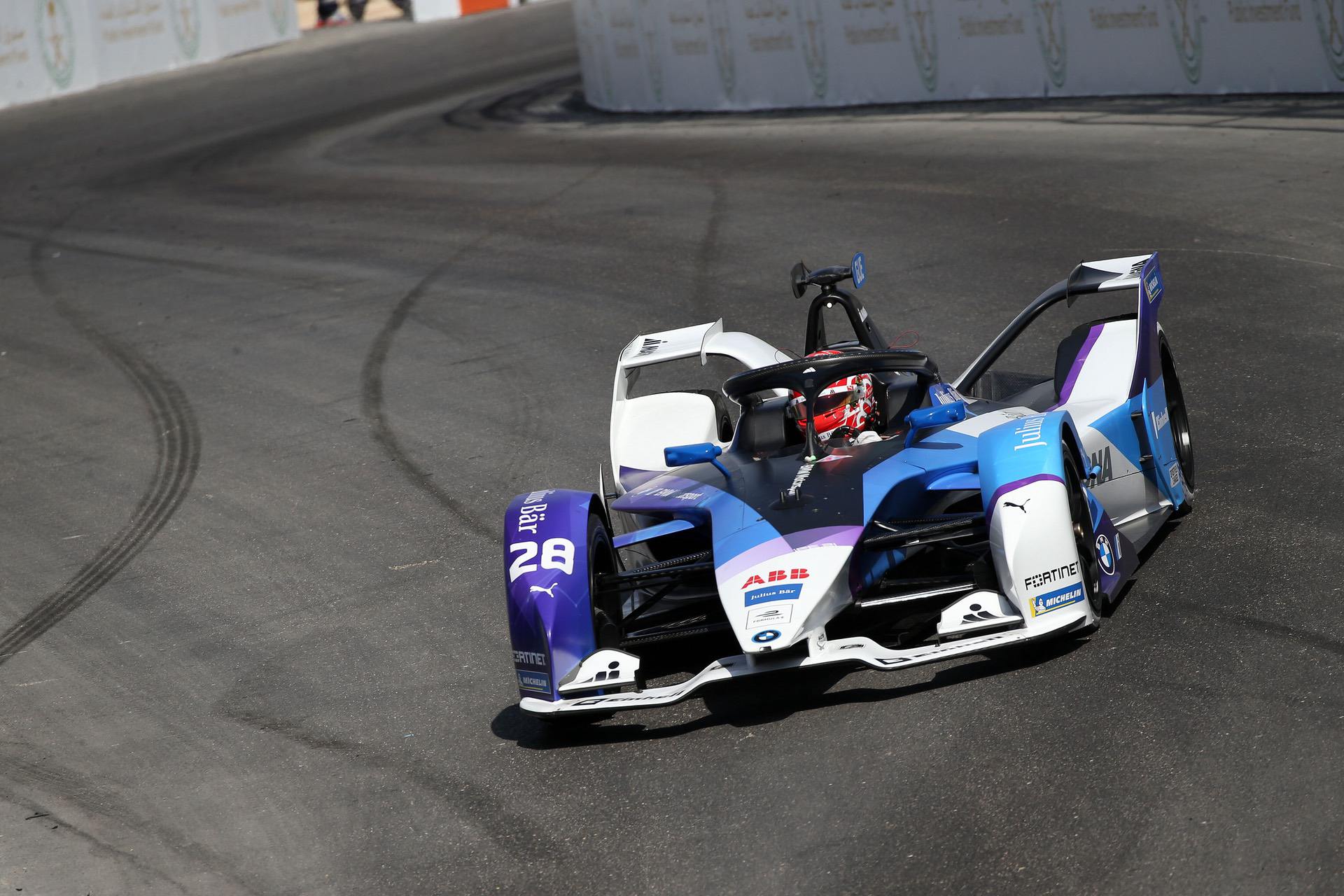 The 2020-2021 Formula E World Championship began this month on the streets of the UNESCO World Heritage site in Diriyah, just outside the Saudi Arabian capital of Riyadh. Due to the Santiago ePrix being postponed due to coronavirus-related restrictions, the Formula E season would begin with a doubleheader in Saudi Arabia for the second season in a row.

But this season’s races would be different from last year’s because of one major reason: the races this year would take place at night. With floodlights illuminating the entire circuit, it was a perfect chance for the Formula E constructors to show off their new liveries for the season. But the BMW i Andretti team would not be one of those teams with a significantly updated livery. In fact, it had been announced several weeks in advance of the season opener that this season would, sadly, be BMW’s last in Formula E for the foreseeable future. As a longtime BMW Motorsport fan, I was deeply disappointed that this promising partnership would only last three seasons.

With this being BMW’s final season of involvement in Formula E, it was imperative to make it count. Young German driver Maximilian Guenther, whom I have written at length about, would return for a second season with BMW Andretti after winning two races last season. The other seat went to a British rookie, Jake Dennis, with a rich history in racing in numerous different disciplines.

Back to the night racing aspect: With no sun shining down on the asphalt, the drivers and teams were all wary of the fact that it would take longer to generate heat in the tires and brakes. The cooler surface would actually promote higher grip for the tires as well, leading to faster lap times, and potentially more need to save energy throughout the race.

Unfortunately, the first weekend of the return of the Formula E world championship would be quite a disastrous one for BMW i Andretti. Between the four starts of Guenther and Dennis across two races, the only finish would be a 12th placed finish for Dennis in Race 1. As a result, BMW i Andretti leave the opening weekend of Formula E as the only team with no points to their name. However, the team and its fans can take solace in the fact that DS Techeetah, the runaway constructors’ champions last season, left last season’s Diriyah doubleheader with only 7 points to their name. There are more races this season than there were last season and there is still time to figure things out and turn things around.

Despite qualifying 12th and 17th, respectively, Guenther and Dennis would start Race 1 in 9th and 14th positions due to controversial penalties incurred by Nick Cassidy, Tom Blomqvist, and Nico Muller, who were hamstrung when yellow flags were shown at the last corner following Sergio Sette Camara’s crash there in Group 4 of Qualifying. It was a good start for Guenther, who managed to sneak past Andre Lotterer, who ran wide at Turn 1, and Sam Bird, to move into 7th. Dennis, in his first ever Formula E race start, dropped to 16th after a conservative approach to the first few corners of the first lap. Guenther was unfortunately unable to contain the pace of the Jaguar behind him, and Sam Bird slipped past him in a relatively straightforward move into Turn 18 on the second lap.

With 38 minutes (+1 lap) to go, the Attack Mode activation zone was opened. Last season’s races showed that strategically, it was advantageous to take Attack Mode early to perform a sort of ‘undercut’ on the car ahead. However, two considerations had to be made. The first is that, with the Attack Mode activation zone well off the racing line in Turn 19, it would be easy to lose positions whilst arming the car with Attack Mode, and the time lost battling back could prove decisive in one’s battle with the cars in front. The second is the amount of dust and dirt collecting over the previously untouched Attack Mode activation zone — whoever armed Attack Mode early would suffer the lack of grip resulting from picking the clag up onto their tires. This could be why no one took Attack Mode as the Jaguars of Mitch Evans and Bird battled with Alex Lynn in the Mahindra just ahead of Guenther. All four cars were closing in on Edoardo Mortara’s Venturi in 4th place. Finally, Bird was able to pass Lynn for 6th place.

With around 32 minutes (+1 lap) remaining, things started getting feisty at the sharp end of the field. Rene Rast made a move in his Audi to snatch 2nd place from Porsche’s Pascal Wehrlein around the outside of Turn 18, and the Porsche driver immediately took the chance to activate Attack Mode. On that same lap, Lynn got back at Bird to re-pass the Jaguar for 6th place. Jake Dennis, in the meantime, took Attack Mode as well and fell to 20th place. He was able to recover two positions, passing two-time Formula E race winner Robin Frijns and two-time Formula E champion Jean-Eric Vergne to get back in 18th place.

With 26 minutes (+1 lap), the racing started getting truly spicy. Edoardo Mortara, having lost some positions arming his Venturi with Attack Mode, made an all-or-nothing scything move between Evans and Wehrlein to pass both his rivals into Turn 18. It was a move that could have easily ended in disaster. Speaking of disaster… On the very next lap, Bird went for a dummy move, faking outside before darting down the inside of Lynn. Lynn, however, closed the door hard on Bird, and the two cars collided, ending up facing each other as Lynn spun ‘round. Guenther made his way past the two and was now running in 6th place! Dennis, meanwhile, was running in between the two Techeetahs of Antonio Felix da Costa and Vergne. If Dennis had been told prior to the season that he would be duking it out with both Techeetah cars in the first race of the season, he would have probably been happy to take it. But as it happened, group stage qualifying put da Costa and Vergne towards the rear of the grid for the start of the race, so unfortunately the trio were fighting for 15th place.

Following the incident between former teammates Bird and Lynn, the BMW i8 safety car was deployed for the first time this season with 23 minutes (+1 lap) remaining in the race. This put Guenther, in 6th place, and Evans, in 5th place, in a tough spot because neither driver had taken Attack Mode yet. Unfortunately, this would not matter in the end, as Guenther had a race-ending crash with 11 minutes (+1 lap) to go one lap after the safety car restart. As is often the challenge in Formula E, it was difficult to find the balance between speed, heat, and grip following the safety car restart, and Guenther went wide in Turn 3 and hit the wall hard at Turn 4. His race was over.

This brought out the safety car again, and it would remain on track until 5 minutes (+1 lap) were left in the race. With such little time remaining in the race, there was a mad rush to activate Attack Mode for the final time before the race’s end, as failing to do so would result in a hefty penalty. In all of the madness, Dennis was able to move into 13th position. Then, as the final laps of the race took place, many cars were running low on remaining usable energy. On the short run to the line following Turn 21 on the final lap, Dennis was able to snatch 12th place away from former champion Sebastien Buemi! It was a little argy-bargy as Buemi slowed to a crawl on the racing line and Dennis was forced to take evasive action, sort of ‘crashing past’ Buemi to take the checkered flag.

Overall, while the result of this race was disappointing, it did showcase some promising points. One was that Guenther was running strongly and in line for a solid points haul before his crash. This demonstrated the pace of the BMW iFE.21. Another was that Dennis, in his first ever Formula E race, managed to balance his race craft and energy management and car temperature management very well en route to a promising 12th place finish. Formula E is notoriously difficult for rookies to adapt to, but Dennis did well in his first race and undoubtedly learned a lot from the experience. The next race would take place one day later, at the same track.