Over the last few days, we’ve had the chance to spend some quality time with the all-new BMW M3 and M4. Of course, BMW “twisted our arm” to drive the cars as well, but unfortunately there is an embargo on that until March 10, 2021. So while some of that footage and driving impressions is off limits for now, we did manage to get the next best thing: a sound comparison of the G80/G82 M3/M4 with the previous generation F82 M4.

On top of that, we also brought to the this exhaust fight the V8-powered and future BMW classic – E92 M3. Not a fair comparison by any means, considering it’s a naturally-aspirated engine versus turbocharged motors. But for entertainment purposes, we went for it. 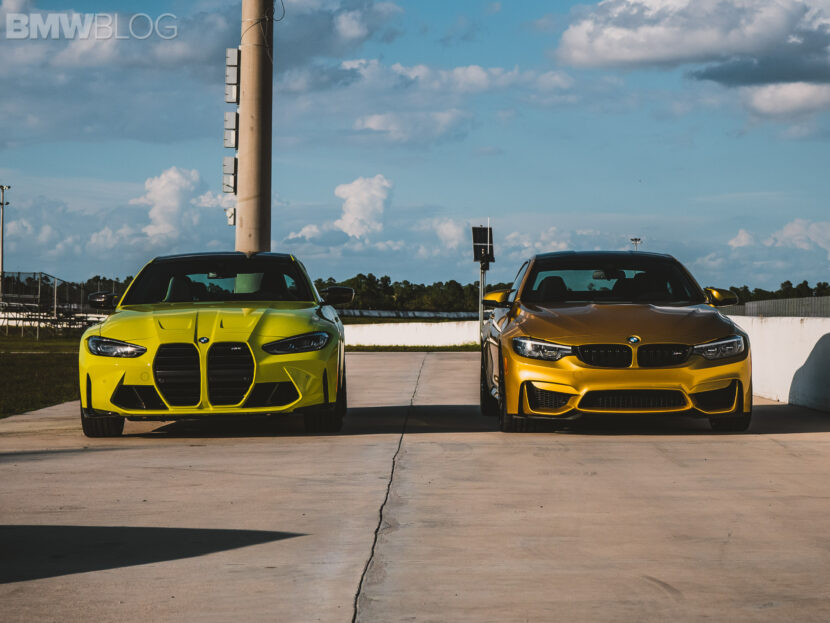 Unfortunately, it was a quite windy day at the Palm Beach International Raceway, so we had to crank up the noise/wind filter on our Rode microphone. So the final sound came out a bit more artificial than we wanted. But it should still give you a good idea of what the new S58 engine sounds when compared with the S55 in the F80/F82 generation.

We do look forward for our next encounter with the two cars, hopefully indoor so we can bring sound engineers with us t0 capture some high fidelity exhaust notes. So what’s the takeaway? In a nutshell, the V8 will always win this fight, so we’ll have to ignore that obvious outcome. But when it comes to the S55 vs. S58, things are a bit more complicated.

Overall, the engineering behind the two is similar, but the S58 is based on the B58 engine which is already a great sounding unit. Therefore, the S58 3.0 liter six-cylinder gets those heavy deep rumbles upon start – especially once the valves are opened. Revving up the engine and you’ll get the pops and bangs which are present in the X3 M and X4 M as well.

So in our opinion, the S58 has a “sportier sound” which matches the outgoing character of the car. Naturally, just like car’s styling, the sound is subjective, but we would love to hear your opinion on the video below. Also don’t forget to subscribe to our channel for some upcoming M3/M4 videos.