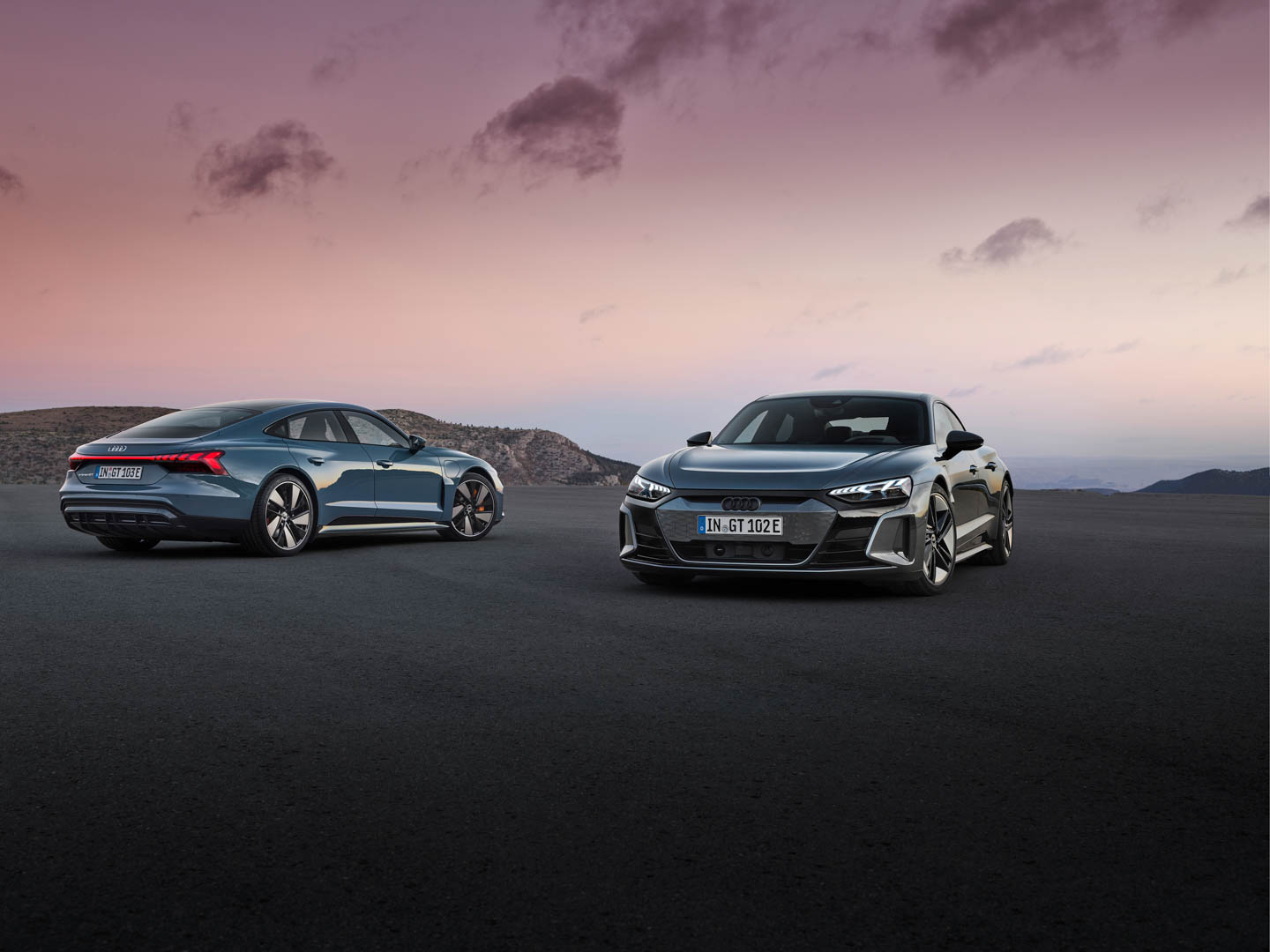 This has been a long time coming. The Audi e-tron GT Concept debuted in 2019 and we’ve been eagerly awaiting its reveal ever since. That reveal was supposed to be at the tail end of 2020, yet Covid issues delayed it until today. Now, it’s finally here and it brings a higher-performance version with it — the Audi RS e-tron GT.

It’s no surprise that the Audi e-tron GT looks similar to the Porsche Taycan, as they both share the same underpinnings. However, the Audi is arguable the sexier of the two cars, with sharper lines, more muscular wheel arches and far more interesting lighting. It’s positively stunning. In fact, the e-tron GT is arguably the best looking Audi since the original R8.

The Audi RS e-tron GT also gets a unique high-strength, five-later carbon fiber roof as-standard kit. It’s the first time any Audi model has been offered with a carbon roof as standard equipment and it’s also the only EV in its segment that offers it.

On the inside, all e-tron GTs come with what Audi calls a “monoposto” design, which means “single-seater” in Italian. The idea is to evoke the spirit of Formula E cars with the cabin of the e-tron GT by angling the car’s MMI screen and Virtual Cockpit toward the driver. Of course, it’s not a true monoposto design, as there are four seats inside the car, but it’s inspired by racing cars and even the Audi PB18 e-tron Concept from a few years go.

The cabin also comes with a vegan-friendly, animal-free interior as-standard. While Nappa leather is optional, the standard interior is made from a recycled material called Dinamica, along with some Alcantara. For eco-minded enthusiasts, this is actually a big deal, as there are many customers that would prefer to not use any animal-sourced materials and few brands offer such options.

But the real reason you’re here is power and performance and the Audi e-tron GT — especially the RS e-tron GT — has plenty of both. Both cars get two permanently- excited synchronous (PSM) electric motors, one at the front axle and one at the rear. Depending on which e-tron GT you get, they come with different power levels. However, both have a two-speed transmission, similar to the Porsche Taycan, which allows for rapid acceleration but also a taller second gear for highway cruising.

Lying in the belly of the Audi e-tron GT’s seductive body is a 93.4 kWh battery that features a unique integrated cooling structure that draws heat away from the battery. This allows for more consistent battery temperatures, which not only provides more stable high-speed charging but also the ability to accelerate at full power over and over again, without overheating. It also allows the battery to sit inside an aluminum frame for improved structural rigidity.

Just like its Porsche Taycan sibling, both the Audi e-tron GT and RS e-tron GT get 800-volt charging as-standard. That allows for 270 kW DC fast charging, which will charge the battery from 5-80-percent SOC (State of Charge) in just 22.5 minutes. So if you’re low on juice, a quick stop off, a cup of coffee and a bathroom break later and you’re back on the road with nearly a full battery.

Audi has also given the e-tron GT twins an upgraded air suspension over the standard e-tron models. It’s a new three-chamber air suspension setup that provides 60-percent greater capacity, which allows it to have a better duality between comfort and sport modes. The new air suspension is also height adjustable — 22 millimetres down at its lowest and 20 millimetres up at its highest — and each corner can be adjusted independently by the central control unit, dubbed ECP (Electronic Chassis Platform). The air suspension also works in tandem with the adaptive dampers.

To further increase the e-tron GT’s precision and driving dynamics, an electronic locking differential sits at the rear axle, allowing the rear motor to very the torque split between the rear wheels. Rear wheel steering also increases its agility and effectively shortens its wheelbase.

On paper, the Audi e-tron GT isn’t as impressive as something like the new Tesla Model S Plaid Plus or the Lucid Air Dream Edition, both of which sport faster 0-60 mph times and double the range. However, the e-tron GT is an interesting car because it’s essentially a Porsche Taycan, only with better looks at a much cheaper price.

It looks stunning, packs more than enough performance and range for the majority of customers and is priced competitively in the segment. When it goes on sale this Summer in the U.S., we hope that customers take to it, as its success would help bolster Audi’s success in the EV world altogether.