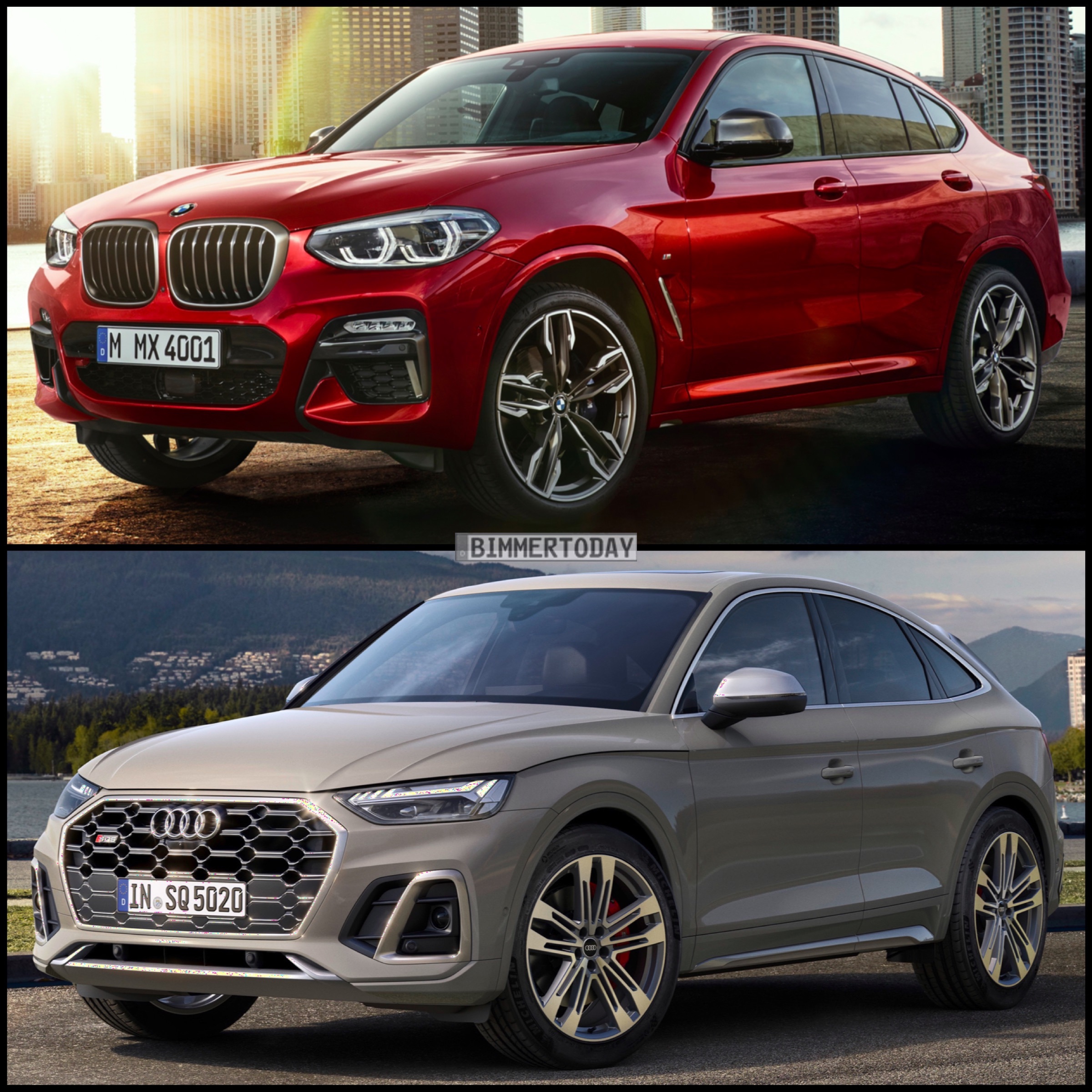 The Audi SQ5 Sportback TDI is just the latest in a long line of performance crossover coupes. BMW is the creator of such vehicles, with the original X6 being the first. Now, though, the market is positively flooded with these pseudo-sporty crossovers and customers are spoiled for choice. Now that the SQ5 Sportback TDI is here, let’s take a look at how it compares to its closest competitor, the BMW X4 M40d.

On paper, the two cars are very similar. Both use 3.0 liter six-cylinder, turbocharged diesel engines (I6 for the BMW and V6 for the Audi) and both make similar power. Both cars make around 340 horsepower and 516 lb-ft of torque (700 Nm). Both also use eight-speed automatic transmissions and have all-wheel drive. But we haven’t driven the new SQ5 Sportback yet so we won’t judge which cars on their performance or how they drive. Instead, we’ll take a look at their designs.

From the front, neither car is particularly pretty. We’re not sure how we feel about the SQ5’s new facelift, as it’s not as handsome as the pre-facelift car. However, it seems a bit cleaner than the BMW X4’s face. There are a lot of different, unnecessary lines in the X4’s face, lines that don’t seem to mesh well with one another. That said, there’s much less fakery in the X4’s face, with fewer fake grilles, so there’s more function to its form and that’s admirable. Still, from a purely aesthetic perspective, we think the SQ5 is sharper and sportier looking.

Out back, it’s again a case of which car is the least worst looking. Neither car has a particularly good looking bum, as they’re both a bit dumpy. However, the BMW X4 takes the win by default, due to the Audi SQ5 having fake “quad exhaust” tips. While the fakery is merely annoying up front, fake exhausts are downright unforgivable. If you don’t want exhaust tips, just keep the bumper flat. Don’t add fake quad pipes, with black plastic inserts. It’s insulting. The BMW X4’s exhausts are real, so it wins.

In profile, it’s clear that Audi is a bit more hesitant to go full-blown “coupe” with its design. So the Audi SQ5 Sportback is more traditional looking than the X4, which fully embraces its coupe-like styling. However, it’s still the SQ5 that takes the win here. It’s silhouette is smoother and cleaner, while its body lines are sharper and crisper. The single, unbroken shoulder line of the SQ5 that accentuates its wheel arches is the standout and really looks sharp. So the Audi is better looking from the side.

Inside, both cars have very handsome, simple and typically German interiors. The Audi SQ5 Sportback has a sharper, more tech-forward interior that’s a bit easier on the eyes. While the X4 has a sportier, more driver-centric looking cabin. It really comes down to what you prefer. If you want something simpler and more driver-oriented, the BMW is going to suit you. If you want more tech and a bit more flash, the Audi SQ5 is your jam.

Overall, the Audi SQ5 Sportback is the better looking car. It’s more modern, its lines are crisper, it looks sportier and its cabin has more tech. However, we’ve driven the BMW X4 M40i and M40d, along with the pre-facelift Audi SQ5 and the BMW is the superior driving machine, without a doubt. So we’d probably take the Bimmer to actually own but the SQ5 is a bit nicer to look at.