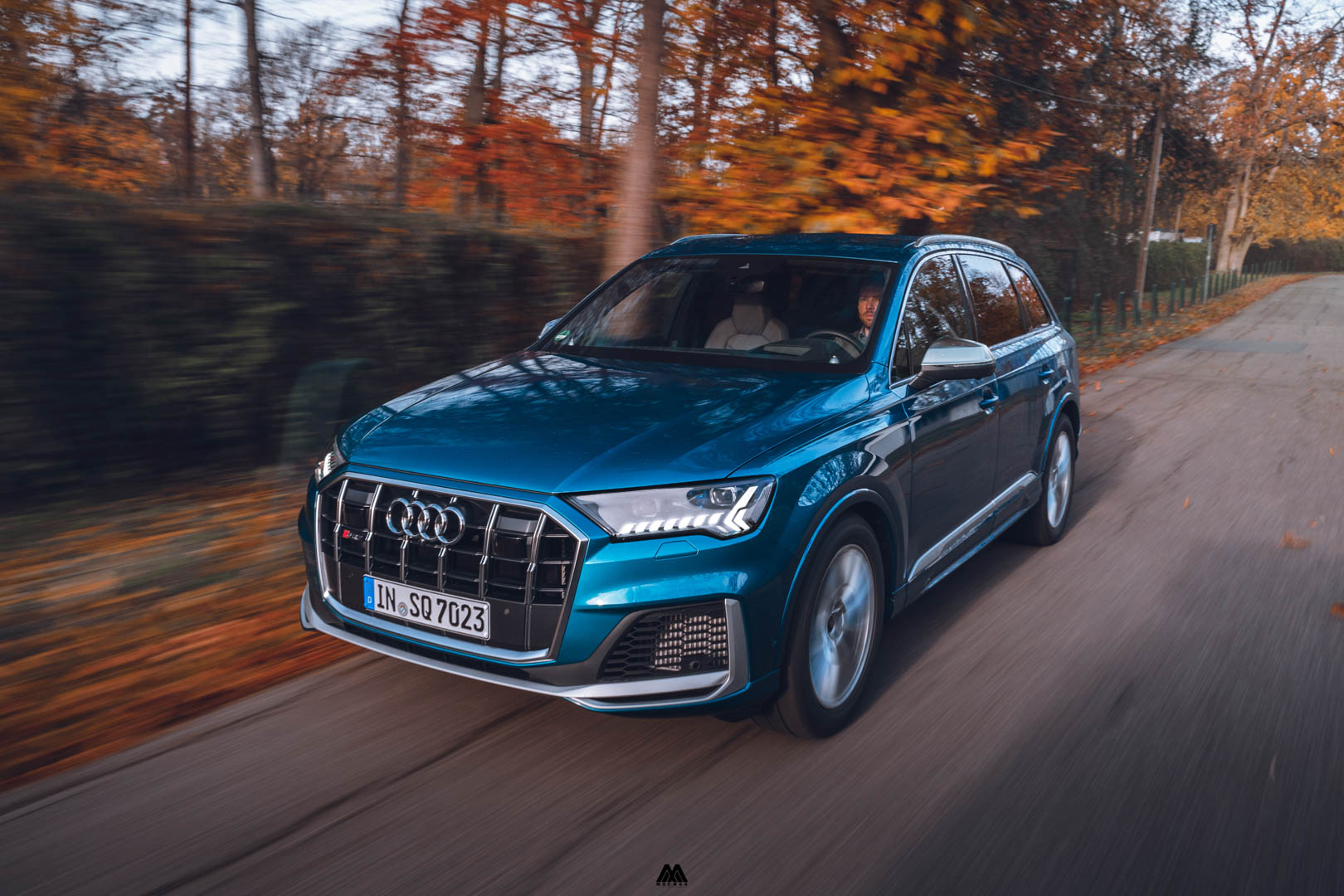 The new Audi SQ7 has arrived and it has done so with a twist. Some of you might remember the previous model and Audi’s mind-bending decision to fit a diesel engine in the front of the hottest Q7. The Bavarians from Ingolstadt have now turned their heads into the right direction and ditched the old V8 diesel, instead fitting their 4.0 liter twin-turbocharged V8 petrol engine. Not a move aimed at the European market, although we cheer for the change of heart, but to boost SQ7 sales in North America and China, where performance diesels remain non-existent and large, powerful SUVs like this are in demand. 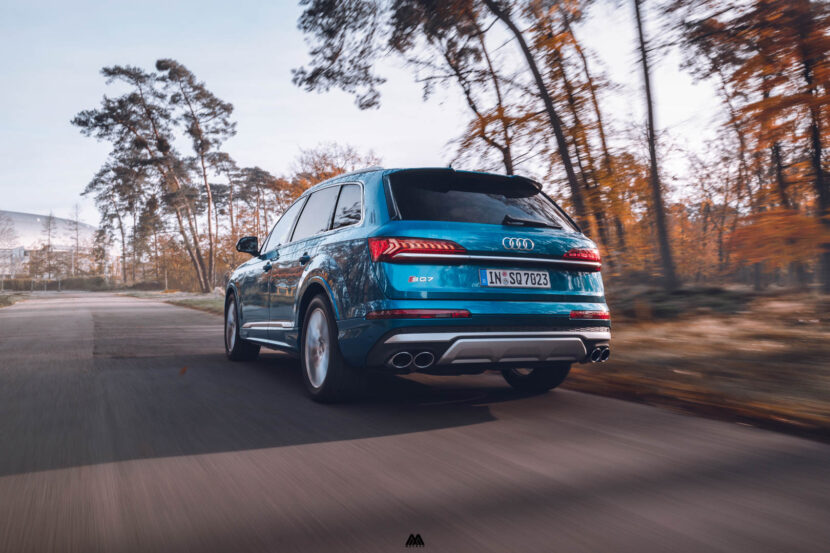 With the engine being the noticeable difference to its predecessor let’s discuss its character first. The V8 set up inside the seven-seat SUV offers you that flexible and rewarding feedback from the engine which outputs a lovely V8 tone, absent in the diesel variant. Of course, 130 Nm (95 lb-ft) of torque has left, which means that the experience has shifted from torque to noise and that is in this world of stricter noise regulations a welcoming feature. Another benefit is that the new SQ7 is 100 kgs lighter than before, which is helpful as well.

From a point of fuel consumption, the vehicle has flipped a coin. Even with the cylinder on demand system, which deactivates four cylinders temporarily by switching off the injection and ignition and keeping the intake and exhaust valves closed, the SQ7 now has a greater drinking problem. Not something the Americans nor the Chinese will be annoyed about, but looking at the fuel bill after my first fill up I got a déjà vu of the time I drove a G63.

The smooth engine performance, spontaneous response and its mighty forward trust via its eight-speed gearbox – which never lets you down – is combined with a standard fit four-wheel steering and S-specific adaptive air suspension. Additionally you can opt for a sport differential and some trickery fitted under the floor of the trunk. They call it Audi’s Active Roll Stabilization system or eAWS, which is nothing other than a system which controls the stabilizers via electric motors reducing roll in higher speed corners. The car leans into the curve considerably less, and handling becomes even more taut. There is some real trickery going on here. The drive energy for the EAWS is provided by a super capacitor that operates with a state of charge of 48 volts. 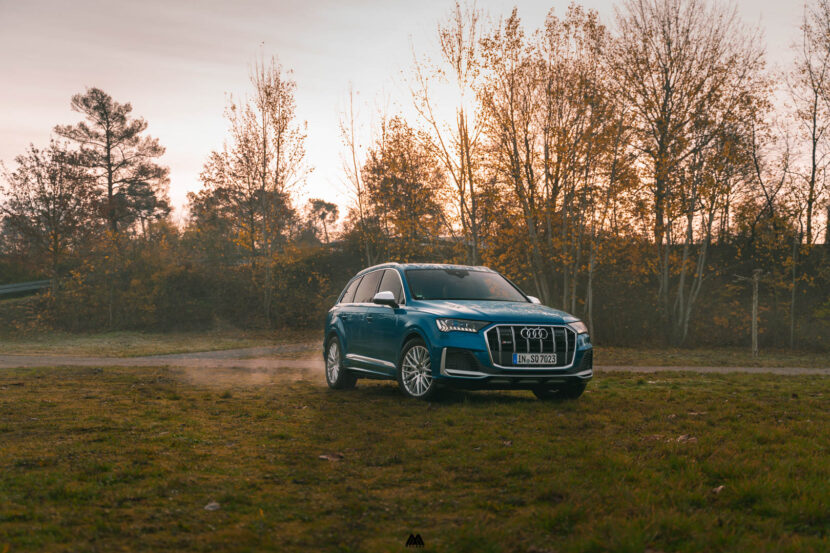 The overall ride and handling of the seven-seater offers a combination of simply breezing along on a lovely autobahn stretch to hunkering down on a meandering country road. It feels so stress-free and under-the-radar that it might well be the ultimate choice for those who oppose the flamboyant nature of the Lamborghini Urus or Audi RSQ8 which carry similar underpinnings. The SQ7 resembles that nephew in the family, who carries the same sporty genes but mixes it with more discretion and flair.

Leaving the technical ingredient behind with positiveness, we end up within the cabin where you are greeted with Audi’s familiar mix of soft-touch materials, leather seats, brushed aluminum trims, Alcantara on the doors and precision-action switches plus Audi’s latest infotainment system. Upon request, Audi will install sport seats with integrated head restraints and pneumatically adjustable side bolsters. You can even opt for ventilation and a massage function. A third seat row is available as well, but only applicable for children. There is not a lot of space to fit grownups. Also getting in or out of the third row is not the easiest in the world. For those interested, you can also choose the contour/ambient lighting package, which is also available as an option, illuminates contours and surfaces in 30 colors that can be adjusted to the driver’s individual taste via the MMI. 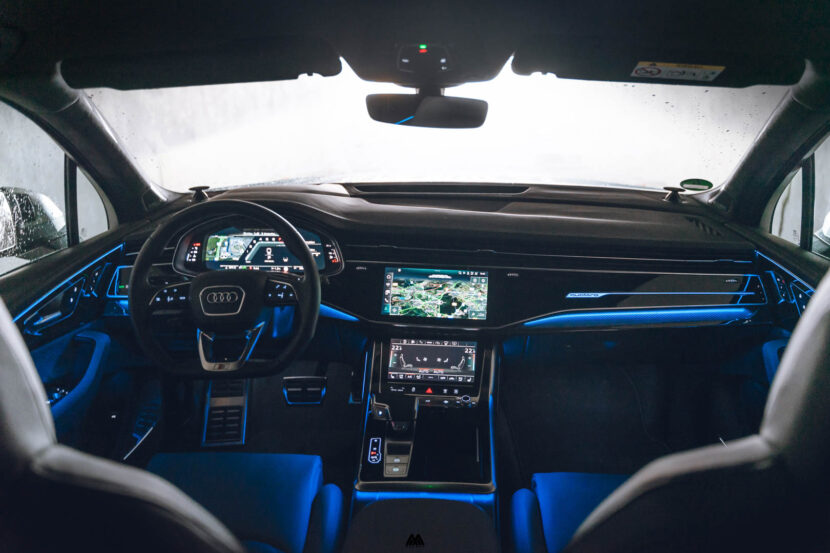 The MMI system itself is something we have seen before. The system integrates two large displays in the center of the instrument panel; one 10.1-inch and one 8.6-inch diameter display. Combined with the available voice control, head-up display, Apple CarPlay and Android Auto connectivity, Bang & Olufsen Advanced Sound System and an array of safety systems, you have everything you really need. For those loving luxury, you will enjoy the comfort equipment such as the four-zone automatic air conditioning, a power assistance function for closing the doors, and the air quality package with scent and an ioniser.

The SQ7 is every single bit of what I had hoped it to be. With the new V8 petrol-powered engine, we have the return of the naughty V8 growl combined with a package, which offers comfort and refinement in reserve and a daily-able nature that is suitable for anyone on the planet that doesn’t mind taking a watchful eye on its fuel consumption. Anyone in the market for a V8-powered SUV package should take notice of the SQ7, it is more surprising than you might have thought and exactly meant for those that know what they want without shouting it across rooftops.