BMW DTM teams place one and two in the Lausitzring race 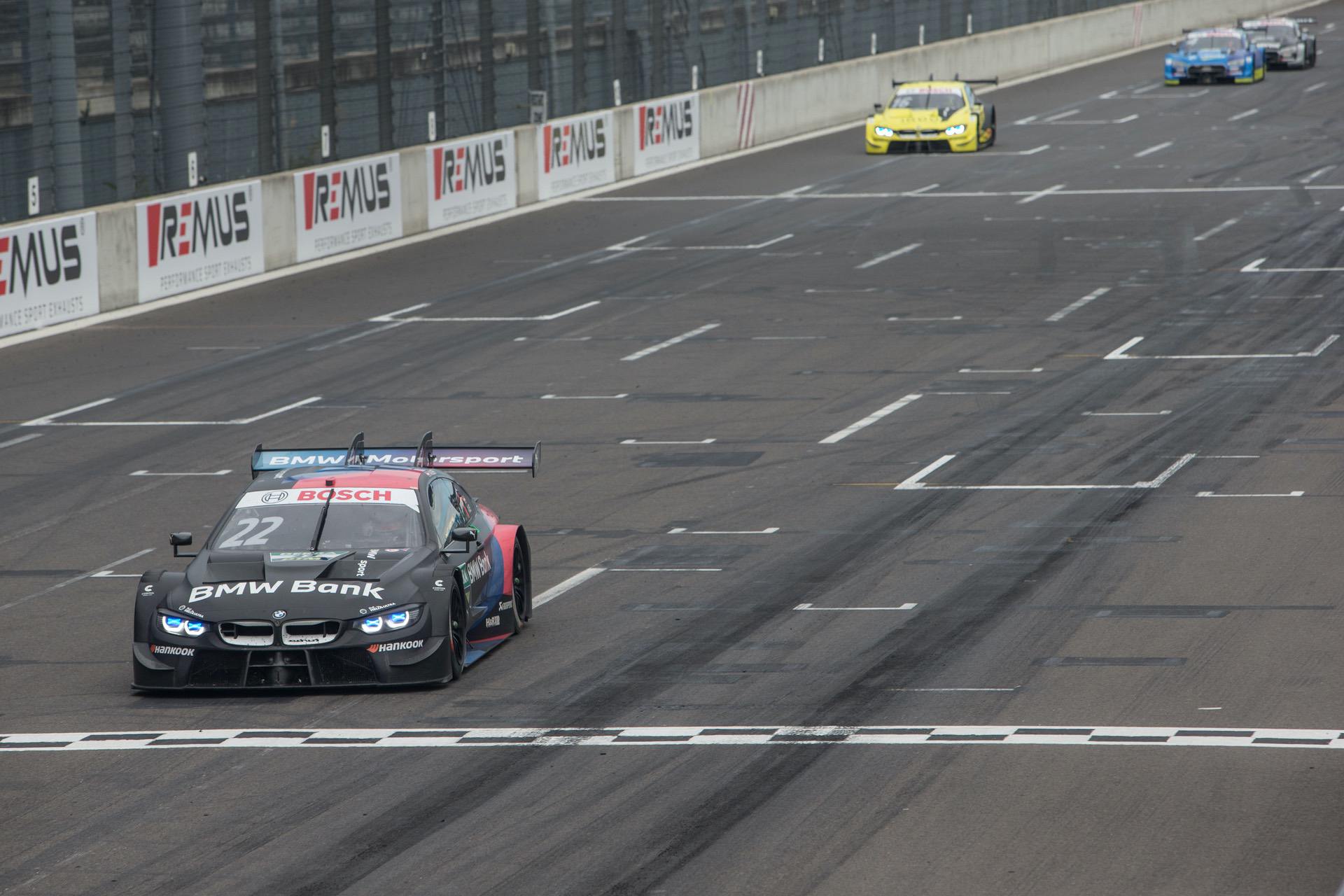 After a shaky start in the new DTM season, BMW Motorsport comes through in the Lausitzring race. Thanks to a great drive by Lucas Auer and Timo Glock, the BMW DTM teams placed 1 and 2 in today’s race. The win was Auer’s fifth in the DTM, and his first in a BMW car. It was the 88th victory for BMW in the DTM, and marked the 22nd time that BMW drivers have claimed first and second places. Jonathan Aberdein (RSA) crossed the finish line in seventh place in the CATL BMW M4 DTM. Marco Wittmann (GER, Schaeffler BMW M4 DTM) in ninth and Sheldon van der Linde (RSA, Shell BMW M4 DTM) in tenth position also finished in the points.

Having started the race from ninth and seventh on the grid, Auer and Glock were able to gain a few places at the start and kept pace with the leading group. Unlike their competitors, the pair decided to go for an early tyre change and made their mandatory pit stops on the tenth lap. The fresh tires then helped them to make up those decisive seconds on the cars ahead on subsequent laps. Once all drivers had made their pits tops, the duo had moved up to second and third positions and it did not take long for them to pass leader Jamie Green (GBR, Audi). Glock was on course for victory until one lap from the end, when Auer made a thrilling move to overtake him and secure his first win for BMW.

Timo Glock is the best-placed BMW representative in the drivers’ standings, moving up to fourth place with 52 points. The next DTM race weekend takes place from 4th to 6th September at Assen (NED).

Rudolf Dittrich (General Manager BMW Motorsport Vehicle Development):
“Thrilling right up to the final lap – that was a superlative DTM race. We are delighted with our first win of the season. Congratulations to Lucas Auer, Timo Glock and BMW Team RMG, who did everything right today. The one-two result was an important signal for us. Timo and Lucas were racing with a very good, consistent pace. However, our strategy was decisive as we found the right time to make the pit stops. Lucas stopped really early and made correspondingly good progress up through the field with Timo. Tyre management was the next factor to play a decisive part. Even though Sheldon van der Linde unfortunately lost the position he had secured in qualifying, a total of five BMWs finished in the points. That is very encouraging for the upcoming races. We are already looking forward to Assen and being able to welcome our fans back to the circuit there.”

Stefan Reinhold (BMW Team RMG Team Principal):
“The show was just right today. We finished off the day with a one-two result. Massive congratulations to the entire team. We had seen that our performance had been a bit lacking recently but we were able to do better in the race and if you refuse to give up, you’ll make it to the front at some point. I am delighted for BMW and for the whole team. I think that Lucas Auer and Timo Glock put on a great show for us right to the finish.”

Marco Wittmann (#11 Schaeffler BMW M4 DTM, BMW Team RMG, Grid: 6th, Race: 9th, Drivers’ standings: 6th, 40 points):
“I think that we went with the wrong strategy in the end. We stopped too late. All my fellow drivers ahead of me pitted earlier and came out earlier too. It is then just impossible to make up that ground. It is disappointing really, as we were actually doing well. Congratulations to Lucas and Timo!”

Timo Glock (#16 iQOO BMW M4 DTM, BMW Team RMG, Grid: 7th, Race: 2nd, Drivers’ standings: 4th, 52 points):
“Of course, it hurts when you have to surrender victory on the final lap. In the middle part of the race I tried to pull away a bit and increase the gap between me and Lucas. I suddenly got a bit of pick-up that made the car understeer. That allowed Lucas to close the gap and I realised that he still had one DRS opportunity left. He was able to mount an attack at the finish. I could have pushed back against it but overall, I wanted to think about the bigger picture. If I had started a battle with Lucas, the Audis behind us would have nipped past us on both sides with their fresh tyres. It was important for me to claim this one-two result for BMW.”

Lucas Auer (#22 BMW Bank M4 DTM, BMW Team RMR, Grid: 9th, Race: 1st, Drivers’ standings: 9th, 35 points):
“I am still lost for words. I think that was the most intense race I have ever experienced in the DTM, as an error could have been fatal. I was able to manage the tyres well, the strategy and pit stop were perfect. The car was also spot-on. And putting it all together on the final lap – it doesn’t get any better than that.”

Philipp Eng (#25 ZF BMW M4 DTM, BMW Team RBM, Grid: 12th, Race: 12th, Drivers’ standings: 11th, 20 points):
“Firstly, I am delighted for Lucas, Timo and the whole BMW team. Nothing went right for me. I have no idea what caused that. We will definitely have to take a close look at that.”

Jonathan Aberdein (#27 CATL BMW M4 DTM, BMW Team RMR, Grid: 16th, Race: 7th, Drivers’ standings: 12th, 11 points):
“Qualifying was disappointing but I am very pleased with our performance in the race. I think we did really well. Sometimes I had the feeling that I had the fastest car on the track. We have to do a bit better in qualifying and then we have a chance of winning.”

Sheldon van der Linde (#31 Shell BMW M4 DTM, BMW Team RBM, Grid: 4th, Race: 10th, Drivers’ standings: 10th, 29 points):
“I really lost a lot of time at the start. That was very disappointing and I don’t know exactly what happened. We will have to take a look at that. It really is very annoying, after starting from fourth place. The car went really well today. Lucas won and Timo finished second. Congratulations to both of them. That showed what is possible with our cars.”