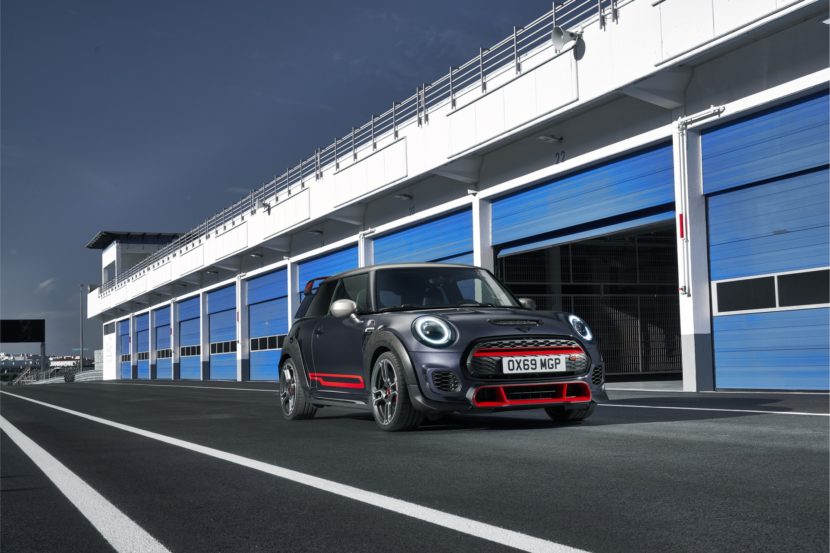 The new MINI John Cooper Works GP is unveiled just a day before its world debut in Los Angeles. Featuring a 225 kW/306 hp 4-cylinder turbocharged engine and a maximum torque of 450 Nm at a speed of 1 750 rpm, the MINI racing car accelerates from zero to 100 km/h in just 5.2 seconds. MINI says that it will produce the new MINI John Cooper Works GP in a limited edition of 3,000 units. Delivery to racing enthusiasts around the globe will get underway in March 2020. 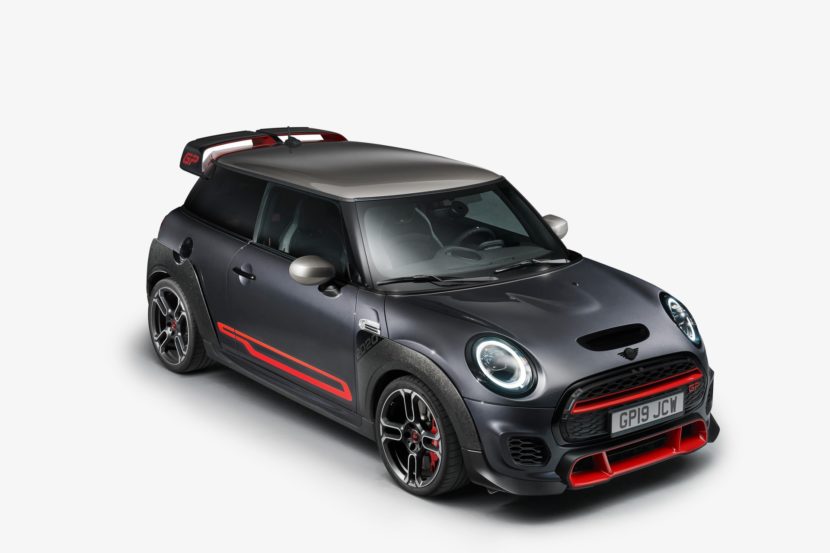 To achieve that performance, several upgrades were done to the four-cylinder turbo. Firstly, it comes with a newly developed turbocharger. It is integrated into the exhaust manifold and fitted with a divert-air valve that helps optimize its response. The compression ratio of the engine in the MINI John Cooper Works has been reduced from 10.2 to 9.5 in line with the increased boost pressure as provided by the system. The intake air duct has also been newly developed. Enlarged inlet and flow cross-sections and the increased volume of the noise damper ensure maximum dethrottling. 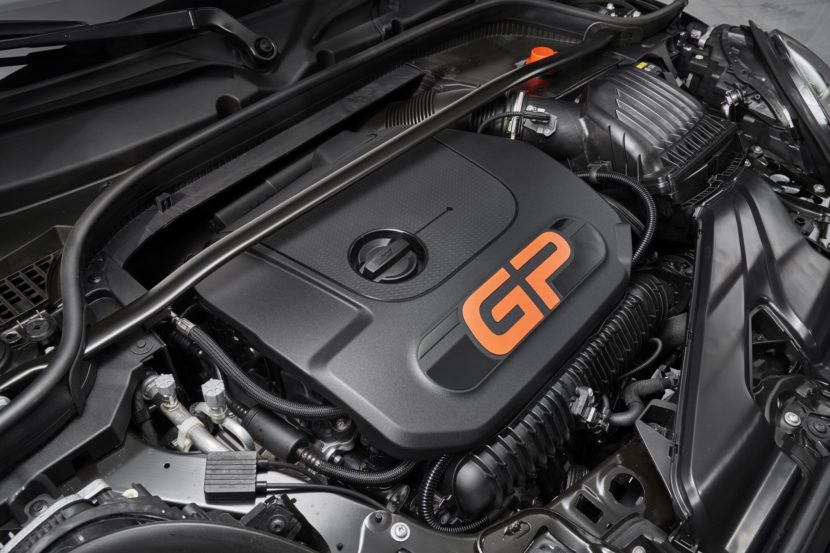 Secondly, the engine’s new multi-hole injectors, arranged centrally between the valves, are able to cope with an increased flow rate, transporting the fuel into the combustion chambers at an injection pressure of up to 350 bar.

Lastly, the new MINI John Cooper Works GP features a model-specific engine oil sump with increased volume and a distinctive geometry. This ensures a reliable oil supply at all times, even during extremely sporty driving involving high levels of longitudinal and lateral acceleration. The top speed is 265 km/h. 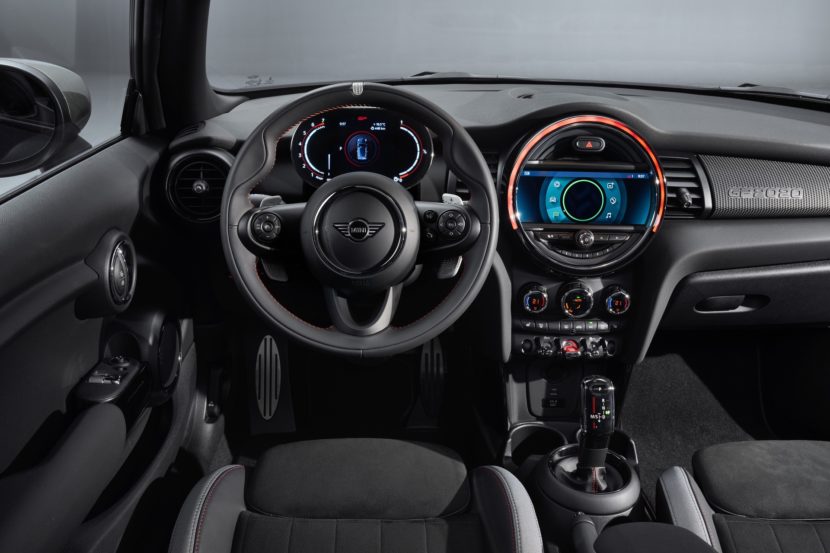 The new MINI John Cooper Works GP is fitted as standard with a model-specific 8-speed Steptronic transmission – complete with integrated differential lock and matched to the engine’s performance characteristics and high torque.

To deliver a sound worthy of a racing car, the straight pipe ducting of the exhaust system leads into a particularly large rear silencer with a specific interior design.From there, two tailpipes with matte brushed stainless steel trim and a diameter of 90 millimeters each branch off centrally into the rear apron. 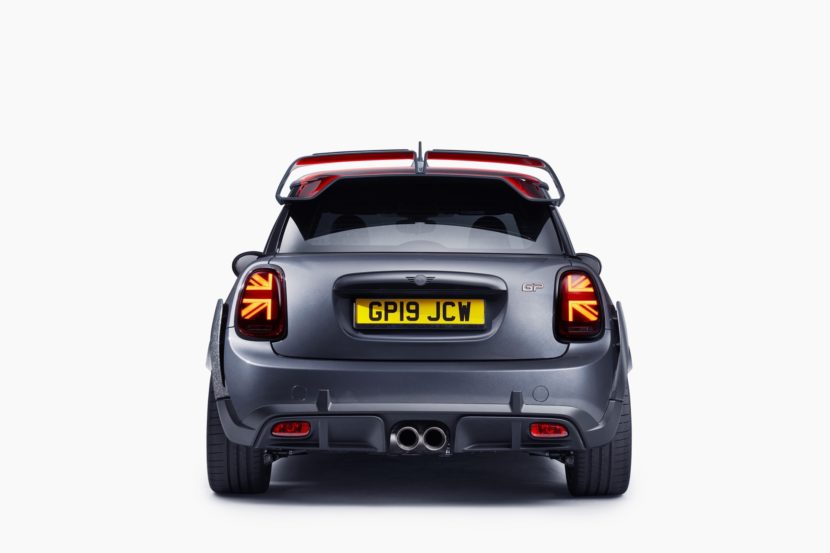 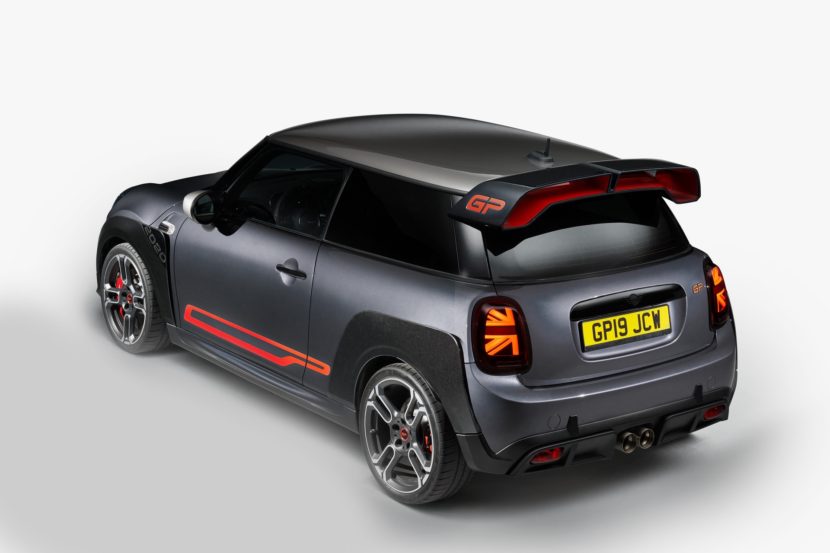 The engineers in Oxford and Munich designed an engine mount specially developed for the new MINI John Cooper Works GP. In the underbody area, the tunnel bridge has been replaced by a solid support for the likewise modified rear axle member. The generously dimensioned, rectangular strut frame provides ideal conditions for a suspension set-up geared towards the very highest levels of lateral acceleration. At the front end, the suspension connection is optimized by a strut brace.

With model-specific kinematics and elastokinematics, the suspension technology of the new MINI John Cooper Works GP has been put through real life testing on the Nurburgring. The four wishbones on the rear axle are fitted on the outside with clearance-free metal ball sleeve joints instead of rubber mounts, while on the inside there are highly rigid rubber mounts. The strut in the engine compartment is bolted directly to the support bearings of the front axle.

Furthermore, the model-specific versions of the single- joint spring strut for the front wheels and the multilink rear axle were also optimized with regard to component stiffness. 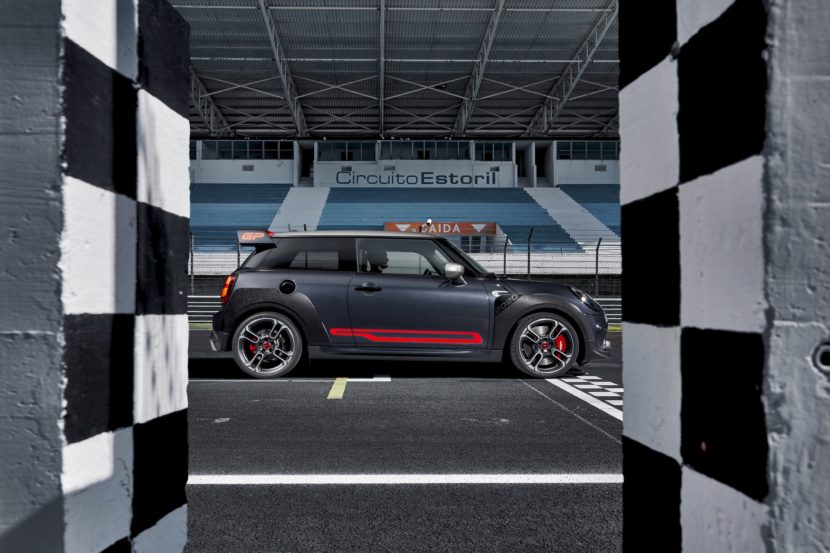 In order to increase agility, the track widths were increased and the body lowered by 10 millimeters as compared to the MINI John Cooper Works. Specially tuned suspension springs are just as much a part of the model-specific suspension as the specially adapted auxiliary springs, dampers and stabilizers.

Newly designed swivel bearings enable increased camber levels on the front wheels. Together with the likewise increased camber levels of the rear wheels, this increases the potential for transmitting lateral forces during dynamic cornering. Stabilizer bearings on the front and rear axles with particularly high preload optimise roll support during spontaneous steering movements. 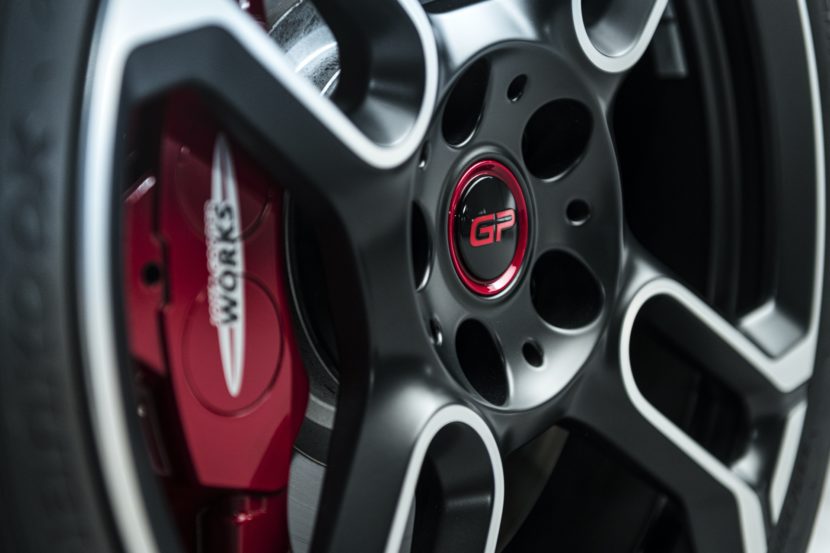 To stop all that power, a new braking system has been designed. It comprises 4-piston fixed-caliper disc brakes on the front wheels and single- piston floating-caliper brakes on the rear wheels. The front calipers are made of aluminum and combined with 360 × 30 mm ventilated discs. They are finished in Chili Red and bear the John Cooper Works logo.

The new MINI John Cooper Works GP is fitted as standard with 18-inch lightweight forged wheels. The light alloy wheels in 8.0 J × 18 format weigh less than nine kilograms and are fitted with high-performance 225/35 R 18 tires specially developed for the GP. 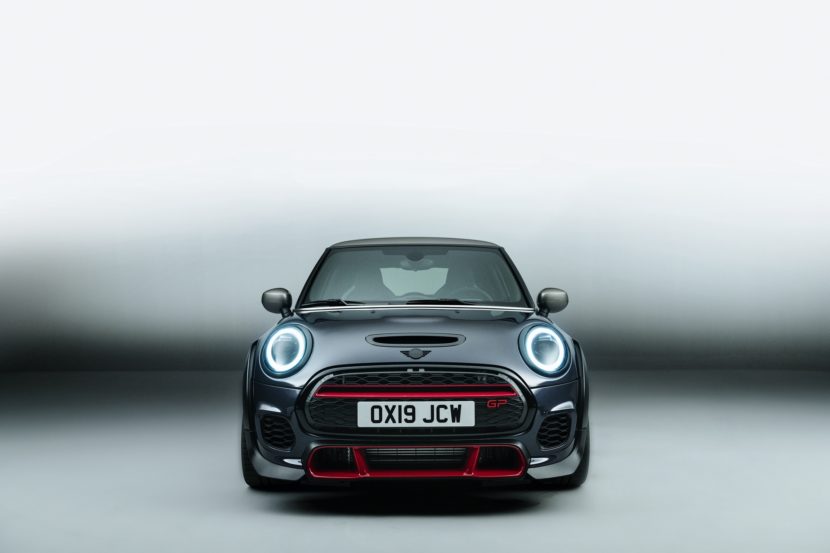 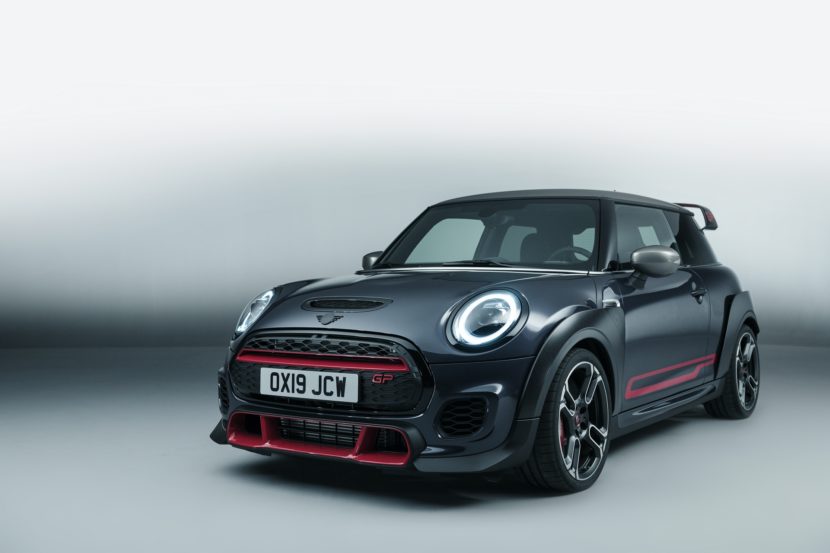 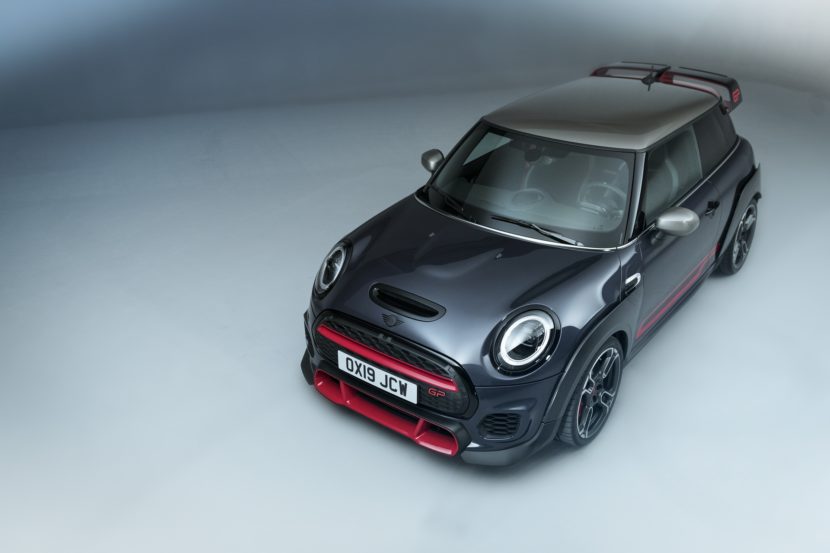 As you’d expect for a racing car, the MINI John Cooper Works GP comes with a large roof spoiler with double wing contours, model-specific design of the front apron surround known as the Blackband and a front spoiler lip. In addition, the front apron has particularly large air intakes.

The JCW GP includes large and strikingly flared wheel arches consisting of a thermoplastic substructure and an outer shell made of carbon fibre-reinforced plastic (CFRP). The new MINI John Cooper Works GP is the BMW Group’s first production vehicle to feature an exposed matte CFRP coating. The individual numbering with the numbers “0001” to “3000” is applied to the surfaces of the front wheel arch panels by means of a newly developed paint transfer process. 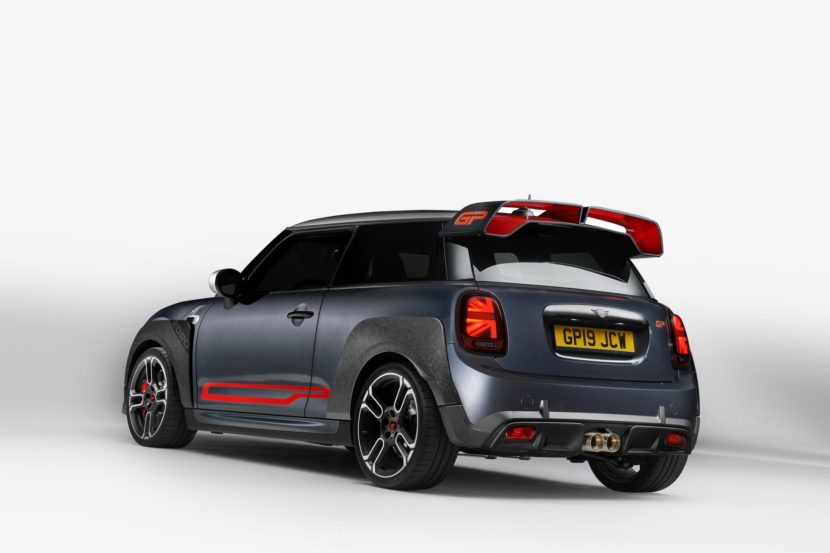 Only the exclusive finish Racing Grey metallic is available for the car. Meanwhile the roof and exterior mirror caps are finished in the contrasting color of Melting Silver metallic. A cross- member on the hexagonal radiator grille, the inserts in the lower air intake and the inside of the roof spoiler are finished in high-gloss Chili Red.

Meanwhile the GP logos on the front and rear, the outer sides of the roof spoiler and the door sill finishers, as well as the foils above the side skirts, are finished with a stylized “GP” in Rosso Red metallic matte. 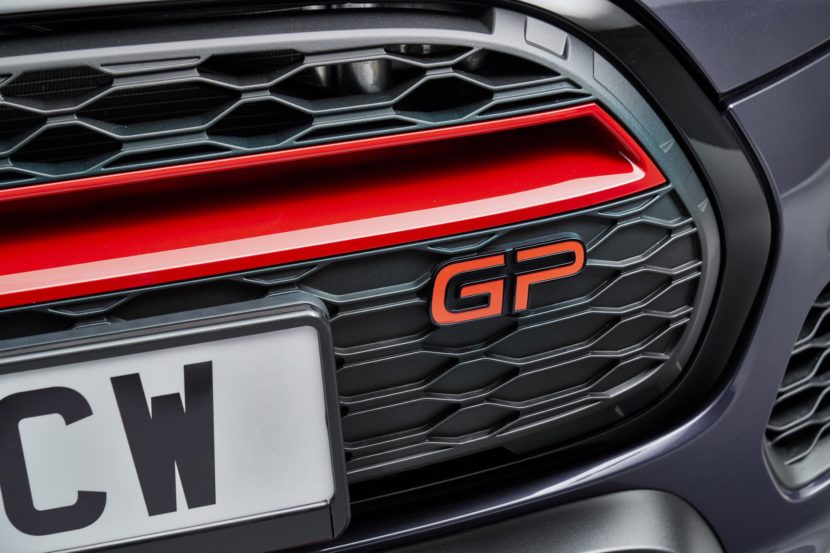 Inside, the standard equipment includes John Cooper Works sports seats in Dinamica/leather combination with silver side edges, red accentuation seams, a GP badge underneath the integrated headrests and red belt straps. The interior trim on the passenger side bears the numbering of the respective vehicle. This is produced individually by 3D printing.

In addition to red accentuation seams, the steering wheel rim made of soft nappa leather also features a metal centre marking for the 12 o’clock position created using the additive manufacturing process. The shift paddles on the steering wheel are likewise 3D-printed in metal. 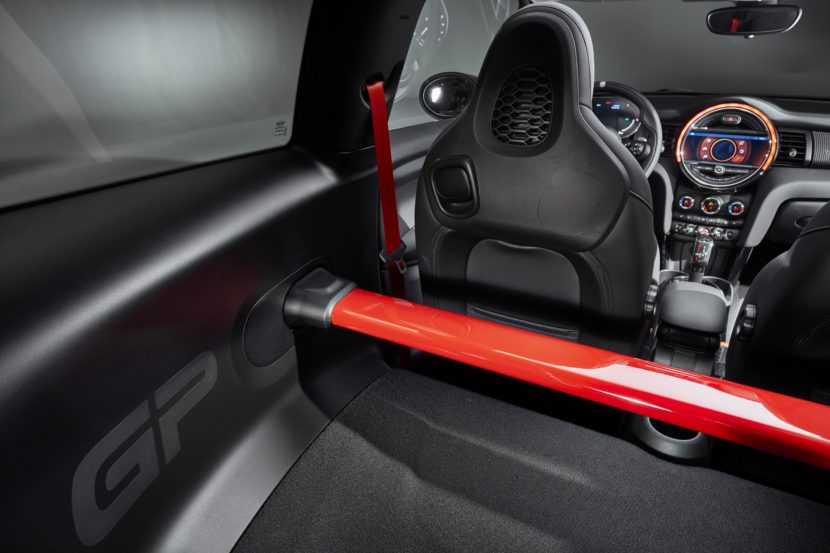 Optional features for the new MINI John Cooper Works GP include automatic climate control, the Connected Navigation Plus package, which also includes telephony with wireless charging, and an alarm system. The Connected Media system comes as standard: it displays model-specific information on the 6.5-inch screen in the central instrument panel. The standard trim also includes a digital instrument cluster on the steering column.

Pricing has yet to be announced, but in the mean time, stay tuned for more info from the 2019 LA Auto Show.