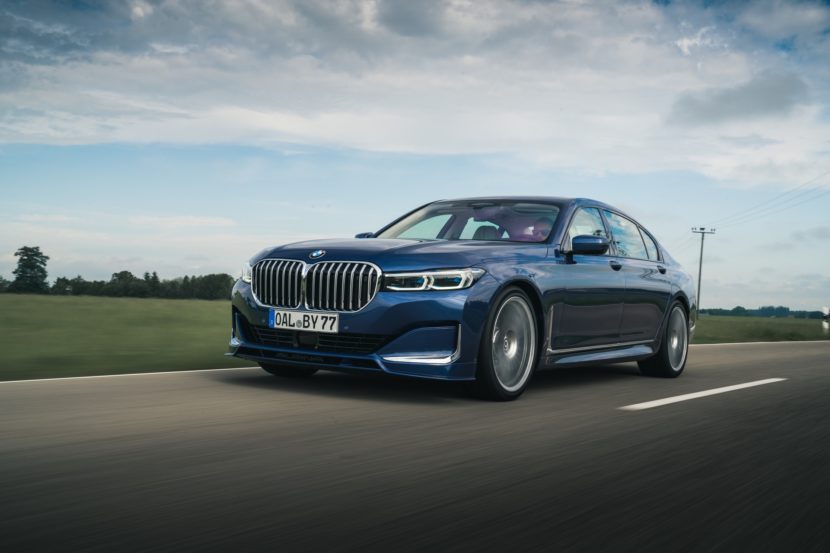 How often do you get to drive the fastest sedan in the world? Not too often would be the correct answer, so it comes as no surprise that when BMW of North America and ALPINA extended an invite to visit Buchloe and drive the new B7, I immediately jumped on the opportunity. The little German village is the home of ALPINA and it’s a short distance from Munich, yet, despite my countless trips to Germany, I haven’t managed to visit their headquarters and factory.

But ALPINA is not your typical automaker, nor typical is the factory. Imagine their home as a neat and luxurious place where everyone knows each other, and where you see more SINGER sewing machines than in a clothing factory. It’s a place where some of the most exquisite BMW models are being refined for some of the most pretentious customers in the world. 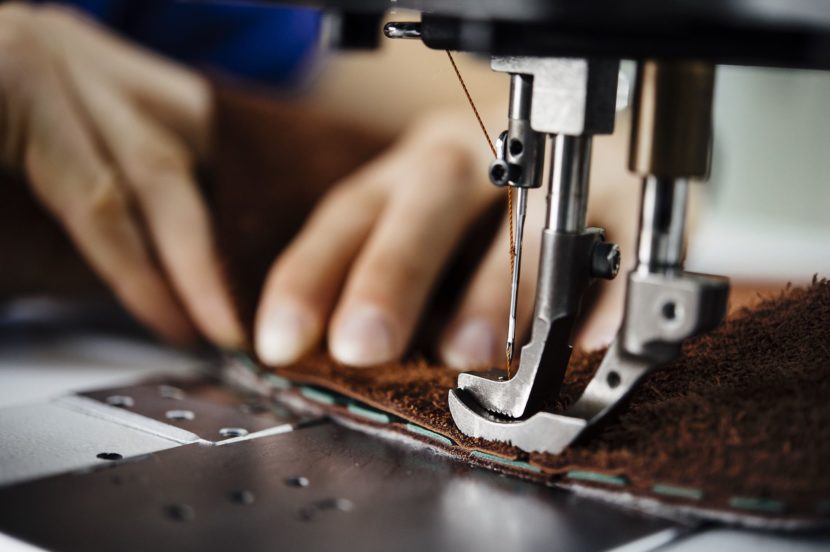 The owner of an ALPINA B7 is slightly different than the 7 Series one. According to the ALPINA CEO, Andreas Bovensiepen, it’s not unusual for the B7 owners to have a chauffeur and ride mostly in the back seat. But, if you’re into driving and enjoying some of the fastest cars in the world, ALPINA has you covered as well because the new B7 is the fastest sedan on the market with a top speed of 205 mph or roughly 330 km/h. At that top speed, you will see most of the cars in your rearview mirror. 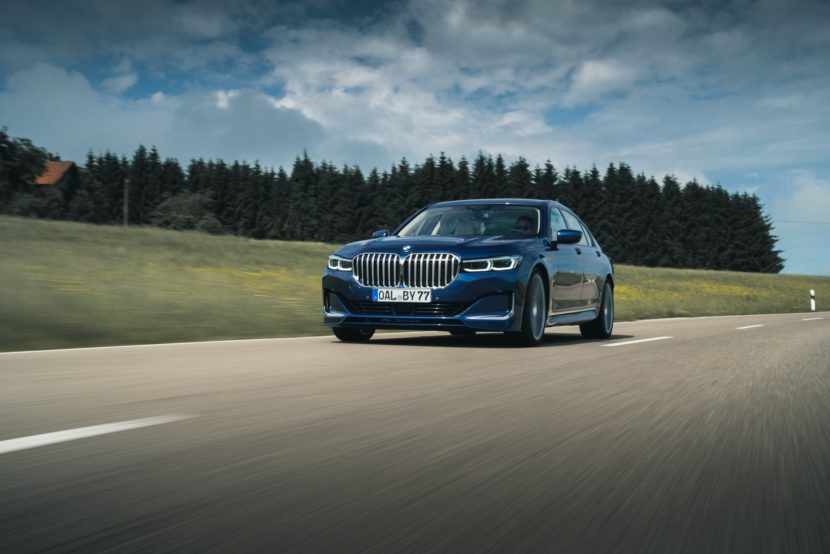 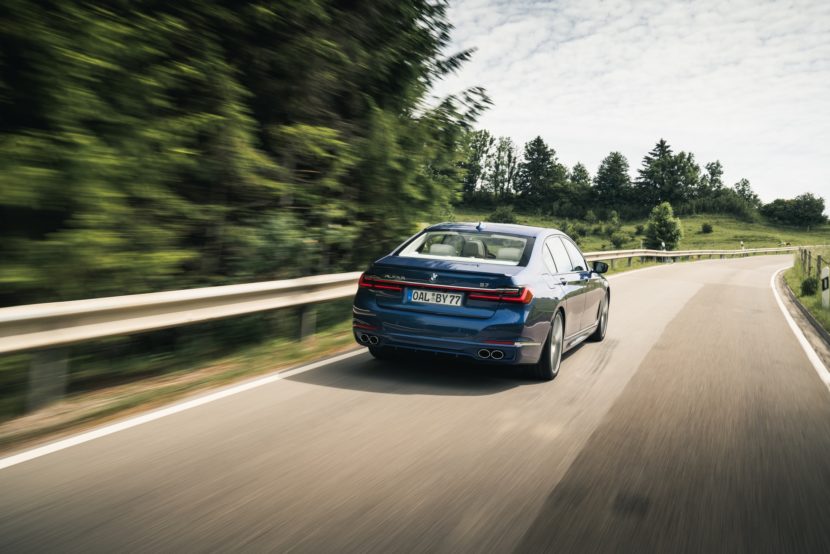 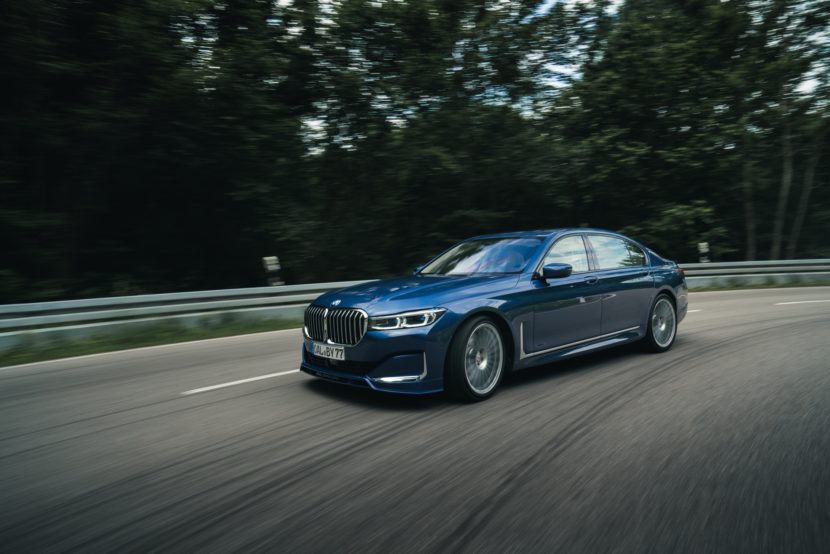 For the facelift BMW 7 Series, ALPINA has thoroughly revised the B7. Especially in the engine compartment, the engineers spent considerable effort to enhance the already amazing 4.4 liter V8 biturbo. The new B7 features larger diameter propellers in its turbos, for better torque down low, tweaked engine management and newer intercoolers. 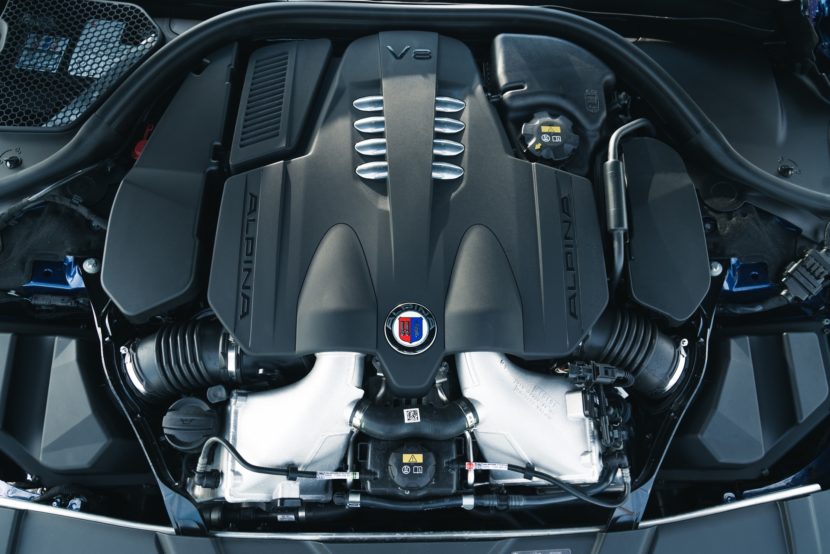 The B7 features a twin-axle air-suspension system, active integral steering and an active anti-roll mitigation system, all of which are seen on the standard car in various guises, too. There is a new ALPINA Sport+ mode as well, combining a bespoke calibration and a 15mm drop in overall suspension ride height. All these upgrades are meant to improve upon the previous excellent driving dynamics and make you forget that you’re rolling in a 4,800 lbs car. 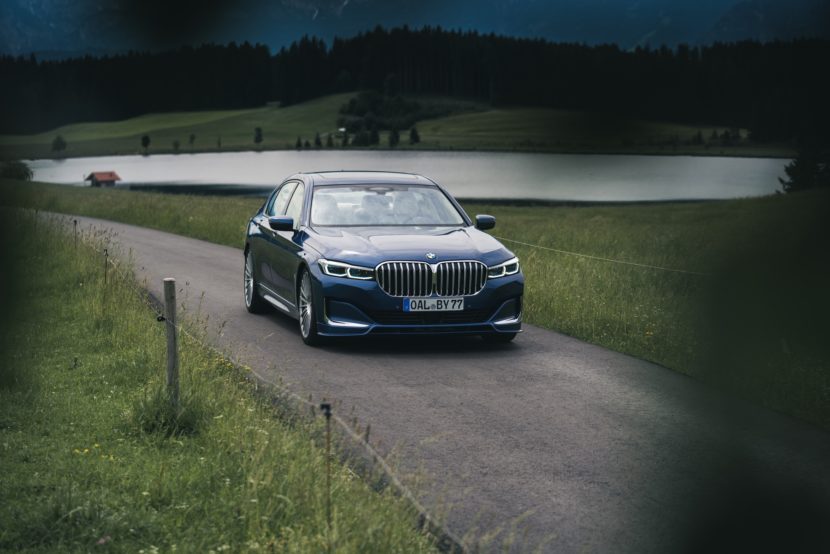 My test drive kicks off with a short run on the German Autobahn, the Candyland for any American visiting Europe. An unlimited speed stretch of road will soon allow me to test the B7’s top speed, but not before I kick the car into Sport Plus to fully enjoy its sportiness and engine sound. A few minutes later and after sampling its large brakes, I find myself building up speed and courage as I approach a long straight. The refined ZF 8-speed transmission is as superb as ever, the shifting is extremely smooth and precise, and I’m throughly enjoying the ALPINA-designed shifting buttons behind the steering wheel. 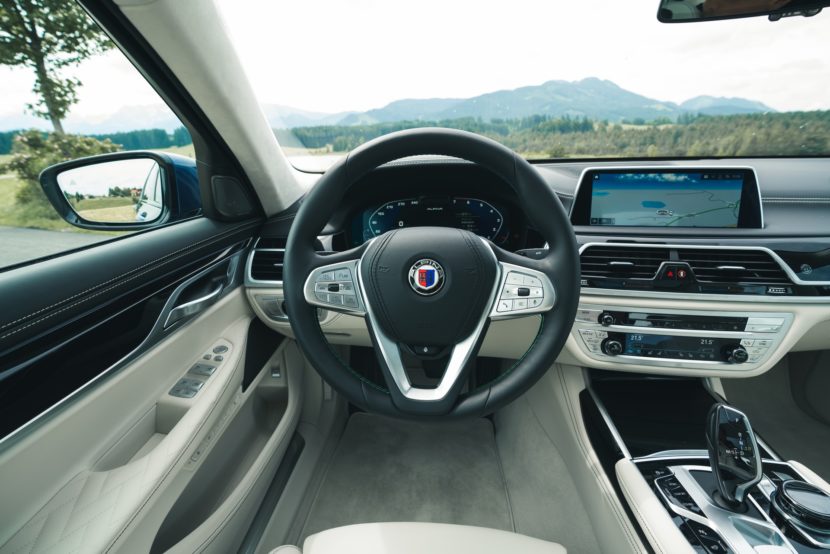 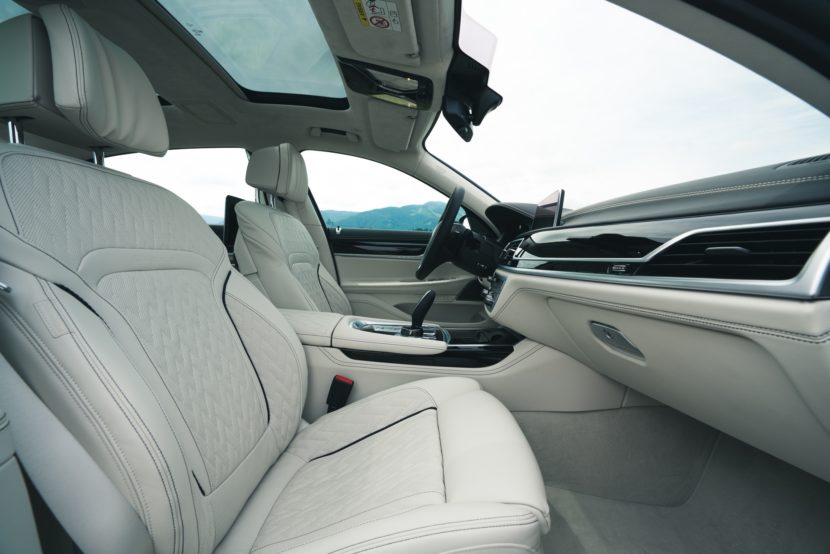 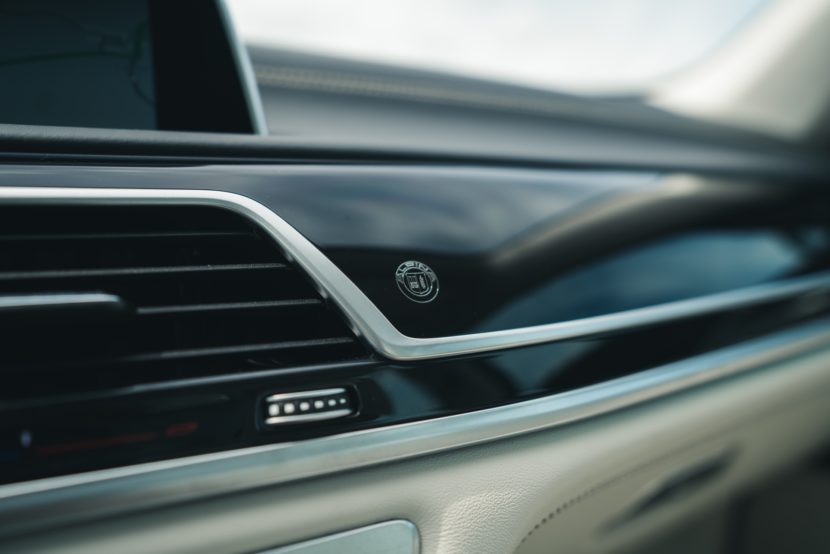 100 km/h comes in no time, 150 just a couple seconds after and I am now in the 200 km/h territory while the new B7 xDrive is stuck to the road with plenty of grip and power to further push it. I floor the gas pedal like there is no tomorrow and I see the speedometer quickly approaching the 300 km/h needle. My co-driver seems to be confident in my driving abilities so he encourages me to push it more.

305 km/h and the B7 simply flies past other cars on the Autobahn, while staying planted on the road and extremely stable. The two-axle air suspension system with auto-levelling function enables the ride height to be adjusted by a total of 1.4”. At speeds above 225 km/h (140 mph) or when in Sport+ Mode, the B7 automatically reduces its ride height by 0.6” for a lower center-of-gravity. 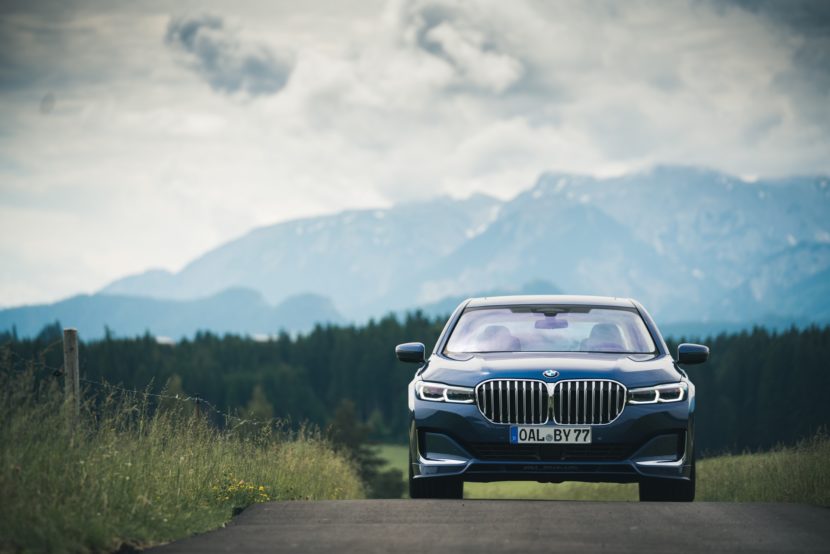 The cabin is well isolated from the outdoor noise which allows me to have a normal conversation with my co-driver.

Next, unfortunately, a car cuts in front of me which ruins the fun and makes me slam those brakes as powerful as I can. The B7 stops sooner than I would have thought – considering the speed and size of the car – but now, the long stretch of road comes to an end and I need to jump off the Autobahn and onto some backroads. Needless to say, it was still about 250 km/h faster than my usual drives in the US.

The engine now gets a short break before getting back on the gas pedal to see what it can do on some of those fun German twisties. Just for the sake of it, I switch over to Comfort Plus where the B7 is more docile, yet sporty enough by many car standards. The steering does feel a bit more muted and slightly dead on center, though. 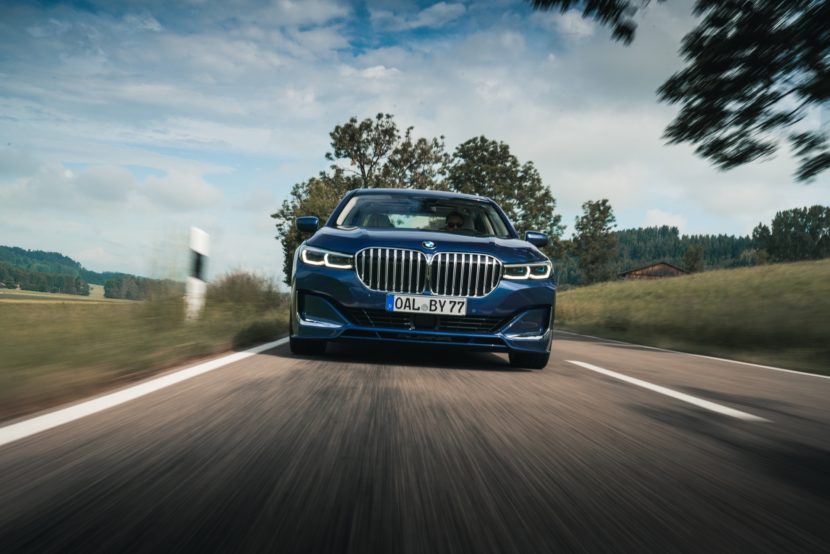 My hands are hugging the buttery smooth ALPINA-refined steering wheel, my thumbs are back on the buttons behind the wheel, and ready to push this monster.

Downshifting brings the revs way up and fills the cabin with a pleasing exhaust note, Sport Plus is back on and the suspension tightens for what’s about to come. Thanks to the BMW xDrive system and the MICHELIN® performance tires (255/40 ZR20 at the front and 295/35 ZR20 at the rear), the new 2020 B7 stays planted through the corners while allowing some wheel slip in the rear – enough to put a smile on our faces. Despite its heft, the facelift B7 carries itself well through the tight corners, with minimal body roll and certainly a tighter suspension that in the “regular” 7 Series. If I were to nitpick about the B7, I would say that you will feel the body roll in the B7 limousine, showing us that the laws of physics are still unbeatable, despite all the engineering tricks. 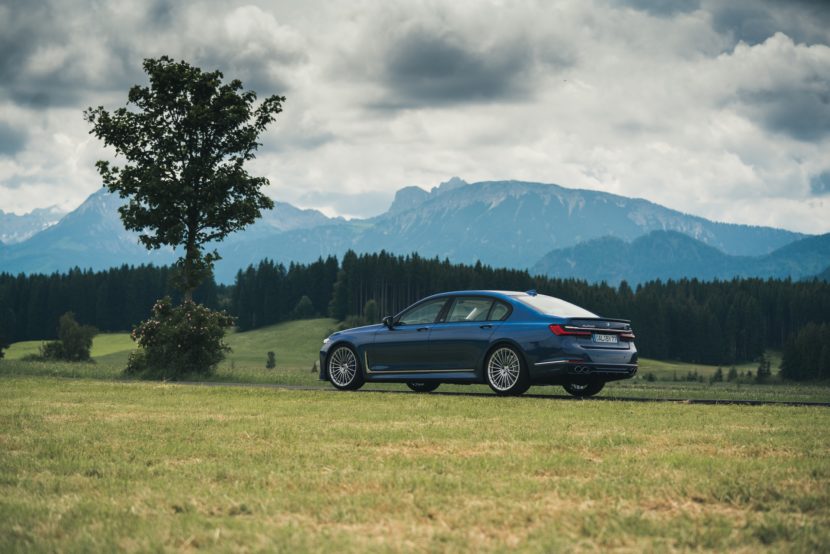 Compared to the 2020 750i Facelift I recently drove, the ALPINA B7 comes with a more precise and less muted steering, which is something all ALPINA owners expect from their cars.

The new, revised brakes also come in handy, thanks to the 4-piston fixed calipers paired with 15.55 x 1.42 inch discs. On the rear axle, floating calipers are now paired with larger 15.67 x 1.10 inch discs. Accelerating and braking hard is now the norm, while passing many German drivers that probably think we’ve lost our mind. The 600 horsepower and the torque in the low RPM help the B7 feel lighter than it is, pulling out of corners with ease and confidence. And most importantly, it doesn’t give a boat-like feeling. When in Sport Plus.

The xDrive system kicked in a few times which helps remind you that additional grip might be needed for a limousine of this size. The tuned all-wheel-drive system sends up to 85 percent of power to the rear wheels, while a reinforced rear axle improves stiffness. 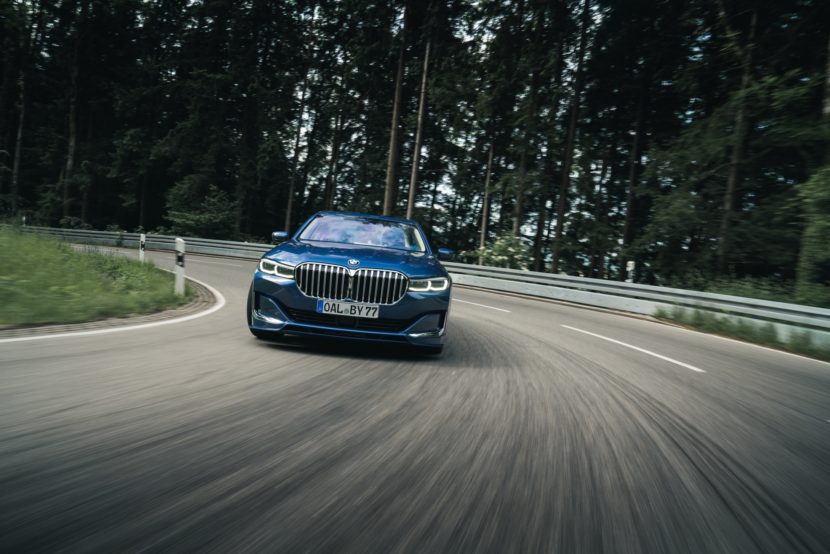 During a more calmer ride and navigating through some tiny village roads, the four-wheel steering suspension and the integral active steering highlight the agility of the new B7.

Overall, if I were to compare the driving experience of the 7 Series and the B7, then a few things would play in the ALPINA’s favor – starting with the sportier steering and the stiffer chassis, and ending with a tighter suspension setup.

Yet most ALPINA owners won’t pick the B7 for its extreme driving capabilities, but rather for its exclusivity and craftsmanship. From the moment you step inside, you’re surrounded by higher premium materials and attention to details that sometimes falls into the Rolls-Royce territory. During a casual conversation with the ALPINA plant manager, I learned that the Lavalina leather inside the B7 is often seen in some Rolls-Royce interiors. 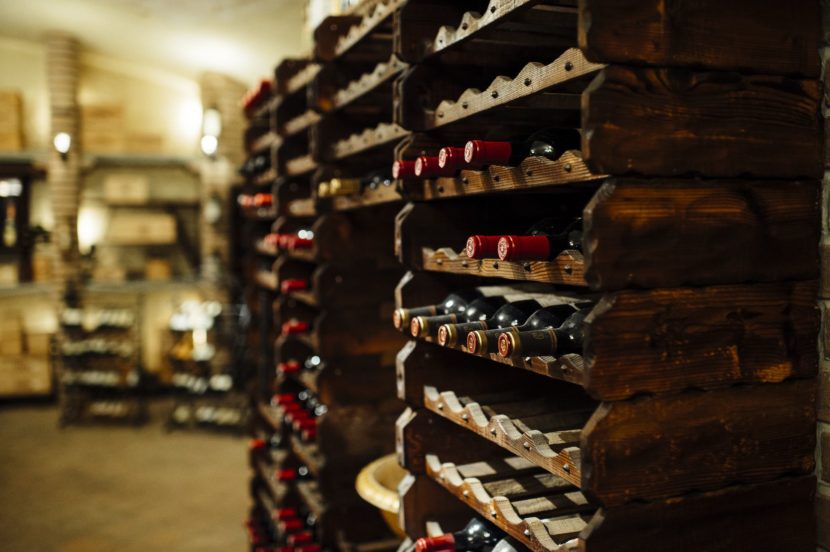 Out of the nearly 1,800 ALPINAs produced annually, a few hundred units carry the B7 badge, and most of them find a home in the United States. And while the company plans to stay true to its roots and delivery small, yet carefully planned and engineered cars, its wine business is one of Europe’s largest distributor of fine wines, now accounting for as much as a third of the company’s gross revenues.

Fine wines, fine automobiles and German engineering – those should be enough reasons to own an ALPINA in your life.