DTM: Marco Wittmann wins at Misano from last place on the grid

Home » DTM: Marco Wittmann wins at Misano from last place on the grid 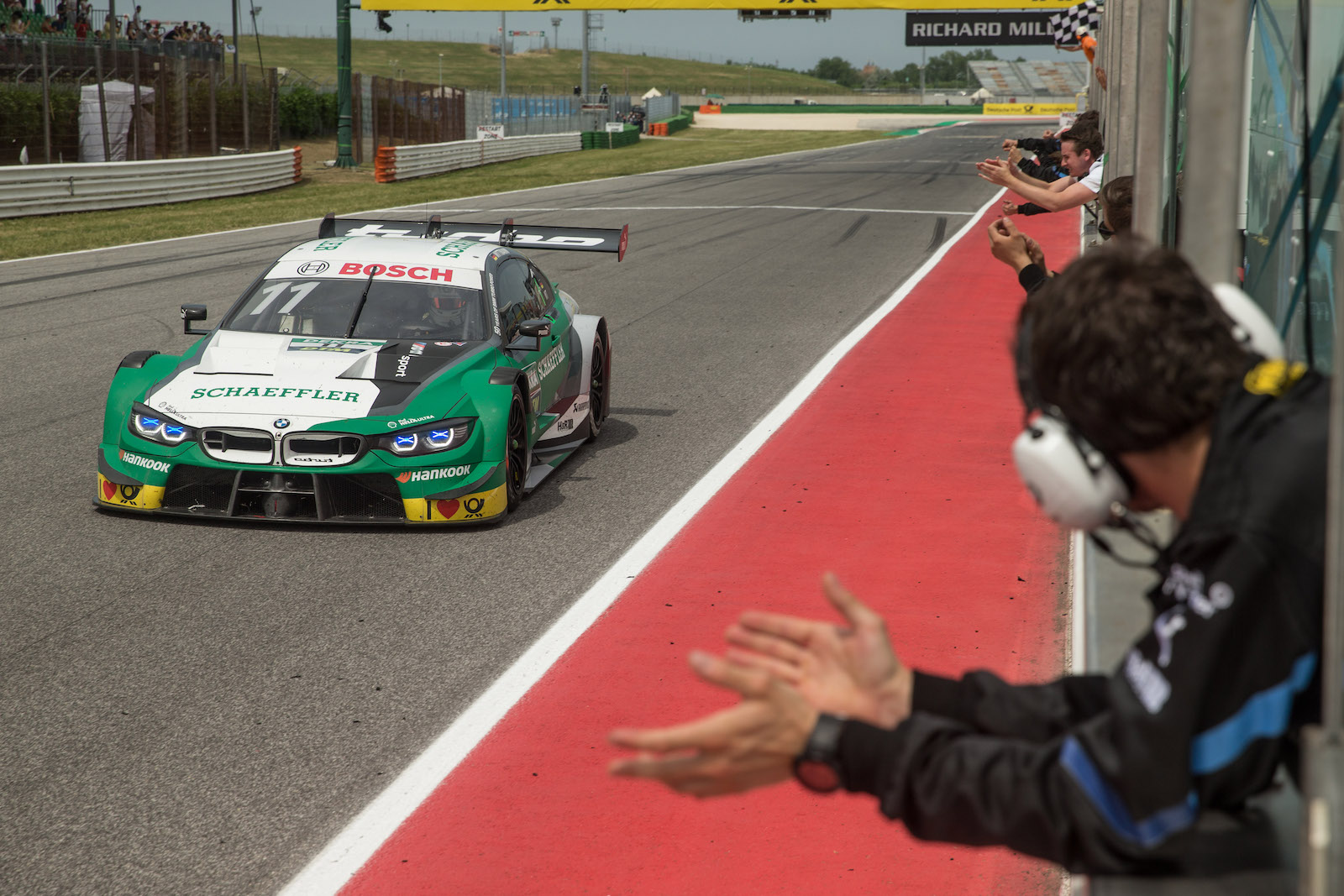 2014 and 2016 DTM champion Marco Wittmann pulls a stunning victor at Misano aboard the BMW M4 DTM after racing from last place on the ride. The win was born from a strategic move at the beginning of the race – Wittmann came in for his tire change at the end of the opening lap. This proved to be a clever tactical move, which really paid dividends after a safety car period.

Once the other drivers had all been in for their mandatory tyre change, Wittmann found himself leading the race on lap 17. He controlled the race from that point to take victory. Wittmann’s success was also the 35thDTM win for BMW since the brand returned to the series in 2012, and the 25thvictory for the BMW M4 DTM. 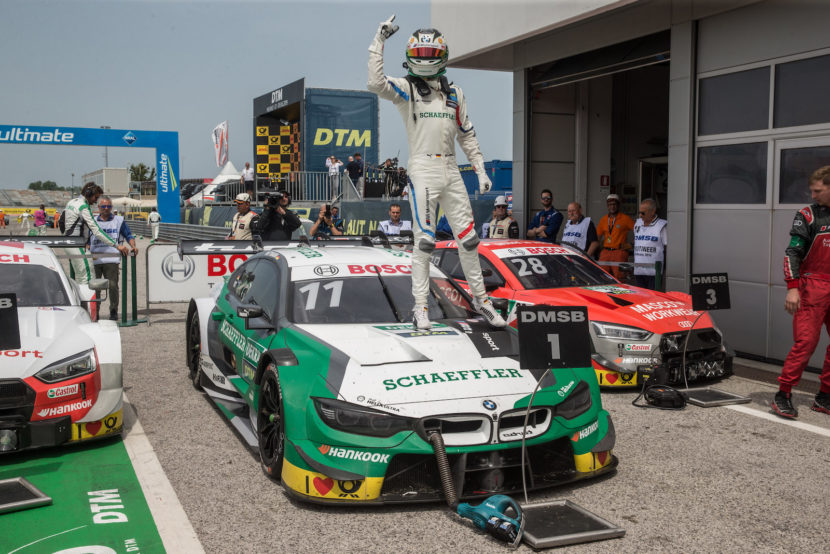 Reactions to the fifth DTM race of the 2019 season at Misano.

“We saw another entertaining and nerve-racking DTM race today, with plenty of battles right through to the finish. Unfortunately, we were not right up there at the front in qualifying this time. As such, we knew we would be in for a tough race. That makes me all the happier with the fantastic victory for Marco Wittmann and BMW Team RMG. Marco had to start the race from 18thafter technical issues in qualifying. We took a big strategic risk with his early stop, however, Marco paced the tyres superbly. He really looked after his tyres well today. It was another extraordinary performance from Mega Marco and his team. I’d also like to congratulate Bruno Spengler on his impressive fourth place. He actually deserved to finish on the podium. Philipp Eng, who came into the race as the championship leader, unfortunately got caught up in a bunch at the re-start and consequently lost a lot of positions. Like Timo Glock, he found himself stuck in the middle of the pack. Sheldon van der Linde showed his pace again as the best-placed BMW driver after qualifying, and was involved in a lot of battles for position. He gained a lot of experience again in this race. Unfortunately, Joel Eriksson’s race was over too soon as a result of a technical issue. That is a shame, as he would have been looking at finishing in the points. We were delighted by the guest appearance by Andrea Dovizioso. We are looking forward to seeing him on four wheels again tomorrow.”

“It is a fantastic feeling. We did not have luck on our side at the last race weekend, but managed to regroup successfully. Marco Wittmann’s drive today was worthy of a champion, and the guys in the garage worked hard to get the car up and running again in time for the start. That did not look likely this morning. Bruno Spengler also achieved a superb result. The performance is definitely there for Bruno, and we know there is more to come. We are very happy to have him in our team, and that he feels at home here. Timo Glock also picked up a point – they all count.”

“I am really happy. What a fantastic race. Particularly after the misfortune in both races in Zolder – Lady Luck was on our side again today. I was obviously very disappointed not to have set a lap time in qualifying. We had to take a huge risk, as I started the race from last place. We stopped early, without knowing for certain whether we could complete the full race on just one set of tyres. The final five or six laps were obviously critical, but it worked out in the end and we won the race. That is fantastic, particularly for my team, who had to pull out all the stops to get the car ready for the race after qualifying. I’d like to thank my team: That was simply superb!”

“Congratulations to the team and Marco Wittmann. It was a perfect strategy and he drove very well. Unfortunately, we were a little unlucky. We had the speed to finish on the podium. The last few races have been slightly different. You have had to take your chance with the safety car and have a little luck on your side. We were lacking that a little. However, the car was good and I had a superb start and a good pit stop. I’d like to thank my team for that. I’m looking forward to tomorrow.”

“It was a difficult and, above all, a crazy race, with Marco Wittmann taking the win. It showed again that, if you start from the back of the grid, you should stop on the opening lap to give yourself a chance of winning the race. As far as my race is concerned, I was out there driving, but the balance of the car was not as I would have liked it to be. Unfortunately, I cannot really tell you why that was yet.”

“That was the fifth safety car in the fifth race. This time, Marco Wittmann benefitted from it. At the same time, he drove an impressive race. As such, I would first like to congratulate him, BMW Team RMG and BMW. We ended the race with two cars in the points, with Philipp Eng in seventh and Sheldon van der Linde in ninth. Having started from fifth and seventh, we were obviously hoping for a little more than that. For that reason, we must continue to work hard and cope as well as possible with the hot conditions. In the case of Joel Eriksson, we unfortunately had a technical issue. We will have to take a look at it and determine what we can do for tomorrow to take another step forward and come back stronger.”

“Seventh place is obviously not a dream result. However, if you want to challenge for the championship in the DTM, it is very important to pick up points on days like today. I did not put together a really quick lap in qualifying, and failed once or twice to manoeuvre my way into a good position at the re-start. However, the team helped me back up the field with a good strategy. On the whole, I am happy to finish in the points. Congratulations to Marco Wittmann on a fantastic fightback and victory.”

“It all started really well, qualifying as the best BMW driver. I tried to challenge for the lead at the start of the race. Maybe I damaged my tyres in the process. I am disappointed with the result, as it could definitely have been better. However, I am learning all the time. I will now turn all my attention to tomorrow.”

“We got off to a good start and the first couple of laps went pretty well. However, we then suffered technical issues quite quickly and were forced to retire from the race. Nonetheless, we will now focus on tomorrow and do our very best. We definitely have the speed.”

3 responses to “DTM: Marco Wittmann wins at Misano from last place on the grid”