The BMW G05 X5 has been on sale for quite some time now and it was finally put through the usual tests by the people over at the Insurance Institute for Highway Safety or, as it is otherwise better known: IIHS. The US-based institution takes pride in its tough testing procedure and yet, the X5, managed to get Good ratings in all the tested criteria earning itself the 2019 Top Safety Pick+ accolades.

The IIHS testing system gives cars four potential ratings: Poor, Marginal, Acceptable and Good. They put the cars in various crash testing simulations, including the feared small overlap front one where initially a lot of cars failed. That was back when this new system was introduced and car makers had time to adapt their cars to the new requirements, the BMW X5 included. The new SUV scored ‘Good’ in all testing situations. 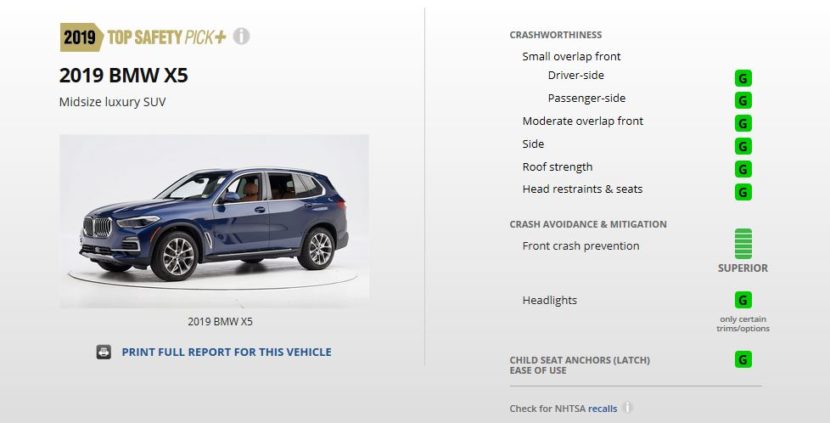 Furthermore, in the Crash Avoidance & Mitigation department it was rated ‘Superior’ while Headlights were also rated ‘Good’. In the overlap tests, IIHS noted that “Measures taken from the dummy indicate a low risk of any significant injuries in a crash of this severity.” The same was basically said for side crashes and the roof strength test. As far as crash prevention goes, the system met the criteria at speeds up to 25 mph, avoiding collision.

The headlights also proved to be worthy of the BMW badge, getting an overall rating of ‘Good’. That’s encouraging as this car will most likely be bought by people looking for comfort and safety for their families. The video below shows how crash tests were performed and how the car ended up looking after it was all said and done. There’s also inside footage with the dummy.