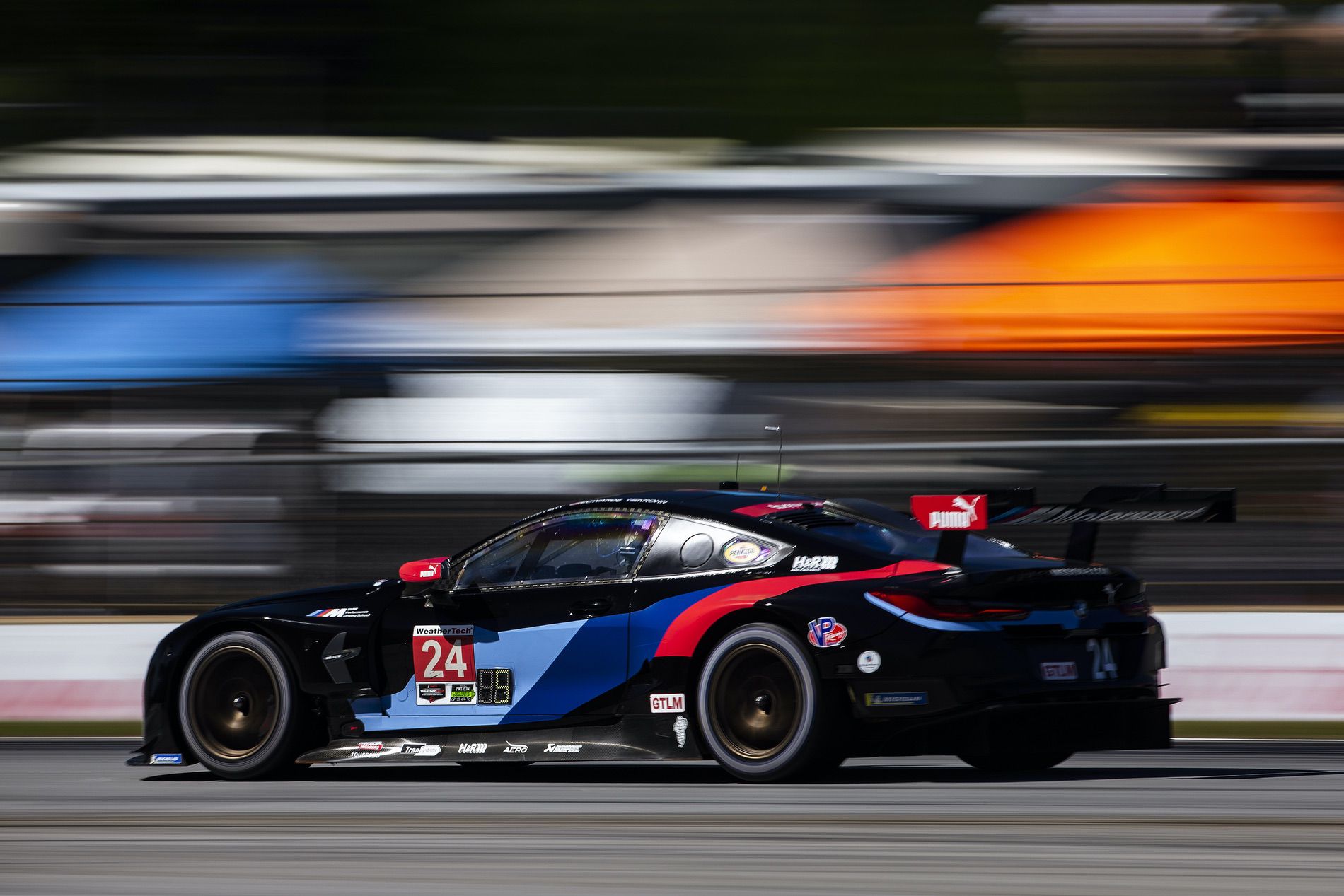 BMW Team RLL closed the inaugural North American season of competition for the BMW M8 GTE with third and fourth place GTLM class finishes at the IMSA WeatherTech SportsCar Championship Motul Petit Le Mans. John Edwards, Jesse Krohn and Chaz Mostert finished third in the No. 24 BMW M8 GTE, completing 419 laps of the 2.54-mile, 12-turn Road Atlanta circuit in the ten hour race after starting from the pole position. Bill Auberlen, Connor De Phillippi and Alexander Sims finished fourth in the No. 25 BMW M8 GTE, only 1.755 seconds behind their sister car after taking the green flag from the seventh spot. The race was won by the No. 911 Porsche 911 RSR. 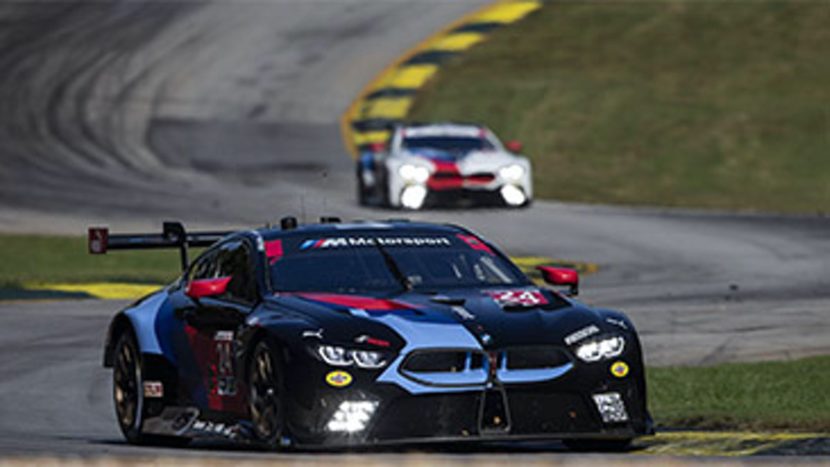 Today’s race saw BMW Team RLL execute flawlessly through ten hours of ever-changing strategy to keep both BMW’s on a podium pace, only the 25 machine falling from the lead lap for a few hours, but fighting to get it back. In addition to finishing only 1.755 seconds apart after 10 hours, the BMW’s fastest laps were even closer – only .08 seconds apart. Edwards set the fast lap for the No. 24 M8 (1:18.185 minutes) on lap five and De Phillippi set the quick time for the No. 25 M8 (1:18.105 minutes) on lap 268. 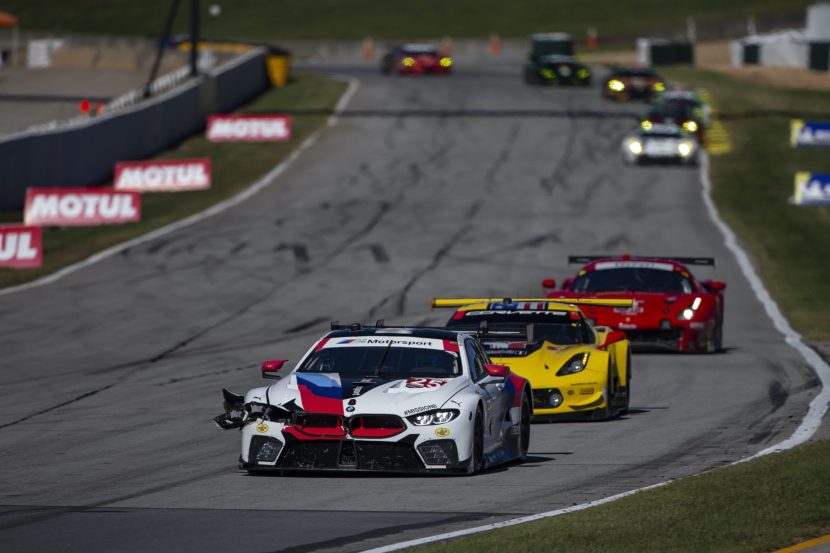 Developed along parallel tracks with the racing BMW M8 GTE, deliveries of the first new 2019 BMW 8 Series road car, the BMW M850i xDrive Coupe, is on the horizon.

“Both crews did great job today,” commented Bobby Rahal, Team Principal. “In the end we did not have quite enough for a win, but P3 and P4 is an excellent result. Our enthusiasm for this M8 continues to grow every race.”

On the 10 year partnership with BMW, “How fortunate we are to have earned BMW’s trust and faith 10 years ago. In racing terms 10 years is a very long time. I think it’s been a great partnership all the way around. We look forward to another 10 years and we certainly hope our relationship with BMW goes even beyond that.” 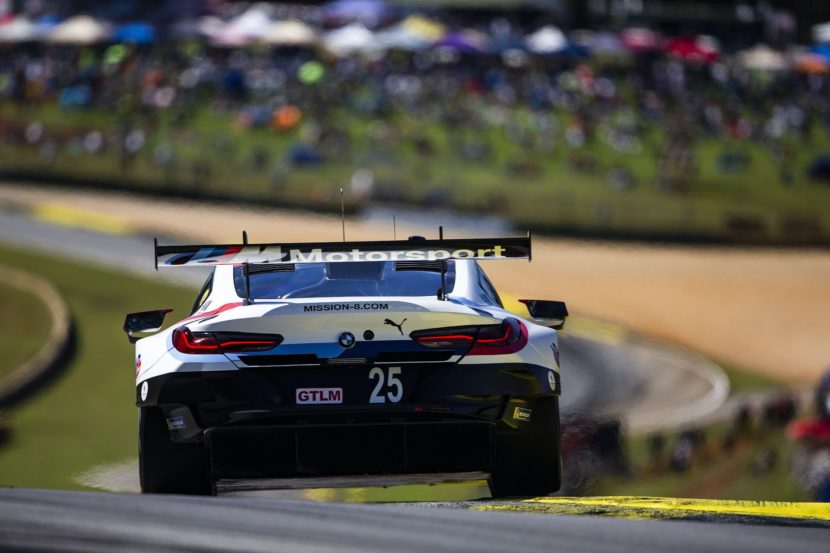 John Edwards, driver No. 24 BMW M8 GTE (P3): “A podium is a great way to end the season. I thought this was going to be our first win of the season and my first win at Petit.”

On the M8 GTE, “The team has done a great job. We’ve really started to figure out the car. Our results speak to all the work that went into the car this time last year by the guys back at the shop. All that work really started to pay off towards the end of this year and I’m sure that will continue next year.”

Jesse Krohn, driver No. 24 BMW M8 GTE (P3): “Overall a really amazing job from the team all weekend. I don’t know what more we could have done to secure the win today.”

On the M8 GTE, “It’s really a different beast now from what it was in the beginning of the year. The development of this car has been nothing short of incredible, the two race wins speak for themselves. It’s been a close to perfect year in a progression sense and I’m really looking forward to next year.”

Chaz Mostert, driver No. 24 BMW M8 GTE (P3): “I really didn’t expect this kind of weekend. I just wanted to get in the car and do a good job. Not knowing a lot about this series I didn’t know how the races really unfolded but with this being an endurance race anything can happen. When you think you’re out of it you can get right back into it. I got carried today by John and Jesse, those guys are superstars. I was just along for the ride. I’m very grateful to BMW Motorsport and RLL for giving me the opportunity to be a part of this race.”

Bill Auberlen, driver No. 25 BMW M8 GTE (P4): “You can’t fault this team for trying so hard. BMW produced a great car. It was competitive all day long from the front to the back and back towards the front again. Today saw a great effort by everyone. You can’t win every race, but we did the absolute best we could.”

On the M8 GTE – “Any new car is a very challenging situation but to come out with two wins, two seconds, and now two thirds in the first season is a fabulous start.”

Connor De Phillippi, driver No. 25 BMW M8 GTE (P4): “We had a tough start but we really pushed hard all race. We treated the last five hours as a sprint race. I’m really happy for the team – especially the 24 car. We all earned it today.”

On the M8 GTE, “In the beginning we had a lot to learn and a lot to develop. We have to be very proud of two wins and both cars being on the podium twice. I’m really happy to be part of BMW and I think we can have nothing but a positive outlook on 2019.”

Alexander Sims, driver No. 25 BMW M8 GTE (P4): “What a finish. That was a really exciting end to the race. The start was very difficult and to claw our way back into the race, be able to push hard and have good pace was really great. The team has worked hard all year and I think it’s a credit to the engineers, mechanics, and BMW to get this car to where it is now. It’s working better and better and the results show that.”

On the M8 GTE, “Inevitably with a new car we have had a lot of learning to do, and we’ve done that during the year. Obviously we had an up and down start to the season, but in the second half to be consistently fast was really enjoyable.”

The No. 96 Turner Motorsport BMW M6 GT3, of Dillon Machavern, Markus Palttala and Don Yount, – the winners at the Six Hours of The Glen this season – were the innocent bystanders in a multi car crash that caromed Machavern into the turn one wall, eliminating the car from the race on lap 68.

On Friday, BimmerWorld Racing finished the Continental Tire SportsCar Challenge Fox Factory 120 on quite a high. Drivers Devon Jones and Nick Galante captured the Street Tuner class Driver’s Championship with a third place finish in their No. 81 BMW 328i. The duo paired for four victories this season to also secure BimmerWorld Racing the ST Team championship. To make the day even sweeter, BimmerWorld owner James Clay and Tyler Cooke captured the first North American overall race win for the BMW M4 GT4, winning the two-hour race in the Grand Sport class No. 82 machine.