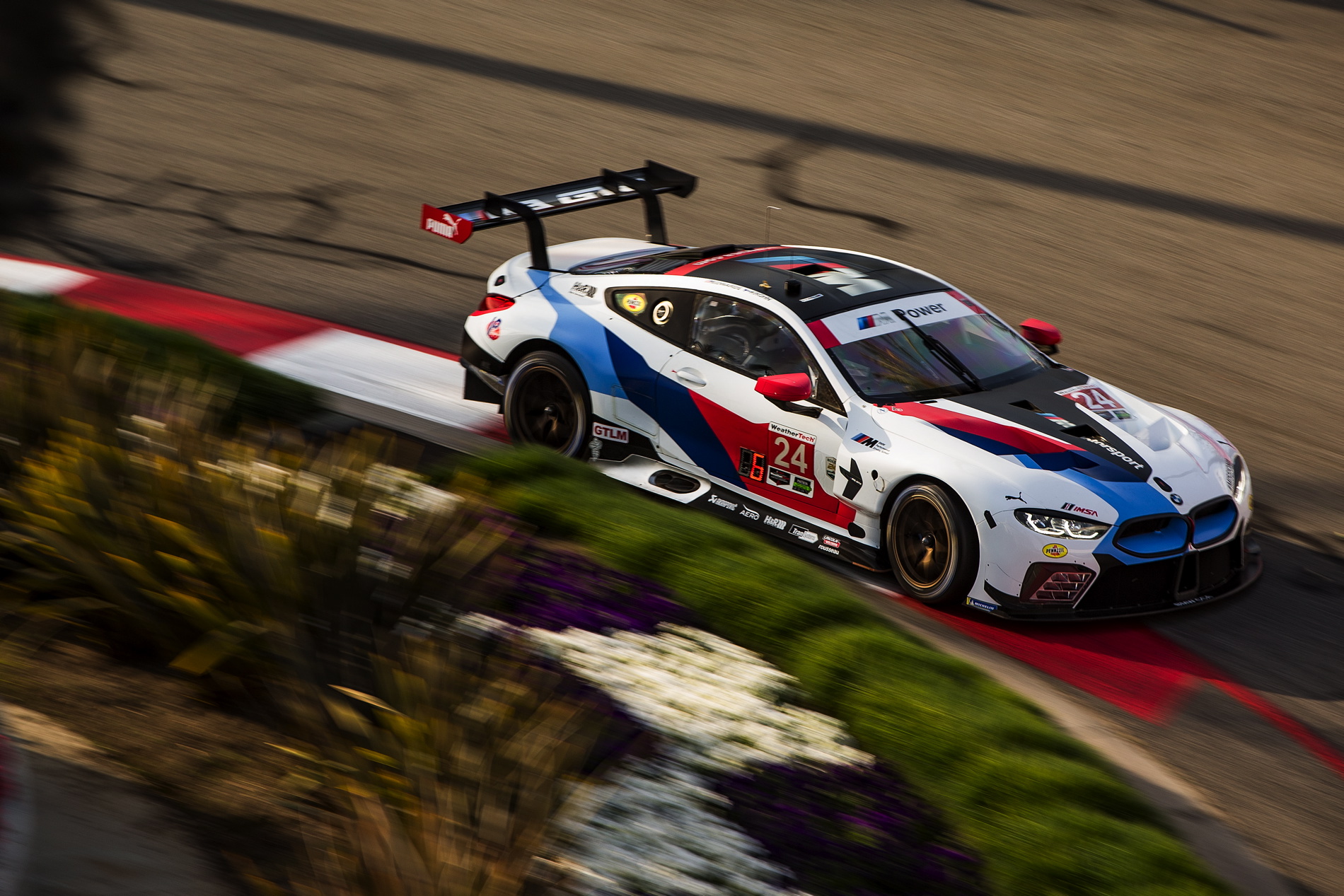 A fifth place finish by the No. 24 BMW M8 GTE of John Edwards and Jesse Krohn in today’s IMSA WeatherTech SportsCar Championship BUBBA burger Sports Car Grand Prix at Long Beach made a difficult day much better for BMW Team RLL. What started as an excellent race for the No. 25 BMW M8 GTE of Alexander Sims and Connor DePhillippi, after clever pit strategy and the luck of a caution period, ultimately saw the car retire from the race on lap 37 after leading for nine laps. 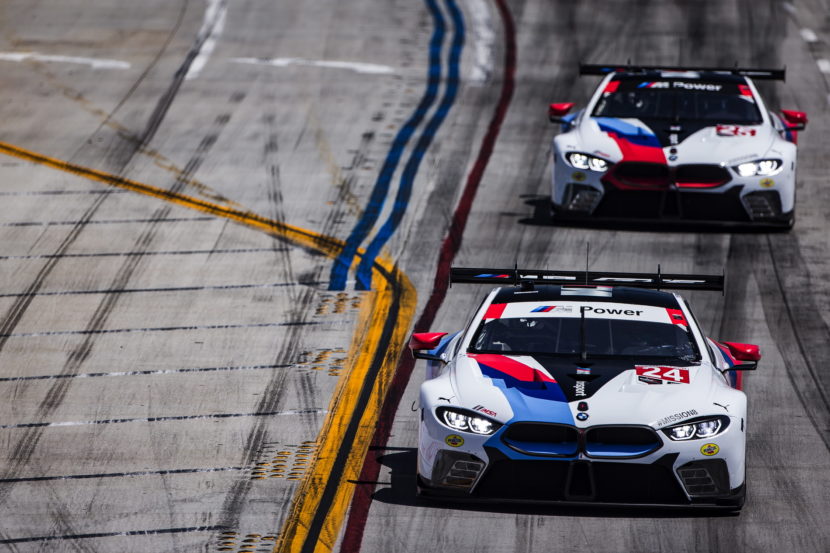 DePhillippi started the No. 25 M8 GTE from the seventh GTLM class position and was the first car in class to pit on lap 17 at the 29 minute mark as the fuel window opened. Sims took over the controls and reentered the race with new Michelin tires and enough fuel to make the end of the race. A broken prototype brought out the race’s second yellow flag minutes later allowing Sims to save fuel and cycle to the front of the class as the balance of the field made their stops. Krohn, who had started the race in the eighth position, held position in the No. 24 M8 GTE.

After leading nine laps,  Sims was hip-checked back to second place at the fountain complex by the No. 912 Porsche.  Edwards, now behind the wheel of the No. 24 M8 GTE from lap 23, raced in the seventh position. The complexion of the race for BMW changed on lap 36 when Sims tagged the wall exiting the turn 10 hairpin and was forced to the pits. Ultimately, the car was retired. Lap 40 saw Edwards take over the sixth position. 11 more laps saw the No. 24 M8 move up to fifth as the No. 912 Porsche pitted with damage. Edwards held the position for the remaining 20 minutes of the contest to score a fifth place finish. 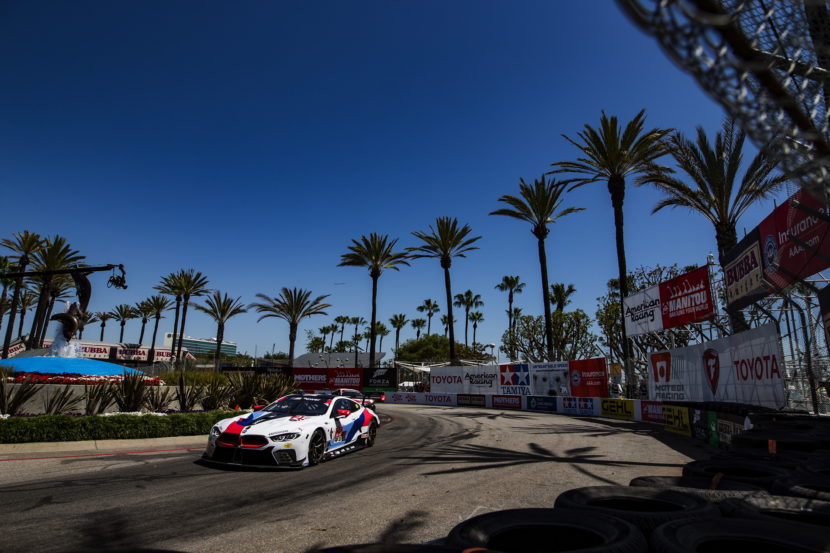 “A fifth place almost feels like a win,” said Bobby Rahal, Team Principal. “Our strategy worked out well initially, pitting early and getting one of the cars into the lead after the yellow. It was obvious that it would be very difficult for us to stay in the lead however. I am disappointed for the team as everyone has worked very hard and to not have the pace is very tough. Long Beach is a handling track but we still needed some more grunt. We will keep working hard and hope we will get back to the pace we had at Sebring.”

Connor De Phillippi, driver No. 25 BMW M8 GTE (DNF): “The team made a perfect strategy call to come in early. We played it relatively smart in the beginning to get out with the lead under yellow. We ran as hard as we could, as we have the whole weekend, but it simply wasn’t quite enough. Alex was fighting hard out there for us. Some days aren’t your days and today wasn’t ours. We will analyze and move on to the next event and try to get back into the fight for the podium.” 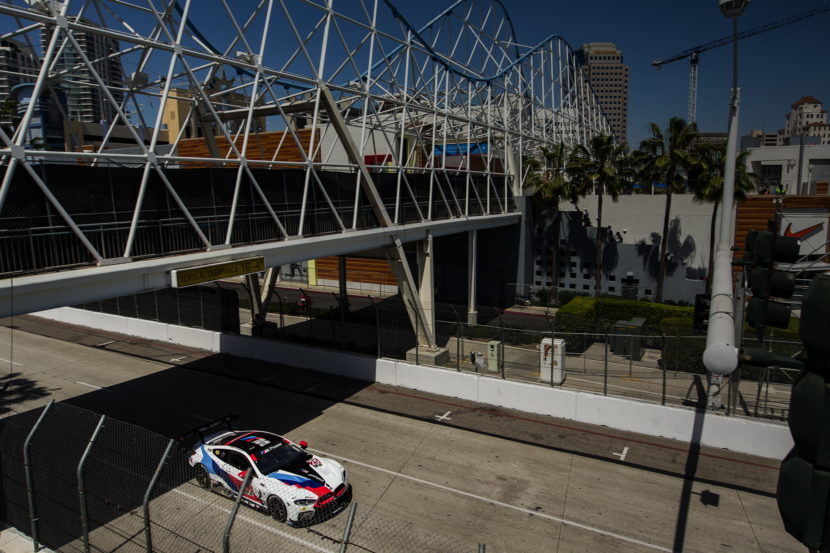 Alexander Sims, driver No. 25 BMW M8 GTE (DNF): “In the beginning, the team made a great call on strategy putting us ahead of everyone else. If the car and I had had more pace we would have been able to make it stick and would have gotten a great result from it.”

John Edwards, driver No. 24 BMW M8 GTE (P5): “We executed a good race even though we knew we did not have the pace from qualifying. We planned to have one car do a non-traditional strategy and it worked when Alex got the lead under yellow. Unfortunately it did not go as planned when the No. 25 car was pushed wide and hit the wall. We were able to run a clean race in the No. 24 car and I think we executed well but did not have the pace throughout the weekend and had to find ways to make up spots.”

Jesse Krohn, driver No. 24 BMW M8 GTE (P5): “We got the best out of the car we could today but we simply did not have the pace. We got to the front with the No. 25 through great use of tactics but you saw the other cars driving around us. I am very happy for what we were able to do today with what we had.”

Round 4 of the 2018 IMSA WeatherTech SportsCar Championship, the ACURA SportsCar Challenge, will take the green flag at 1:05 p.m. ET on Sunday, May 6 and be broadcast live on Fox Sports 2 beginning at 1:00 p.m. ET. Follow BMW Team RLL on Twitter at @BMWUSARacing for “from-the-pit-box” updates all weekend.