In the recently released video of the BMW 8 Series running around a circuit in Italy, we learned that its exhaust note is delicious. It sounds different from every other BMW at the moment and could be the best sounding Bavarian. To be honest, though, the bar isn’t that high for BMW at the moment. It used to be a brand with exhaust notes and induction noises that tingled the spine. Now, though, there are more “meh” sounding BMWs that brilliant ones. Which is a shame becasue we know that BMW is capable of so, so much better. Take the E60 BMW M5, with its 5.0 liter, naturally-aspirated V10, for example.

In this video, we get to listen to various different E60 BMW M5s driving around with various different exhausts, ranging from stock to all sorts of different aftermarket units. Each and every one sounds absolutely brilliant. Even bone stock, the E60 BMW M5 is a serious contender for the best-sounding production car of all time.

What I really like is that aftermarket exhaust upgrades don’t diminish the quality of its noise. Even with aftermarket exhausts, the E60 BMW M5 sounds brilliant. It’s burbly at low revs but it shrieks and howls at high revs. It’s a symphony of the best automotive noises and it genuinely makes music.

Modern turbocharged BMWs, or most turbocharged engines actually, seem to lose their sound quality with most aftermarket exhausts nowadays. They seem to have too much bass and basically just become pop and bang machines. A little bit of oops and burbles are great on the overrun but when they’re the primary noises of the exhaust, it just sounds sloppy. And that’s what it seems like most exhausts are, especially on modern turbocharged cars. It’s as if exhaust companies are trying to compensate for the fact that most turbocharged engines sound relatively dull. 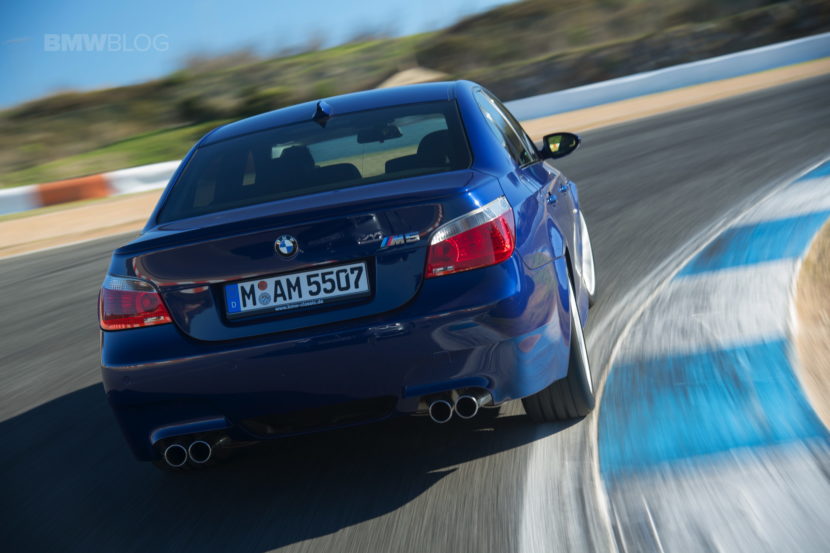 Not the old E60 BMW M5, though. It doesn’t matter what exhaust is mated to it, it sounds superb. Listen to it scream and smile.