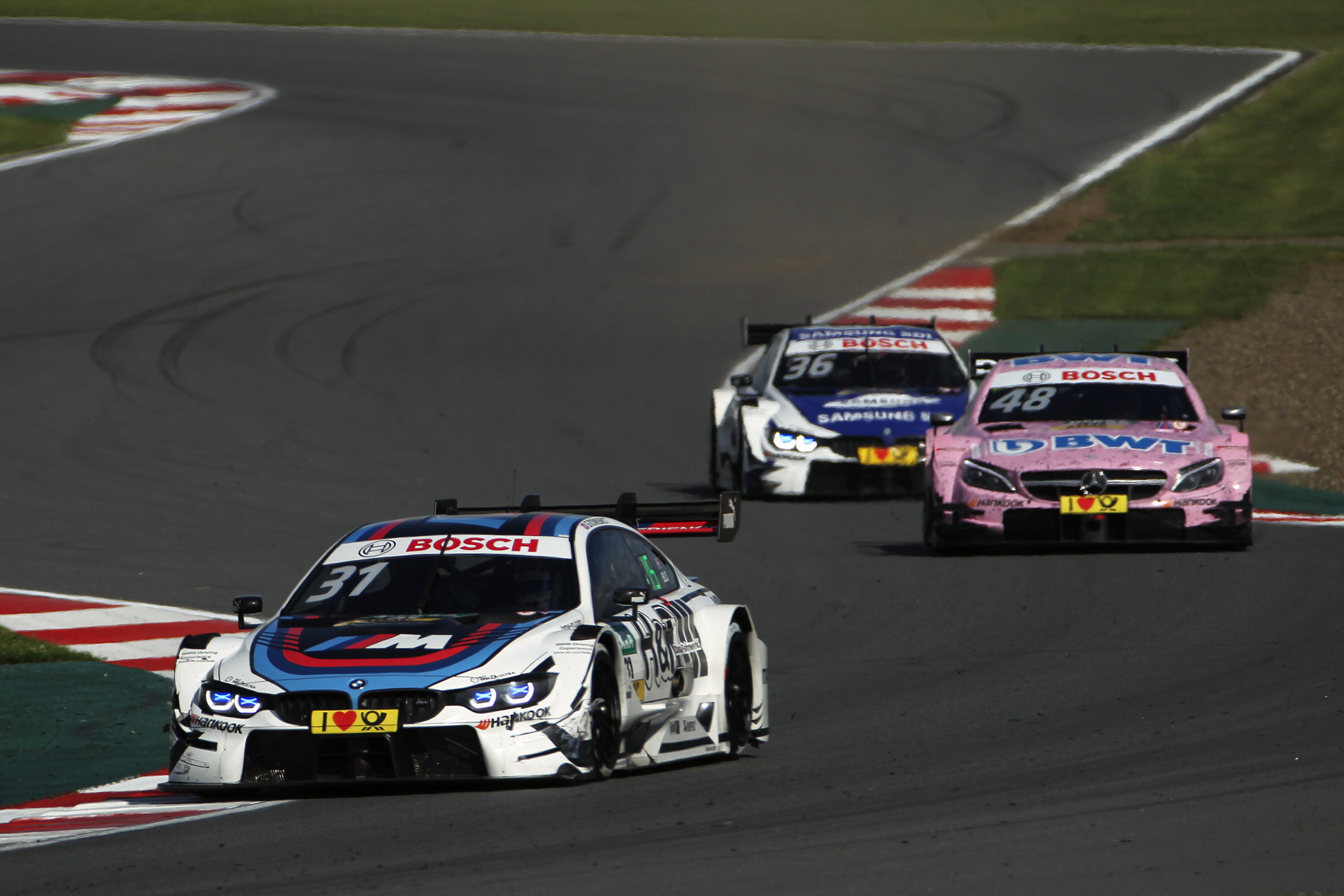 Marco Wittmann (GER) finished on the podium in third place in the ninth race of the DTM season, at the Moscow Raceway (RUS). A year after his win at the same venue, he got BMW’s tenth podium position overall at the track just outside the Russian capital. Wittmann clocked the fastest time in qualifying and was rewarded with three points in the drivers’ standings. However, he started from sixth on the grid because of a penalty after the Norisring weekend. Timo Glock (GER) in fifth, also picked up valuable points and is now seventh in the overall standings, ahead of Wittmann. The other BMW drivers missed out on the points, victory went to René Rast (GER, Audi). 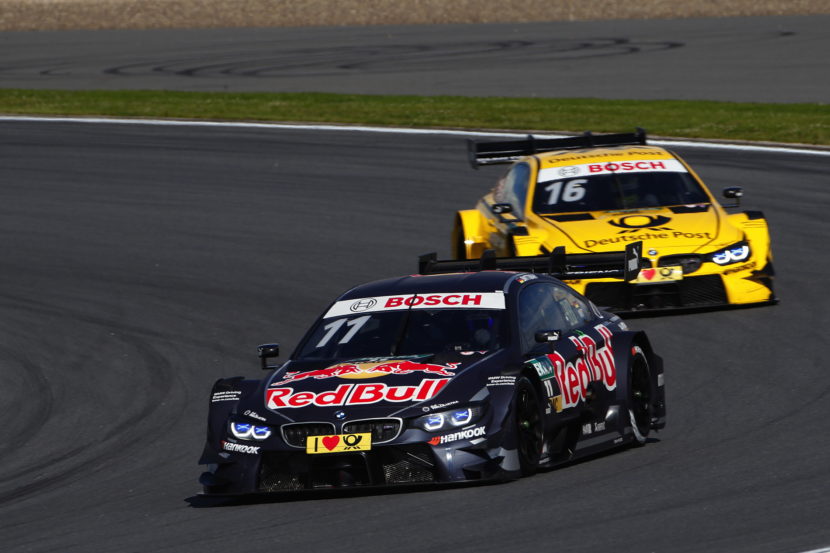 Marco Wittmann (GER) got the best time of the session with 1:27.035 minutes in his Red Bull BMW M4 DTM and was rewarded with three points in the drivers’ standings. However, he wouldn’t start from pole position because his third warning of the season at the Norisring (GER) meant that he had a five-place grid penalty for Saturday’s race in Moscow. This saw Augusto Farfus (BRA) in the Shell BMW M4 DTM move up a place after recording the fourth-fastest time in qualifying making him the best-placed BMW driver in third on the grid. Right behind him was Timo Glock (GER) in the DEUTSCHE POST BMW M4 DTM in fourth place. Tom Blomqvist (GBR, BMW Driving Experience M4 DTM) was in eighth place. Bruno Spengler (CAN, BMW Bank M4 DTM) and Maxime Martin (BEL, SAMSUNG BMW M4 DTM) qualified in eleventh and 15th place, but also moved up a place after Loic Duval (FRA, Audi) was awarded a penalty. 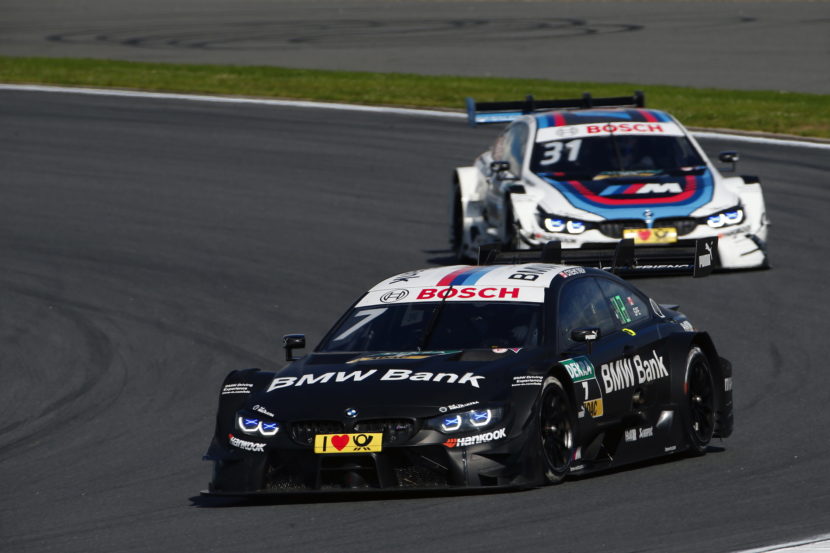 In a turbulent opening phase, Augusto Farfus, Marco Wittmann and Timo Glock settled into third, fourth and fifth place. During this Glock was embroiled in a close battle with Mattias Ekström (SWE, Audi), which saw him receive a warning. On lap three, as Farfus attempted to move into second place, he came into contact with Mike Rockenfeller (GER, Audi) and was forced off the track. The Shell BMW M4 DTM suffered damage, Farfus then dropping to the back of the field after the early pit stop. Maxime Martin and Tom Blomqvist also fell down the order after early stops. At the end of lap 11, Glock overtook Wittmann in the battle for third place. The reigning champion regained the position after the round of pit stops. Wittmann was then involved in a fierce duel with Robert Wickens (CAN, Mercedes). He initially had to let the Canadian pass, but regained the podium position in the closing stage of the race. Glock finished fifth, Spengler in 12th missed out on the points, as did Martin in 16th place. Farfus and Blomqvist returned their damaged cars to the pits early. The win went to René Rast.

BMW Motorsport Director Jens Marquardt: “After fighting performance, Marco Wittmann finished on the podium. That is a fantastic result after he got the fastest lap in qualifying and then had to start the race from sixth due to the penalty from the Norisring. Timo Glock in fifth also picked up points. Overall, we could have got more out of today but the tough manoeuvres of some of our rivals prevented that. Mike Rockenfeller’s behaviour towards Augusto Farfus was far from sporting. It ruined Augusto’s race, but we are pleased with the points from today and will really go for it tomorrow.”

Stefan Reinhold (Team Principal, BMW Team RMG): “After the great team result in qualifying, it goes without saying that I am delighted with our podium success in the race thanks to Marco Wittmann and with Timo Glock in fifth place also picking up points. I feel very bad for Augusto Farfus. He was doing a fantastic job right from the word go this weekend and started from third on the grid. Then what happened to him in the race – I’m talking about the manoeuvre with Mike Rockenfeller – leaves me lost for words. It was very dangerous. We’ll be taking another look at it.”

Marco Wittmann (#11, Red Bull BMW M4 DTM – Grid position: 6th place, race result: 3rd place – 65 races, 8 wins, 17 podiums, 8 pole positions, 587 points, 2 drivers’ titles): “From sixth on the grid, the race went well for me as a whole. It’s always nice to finish on the podium. I got off to a good start, then I had a few good duels with Timo Glock and Robert Wickens. Robert overtook me temporarily and was able to build up a lead. Towards the end of the race my pace improved continuously and I was able to manage the tyres well. This enabled me to get closer – and reclaim third place. Without the penalty on the starting grid I could have done even better, but it doesn’t matter. We can build on today’s result.”

Augusto Farfus (#15, Shell BMW M4 DTM – Grid position: 3rd place, race result: retired – 75 races, 4 wins, 12 podiums, 5 pole positions, 351 points): “I’m very disappointed. We could have come away with a lot of points today. I was engaged in a duel with Mike Rockenfeller. I feel that his reaction to my attack was overly aggressive. I was clearly on the inside, then he blocked me and tried to push me off the track, which I feel was very unfair. I’m surprised that he got away with a warning. My race was certainly over after that.”

Timo Glock (#16, DEUTSCHE POST BMW M4 DTM – Grid position: 4th place, race result: 5th place – 65 races, 3 wins, 7 podiums, 2 pole positions, 283 points): “It was a tough race, and it seems like Mattias Ekström and I won’t be buddies in Moscow. The duel with him going into turn three was very difficult. He kept moving in from the outside. We came into contact two or three times. After the duel, I had a good pace in the first stint but I had to battle on the second set of tyres. I don’t know why this was the case, maybe because my car was damaged at the front right. I had a great deal of understeer and the front right tyre was vibrating. Fortunately, I was able to finish in fifth place. I couldn’t have improved on that. It’s great that Marco Wittmann made it onto the podium. That means our race Saturday had some measure of success.”

Bart Mampaey (Team Principal, BMW Team RBM): “We attempted an alternative strategy with Maxime Martin, but then didn’t have the best pit stop which saw him drop back. The pace was ok. The tyres lasted 37 laps, which is really good in Moscow. Tom had a collision at the start, which damaged the car. Bruno’s pace was okay, but he ended up in the middle of a group of cars after his stop. We knew that it would be close. He battled, but was overtaken by Müller and lost ground on cold tyres. It’s a real shame, but that’s racing.” 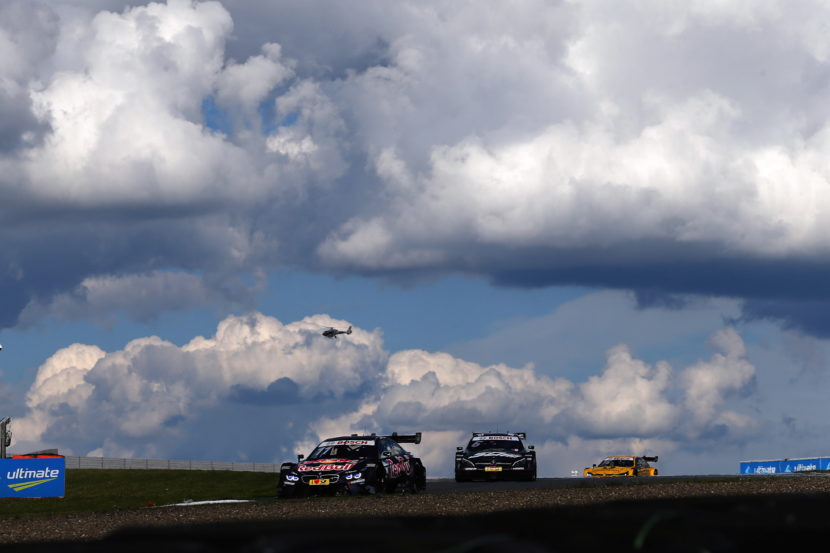 Bruno Spengler (#7, BMW Bank BMW M4 DTM – Grid position: 10th pace, race result: 13th place – 148 races, 15 wins, 47 podiums, 17 pole positions, 801 points, 1 drivers’ title): “Today really wasn’t my day. We were unlucky in qualifying with the second set of tyres; we could have had a better result. I was in tenth place in the first stint of the race and the car felt good. After the stop I was unable to keep my rivals on warm tyres behind me. I got stuck behind Nico Müller for a long time – and then my tyres wore down. Then there was nothing more that could be done.”

Tom Blomqvist (#31, BMW Driving Experience M4 DTM – Grid position: 8thplace, race result: retired – 44 races, 1 win, 5 podiums, 2 pole positions, 187 points): “I didn’t have a good start, which meant that I was under pressure from a few of the other drivers at the start. My car was damaged by a collision in the turmoil, which meant that I was unable to finish the race.”

Maxime Martin (#36, SAMSUNG BMW M4 DTM – Grid position: 14th place, race result: 16th place – 55 races, 3 wins, 9 podiums, 3 pole positions, 309 points): “We decided to change the tyres after the first lap, seeing as we had to start the race from so far down the field. Unfortunately, we had a problem during the pit stop, which meant we lost time. Then I was stuck behind Edoardo Mortara. 16th place is not a good result, but tomorrow is another day.” 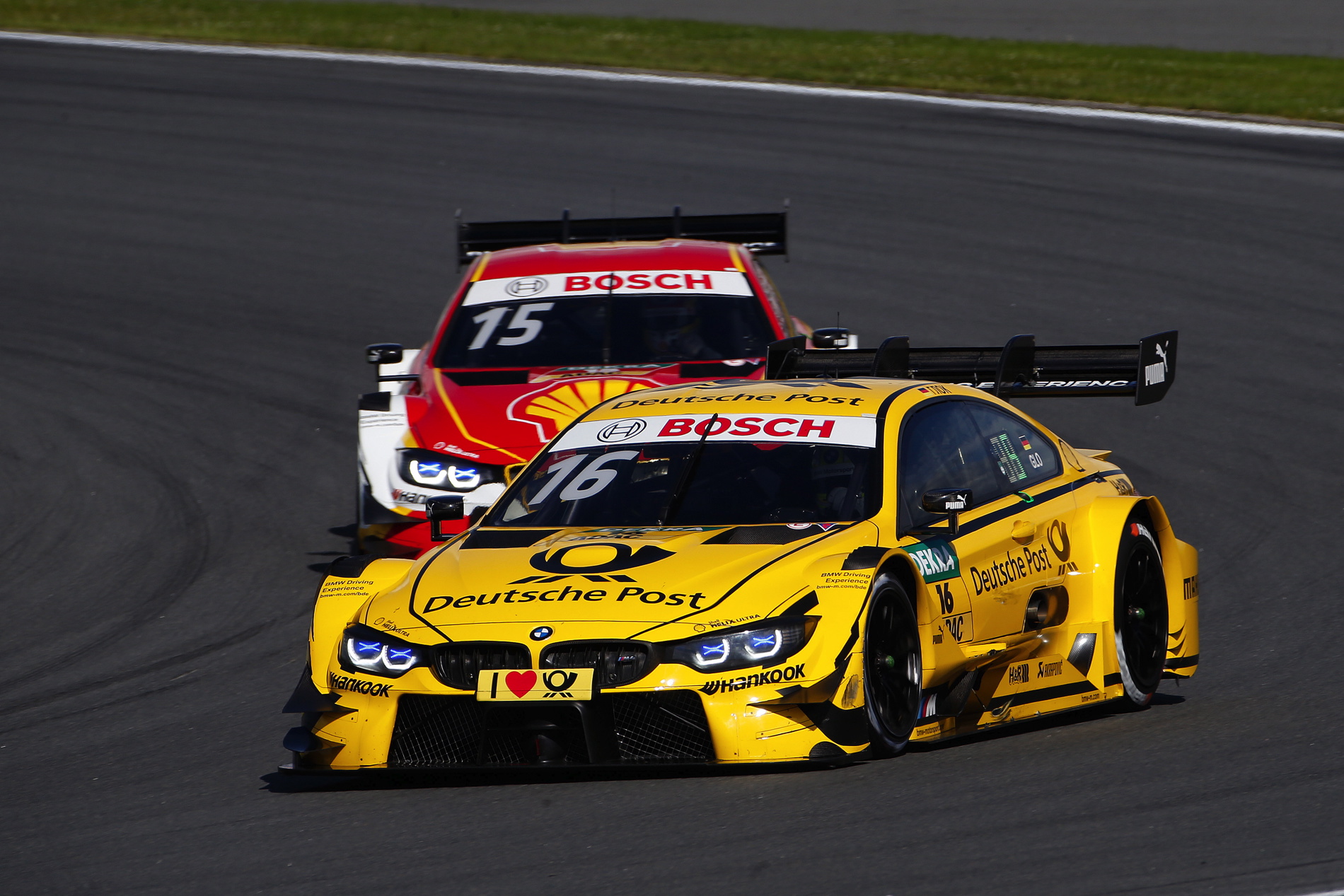 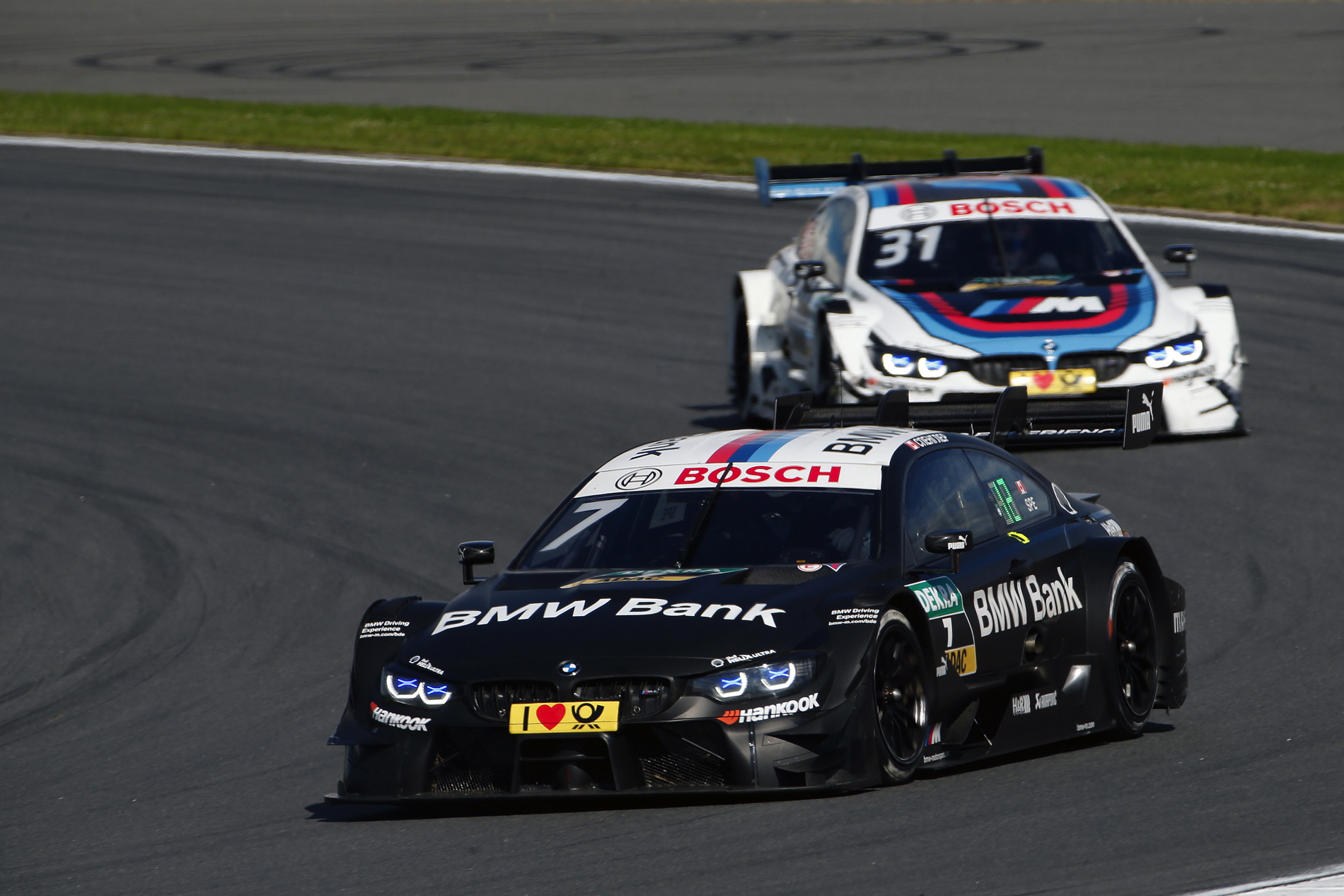 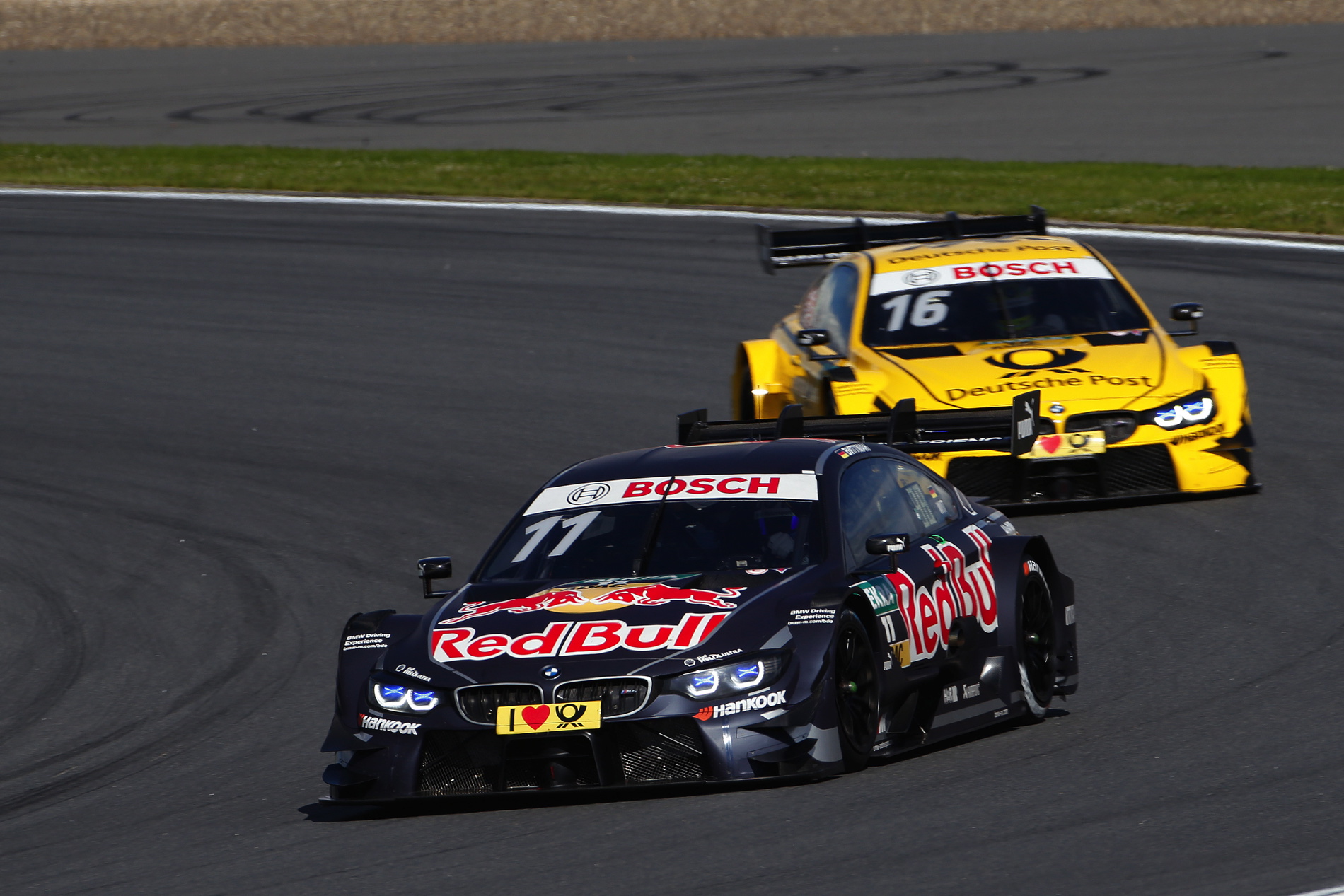 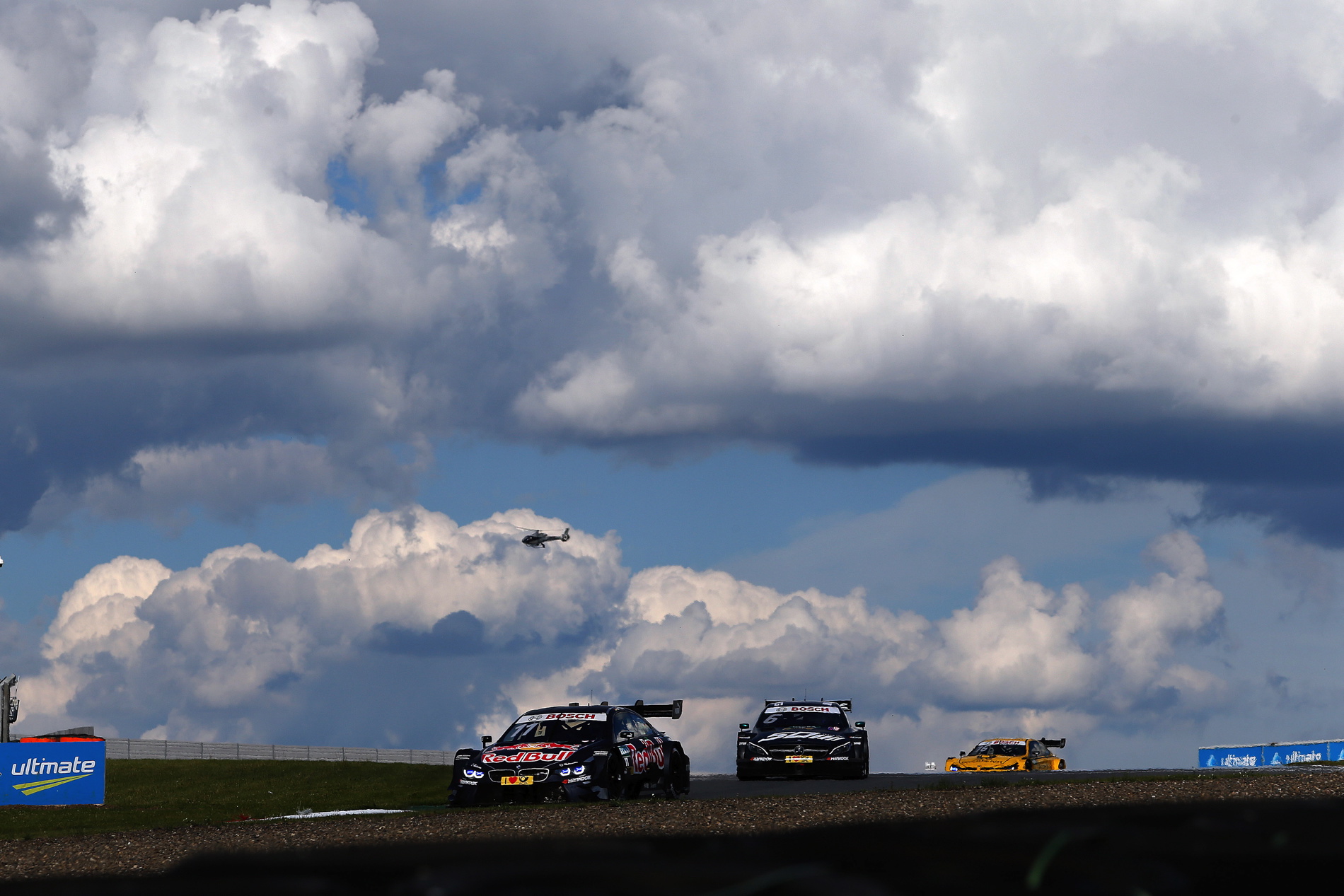 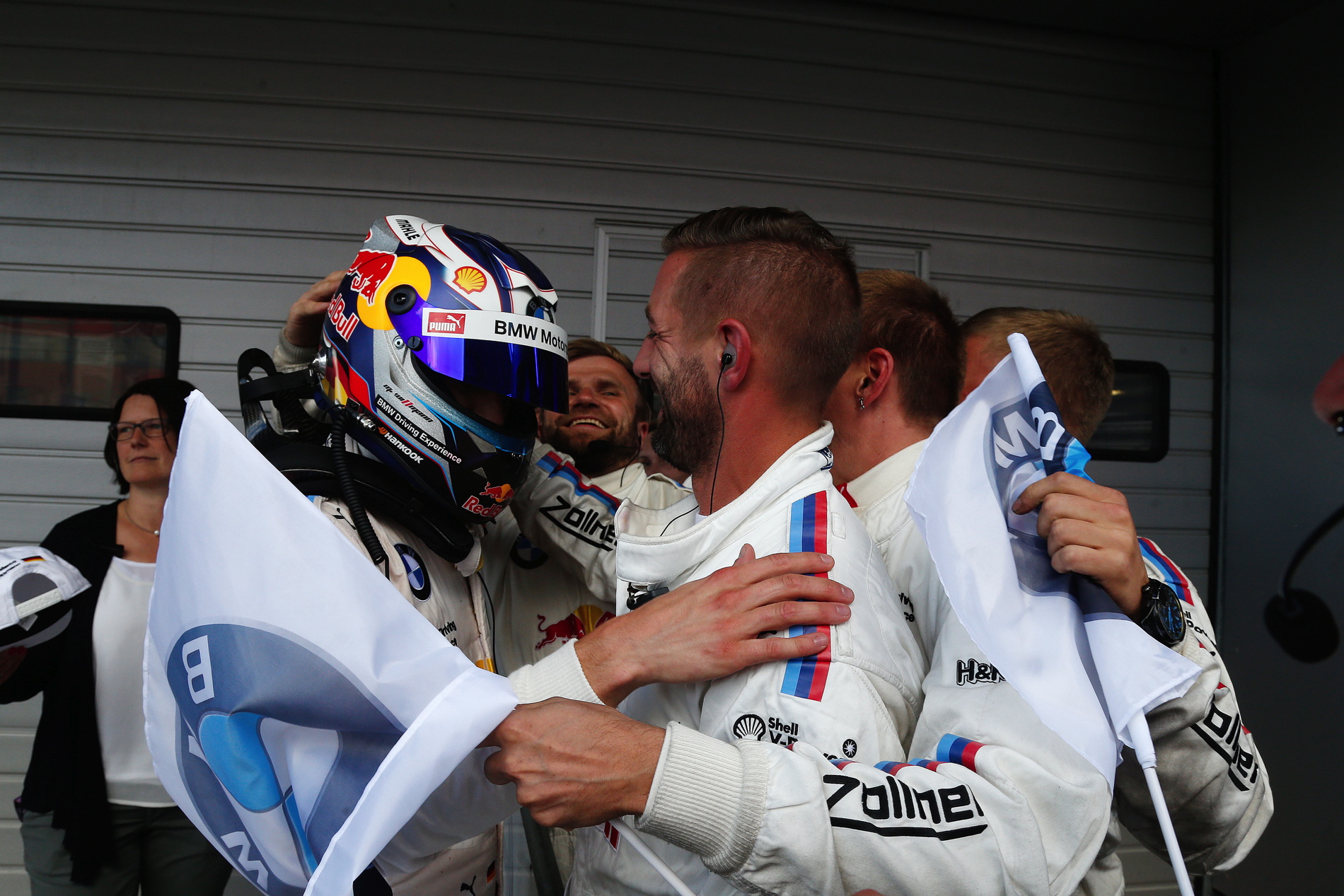 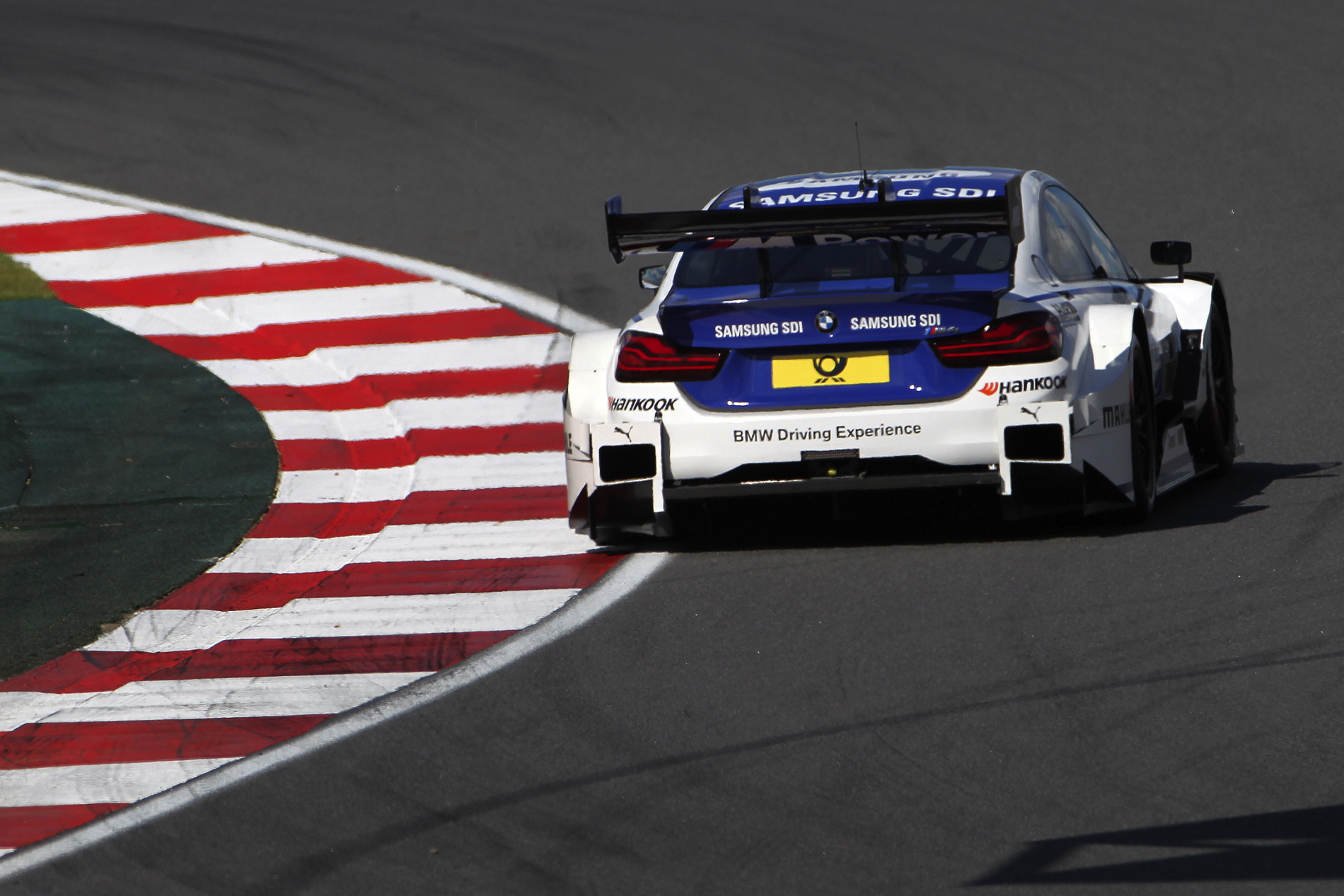 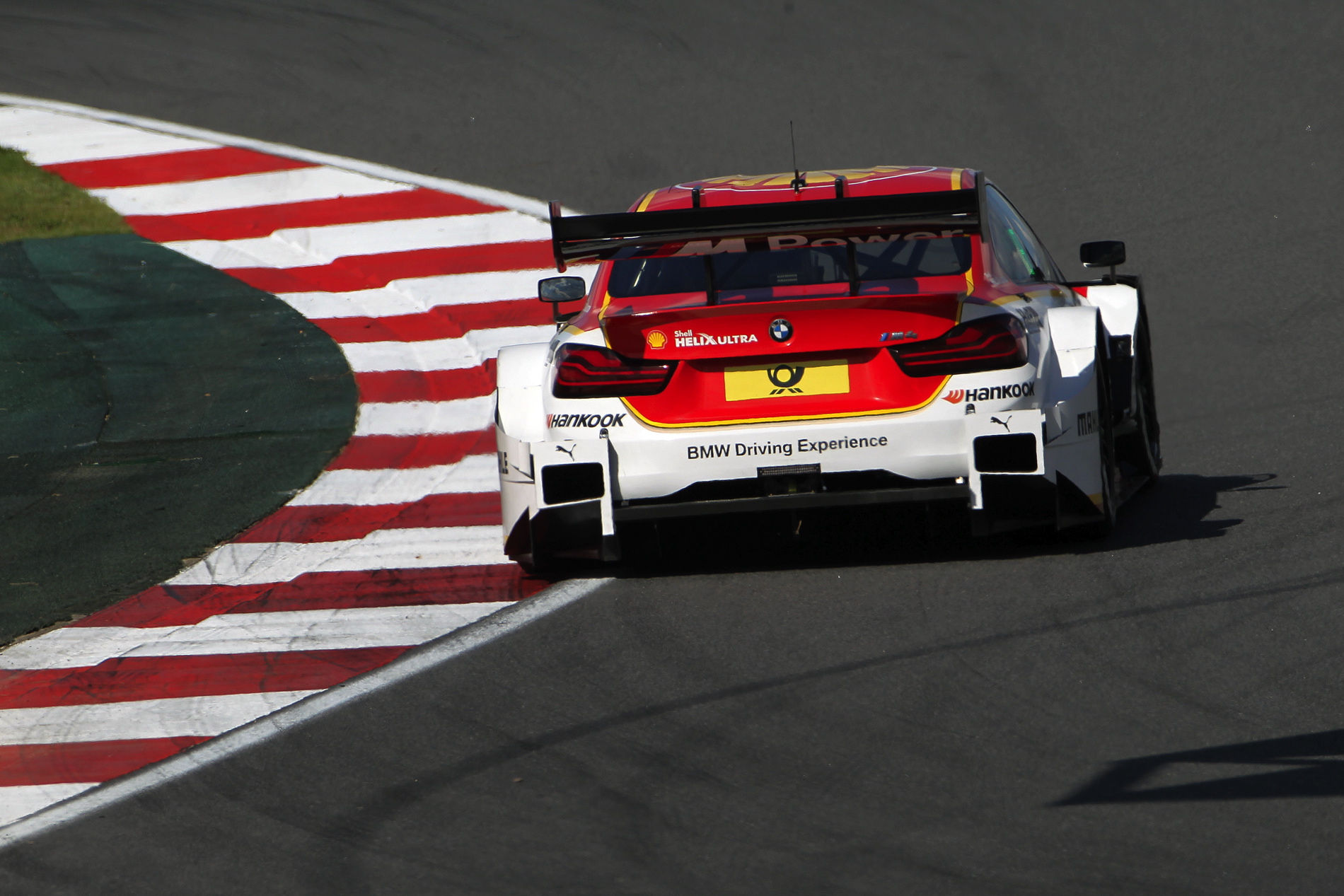 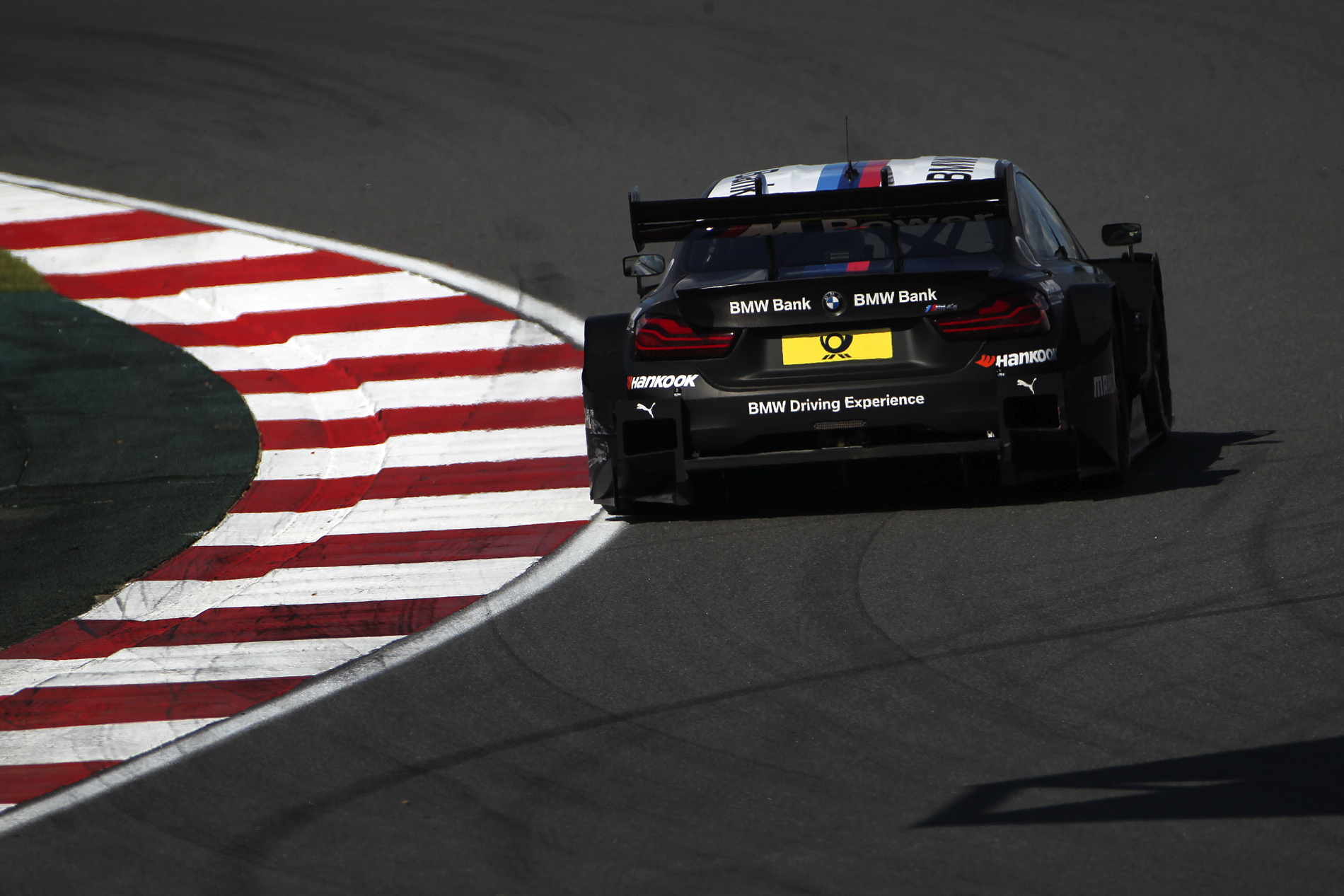 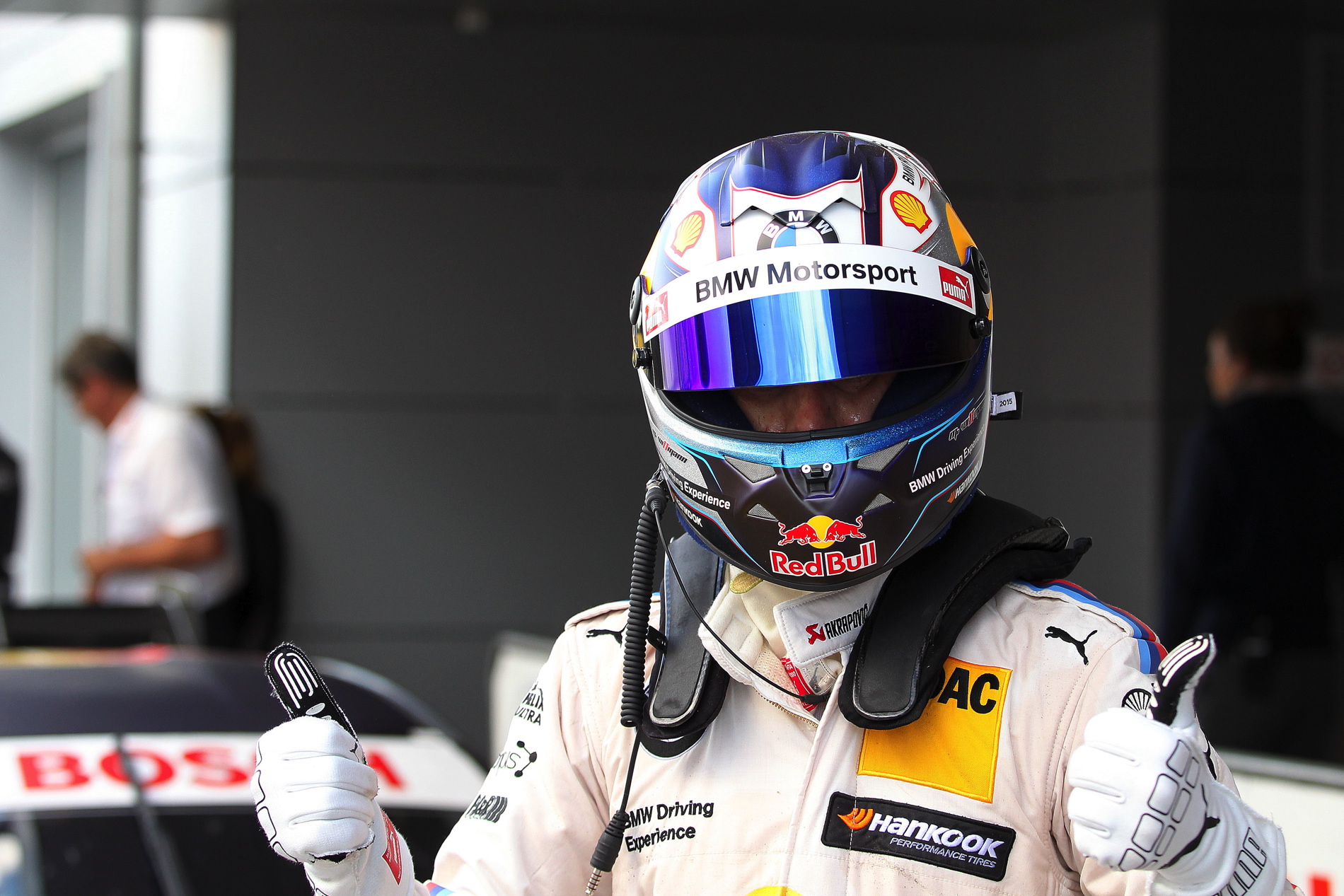