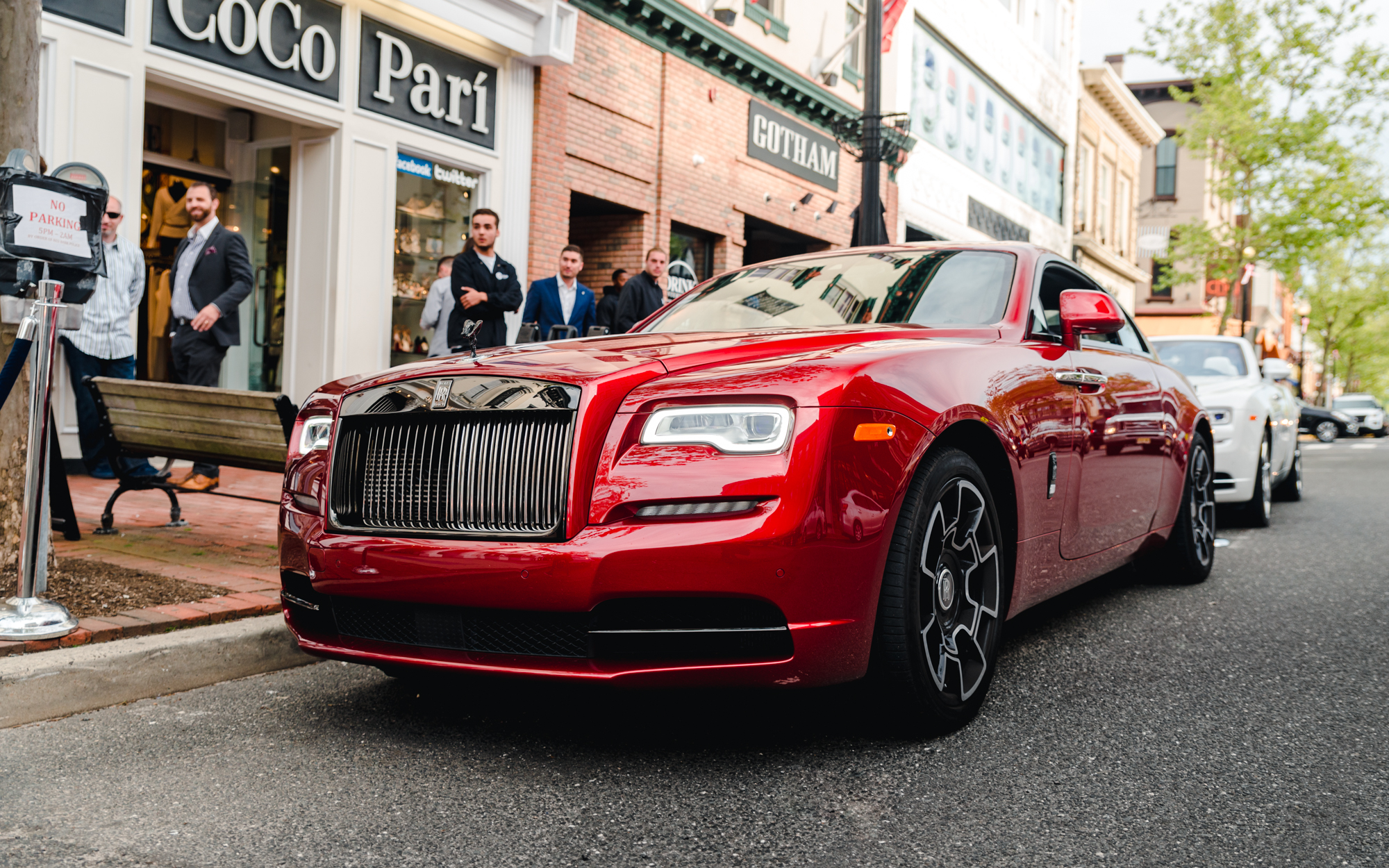 We recently took a look at some of the brilliant cars that were on display at the 2017 Greenwich Concours d’Elegance. We attended that Concours event with Rolls Royce, which was incredibly kind of the famous British brand to welcome us along. What was even kinder was allowing us to drive a Rolls Royce Wraith Black Badge for the day. There are worse ways to spend a Sunday.

The drive started off in South New Jersey, where I live. We took the Wraith Black Badge from South Jersey up through New York and into Greenwich, Connecticut. The drive allowed us to test the big Roller in a variety of different circumstances, through city traffic, suburban neighborhoods, twisty roads and open highway cruising. In all situations, the Wraith Black Badge handled exceptionally. While you don’t expect anything less from Rolls Royce, it’s still surprising to see just how well the Wraith BB held up against literally every type of driving. 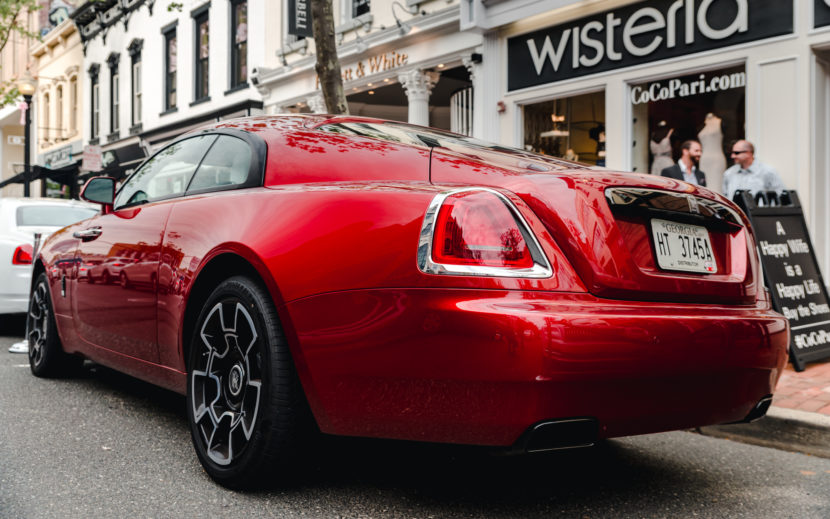 But first, let’s start with what the Rolls Royce Wraith Black Badge is. The Wraith is the top of the line car in the Rolls Royce lineup (along with its convertible counterpart, the Dawn) and the Black Badge is the most stylish and most exciting variant of it. While the standard (if you can call any Rolls standard) Wraith is for most customers, the Black Badge is aimed at a bit of a different market and it’s immediately noticeable. From the outside, the massive classic grille surround, front air inlets, bootlid finisher, exhaust tips and iconic Spirit of Ecstasy hoop emblem are all finished in a wonderfully seductive dark chrome. It gives the car a much more menacing presence and one that’s more youthful and exciting than the standard car’s.

So rather than being aimed for the traditional type of luxury car customer, the Wraith Black Badge is aimed more at tech millionaires and athletes. It’s aimed at a far younger audience and it’s immediately noticeable. There’s a presence to the Black Badge that feels far flashier, far more exciting and even a bit, dare I say it, naughty. There’s a bit of a juvenile feeling to having a Rolls with blacked out trim. Though, it’s an exciting one.

Our specific tester was wearing a stunning shade of Cherry Red paint and it was absolutely gorgeous. It’s also the only Cherry Red Rolls Royce Wraith Black Badge in North America. So we felt a bit special, to say the least. While the color’s name is a bit uninspired for Rolls Royce, it may be one of the most beautiful I’ve ever seen on a Rolls. It’s almost impossible to realize from pictures but the paint work on any Rolls is perfect. It’s not great, it’s not superb, it’s not even incredible. It’s absolutely, almost impossibly perfect. I’ve never seen such a mirror finish on a car’s paint in my life. In gorgeous Cherry Red with Black Badge bits, the Wraith looks like an absolute rockstar. 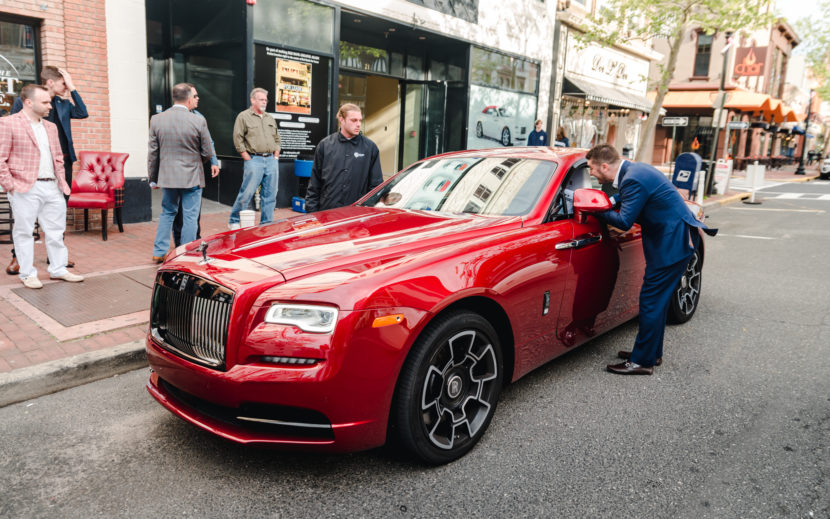 That feeling extends into the cabin, as well. The black and white color scheme of our tester’s cabin looked very upscale and very luxurious. With the color scheme and impeccable build quality, stepping into the Rolls Royce Wraith Black Badge is like slipping on a perfectly tailored tuxedo.

Inside the Rolls, the cabin is lined with more leather than a German rave club and there are really only two other materials inside: wood and metal. While there are a handful of plastics, for things like the gear selector and indicator stalks, there are basically only three materials used in the car. Almost every single surface is covered in the richest feeling leather I’ve ever felt and what isn’t covered in leather is either real aluminum or real wood. Thankfully, our tester didn’t have any carbon fiber bits, which looks a bit tasteless in a Rolls.

The seats are superbly comfortable, supportive and almost couch-like in a way that made hours feel like minutes. They even hold you in surprisingly well when driving quickly. There really are sport seats that would be shamed by these thrones. The ergonomics aren’t the best, if I’m honest, but the switchgear is so wonderfully built that you don’t even mind. 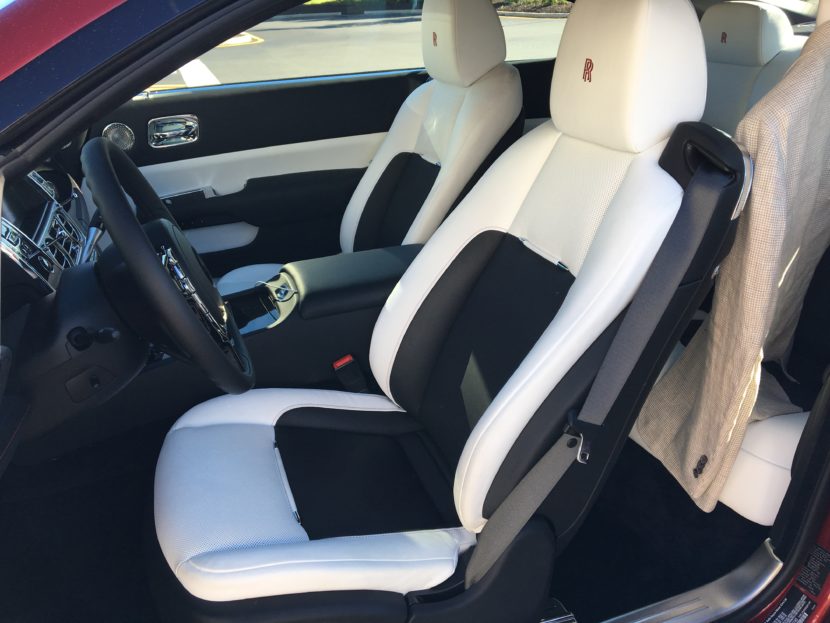 Under the hood of this massive car is a BMW-sourced 6.6 liter twin-turbocharged V12. It makes 624 hp and 642 lb-ft of torque, or enough to shame a Lamborghini Huracan. That mighty motor is paired with a ZF-sourced eight-speed automatic gearbox that’s satellite-aided so it can be near-telepathic with its shifts. That gearbox sends power to just the rear wheels, which you’d imagine could get scary with all of that torque. Though, it never gets out of sorts.

Roll on power is simply like nothing else. It just thrusts the big car toward the horizon as if a tidal wave picked the car up and hurled it forward. The power is immense, immediate and completely intoxicating. They say power corrupts. Whoever they are, they’re absolutely right because once you feel the rush of power, all you want to do is keep engaging it. It even makes a surprisingly good noise, that’s growly and aggressive and, to be honest, slightly off-putting in a car as luxurious as the Wraith. Though, there’s a tongue-in-cheek joy that comes from having such a monstrous and aggressive engine under the hood of such an elegant vehicle.

Shifts from the ZF-eight-speed are smoother and even more imperceptible than in a BMW. Neither up nor down, shifts can never be felt and, because of the smoothness of the engine, can almost never even be heard. Add in the lack of tachometer and there’s almost no way to know which gear you’re in. Though, that’s sort of the idea. Rolls Royce customers don’t want to know which gear they’re in nor do they care. They expect the car to take care of that for them and that’s exactly what it does. I also do kind of like the “Power Reserve” gauge, rather than a tach. There’s something fun about seeing that you’re only using a fraction of the power and still doing insane speeds. 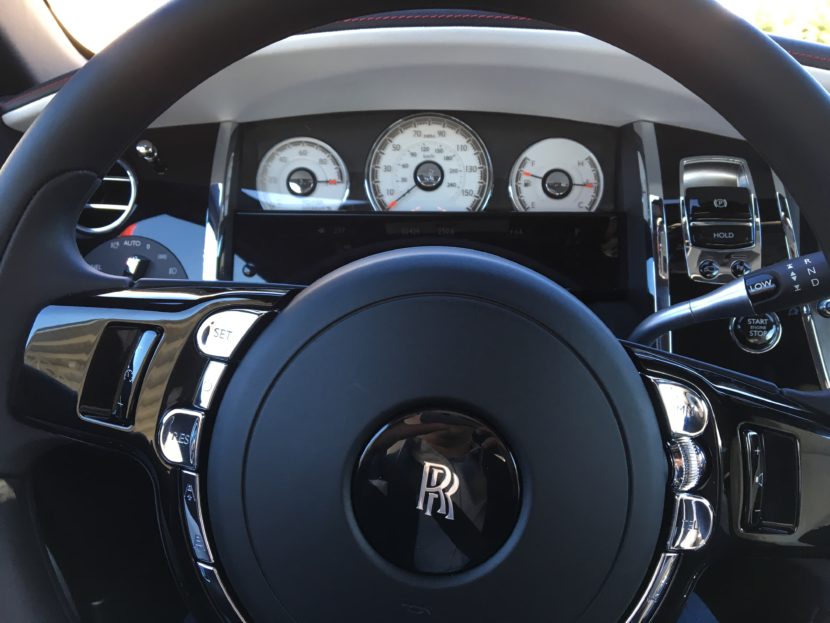 Driving down some suburban roads and in traffic, the Rolls Royce Wraith Black Badge, never ceased to garner stares, iPhones snapping pictures or bystanders smiling and shouting things at us. It actually makes you feel more important in a weird, sort of narcissistic way. Not in a bad way, there’s just a feeling of enjoyment out of how much attention the car is getting and I’m by far and away the last person who wants attention. The car has an aura about it that’s intoxicating for everyone surrounding it. It’s fantastic.

But better than that is how it drives. Full discretion, I thought the Wraith was going to drive like a big, squishy grand-tourer that’s incredibly comfortable to be in and ride in but boring to drive. I was very, very wrong. The steering is light but not as light as I had assumed. There’s actually some heft as you turn the wheel and the weighting builds nicely, giving the impression of feel, though there isn’t any. However, it’s accurate and places the front end as well as it can. While it’s not what I’d call sharp, front end is more accurate that you might imagine. It’s no Porsche 911 but it can be placed relatively where you want, which is impressive for such a big heavy car.

During a portion of our trip, through some of New Jersey and Connecticut, there were some opportunity to see how well it handled through corners. Through some twisty sweepers, the Wraith Black Badge is exceptional. It’s no driver’s car, but the way it strings together a few longer turns is genuinely enjoyable. Turn in and the front end bites but the body takes a second to set. The body rolls over a bit and you feel the weight transfer and settle on its one side. Once you feel it set, mash the throttle and the might V12 will pull you through the corner with simply crazy velocity. It’s actually fun and enjoyable, which is mind-blowing in a car that’s as long as a Range Rover and as heavy as the moon.

But people don’t buy a Rolls Royce for its dynamics. They buy a Rolls Royce for its impeccable luxury and ride comfort. The ride is as smooth and as stable as advertised but actually firmer than I thought. From my experience, a Range Rover is softer and more comfortable but the Black Badge treatment might bring about a firmer ride. I’d have to test the standard Wraith to determine if there’s a ride difference. Though, while bumps and road imperfections were felt, they made no difference to the Rolls. In no way did anything in the road impede the Wraith’s progress, as it felt as if the big Roller was ironing the bumps out as it felt them, flattening them into the road. And please don’t mistake me, it’s an incredibly comfortable way to travel. It’s also church-quiet inside, even at triple-digit speed (which we never tried, of course).

The real beauty of the Rolls Royce Wraith Black Badge is that it’s a car that has a character of its own. Bentleys are superb and wonderful cars but there’s a whiff of the Volkswagen Group in them. Inside a Rolls, there’s almost no BMW Group. Sure, the iDrive screen is present but it’s hidden beneath Rolls’ housing and features Rolls Royce graphics. Aside from that, there’s nothing to indicate that the big Wraith had any other association with any other brand. It’s the most bespoke feeling car I’ve ever been in and there’s something truly wonderful about that. 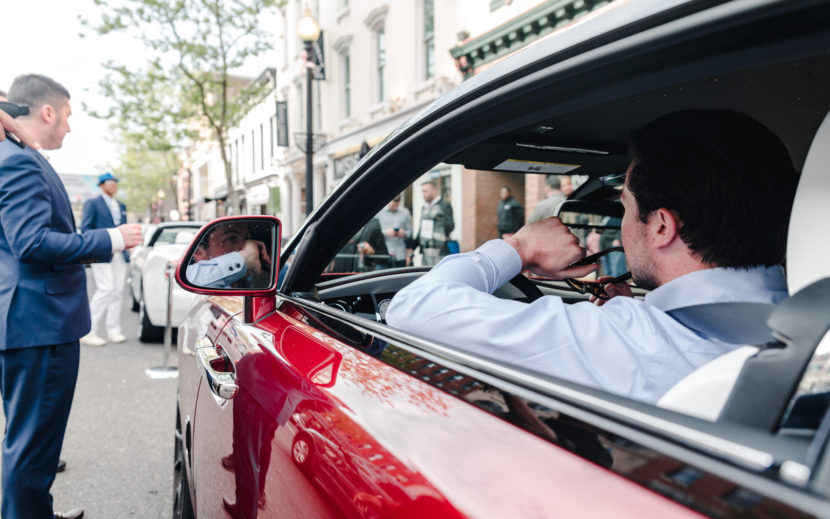 The Wraith feels like it has personality, character. It feels like nothing else on the road. To paraphrase Jeremy Clarkson, Rolls Royces have always been incredibly elegant and luxurious but also a bit vulgar. That’s ever so true in the Wraith Black Badge. Its black chrome accents, angry V12 noise and polarizing looks, along with its luxury and quality beyond anything else, make it seem like it knows its better than you, which it is, while coddling you at the same time.

Rolls Royce doesn’t just offer a driving experience, it offers a lifestyle experience. There’s this feel that you’re in a different world inside a Rolls, especially the Wraith Black Badge. Its character is intoxicating and its driving experience is addictive. For a few brief hours, this car made me feel like one of the most special humans on Earth. I think it’s because the Rolls Royce Wraith Black Badge is one of the most special vehicles on Earth.

The Wraith feels like it has personality, character. It feels like nothing else on the road. I think it's because the Rolls Royce Wraith Black Badge is one of the most special vehicles on Earth.