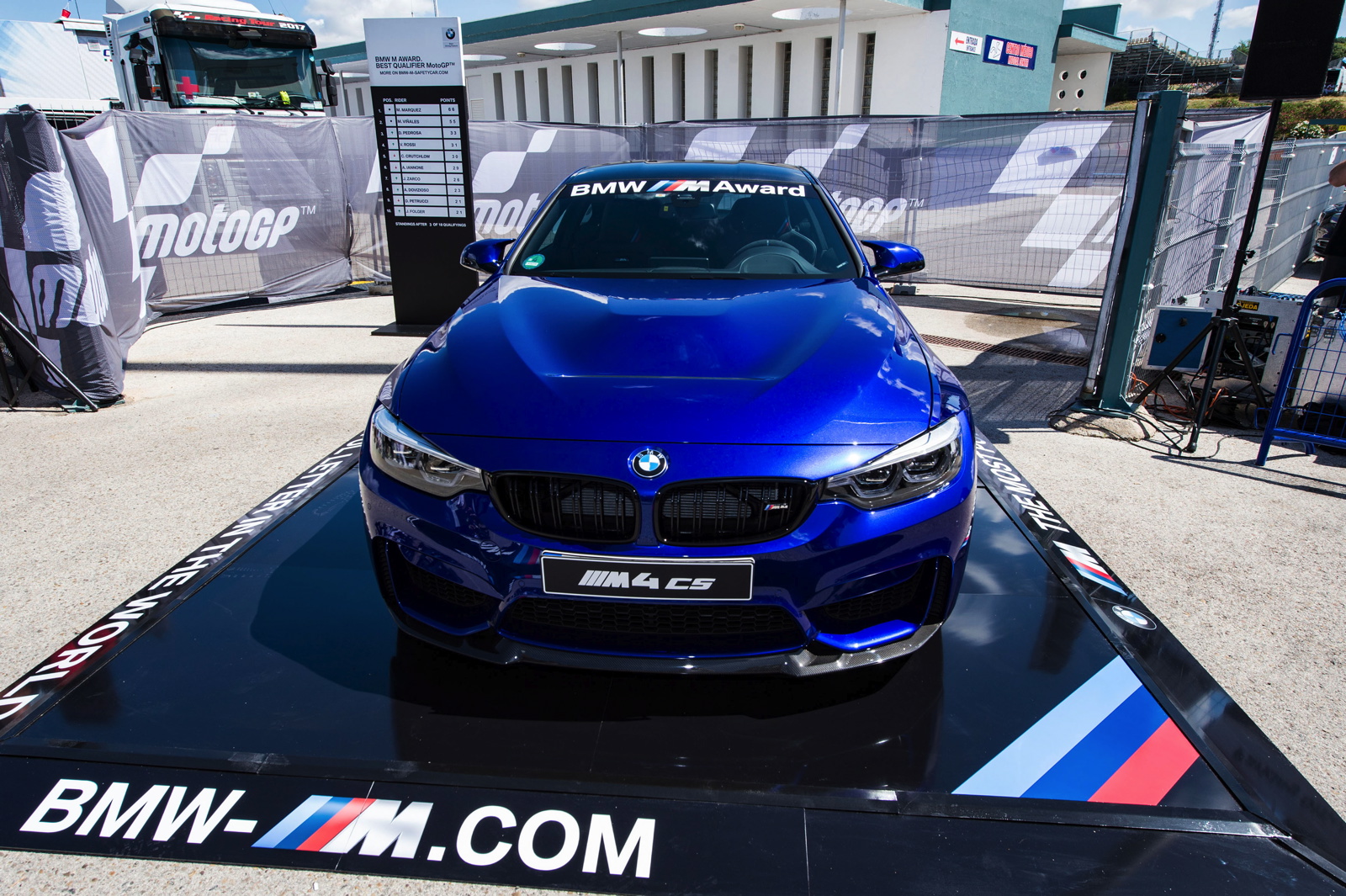 BMW M Division once again presented a real highlight – the prize car for the BMW M Award in 2017: the new BMW M4 CS. The special edition is available as of July 2017 and is set to bring motorsport to the streets, in the proverbial sense. As such, the new BMW M4 CS is the perfect prize car for the fastest qualifier in MotoGP. The BMW M Award is celebrating reaching a minor milestone this season: BMW M Division will present the coveted prize as the long-term partner of MotoGP promoter Dorna Sports for the 15th time. 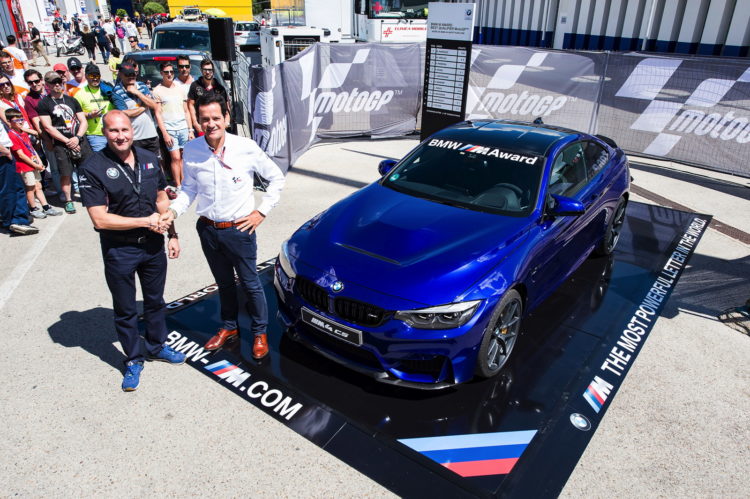 Since 2003, the MotoGP rider with the best qualifying results has been recognised at the end of a season with an exclusive and customised BMW M automobile. The car for the 2017 winner, the new BMW M4 CS in San Marino Blue Metallic, was unveiled today at the Spanish Grand Prix in Jerez de la Frontera.

“The presentation of the prize car for the BMW M Award in Jerez de la Frontera is a MotoGP tradition,” said Pau Serracanta, Managing Director of the Commercial Department at Dorna Sports, at the unveiling. “It is fascinating to see how BMW M Division manages to outdo itself every year. The new BMW M4 CS follows on seamlessly from the fantastic prize cars we have been treated to in previous years. It is a prime example of the technological expertise and innovative spirit, for which we have valued BMW M as a partner for almost two decades.” 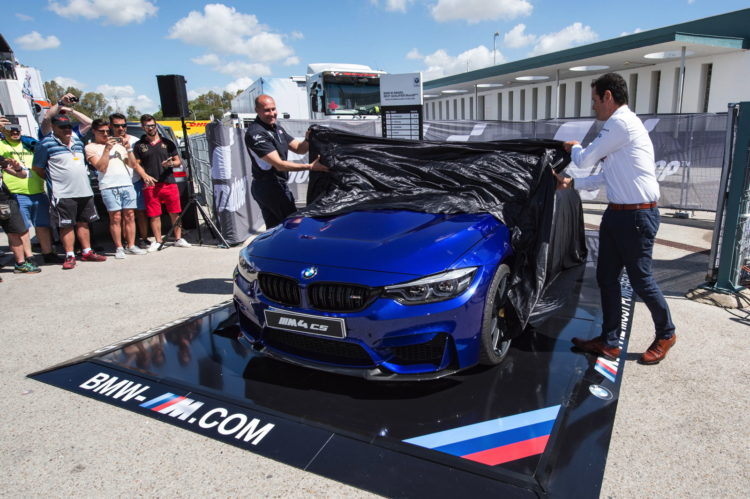 “We are proud to be celebrating a milestone this year with the BMW M Award. The fact that we are presenting the prize for the 15th time goes to show status this award enjoys within the MotoGP family,” said Axel Mittler, Head of Cooperation MotoGP at BMW M Division. “We are delighted to be able to present the latest highlight in our product range as this year’s prize car, in the form of the BMW M4 CS. The BMW M4 CS is an exclusive, limited special edition with a clear focus on dynamics and sportiness. We are confident that it will delight the winner of the BMW M Award. We have our fingers crossed for all the MotoGP riders and look forward to seeing who receives the new BMW M4 CS at the end of the season.” 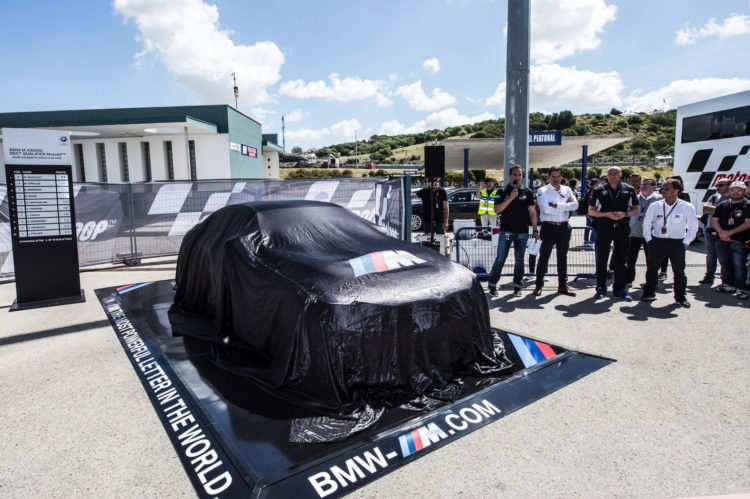 The new BMW M4 CS combines unique motorsport genes with road capability and is the embodiment of pure dynamics. Its powerful M TwinPower Turbo inline six-cylinder engine, which generates 460 hp and 600 Nm of torque, allows outstanding performance across the full range of engine speeds (combined consumption: 8.4 l/100 km; combined CO2 emissions: 197 g/km). A host of other high-performance components contribute to the excellent driving dynamics of the new BMW M4 CS, including the Active M differential, an M double-clutch transmission with Drivelogic and a particularly athletic design for extremely quick changes between the seven gears without losing any time, and Cup tyres.

The consistent use of lightweight materials, both outside and inside, reduces the weight of the car and optimises the throttle response and agility. The exclusive alloy wheels on the BMW M4 CS are inspired by motorsport, while the innovative OLED rear lights are a new design feature. The athletic appearance of the BMW M4 CS continues inside the car – from the lightweight M sport seats in anthracite-coloured Alcantara leather to the M Alcantara steering wheel and many more exquisite details.

The BMW M Award forms a part of BMW M’s long-term commitment as “Official Car of MotoGP”. Just like the points system for the races, riders at each Grand Prix weekend are awarded points relative to their positions in qualifying. The rider with the most points at the end of the season wins the BMW M Award. Marc Márquez is the record holder after winning the BMW M Award four times in a row. After the four qualifying sessions held so far in the current 2017 season, the Spaniard is in the lead again. Valentino Rossi and Casey Stoner both have three BMW M Awards to their name. Jorge Lorenzo has earned the coveted title of top qualifier twice so far. Sete Gibernau and Nicky Hayden have both won once.

The partnership between BMW M Division and Dorna Sports dates back to 1999. At the centre of the activities is the provision of the BMW M fleet. 2017 is BMW M’s 19th season as “Official Car of MotoGP”. This year’s fleet of official MotoGP vehicles includes a total of six different BMW M models. Alongside the BMW M2 MotoGP Safety Car, the BMW M4 Coupé with water injection and the BMW M3 are also in action as safety cars. Two BMW X5 Ms take to the track as medical cars this season. BMW M Division provides the safety officer with a BMW M5. Two BMW S 1000 RRs, which BMW Motorrad provides as safety bikes, complete the 2017 safety car fleet.