We’ve heard quite a lot, in recent months, about the new Alfa Romeo Giulia Quadrifoglio. It’s the car that brings back the rivalry between Alfa and BMW. The Giulia Quadrifoglio is a genuine BMW M3 competitor that should scare the pants off the folks in Munich. With its 503 hp 2.9 liter twin-turbocharged V6, the Quadrifoglio outpowers the M3. It’s also faster to 60 mph, when fitted with its ZF-sourced eight-speed automatic. And, it strikes more on the emotional level, thanks to its stunning good looks and Alfa character. But now, the newest Alfa has another bragging right over the M3 — its Nurburgring lap time.

The fastest BMW M3 to go around the ‘Ring was actually a BMW M4, doing the deed in 7:52. While that’s an impressive time, and a full 13 seconds faster than its predecessor’s, it’s not enough to beat the Alfa Romeo Giulia Quadrifoglio’s. The Italian was able to run the ‘Ring, with its automatic gearbox, in an astonishing 7:32.

That makes it the fastest sedan on sale to lap the famous Green Hell. It beat out the new Porsche Panamera Turbo S by eight seconds. That’s simply mad. Especially so, considering that it’s a four-door sedan with a decent trunk and comfortable suspension. It’s a car you can take your kids to school in quietly and comfortably. Hell, it even has a regular ole automatic gearbox, so it’s nice and easy to drive. But if you feel like embarrassing supercars on the weekends, to needn’t switch cars. Insanity.

Alfa has even been so kind as to document this impressive achievement. The driver of the Alfa during this blistering lap was Fabio Francia and he should be awarded for his bravery, because this does not look easy. In fact, it looks downright terrifying at times. While the Alfa is a damn fast car, it’s still a sedan with relatively soft suspension. So over some of the nastier parts of the Nurburgring, it seems to get a bit sketchy. Francia deserves some sort of award for keeping his resolve in those moments. Oh, and in the video you get to hear that Ferrari-fettled V6, which is magnificent. 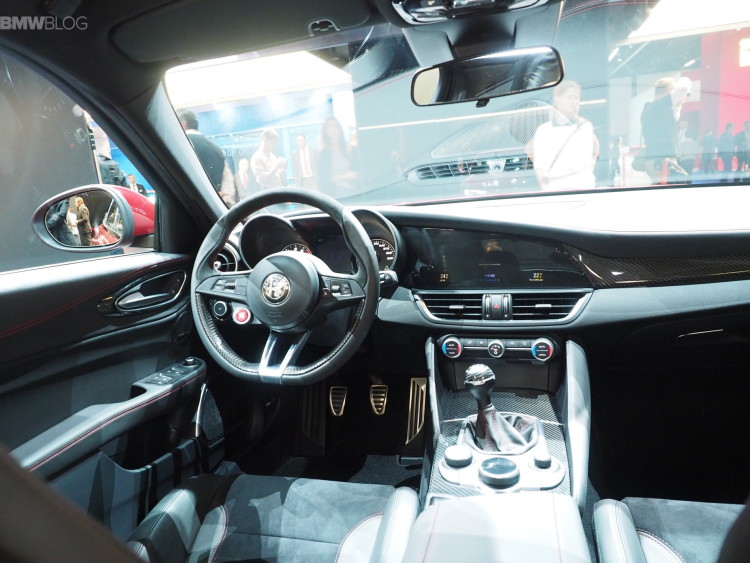 With the Competition Package, I love the M3/M4. It’s a fantastic all-around sports car package. However, I’m not so sure it can manage to keep up with the Alfa Giulia Quadrigoflio, as the latter car is not only faster ’round a track, but it’s also better looking, sounds better and is more exciting. Aside from the frightening reliability concerns from Alfa, it’s going to be tough to not fall victim to its charms, as a buyer. Especially after seeing this video.