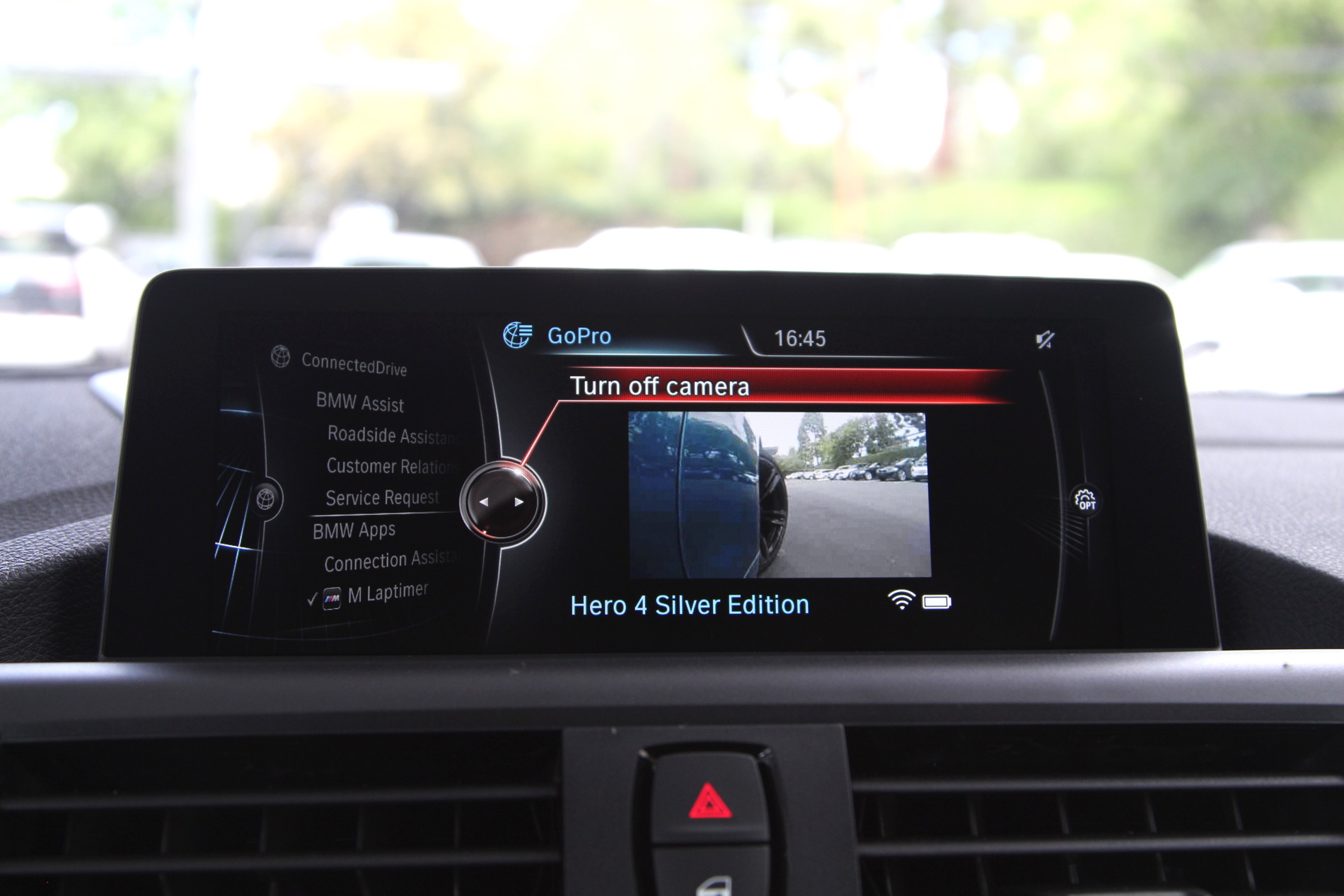 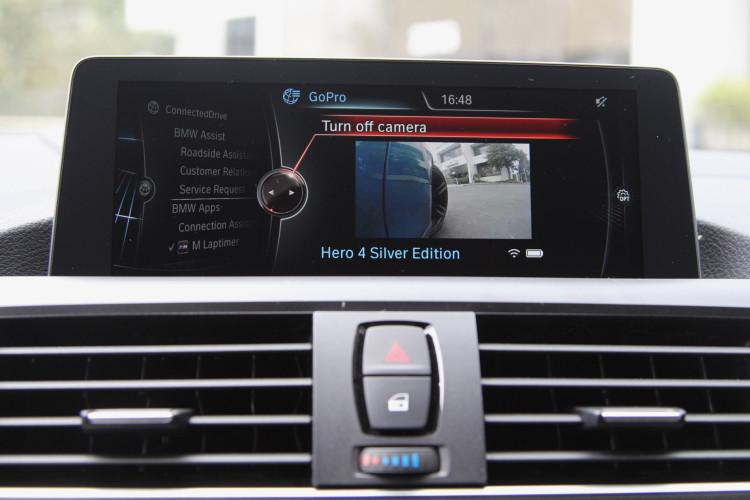 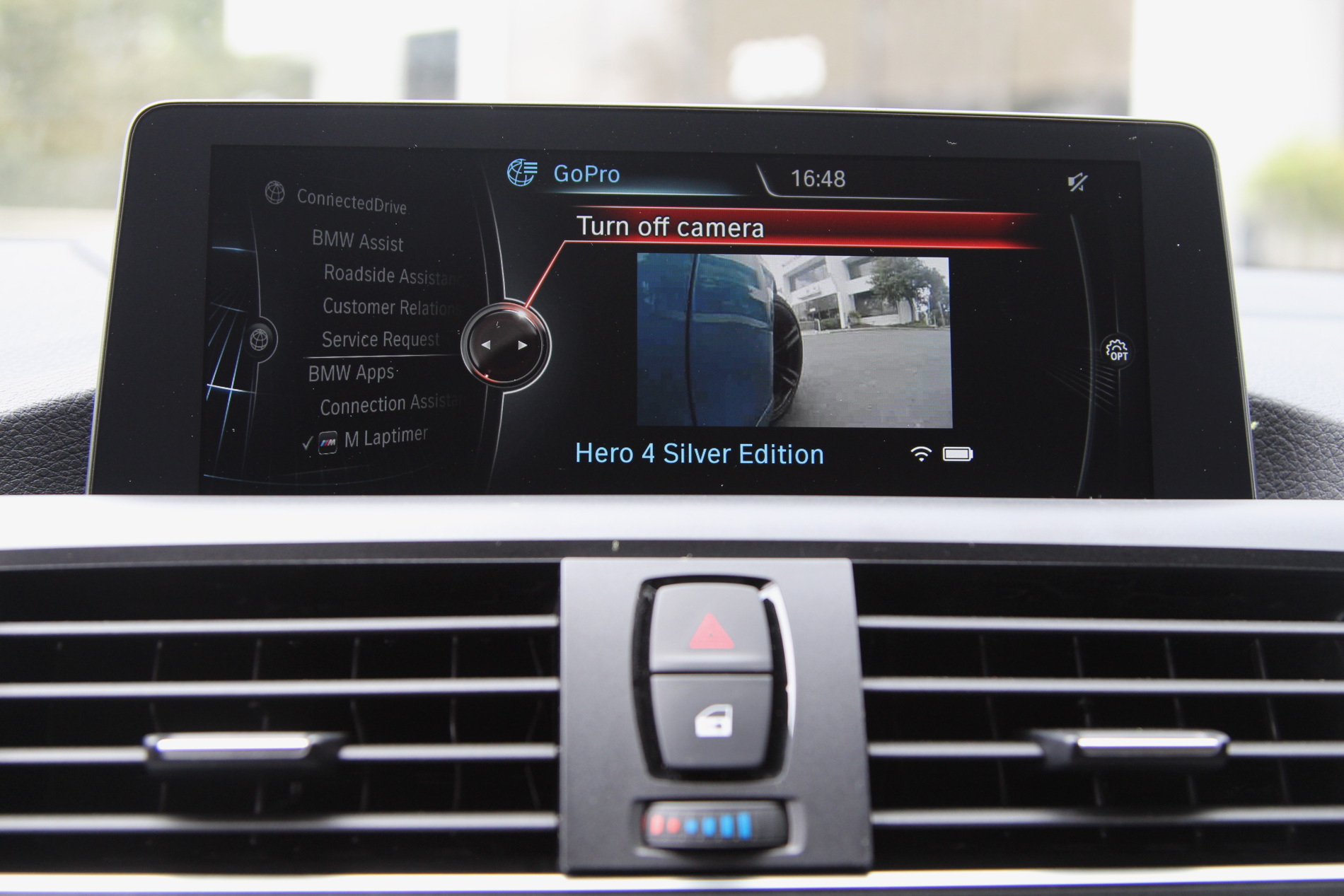 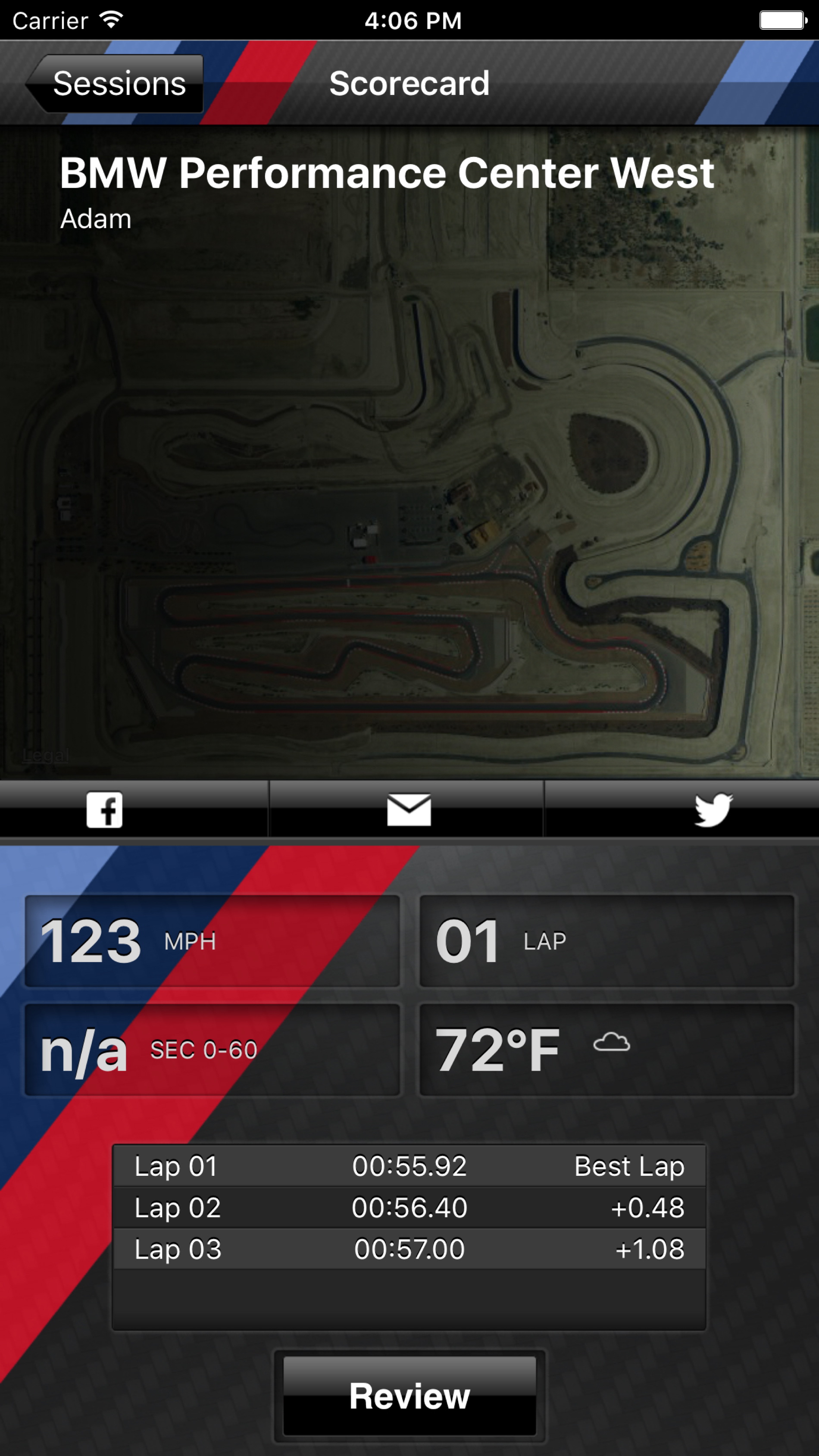 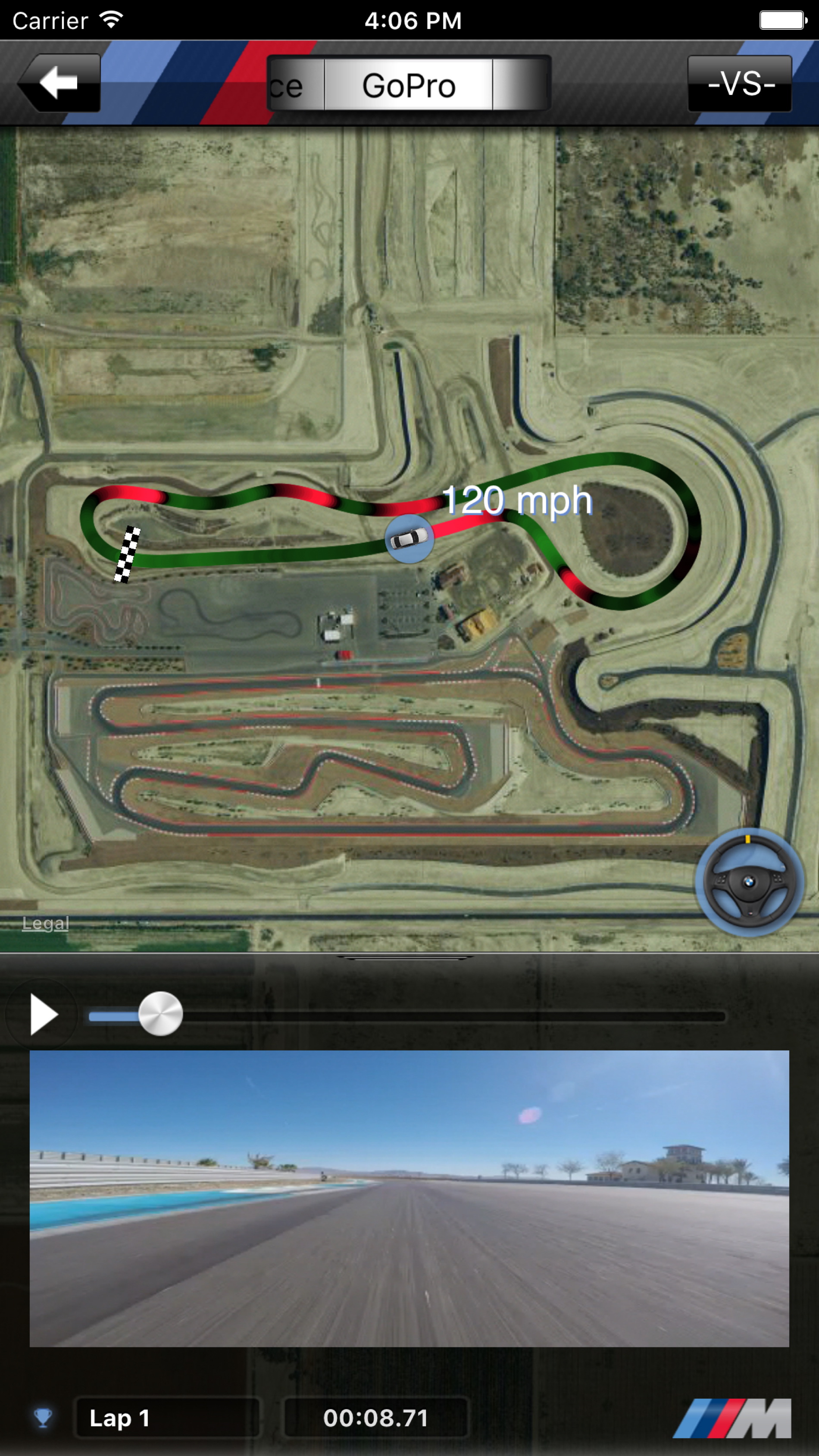 “The BMW M Laptimer and GoPro integrations have both proven to be incredibly popular with driving enthusiasts. From the time that we launched the first in-car integration for a GoPro camera, bringing that integration together with the BMW M Laptimer seemed like the natural way to really enhance the track driving experience,” said Christian Schmid, senior development engineer at the BMW Group Technology Office USA. “This allows us to provide BMW drivers the ability to safely capture and share their track experience.”

Beginning in summer 2016, new downloads and updates of the BMW M Laptimer will include the GoPro integration. When launching the M Laptimer app in the iDrive system, a GoPro tab will appear in the menu. Clicking on that tab will make specific GoPro functions available on the BMW iDrive screen:

For playback within the BMW M Laptimer, users will see a new “GoPro” menu entry. Clicking on that entry will enable the low-res version of the video to be played on the phone below the map view. Playback controls such as pause/play, scrubbing and playback time are displayed above the video image.

“The GoPro and BMW collaboration set a new standard in the category when it launched in 2014,” said Adam Silver, GoPro director of strategic product partnerships. “Since then, BMW has continued to innovate, demonstrating a passion for creating a cutting-edge user experience to enable drivers to capture and share their driving experience.” 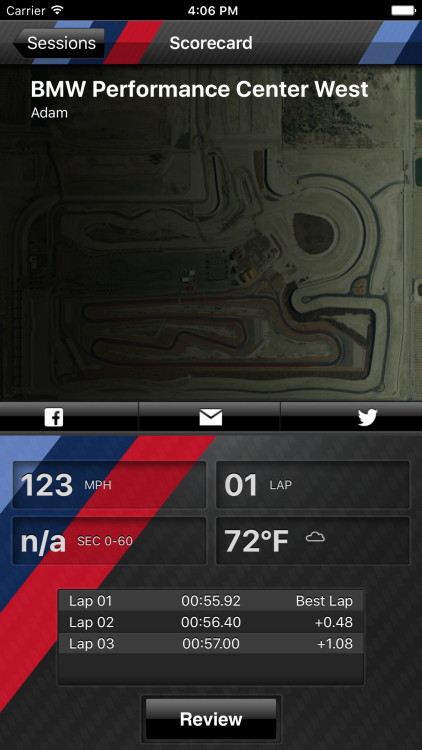 The BMW M Laptimer
Intended for off-road use only, the BMW M Laptimer App records data from a BMW Apps –equipped vehicle’s on-board network and GPS receiver to create comparative track sessions and provide essential performance information. It generates track maps and captures essential driving data including top speed, number of laps, best lap time and ambient temperature. Information is then presented on the scorecard screen when the vehicle is no longer in motion.

The BMW M Laptimer provides highly visual depictions of throttle, speed, brake input, steering angle, engine RPM, fuel level, and g-force.  Users can easily zoom in and out, and rewind or fast forward through track recordings.  BMW M Laptimer will automatically calculate laps and times for the user without the need for pre-installed track map data. The BMW M Laptimer can be used as a training aid to become a faster, safer driver.

A Comparison Mode gives users the ability to view individual or dual runs in real-time.  Users can select their own laps or compare against a lap sent by another BMW driver. Users may also share track day results with friends to compare data.  Additionally, users can post results through social media integration, including Facebook and Twitter.

This groundbreaking connectivity is designed specifically to reduce driver distraction and enhance the capabilities for which “The Ultimate Driving Machine®” and GoPro are famous. In addition to framing the shot using BMW’s large central screen, users may quickly choose between six pre-set camera modes: Leisure Drive Facing Out, Night Driving, Sport Drive Facing Out, Drive Camera Facing In, Winding Road Time-lapse, and Straight Road Time-lapse. The camera’s RECORD function may be started and stopped by the driver at will, and vital camera status indicators are displayed, including recording elapsed time, battery life, and Wi-Fi signal strength. The user may also toggle the camera’s SLEEP mode to prolong battery life between shots.

The user’s vehicle must be equipped with BMW Apps. Next, the user’s Wi-Fi-equipped GoPro camera (HERO3 and later) communicates with the GoPro App installed on the driver’s iPhone 4S or later, which must be connected to the vehicle either through the iPhone USB cable or the BMW Accessory snap-in adaptor for iPhone. The driver will access the App through the BMW ConnectedDrive menu, which is displayed on the large, trans-reflective central screen (up to 10.2 inches, depending on model).

The BMW Group Technology Office USA designed the on-board operating menu to streamline the camera’s operation and take full advantage of the integrated environment. Menu choices appear to the left of the screen, and the camera’s actual field of view is displayed in near real-time while the vehicle is stationary.