I reached out to Jeremy Desel, Director of Communications for EVgo, to discuss the deployment rate of the 500 ChargeNow DC Fast stations. What Desel told me was pretty impressive:

“We have been able to add nearly 100 additional 50kW DC Fast Combo chargers in six weeks, in 25 markets.”

EVgo certainly didn’t waste any time, and began installing Combo stations immediately after the announcement of the partnership with BMW for ChargeNow DC Fast. That’s good news for the i3 (and all Combo) owners who have been patiently waiting for Combo (CCS) infrastructure to proliferate. Speaking with Desel he told me they are able to move quickly because EVgo had the foresight to future proof EVgo DC Fast charge sites. When these sites were initially built, they were designed to be easily upgraded and expanded. That fact will certainly help EVgo meet the 2018 completion date to get all 500 Combo stations in the ChargeNow DC Fast program installed on time. EVgo currently has 104 Combo DC Fast Charge stations operational in California, the result of the initial phase of the ChargeNow DC Fast program which began in 2014.

One aspect of the ChargeNow DC Fast expansion program which wasn’t discussed in part one was the fact that new BMW i3 buyers will have unlimited free access to this network for two years. To qualify, you need to buy or lease an i3 on or after November 1st, 2015. If you bought or leased your i3 before that, you do not qualify and will have to pay the current rates for access to EVgo’s DC fast charge network. That didn’t sit well with many current i3 owners, and some expressed their dissatisfaction to it. I wanted to get an idea of how the i3 community felt about this so I ran a poll in the BMW i3 FaceBook Group. Sixty percent (109 of 181) of respondents said they weren’t happy with it, and felt BMW should allow all i3 owners free access to the network for two years, not just new owners. 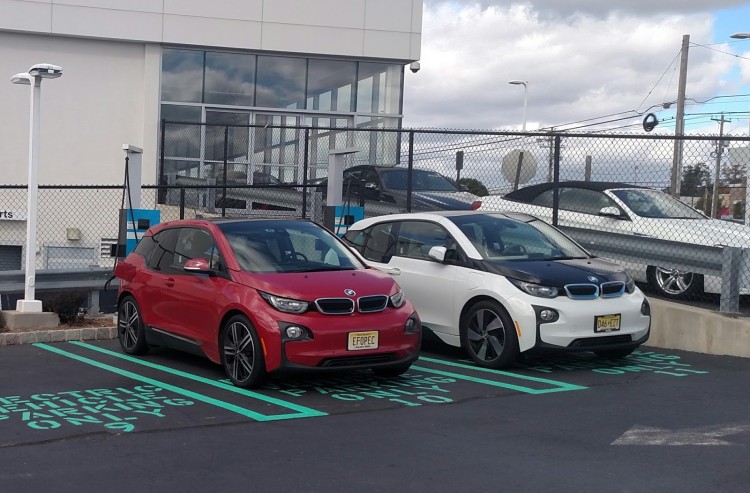 Personally, I’m not a fan of offering this kind of unlimited free DC Fast charge access as a purchase incentive. Nissan announced a similar plan for new LEAF buyers called “No Charge to Charge” back in 2013. I believe it promotes abuse, and in many instances will be counter productive as stations will be unnecessarily overused simply because they are free. Even Tesla is having issues with unnecessary Supercharger use. They recently sent out letters urging Model S owners to only use the Superchargers when they need to for long journeys. Free, unlimited use will result in i3 owners plugging into DC Fast charge stations within close proximity to their homes, and those stations then won’t be available to the drivers who actually need them to complete a long journey.  I’d much prefer to see BMW offer i3 owners a discounted rate, or a limited number of free sessions as a purchase incentive. This free promotion is clearly a marketing tool that BMW plans to use to attract new i3 customers, and I don’t think it went unnoticed that many current i3 owners weren’t happy with it. Although I couldn’t get any comment on this, I got the feeling that BMW may be working on something they can offer to current i3 drivers, as well as i8 and eDrive owners, so stay tuned.

Another topic we discussed is the fact that many current EVgo Station locations don’t support the Combo connector that BMW uses. The competing DC Fast Charge system, CHAdeMO, which is used by the Asian manufacturers, had about a three year head start getting established in the US before any Combo (CCS) stations were installed. Because of that, there are a lot of EVgo Station locations which are CHAdeMO DC fast charge units. I wanted to know if those locations would remain CHAdeMO only, or if they would be upgraded to support the Combo connector also. To that Fietzek said:

“Where there is currently a EVgo Station that is only CHAdeMO, they will either swap that station to a dual-connector unit which supports the Combo also, or install a second station which is Combo. When we are done with this project in 2018 there will no longer be any EVgo Station locations which only support CHAdeMO, they will also Combo.”

The Future: Better, faster and widespread 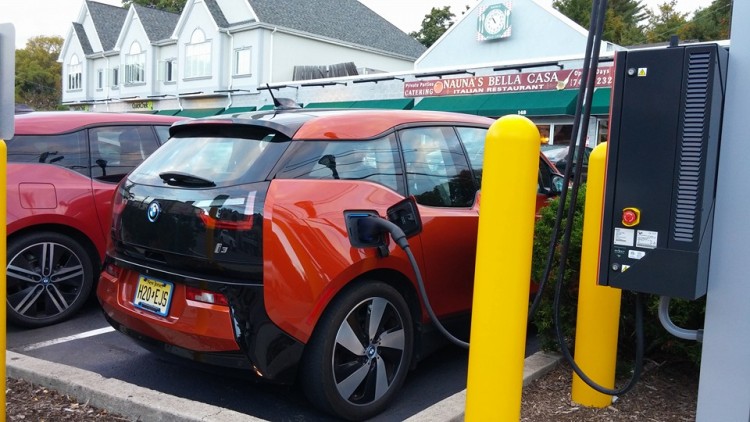 I then turned the conversation to the future of EV charging, and asked the group to comment on what’s next for BMW. I specifically pointed to Audi’s announcement with regards to their electric vehicle plans, and the fact that Audi’s press conference had just taken place where they said the 2018 eTron Quattro would support 150kW charging. Audi also promised to offer “Access to Nationwide Network of 150kW charging stations” and that these stations would begin to be available when the vehicle is offered for sale in 2018. 150kW DC Fast charging is a huge step forward compared to the 24 kW and 50 kW DC Fast charging stations which BMW and their partners are currently deploying. So I asked if BMW is going to be able to keep up with the competition.

Healey started out talking about how quickly the landscape of electric vehicle charging has advanced. Back in the days of the MINI-E, Healey was the MINI-E technical coordinator. I got to know him then as I was one of the MINI-E lessees and he was in charge of keeping the fleet on the road. He added: “You’ve been with us from the beginning, Tom. If you step back just a few years you’ll remember how we struggled just to get the wallboxes installed in the MINI-E customer’s garages. So for a while there we mostly focused on level 2 charging. Then came the 24kW and 50kW DC fast charging which we are currently deploying, and now we’re already working on charging at much higher speeds. So if you really think about it, we’ve actually advanced a lot in a 5 to 6 year time frame. This is the natural progression; to continue to introduce faster levels of charging, but we can’t sit and wait. We need to install what we have available to us now. We can’t underestimate the other side of public infrastructure; the psychological aspect. We need to get the chargers out there, they need to be seen. This is not only important for current EV drivers, but for potential EV owners. They want to see the infrastructure before they buy the car. We’ll continue to upgrade the infrastructure as better options become available.”

Fietzek then offered the following:

“Yes, we have seen some announcements from other OEMs at the show here today. We are currently working with the other OEMs on increasing the charging standard to 150kW and higher. (Here Fietzek is referring to The Charging Interface Initiative association – CharIN) Once we have defined the new charging level we need to then determine the best way to implement it. We have already shown 150kW charging at Baden Baden, and together with the other German OEMs we are working on defining the standard and determine the costs. We are also supporting an EVgo CPUC program here in California to demonstrate new 150kW high-powered charging. Part of our commitment is to provide test cars to test these station as well as technology. So yes, we are working on it, but we don’t have any news as far as when or which cars will use this technology just yet.”

Speaking of partnering with other OEM’s in infrastructure projects Healey said:

“BMW is open and willing to work with all industry stakeholders that are committed to supporting EV infrastructure projects. The partnership programs that we have launched have afforded us a wealth of knowledge and lessons learned that we will continue to share and apply to the expansion of the US charging infrastructure to benefit our current and future customers. The old adage ‘A rising tide lifts all boats’ is especially appropriate with EV infrastructure. Working together will only expedite our goal of making electric mobility more accessible and appealing to even more drivers.”

Finally, one cumbersome aspect of public charging is that we don’t really have network interoperability. It’s kind of been a bit like the Wild, Wild, West out there the past five years with many different network providers offering many different types of EV charging equipment, and very little cooperation amongst all of the various stakeholders. An EV driver may have to carry four or five different network cards, pay an annual or monthly fee for some of them, pay for replacement cards and make sure you have all of them with you because you never know when you’ll need one. Having true network interoperability would be so much more convenient. Well, it looks like we may have taken the first real step in that direction.

BMW and Nissan, joined network providers ChargePoint, EVgo and Car Charging Group as the five founding partners of ROEV, which stands for “roaming for EV charging.”  In addition to the founding partners, several more companies have joined ROEV, including Audi, Honda, Efacec, Portland General Electric, SemaConnect, and BTC Power. They are still a couple of months away from officially launching the program, but once that’s happened, a BMW customer will be able to use their ChargeNow card, or any participating network RFID card, to access any charging station operated by the participating networks. What isn’t clear yet is whether or not using a card from one network to access another network’s charging station will result in an additional fee, like roaming fees on mobile phones. And since the name of this new enterprise included the word “roaming,” I’m guessing there will be some kind of roaming fee to access stations from competing networks. The good news is that the three founding partner networks, ChargePoint, Car Charging Group/Blink and EVgo currently operate 17,500 of the 19,000 (91%) public charging stations in the US, so interoperability among these three giant networks alone is a huge step forward.

Speaking of BMW’s participation in ROEV, Ghoreishian said, “As much as it sometimes may not seem like it, we are indeed listening to what our customers are saying and constantly working to make things better. The goal with ROEV is to improve the experience of owning an EV. We’ve heard our customers complain about needing multiple network cards, and we feel ROEV’s network interoperability will enhance the electric vehicle ownership experience.”

This of course is all good news. With Tesla not showing any signs of slowing down in their relentless pursuit to install Supercharger infrastructure, the CHAdeMO Association continuing to expand their worldwide network and now the Combo (CCS) standard beginning to really proliferate, all EV drivers will benefit in the long run. Getting the infrastructure in the ground is the most important and most difficult thing. In my opinion, at some point in the future there will be a single winner in the “connector wars” and it may not even be one of the existing “standards” used today. When that’s decided, it will be easy to just swap out the connectors on the stations to whatever standard is the ultimate winner. For now we really just need to continue to get the infrastructure in the ground and the problem of which standard wins will eventually work itself out.