BMW ConnectedDrive at the IFA 2015 consumer electronics show in Berlin 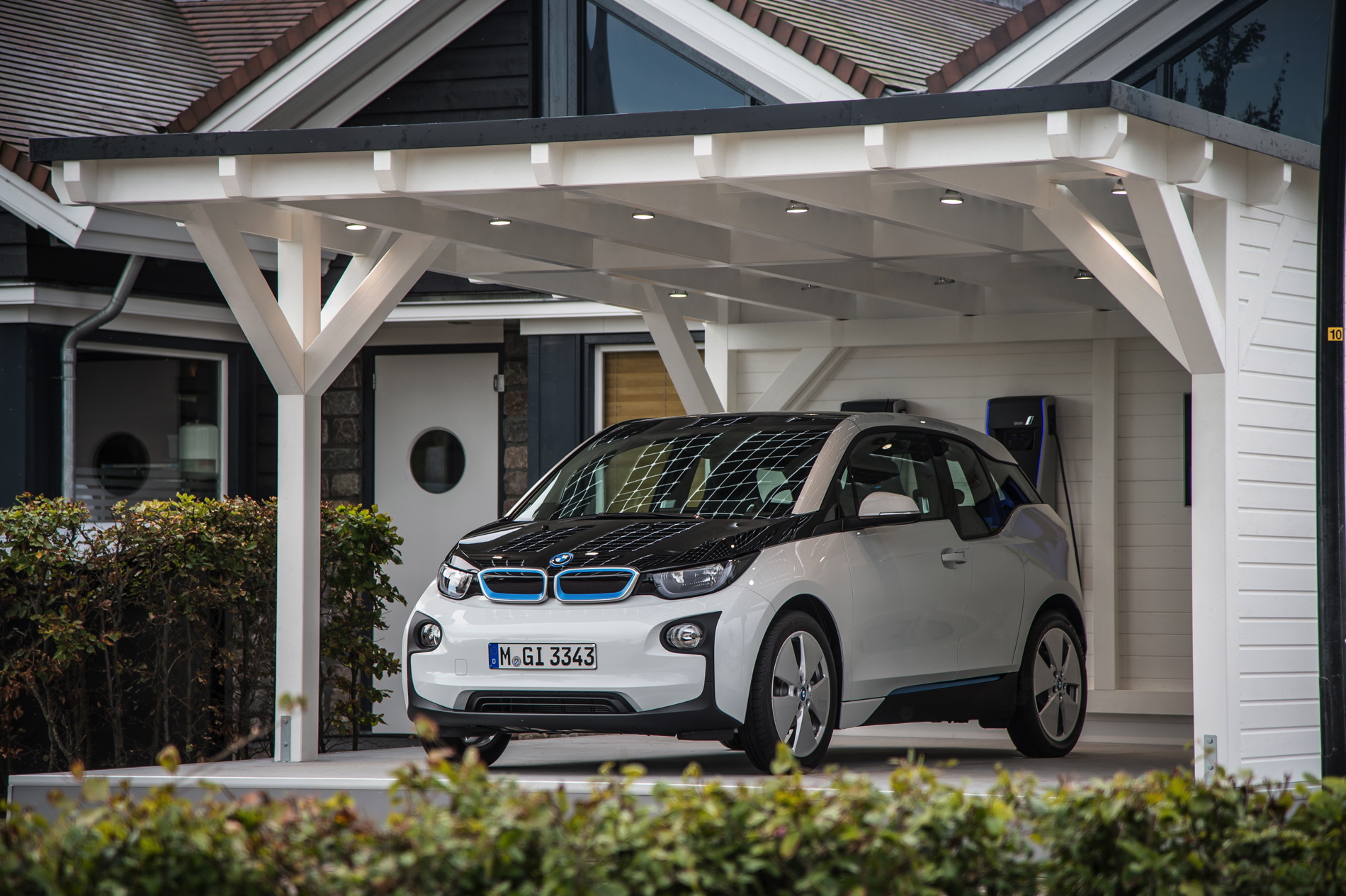 BMW is indisputably one of the world’s leading automotive manufacturers when it comes to linking up drivers, their vehicles and the outside world. The company groups together its range of intelligent services under the BMW ConnectedDrive banner. And at the IFA 2015 show in Berlin (4–9 September 2015), one of the world’s leading consumer electronics and home appliance fairs, BMW is showcasing new solutions for the “connected car”.

One of the company’s focal points at the IFA are a pair of apps designed for operating functions inside connected houses. The Smart Home app from Deutsche Telekom is an Apple iOS-based application which can be integrated into a BMW i3 or any other BMW vehicle with BMW ConnectedDrive Services – as can the Samsung SmartThings app developed for Android devices, on display at the IFA 2015 as a research application.

BMW is giving both apps their in-car world premiere, underlining its flexibility in linking applications for the two leading mobile operating systems seamlessly with its cars. Both Smart Home apps allow users to control in-building functions, such as heating, from a car. Users can check whether windows and doors are locked or the burglar alarm is activated while on the move. Users get notified on their car’s dashboard about water leaks or intruder alerts via the integration. Like the extended news app from n-tv – another new arrival – these apps for connected houses can be operated using the iDrive Controller and viewed on the Control Display.

The GoPro app for operating the brand’s small and robust cameras can also be operated from inside a BMW and is on show at the GoPro Stand (Hall 3.2/201).

Holders and attachment systems designed specially for BMW vehicles are available for GoPro cameras from the Original BMW Accessories range, and enable perfect shots and videos even in extreme driving situations, e.g. on race tracks.

The impressive speed with which BMW creates intelligent solutions in response to innovations in the entertainment industry is also accentuated by the use of the new Samsung Galaxy Gear S2 smartwatch to operate BMW i3 functions. Users can monitor their car’s battery charge or view its operating range from their wrist. The innovative BMW i3 and BMW i8 can be driven virtually at the Samsung Stand (CityCube, Hall B/101). The Samsung Gear VR Innovator Edition for S6 data glasses provides astonishingly realistic driving impressions with the premium electric model and innovative plug-in hybrid sports car.

BMW interface opens up access to a huge range of apps.

BMW has been ahead of the game in enabling new and innovative third-party apps to be integrated into cars via an intelligent interface. To this end, BMW ConnectedDrive offers its own A4A (Apps for Automotive) interface, an in-house development which allows both current and future models to be upgraded with the latest applications at any time. This gives all BMW models a high degree of flexibility and ensures they keep pace with future developments. Underpinning this capability is ConnectedDrive Services, which provides extensive vehicle connectivity and enables access to services such as Online Entertainment, the internet and Real Time Traffic Information (RTTI).

Smart Home apps, operated from a BMW i3.

At last year’s IFA show, BMW used a research application to demonstrate how functions inside a building can be operated form a vehicle. And this year at the Deutsche Telekom stand (Hall 21a/101), BMW is presenting the integration of the customer-ready Smart Home app now available from the Apple app Store for devices running the Apple iOS operating system. Once an Apple iPhone with the app installed is connected to the car via a USB interface or snap-in adapter, the iDrive Controller can be used to activate electrical devices in connected houses or to switch on lights. These functions can also be automated.

For example, certain settings inside the house – such as room temperature – can be activated automatically when the address is entered into the navigation system. This is not only convenient, it also helps to restrict energy use to those times when it is actually required. Users can check on the Control Display if the house doors are locked or the burglar alarm is activated.

At the Samsung stand, another Smart Home application – the SmartThings app research application – is integrated into the BMW i3. It also allows functions in connected houses, such as automatically ensuring your doors are locked and temperature is adjusted as you drive away from the house. The depth of BMW ConnectDrive app and the ease of integrating it into the SmartThings platform deliver the connected car experience to both Android and iOS users. The ability to integrate smartphones running the two major operating systems for mobile devices into cars quickly and seamlessly underlines the depth of capability behind BMW ConnectedDrive.

BMW i Remote app for the Samsung Galaxy Gear S2 celebrates its premiere.
The BMW i3 and BMW i8 use an integrated SIM card to provide extensive connectivity between drivers, their vehicles and the outside world. This SIM card allows users to request and operate remote functions first revealed with the presentation of the BMW i3 using the BMW i Remote smartphone app. At the IFA 2014, BMW presented the BMW i Remote app for the Samsung Galaxy Gear smartwatch as a world first. This allows the charge level of the batteries to be checked and the car’s operating range to be displayed for the first time in this way. The car’s navigation function could also be operated using the Samsung Galaxy Gear for the first time. Intermodal route guidance for BMW i cars – which incorporates public transport such as buses or trains into efficient route guidance, e.g. during stop-start traffic – is also supported.

A research application presented at Samsung’s IFA 2015 stand sees a BMW i3 linked up to the latest generation of Samsung smartwatches via the BMW i Remote app. The Samsung Galaxy Gear S2 runs the latest version of the Android operating system. Users wearing the smartwatch on their wrist can access important vehicle functions such as battery charge or the car’s operating range without having to take out a synced mobile phone. In so doing, the new Samsung smartwatch establishes itself as an additional medium for real-time information sharing between the driver and vehicle. And users don’t have to take their smartphone out of their pocket, unlock a screen or enter a code to make it happen.

The new n-tv app: quick, well-informed and comprehensive news.
n-tv is Germany’s first news channel and specialises in delivering round-the-clock reports from the worlds of politics, business, sport and society. Up-to-the-minute stock market updates are a recognised focal point of n-tv- reporting. The n-tv editors already offered a special compact news service via the channel’s smartphone app (available free of charge from the Apple App Store) in the form of audio files. The news items are read by a professional newsreader and provide a summary of the most important developments at any given time. But now the new n-tv app gives users access to the news in full. The app is integrated into a BMW i3 at the n-tv stand in Hall 6.2 B, and the news is played back through the car’s audio system.

Like all other smartphone apps available in BMW cars, the n-tv app is a BMW-certified application developed for the integration of smartphone apps as part of the BMW partnership programme. It can be accessed as soon as the user’s smartphone is connected to their car via snap-in adapter or USB cable. The app can be selected from the BMW ConnectedDrive menu, viewed on the Control Display and operated using the iDrive Controller.

Attachment systems for GoPro cameras.
GoPro cameras are compact, robust make it very easy to capture immersive photo and video content. The rugged cameras have become a widely adopted solution for people to capture themselves engaged in their interests, whatever they may be. With the free GoPro app for the iPhone, Android and Windows smartphones , users can control their GoPro cameras intuitively from a smartphone. For example, options such as video, recording mode or photo burst can be selected. BMW ConnectedDrive and the GoPro app also allow the cameras to be operated using the iDrive Controller in a BMW and images to be viewed on the Control Display. At the GoPro stand at the IFA 2015, a BMW M6 MotoGP Safety Car is used to present solutions for mounting cameras to a BMW to best possible effect with the help of Original BMW Accessories. The M Performance Track Fix holds the camera to the outside of the body, while interior mountings from the Travel & Comfort System ensure flawless shots even when the car is being driven at its dynamic limits – e.g. on the race track.