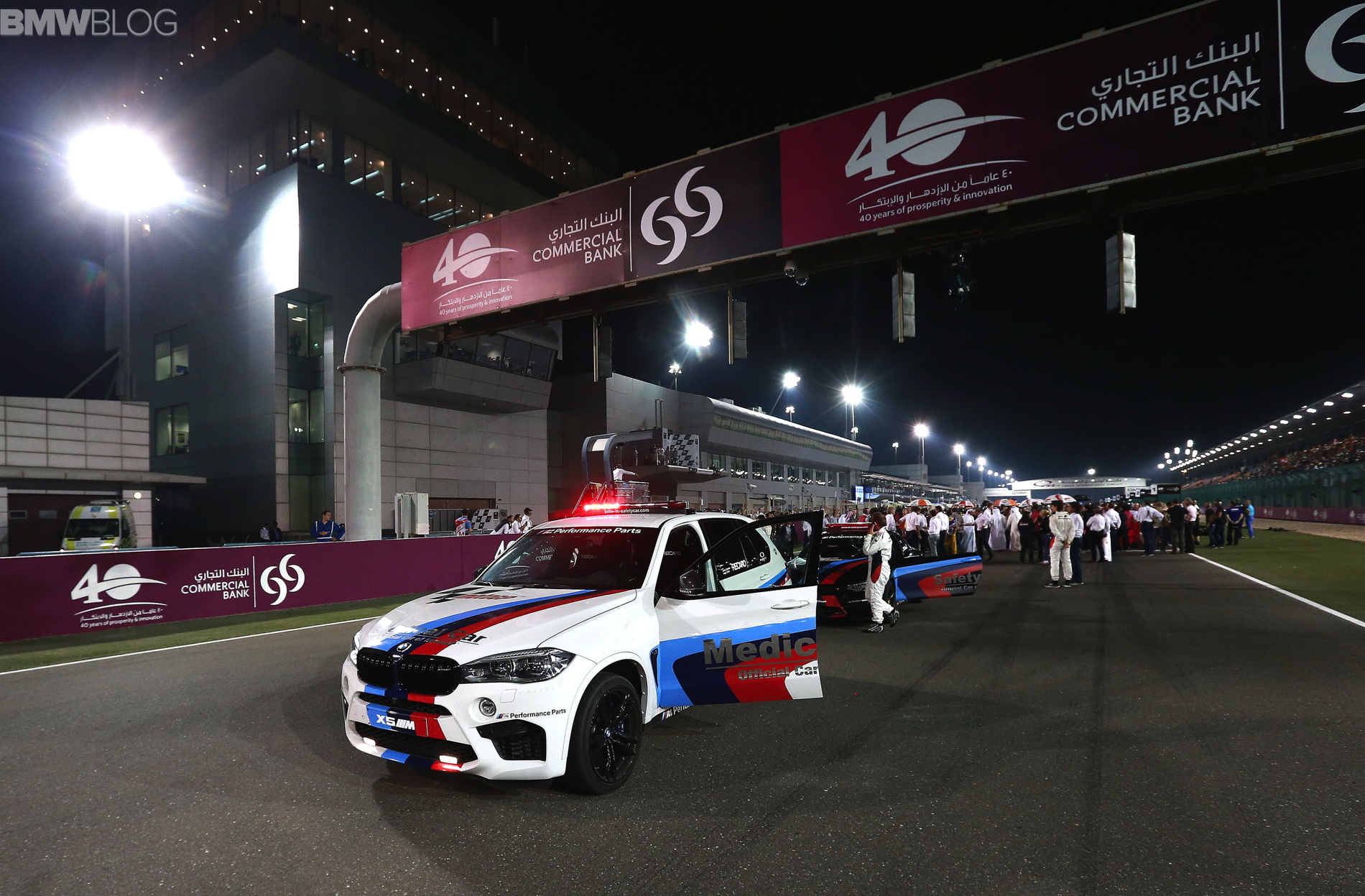 The opening round of the 2015 MotoGP World Championship in Qatar marked the start of a 17th season as “Official Car of MotoGP” for BMW M. BMW has been involved in MotoGP since 1999 and provides the official fleet of vehicles. BMW M Division’s commitment also incorporates many other activities, including the presentation of the coveted BMW M Award.

As a long-term partner of MotoGP organiser Dorna Sports, BMW M Division is once again introducing a number of new features this season. These include a technical innovation: at the Qatar Grand Prix, at the “Losail International Circuit”, the BMW M4 MotoGP Safety Car took to the track with innovative water injection for the first time. With this new technology, the engineers at BMW M Division have achieved a tangible boost in performance from the high-performance engine of the BMW M4 Coupé (431 bhp/317 kW in the production version, combined fuel consumption of 8.8-8.3 l/100 km, combined CO2 emissions of 204-194 g/km). This is due to the fact that water injection makes it possible to raise the upper performance limits, which have otherwise been restricted thermally. Following intense testing within the MotoGP World Championship, the water injection system will also be employed in a BMW M production model in the near future. 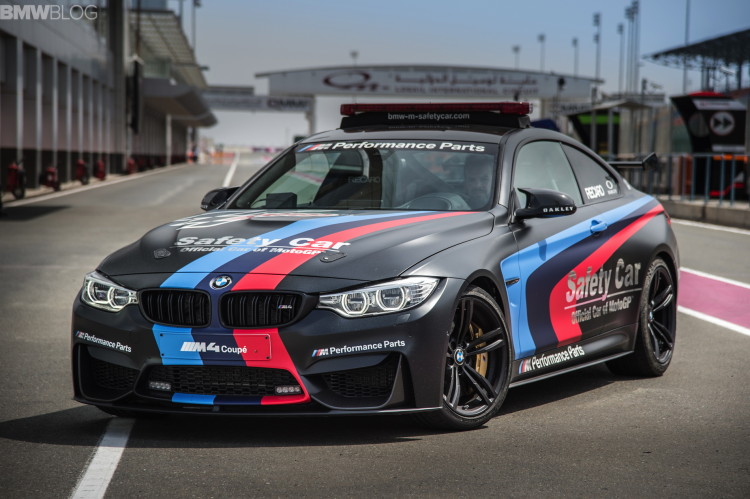 “Millions of fans around the world are captivated by MotoGP. Therefore, it provides us with an outstanding opportunity to present our brand, technology and products to an international audience that is enthusiastic about racing,” said Frank van Meel, President of BMW M Division. “BMW M has always been synonymous with technological innovations, and we are delighted to be able to present the innovative water injection as another new highlight this year. When it comes to leading a field of high-performance racing prototypes safely in any conditions, technology gleaned from the world of motorsport and innovative ideas are indispensable. That is precisely why BMW M is the ‘most powerful letter in the world’. The new water injection is just one example of this. The 2015 season marks the 17th year of BMW M as ‘Official Car of MotoGP’. The successful cooperation with Dorna Sports has grown consistently over the years and is set to continue in the long term. In 2019 we will celebrate the 20th anniversary of BMW M in MotoGP. We are proud of this partnership, which spans decades and is extremely rare in international high-performance sport.” 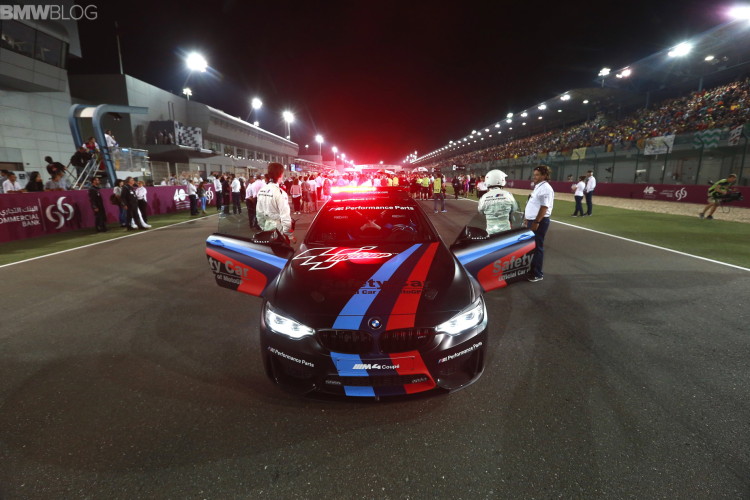 The new water injection sees the engineers make use of the water’s physical effect during the vaporisation process to extract the energy required from the environmental medium. Water is injected into the intake module’s collector as a fine spray, thus significantly cooling the exhaust air during vaporisation. This lowers the discharge temperature in the combustion changer and thus reduces the tendency for knocking. The turbo engine can thus be operated with a higher charging pressure and an earlier ignition point. The lower process temperatures also reduce the formation of hazardous substances, in particular nitrogen oxide (NOX). This way, the innovative technology increases performance and torque, while at the same time ensuring outstanding consumption and emission figures. 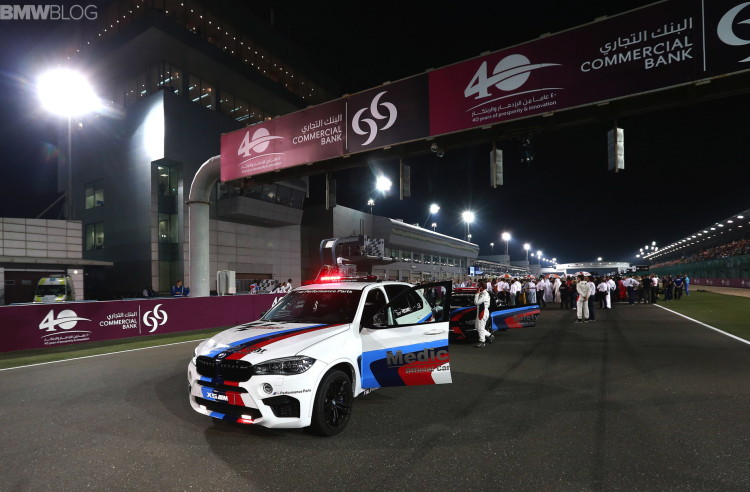 Another highlight of the MotoGP Safety Car fleet is the new BMW X5 M, which makes its debut as the Medical Car this season. With the new BMW X5 M (575 PS/423 kW; combined fuel consumption: 11.1 l/100 km; combined CO2 emissions: 258 g/km), BMW M Division is once again setting benchmarks in the sector for high-performance Sports Activity Vehicles (SAV) and Sports Activity Coupés (SAC). It combines the characteristic features of the successful BMW X family – exclusivity, robustness, agility and road capability – with the high-performance approach typical of M. As with all the vehicles in the Safety Car fleet, the BMW X5 M was prepared for its outings as MotoGP Medical Car in the BMW M factory.

In total, the fleet of official MotoGP vehicles comprises six BMW M and M Performance models. As well as the BMW M4 Coupé, the BMW M3 and BMW M6 Gran Coupé are also employed as Safety Cars. A BMW M5 is available for the Safety Officer, while the new BMW X5 M and the BMW M550d xDrive Touring are used as Medical Cars. BMW Motorrad also provides two BMW S 1000 RRs as Safety Bikes. You can find more information on the 2015 Safety Car fleet online at: www.bmw-m-safetycar.com

Among the many other activities that make up BMW M Division’s commitment to MotoGP is the BMW M Award, which will be presented for the 13th time in 2015. This award is presented at the end of each MotoGP season to the rider with the best overall result in qualifying. The winner receives an exclusive BMW M automobile. The BMW M MotoGP Experience sees guests of BMW M Division experience an unforgettable race weekend. They are given an exclusive glimpse behind the scenes by BMW M MotoGP experts Loris Capirossi and Alex Hofmann. Furthermore, BMW M Division also presents its latest high-performance automobiles and other models of car from the various brands within the BMW Group on Grand Prix weekends.