BMW EfficientDynamics – Building On a Tradition of Engineering

Home » BMW EfficientDynamics – Building On a Tradition of Engineering 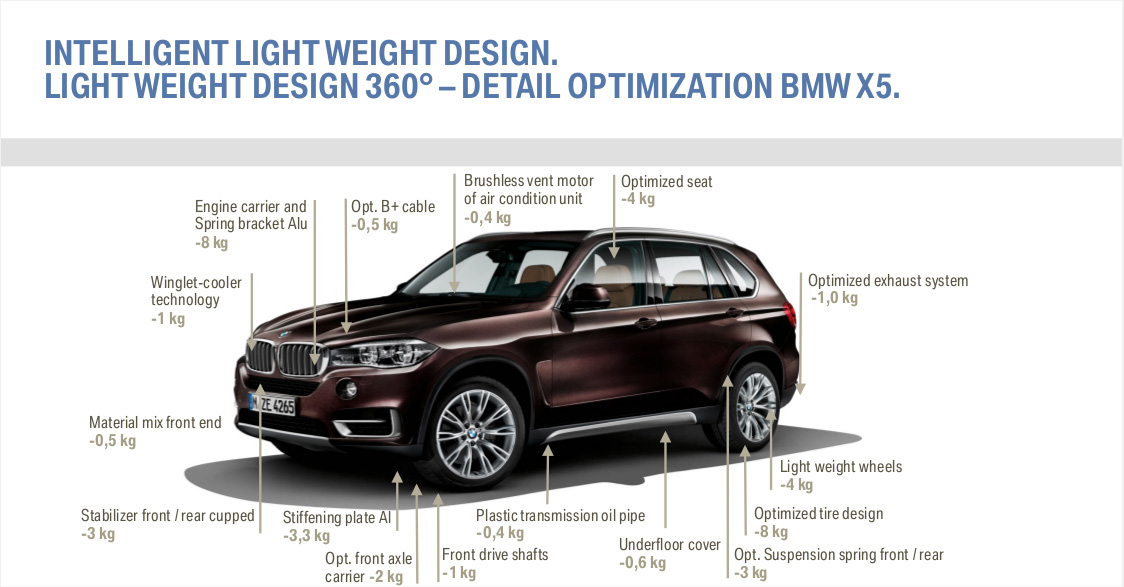 Friedrichshafen, Germany – There is a museum highlighting excellent examples of aerodynamics and lightweight construction on the shore of the Bodensee. Friedrichshafen was the home of the Graf Zeppelin’s airship factory established at the end of the 19th century. And the museum is dedicated to the work of Luftschiffbau Zeppelin and its founder Ferdinand Graf von Zeppelin.

The lessons learned from the pioneering work accomplished by aerodynamicists and engineers used for aircraft construction are as applicable as ever. The advances in computational capabilities and materials, that BMW demonstrated during the Innovation Day 2014, have helped further refine the principles laid down over a century ago.

The Impact of Managing Aerodynamics

Air flows more smoothly around the teardrop shape which allows it to operate in the air more efficiently.

In a demonstration at the Zeppelin museum, four shapes are subjected to an airflow at the push of a button. Three of the shapes deflect backwards and require significant energy to overcome the turbulence they create from the airflow around them.

Air penalizes shapes for resisting its flow around that shape. And it isn’t only the flow around the front of the object that counts, as seen in the illustration, but also how the air is allowed to reform at the back of the object. As seen by the demonstration from the Zeppelin museum, a teardrop shape provides the least resistance to airflow. The other shapes suffer a penalty, more power required to move through the air, by not properly managing the airflow. Manage the dynamics of airflow and you enhance the efficiency of the vehicle.

At Innovation Day BMW mentioned that aerodynamics are critical in medium to high speed situations and that they have found that 40% of drag is defined by the proportions (shape) of the vehicle, 20% of drag is generated by wheels and wheel arches, 20% of drag is attributed to the underbody, and the remaining 10% of drag can be assigned to the air inlets. BMW actively manages those areas and highlighted their work on the new X5 during Innovation Day.

The rear of the new X5 received quite a bit of aero tuning. BMW has increased the roof taper and added aero blades which subsequently improve the coefficient of drag.

BMW also utilizes an air curtain to manipulate airflow around the wheel wells. They use aerodynamic wheel shapes and allow what would be trapped high pressure air in the wheel wells to escape via air breathers.

The improvements in airflow around the wheel wells from the 2nd generation X5 to the new X5, which reduces the deflection of air from the side of the vehicle, can be seen in the illustration below.

And less turbulence is generated by the aero optimized wheels as shown below.

Underbody airflow utilizes displacers at the front of the vehicle which direct airflow away from the wheels, reducing drag in the process. They also accelerate the airflow under the car which reduces lift and, subsequently, improves the driving dynamics.

An active air flap control on the new X5 not only reduces drag by 5% but also is helpful in managing engine temperature. By allowing the engine to come up to operating temperature sooner, fuel consumption is reduced.

By paying attention to the aerodynamic details BMW can improve the efficiency of the new X5. By reducing the workload to displace air, more power can be put to the group improving the dynamics of the vehicle. The work done to manage airflow on the new 3rd generation X5 has given the X5 a best in class aerodynamic coefficient of drag.

When the Zeppelins were being planned lightweight materials were hard to come by. The factory used aluminum, a very exotic material at the time – much like carbon fiber has been recently, to reduce the weight of the airship, thereby increasing its payload.

A display of an optimized aluminum support structure was on display in the Zeppelin museum and next to it was an equivalent part made of carbon fiber. Picking them up showed the dramatic weight savings CFRP parts can make. But, as with the work done in all phases of the Zeppelin construction, shedding weight wherever possible – and yet maintaining or enhancing structural integrity – provides great benefits.

BMW’s weight cutting focus is not just on structural materials, such as replacing steel with carbon fiber, but also on the multitude of parts that make up the vehicle. On the X5 they showed examples of weight savings across the board.

Adding lightness is a virtuous cycle. Reduce weight that has to be suspended and you can reduce the weight of suspension and brake components. It all adds up and for a given horsepower rating when the weight is reduced efficiency is increased as are the dynamics. 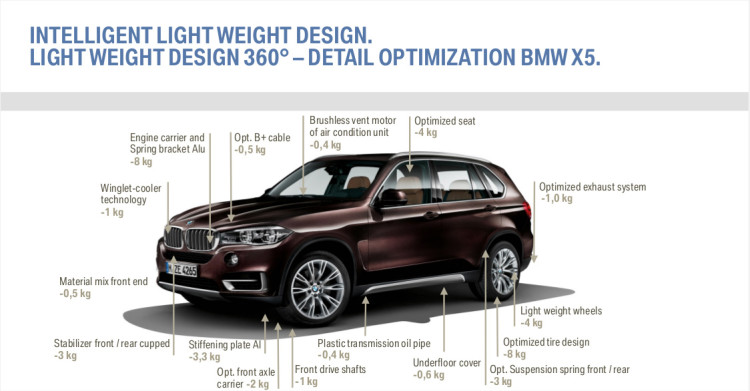 And one display highlighted the efficiency that BMW is bringing to its use of carbon fiber. An IP structural support was sitting on a table, normally made of a light metal such as magnesium, this appeared to be a plastic injection molding. But a normal plastic injected molded part would not necessarily have the structural integrity to support the myriad components that make up an IP stack.

It turns out the material used to mold the IP support were recycled CFRP trimmings, reduced to the bead structures required for injection molding. Very clever reuse of scrap CFRP from their production process. And undoubtedly less energy intensive than creating a heavier part out of magnesium.

For over a century engineers have been working to reduce weight and improve aerodynamics in vehicles. It was important when bicycling became popular in the late 19th century and the construction techniques pioneered by the bicyclists were incorporated into aeronautical design along with the new field of aerodynamics.

Now, over 100 years later, engineers are still improving structures based on the availability of new materials and production process. And thanks to increases in computation power, aerodynamics can be modeled more precisely and implemented with assurances that the changes will improve both the efficiency and dynamics of the product.

BMW has shown how it is keeping ahead of the curve in aerodynamics and lightweight construction by highlighting how the efficiently deliver driving dynamics during its Innovation Day 2014.