Steve Dinan made a deal with the speed devil, and it’s been meted out in the details. The physical manifestation of this speed demon’s work is the S3-R BMW 1M. Just what makes this devilishly fast car so quick, who is the man who dare alter a modern cult classic, and why should you pay him $32,472 (and trust him) to alter your 1M into fully-modded S3-R BMW 1M form? These are all valid questions. After driving Dinan’s evil creation I can tell you the answers to these queries with a measure of enthusiasm, certainty and post tire-punishing satisfaction.

It’s not what Steve Dinan will do to your bank account, but what he’ll do to your BMW that is the focus of this article. Yes, Dinan’s car modifications cost far more than those of most tuners – but here’s the un-cooked truth of the matter: Steve Dinan runs an engineering firm that rivals some of the best racing outfits in the world. He is an unwavering megalomaniacal perfectionist when it comes to all things automotive, settling for nothing less than spot-on, every time. Nothing is stamped with his name – no parts shipped – unless they pass Steve’s stringent standards. In fact – nothing leaves the shop unless Steve Dinan himself drives the modification part at great length and signs off on it. 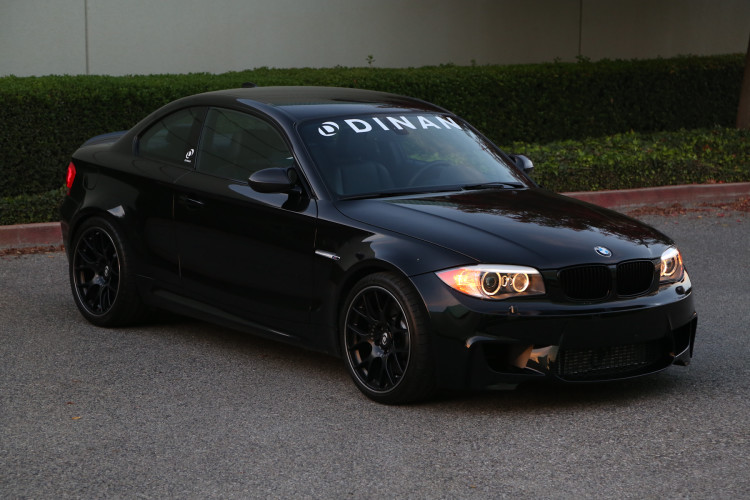 Exaggeratory as this may sound, I actually found a certain likeness between Steve Dinan and Horatio Pagani. Even parts that your eyes will never see are altered to both function at the highest level and achieve visual appeal – thus striking at perfection. Steve’s is a level of excellence that is unmatched in the BMW tuner world – even Alpina has reason to sit up straight and take a few notes here and there.

A lessor S3 1M can be had for a less lofty $16,719; you’ll still get the meat-and-potatoes of Steve’s engineering but you’ll forgo the stunning and highly dynamic BBS wheels, Dinan-Brembo brakes, carbon-fibre rear spoiler, mirror caps and much fatter Michelin Pilot Super Sports if you chicken out of paying the full monty. I imagine the less modded S3 1M would also lose a great deal of its romance – its undeniably exotic persona.

Visually the S3-R BMW 1M is menacing, building upon the 1M’s already handsome looks to perfect a decidedly masculine, nefarious form. Aesthetic changes continue into the cabin where you’ll find Dinan floor matts, a Dinan S3 serial numbered plaque and aluminum performance petals (the right-most of which helps you achieve flawless throttle blips for every heel-and-toe – more on that later).

Much has been altered under the in-your-face skin. A plethora of engine modifications focused on cooling and turbo boost yield staggering results: the S3-R BMW 1M produces 444 horsepower at 6,350 rpm and a stump-pulling 450 lb-ft of torque at 3,300 rpm. That’s more power than the all-new BMW M3 and M4 put out in a much more compact, ever so slightly lighter package. In other words, the Dinan 1M is bonkers mad and a complete joy to drive flat out.

Power delivery is commensurately turbocharged. Aggressive throttle inputs are met with a small helping of turbo-lag – but I don’t consider this a failing. The turbocharged performance – quirks and all – adds to the Dinan 1M’s personality – just as it does in the stock 1M. Lag has slightly increased over stock – but good lord does this thing punch you in the back once boost builds. From the seat-of-my-pants-o-meter the S3-R BMW 1M achieves 60 mph in less than 4 seconds. If my arm was twisted to venture a guess, I’d pin it at 3.8.

Dinan’s adjustable coil-over suspension, anti-roll bar, wheel bearing and rear toe-link kit completely transforms the handling of the diminutive M car from understeery to brilliantly neutral. Yes, a good helping of throttle will quickly rotate a stock 1M, but that doesn’t help you out on corner entry – nor on corner exit if you’re serious about lap times. Dinan’s suspension solution is a handling epiphany.

The engine and suspension mods are balanced by a powerful Brembo brake package and monstrously wide Pilot Super Sports all ’round. The dramatically wider front tire width is largely responsible for the improved turn in; you’ll never be shy of front-end grip. The wider front rubber and suspension tuning also provides more tactility through the steering wheel – whereas the stock 1M has excellent steering feel, the S3-R BMW 1M’s steering is grit-on-the-surface descriptive.

Had I not been having so much fun I may have found the S3-R BMW 1M to be slightly terrifying, only because the test circuit was so poorly surfaced. On smooth roads or any racetrack the 1M would be much less of a handful, stimulating more dopamine than cortisol receptors. On the atrociously rough roads of my test circuit however, the 1M’s tires spent nearly as much time airborne as glued to the surface due to the stiff suspension setup battling constant undulations. This, coupled with the S3-R BMW 1M’s quick steering ratio and short wheelbase, left the Dinan 1M feeling loose and very twitchy at speed. Again – I blame the road, not the car. On any road half as rough the 1M would come into its own, showing off its heroic dynamics and fly-like agility with aplomb. I’d love to attack Austrian alpine roads in this thing.

Power slides are easily controlled – though I didn’t execute too many: the particular S3-R BMW 1M I drove was a prototype and the only in existence. The Dinan 1M is without question a complete hooligan should you treat it like the devil it is – eager to send countless Michelins to tire purgatory.

After a proper blast on Californian mountain roads followed by a relaxed drive back to Dinan headquarters, I was left in awe of what Steve Dinan has achieved in the 1M. The folks of Morgan Hill have perfected a performance car that the world already held in high esteem. Dinan has made a great car epic and if you happen to be one of the lucky few chumps who own a BMW 1M (this includes you, Horatiu), I strongly encourage you to lend your machine to Steve Dinan for a few weeks. It will come back a prodigious, exotic supercar. You’ll have added the final brush stroke to your masterpiece.

To learn more about Dinan performance tuning for your BMW hit the jump to DinanCars.com.