BMW claims its tenth one-two-three in the DTM

Home » BMW claims its tenth one-two-three in the DTM 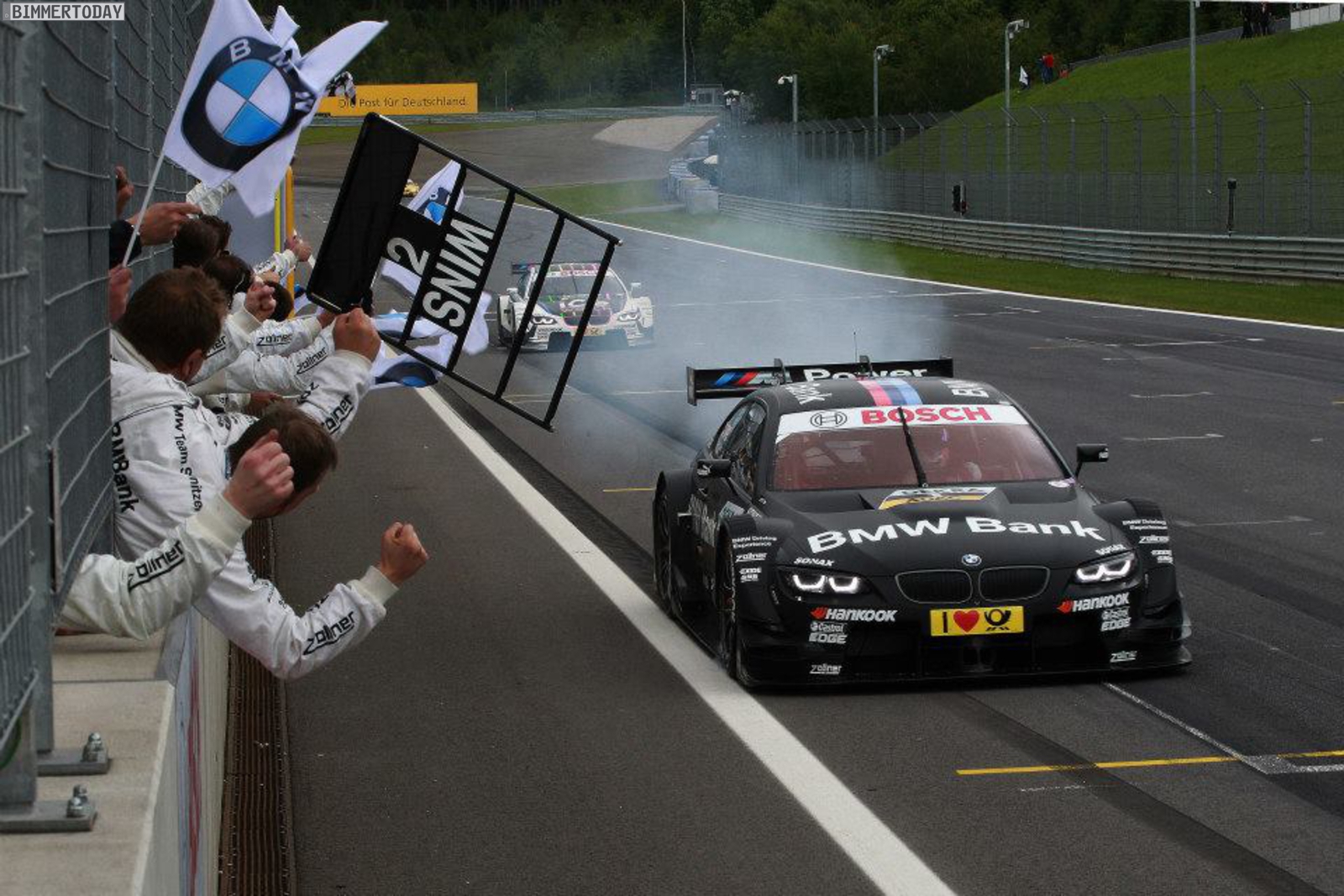 BMW Motorsport has added another chapter to its remarkable success story in the DTM: at the end of 47 laps, reigning champion Bruno Spengler (CA) crossed the finish line first in the BMW Bank M3 DTM to win the third race of the 2013 DTM in Spielberg (AT). Marco Wittmann (DE, Ice-Watch BMW M3 DTM) came home second, just 1.550 seconds later. He was followed by Timo Glock (DE, DEUTSCHE POST BMW M3 DTM), Wittmann’s BMW Team MTEK team-mate, who completed the first one-two-three for BMW since returning to the DTM in 2012. It was also the first appearance on the podium for the two rookies, in only their third race.

This was the tenth time in the history of the DTM that the podium had been completely monopolised by BMW drivers, while BMW Team Schnitzer celebrated its 13th victory in the popular touring car series. 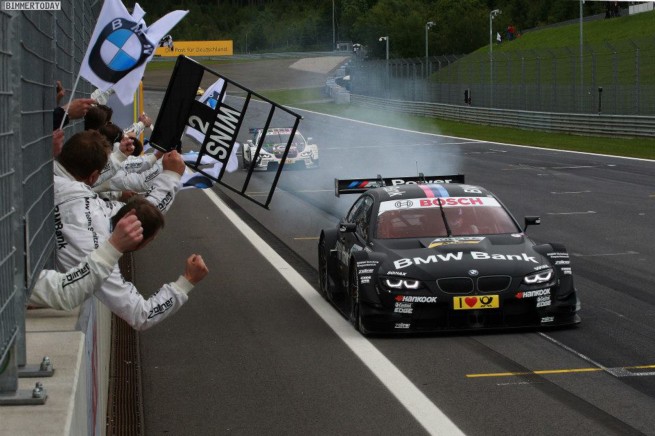 Spengler, who started the race from pole position, climbed onto the top step of the podium for the 14th time in his career. The Canadian dominated the race from the off and moved to the top of the Drivers’ Championship on 53 points courtesy of his first win of the season. In addition, Wittmann set the fastest lap of the race in 1:25.505 minutes.

Augusto Farfus (BR) in the Castrol EDGE BMW M3 DTM and Dirk Werner (DE) in the SAMSUNG BMW M3 DTM also picked up valuable points, coming home sixth and eighth. Therefore, five BMW drivers ended the race in the top eight. Martin Tomczyk (DE) produced an excellent opening lap to move up to fifth after the first few corners. After a number of fierce duels with rivals and his first pit stop, he was spun by Mercedes driver Roberto Merhi (ES), who was subsequently penalised. Tomczyk retired from the race on lap 30 with a damaged car. Joey Hand (US) had to park up his BMW M3 DTM on the 11th lap when the front-left wheel came loose after his first pit stop. Andy Priaulx (GB), starting from last place on the grid, was unable to make the progress required to finish in the points, ending the race in 19th in the Crowne Plaza Hotels BMW M3 DTM.

“That is a historic triumph for BMW. It is the first time since our DTM comeback we have had three BMW drivers on the podium. I am very proud of the entire team. Bruno Spengler produced a flawless display, leading from start to finish to move to the top of the overall standings. New BMW Team MTEK and its team principal Ernest Knoors also deserves a huge compliment: in only their third DTM race, our young rookie Marco Wittmann and our somewhat older rookie Timo Glock finished second and third to claim their first podiums. You have to take your hat off to that. Everything really came together perfectly today. We must make sure we savour the achievement. We will enjoy today.”

Charly Lamm (Team Principal, BMW Team Schnitzer):
“That was a great race day for us in Spielberg. It is nice to get our first win of the year under our belts. Bruno Spengler did another fantastic job. It was once again a very close affair. It is very competitive out there. However, he just keeps on pulling out flawless displays. The engineers provided him with a perfect car for the job. It has been our day – our weekend. Everything came together perfectly: the pit stops, strategy, everything. That is how racing should be. Dirk Werner also finished in the points, making it a very successful race weekend for us.”

Ernest Knoors (Team Principal, BMW Team MTEK):
“It is simply unbelievable that we have reached this level in such a short time. Our team is young and motivated – and learning every day. We want to enjoy this moment of success. That obviously takes a bit of pressure off us. Our drivers Marco Wittmann and Timo Glock deserve great praise. They have integrated superbly in the team and have pushed us on. We knew we could be successful if everything came together. That was the case today.”

Bart Mampaey (Team Principal, BMW Team RBM):
“This is a fantastic result for BMW. Congratulations to the other two teams. We didn’t have the ideal pace today. For a while it looked as though Augusto Farfus might not even finish in the top ten. Then our pit crew produced a great stop to make sixth place possible. In contrast, the stop did not go to plan for Joey Hand. These things can happen when you are changing the tyres within a matter of seconds. Despite this, thank you to the crew, who secured sixth place for us. We expected more but, generally speaking, it is a great day for BMW.”

Stefan Reinhold (Team Principal, BMW Team RMG):
“Congratulations to BMW Motorsport. That really is a fantastic overall result. And congratulations to BMW Team MTEK and team principal Ernest Knoors, for whom I am particularly pleased. We were also a new team when we celebrated our first podium here in 2012. I know how he feels now. We, on the other hand, had another difficult race. Above all, it is a shame Martin Tomczyk’s race was once again ruined by a rival car, just as it was last time out.”

Bruno Spengler (car number 1, BMW Team Schnitzer, 1st):
Tyres: Option-Standard-Standard
“A one-two-three is simply sensational. That does not happen very often in motor racing. We had one of those weekends, for which you spend your entire life working. However, it was not as easy as it looked. My pace was very good throughout the entire race, but I had to push in the middle of my first stint in order to stay in front. This victory belongs to BMW Team Schnitzer. The strategy, with the late second stop, was the key to the success.”

Marco Wittmann (car number 21, BMW Team MTEK, 2nd):
Tyres: Option-Standard- Standard
“I am extremely happy with second place. Bruno was simply unbeatable today. I did not get off to a particularly good start, but had fantastic pace after that and was able to pull away from the cars behind me. It was an awesome race for BMW Team MTEK. My team-mate Timo Glock also made it onto the podium in only his third DTM race – just as I did. That is definitely worthy of a celebration.”

Timo Glock (car number 22, BMW Team MTEK, 3rd):
Tyres: Standard-Option-Standard
“That was a dream weekend for everyone at BMW Team MTEK. To land both cars on the podium in only our third race, and with such a short period of preparation: you cannot overstate the achievement. Thank you to my crew – the strategy was perfect today. It has taken almost four years for me to finally be back on the podium. It is awesome that it happened so quickly in the DTM. The one-two-three for BMW is also magnificent.”

Augusto Farfus (car number 7, BMW Team RBM, 6th):
Tyres: Option-Standard-Standard
“The car was difficult to drive. However, we survived even though car was just not quick enough. It is just good to bring some points home, but I had obviously hoped for more than that. Congratulations to the guys on the podium. They did a great job.”

Dirk Werner (car number 2, BMW Team Schnitzer, 8th):
Tyres: Standard-Option-Standard
“It was an exciting race. I had a very good start and first lap, which I am happy about. After my pit stop, with the option tyres I had quite a good pace, but not quite good enough to be as fast as Timo. I was hanging on and was quite happy with the car. In the end after our second pit stop I came out in a group of cars where we really had to fight hard to defend positions. I lost one to Ekström but was able to keep Paffett behind me. I am happy about the points.”

Andy Priaulx (car number 16, BMW Team RMG, 19th):
Tyres: Option-Standard- Standard
“I really have very little to say after today’s race. I wish I could explain exactly what the problem is. The car was just not quick enough. I have tried everything I can to find the solution and so has the team, so it is not from a lack of trying. We must try to forget this race as quickly as possible.”

Martin Tomczyk (car number 15, BMW Team RMG, DNF):
Tyres: Option-Standard-Standard
“The race started well and I was in fifth soon after the start. Basically my car was not good enough to follow the others, but after the crash with Merhi it was not drivable anymore and I had to retire. It is a shame but it is like it is. This is the second time this year I have not been able to finish a race, so I am not happy about that.”

Joey Hand (car number 8, BMW Team RBM, DNF):
Tyres: Standard-Option
“Mistakes happen. That is motor racing. We win and lose together, so I am not blaming my mechanics. I am proud to be a part of this fantastic BMW Team RBM. The guys work pretty hard for their success. Generally speaking, my car was not as bad as my start position possibly suggested. The Parc Fermé conditions obviously mean we cannot change very much overnight after qualifying. However, I am certain I could have made up a few places. It is a real shame.”

Standings after 3 out of 10 races.