The 2013 MotoGP season is a special one for the BMW M GmbH which is celebrating a double anniversary. It is the 15th year as ‘Official Car of MotoGP’ and at the end of the season, the BMW M Award for the best MotoGP qualifier will be handed over for the tenth time. Since the end of 2003, the rider with the best qualifying results has been awarded an exclusive and individually customised BMW M automobile. On the occasion of the 2013 anniversaries, the prize for the BMW M Award is a special highlight: a BMW M6 Coupe. The car was revealed today at the Spanish Grand Prix at Jerez.

“For Dorna, BMW M is more than just a partner,” said Carmelo Ezpeleta, CEO of MotoGP promoter Dorna Sports, who attended the presentation at the Jerez circuit. “We share a friendship and work together as a team. Our collaboration is an incredible experience and we are very happy. The BMW M Award is very important within the MotoGP, as all riders look forward to it. The car hand over in Valencia is an expected event. BMW M provides a better model every year, and this year even Dorna is surprised. For sure the riders are keen on discovering the new car and will come to see it for themselves.”

The BMW M6 Coupe for this year’s BMW M Award winner features an exclusive ‘Frozen Black Metallic’ paintjob. The dynamic colouring continues with the matt-black, double- spoke 20” M light alloy wheels. The design of the high-performance Coupe was developed in the wind tunnel. The extremely low-slung front, with integrated adaptive LED headlights, and sporty rear end take full advantage of the aerodynamics. The M Power under the bonnet is provided by an M TwinPower Turbo, eight-cylinder engine, which generates an impressive 560 hp (412 kW). The innovative technology for which M is renowned – including carbon ceramic brakes – guarantee perfect handling in all situations. The sporty elegance of this special-edition model continues in the interior.

Among the many other features of the car presented to the winner are M multifunctional seats for driver and passenger, ‘Merino / Sakhir Orange’ leather upholstery, the navigation system Professional and a head-up display. Carbon fibre interior trims complete the racing character of this BMW M6 Coupe. 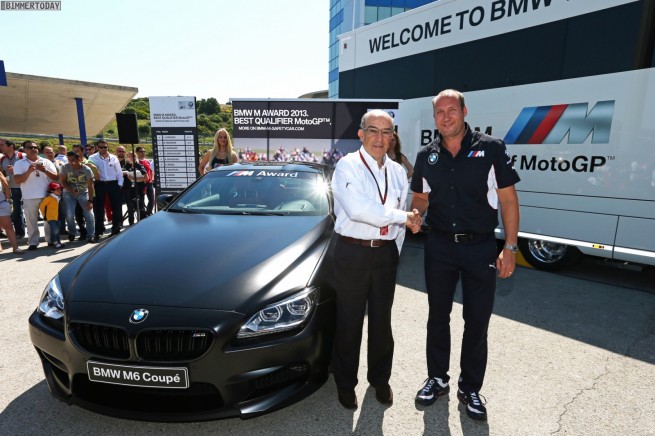 Just like the points system for the races, riders at each Grand Prix weekend are awarded points relative to their positions in qualifying. Pole position is rewarded with 25 points, second place on the grid earns 20 points and third place scores 16 points – right down to one point for 15th. The rider with the most points at the end of the season wins the BMW M Award. Valentino Rossi and Casey Stoner are the current record holders, each with three BMW M Awards to their name. Jorge Lorenzo claimed his second BMW M Award last season. The first winner, back in 2003, was Nicky Hayden. 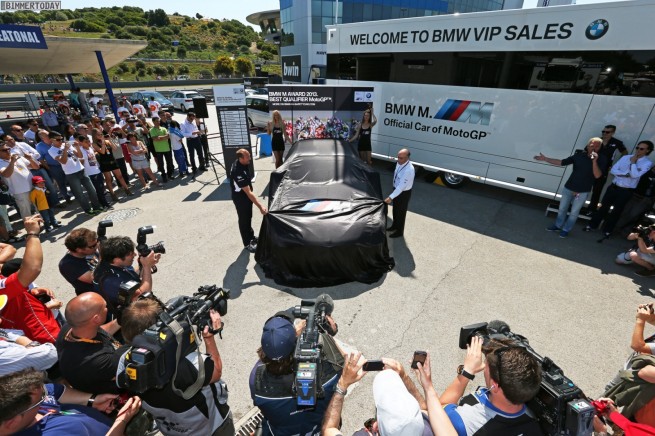 The Spanish Grand Prix marks the start of the European season of the 2013 MotoGP World Championship. On this occasion, BMW M GmbH officially handed over the 2013 fleet of ‘Official Car of MotoGP’ to representatives of Dorna Sports and the International Road Racing Teams Association, IRTA. In total, the fleet for the 2013 season comprises five BMW M and M Performance models. It is spearheaded by the brand new BMW M6 Gran Coupe Safety Car. The BMW M6 Coupe and the BMW M5 are also in action as Safety Cars. The Safety Officer takes to the track in a BMW M3 Coupe, while two BMW M550d xDrive Tourings are used as Medical Cars. BMW Motorrad provides two new BMW HP4s as Safety Bikes.