Interview with Eric Sargent on new BMW Apps for iDrive, eCall and update on iPhone 5 connector

BMWBLOG sat down with BMWNA Technology Manager, Eric Sargent at the 2013 New York International Auto Show for a detailed interview to find out what new tech BMW is up to and to find out where BMW is with the iPhone 5 Adapter.

BMWBLOG: Tell us about the new apps BMW is coming out with for the iDrive with option 6NR.

Eric Sargent: The new partnerships we just announced at the New York Auto Show are 4 different apps. The first one is Audible which is the worlds largest producer and seller of digital audio books. They have over a 135,000 books and are the exclusive provider of audio books in the Apple iTunes store. One of the great features of Audible is the cloud tracks where you are in the electronic reader book such as a kindle book. When you close the Kindle Book, and you get into your BMW and you start the Audible app, it starts and knows the exact page you were on and continues from there. When you end listening in your BMW, it syncs that back to your digital reader through the cloud. When you get home and get in bed to read, your digital audio book knows what page you were at last.

BMWBLOG: That’s cool. Tell us about the other new apps.

Eric Sargent: One of the other apps is Rhapsody which is a subscription based music service. They have over a million members and 16 million tracks. You can search for a specific song, album or artist. It gives you the ability to download the songs and you can go through your library and skip forward, skip back. You can create a radio station with a generated playlist.

Yet another partnership BMW just announced is with Glympse. This is a location based sharing service. The best example is: I am supposed to meet you for lunch. You live 5 minutes a way, I live an hour away. So I get into my car and send you a Glympse and for the next 60 minutes you are allowed to track my location in real time. Plus, you get an ETA of when I am gonna be there. That way you are not stuck sitting at the restaurant waiting for me. You know when I am 5 minutes out so you can then get into your car and head over. Again, that’s me specifying to you that you can see my location for how long I choose. You cannot just tap in and find me where ever I am at any time.

Tunein is actually already part of the BMWConnected app. There are podcasts, to stations worldwide. One of the interesting things they have is, if you are listening to a station from Australia for example, you can click on “listen to similar stations” and it would through an algorithm send you to a station in say Finland with similar content.

BMWBLOG: Nice! You talked about a big change for BMW in terms of a safety addition to all new BMWs where they will call EMS when you get in an accident. Can you tell us a little about that and how many years of coverage will be included with the purchase of a new BMW?

Eric Sargent: Today, we have something called BMW Assist and the Safety Plan. A couple of the features you get are the E Call that includes automatic notification during a collision and Tele-Services. Those two features, we are announcing today, will become standard equipment on all BMW’s starting with the 2014 Model years and most cars will have it. 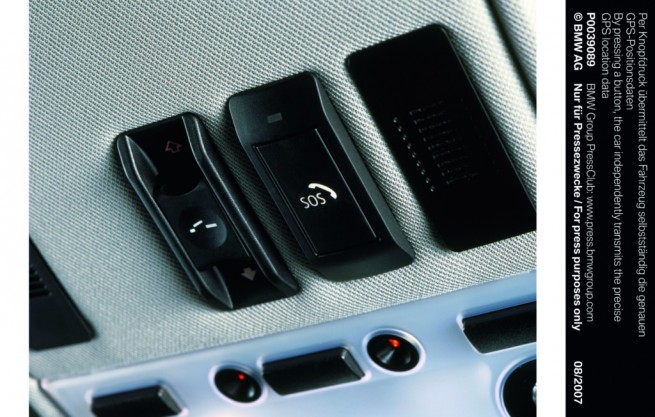 The E Call – the SOS Button if I hit it, 24/7 I’ll get a response agent. The other thing is if I do have a collision, the enhanced collision notification. When the airbags deploy it will automatically notify the response center. What it does is send data back to them such as location, if there were multiple impacts to the car, if the car rolled over or not and if seatbelts were used. It’s put in an urgency algorithm. With the input of a renowned trauma surgeon and BMW’s engineers the data can generate the likelihood of a severe injury. Obviously you cannot tell the exact injuries from this but you can determine the likelihood of severe injury. This feature will be included in the cost of the purchase of the car for 10 years.

BMWBLOG: Does this feature transfer to a subsequent owner if the BMW is sold? Even to say a third owner for example?

BMWBLOG: Let’s talk about the new iDrive coming out.

Eric Sargent: Right now were are sitting in a 2013 X1 (where the interview took place) and it has the older series navigation. The new navigation system, iDrive 4.2, came out in the 7 Series and 5 Series. This new iDrive is also in the active hybrid 3. It will be going into more cars in the future obviously but we haven’t announced what cars and when. The differences are in that system you have a dedicated graphics chip. You have 3D graphics processing and you have a 200GB hard drive compared to the previous gen’s 80GB hard drive. All the graphics are rendered in 3D and have faster processing. The voice recognition has more flexibility in what commands you can give. It also has differences with the HD radio stations which are automatically generated in the station list. Previously you had to click on the stations and then you would see list of HD Stations. You can get album art with HD radio.

Another thing you have is enhancements with BMWOnline. New features such as pictures of your destination such as Google Street View. This is locked out while you are diving for driver distraction reasons but while you are parked you have access to these pictures and can actually spin around just as you would on your computer.

BMWBLOG: Is BMW Online and optional fee to get those types of services?

Eric Sargent: That portion of BMW Online is an optional $199 per year currently. It includes BMW Online and BMW Concierge Services. So if I want to contact the center, I hit the SOS Button and they can tell me about hotels in the area or even restaurants. This location can then be sent to your iDrive NAV and even we can talk you to your destination if you chose.

BMWBLOG: Both new and old iDrive systems have the ability to let your BMW get emailed a route to the iDrive, correct?

Eric Sargent: Yes. Part of the BMW Safety Plan is the my info feature. So if I am on my laptop, I can send that point of interest to the iDrive including the address and phone number. The other thing I can do with the my BMW remote app so you can accomplish the same thing with my iPhone and send that to the BMW iDrive as well.

BMWBLOG: Any information on when BMW will have an iPhone 5 snap-in adapter available?

Eric Sargent: We haven’t announced anything yet. It’s taking time to develop and engineer it as the size and connector are different. There is no timing available for this right now.

BMWBLOG: Will there be any ability to retrofit BMW Apps to an existing iDrive that did not come from the factory with option 6NR BMW Apps?

Eric Sargent: Due to hardware requirement for BMW Apps, there is currently no way to retrofit this.

BMWBLOG: Lastly, We like BMW Apps a lot and think it’s a great feature to integrate smart phones into an automotive interface for BMW’s. Why doesn’t BMW make BMW Apps standard with all iDrive systems?

Eric Sargent: We see a big demand for BMW Apps but it’s not for everybody and it is a feature that is an additional $250. We are looking at bundling it differently, however, so for example on some cars if you order the Technology Package it could include BMW Apps.

BMWBLOG: Thank you very much for your time.

We have also included the audio portion of this interview: