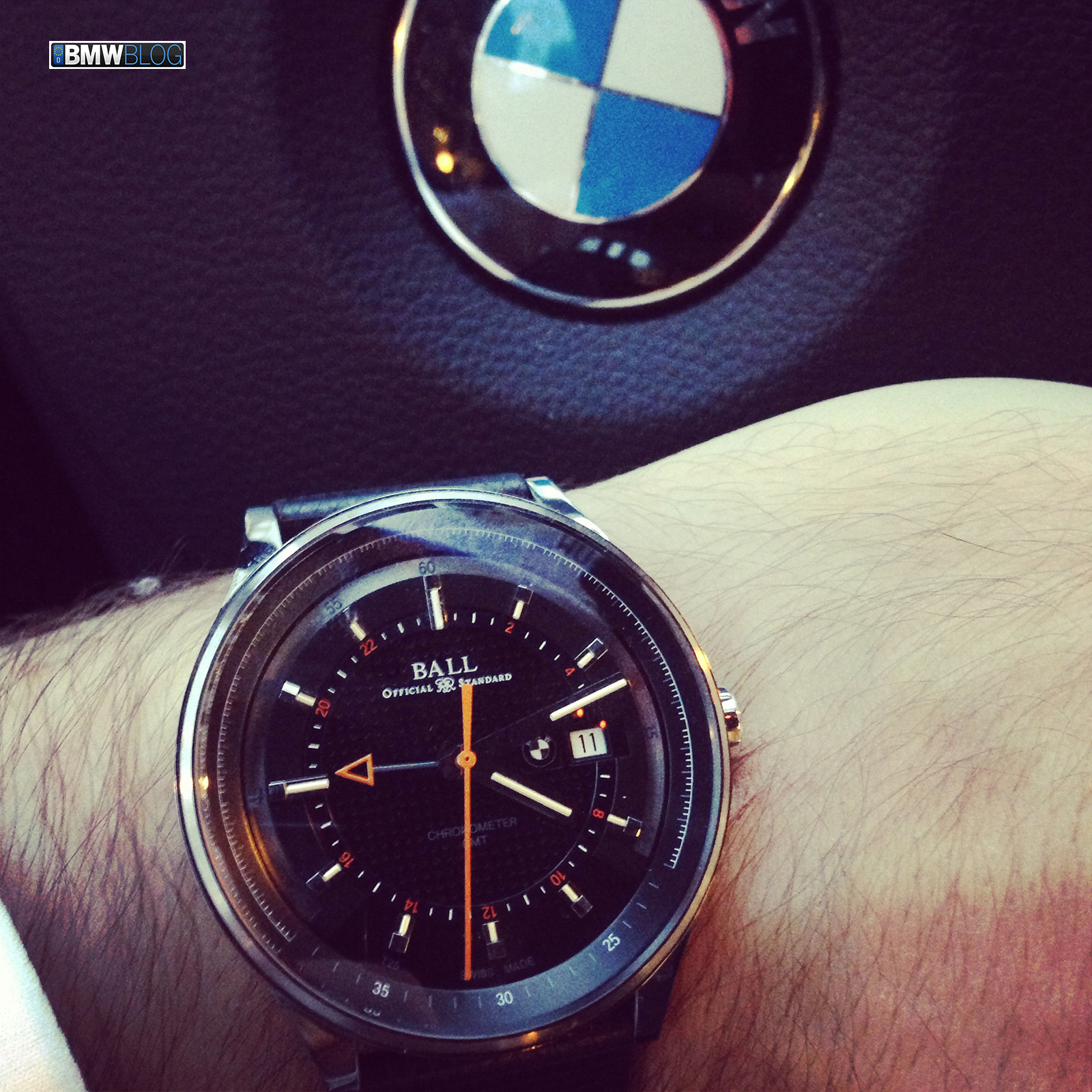 Renowned Swiss watchmaker BALL Watch released in cooperation with BMW a limited edition series of watches. The BALL BMW watches are built atop the core values of the two engineering-driven companies: performance, mechanical precision and spirit of innovation.

Former Jaeger-LeCoultre designer Magali Metrailler was in charge of the project which produced three distinctive models.

The Classic BALL BMW watch has a 40 mm steel case with a COSC-certified ETA 2892-2 movement. In the most minimalistic way, the fairly large BMW logo is engraved in the dial, which is available in black, silver, blue or gray. Next we have the GMT with its 42 mm case. Using the ETA 2893-2 movement, the watch displays the time in two time zones. Compared to the Classic model, the GMT has a significantly smaller BMW logo placed next to the date which is more appealing to watches aficionados. At the high-end of the spectrum we have the Power Reserve model featuring a 42 mm DLC-black coating case and an ETA 2897 movement. The BMW logo has a similar size and placement as the GMT model. 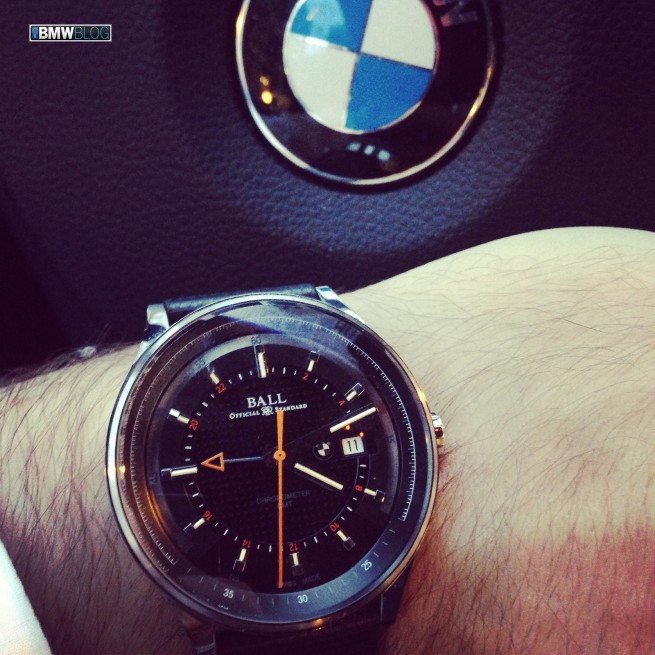 Courtesy of BALL Watch USA we had the opportunity to extensively review the GMT model with a DLC black coated case that contrasts nicely with the orange accents on the hands. According to BALL, BMW was deeply involved with the design and after two years the final product were ready to hit the shelves. Just like BMW cars, the BALL watches aim to combine sportiness and modernism into a single package.

The curved sides of the watch remind us of some of the BMW design lines we see sweeping across the sides of their cars which not only give the car and in this case the watch some character, but it also gives the impression of luxury. Furthermore, the crown features a subtle BMW logo.

The 42mm wide GMT stands out with its brushed steel case that can be either dress up or dress down, making this particular model the most versatile out of all the three offerings. 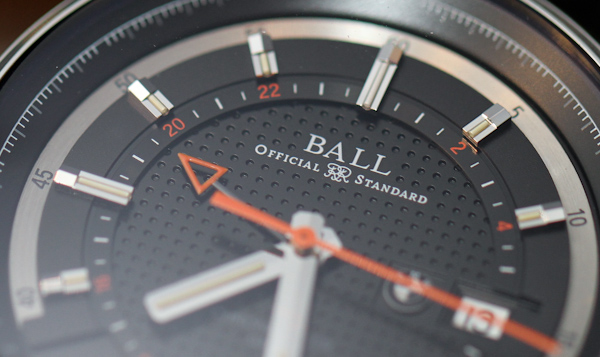 The orange hands and hour markets also remind us of the iconic BMW dashboards and their orange lights. But no worries, they fit the overall color scheme while giving the GMT a classy look. Like all Ball watches, the GMT features tritium gas tube illumination.

Our model came with a strap instead of the fancier steel bracelet, but we didn’t mind since we felt that it goes well with our sporty daily driver, the Valencia Orange 1M. The strap is made out of a textile material that looks like rubber instead of the typical leather strap.

The new BALL and BMW watches include a revolutionary anti-shock system. Patented as Amortiser, the system protects the movement against extreme shocks. The unique micro-mechanical system, inspired by the automotive world, features a shock-absorbing protection ring enveloping the movement. 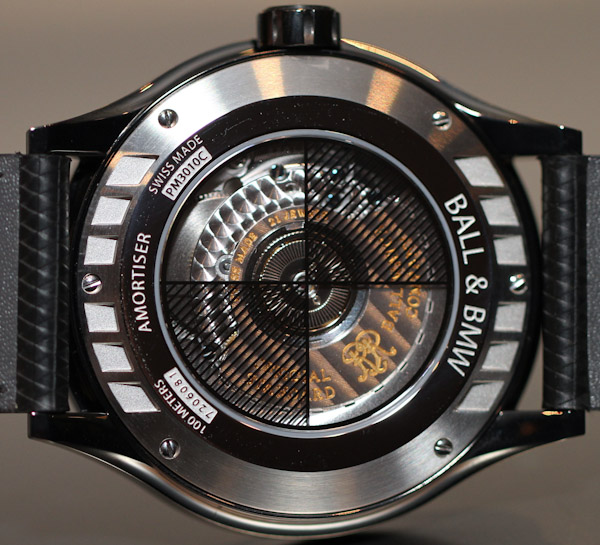 BALL says these unique watches are priced to be affordable by owners of the cars and in this case the GMT had a retail price of $4,000. The watches are not available at your local BMW dealerships but you can find them at several BALL watch retailers. 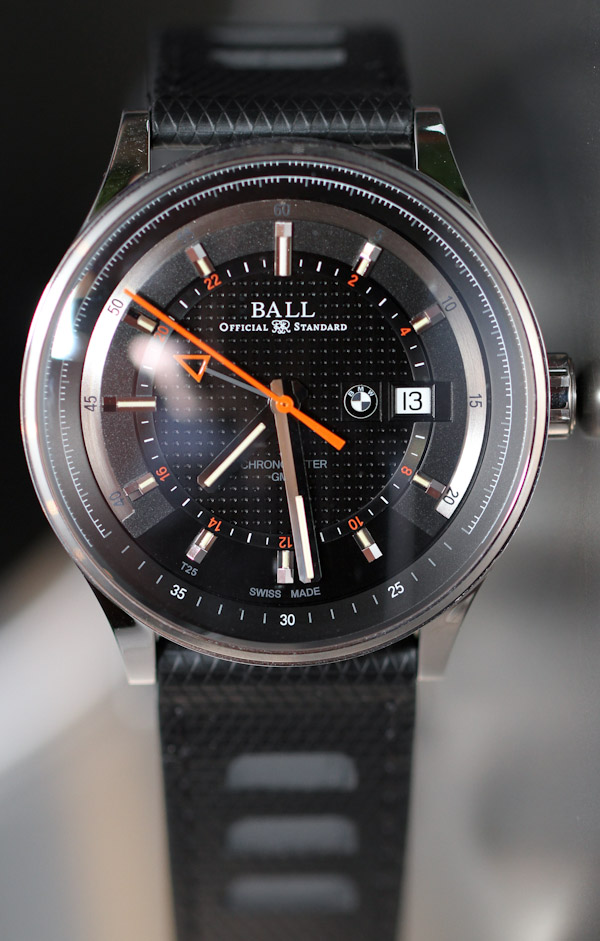 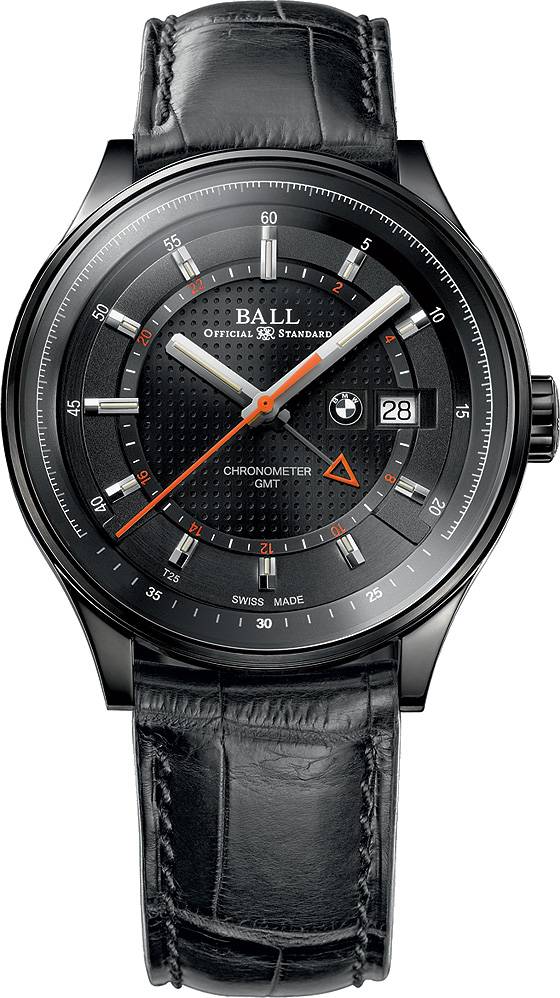