Racer Scott Pruett led an all-Chip Ganassi Racing with Felix Sabates charge to the front of the grid for the Rolex 24 at Daytona as BMW Power swept the top-three starting positions in today’s qualifying session for Saturday’s 51st annual twice-around-the-clock endurance classic.

Pruett, the defending GRAND-AM driver’s co-champion, drove the No. 01 TELMEX/Target BMW Riley to the pole position with a 1:40.553-minute lap around the 3.56-mile Daytona International Speedway road course. Pruett will share the No. 01 machine this weekend with his season-long co-driver Memo Rojas, Juan Pablo Montoya and Charlie Kimball.

Only .093 seconds behind Pruett, Scott Dixon followed with a 1:40.646-minute lap to place the No. 02 Target/TELMEX BMW Riley on the outside of the front row. Dixon will co-drive with Dario Franchitti, Jamie McMurray and Joey Hand. 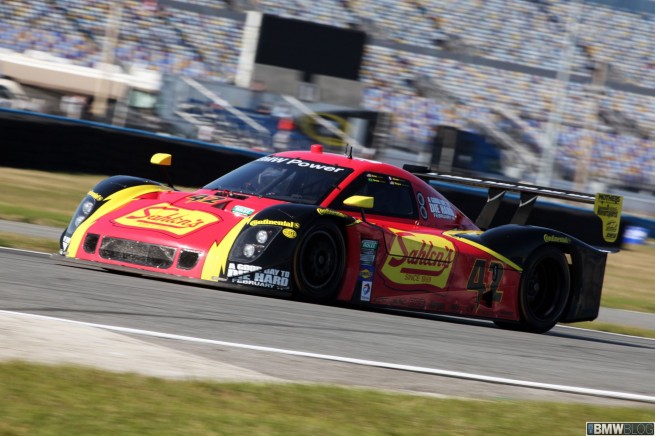 Scott Pruett – (first) – “I don’t think we could have written a better opening chapter to this weekend’s story than to qualify our cars 1-2 and have BMW go 1-2-3. I want to dedicate this pole to one of our crew members, Sammy Gonzales, who lost his battle with cancer just prior to this qualifying session.”

Scott Dixon – (second) – “This is a great result for the team. We struggled with a few steering issues in the No. 02 car this morning that limited our time to make more improvements, but overall both cars are quick.”

Dane Cameron – (third) – “It is a long race, but third on the grid is a great way to reward the team for all their hard work and investment. We are new to this class so we really did not have any expectations today. We have just focused on learning what the car likes and I am pleasantly surprised to be so near the front.”

The Rolex 24 at Daytona will start at 3:30 p.m. Eastern Time, Saturday, January, 26th. The race will be televised live on SPEED from green flag to 11 p.m and again from 9 a.m. to the checkered flag.