Today, BMW steps into a new segment where the differentiation between similar vehicles are made at the numbering level. Following Audi’s steps, BMW splits the 3 Series family into separate offerings: the 3 Series Sedan and sports wagon remains under the old nomenclature, while the coupe and convertible variants get a new name – 4 Series.

The BMW Concept 4 Series Coupe adds a new dimension to the qualities of the BMW 3 Series Coupe in terms of aesthetics, dynamics and elegance.

The latest addition to a nomenclature that sees BMW building on the fine tradition of its large BMW 6 Series and BMW 8 Series Coupes, the “4” stands for greater sportiness, greater exclusivity and even clearer differentiation from the BMW 3 Series range.

In the photo comparison below, the 4 Series takes on the aforementioned Audi A5 and the Mercedes-Benz E-Class Coupe.

See our technical comparison of these vehicles 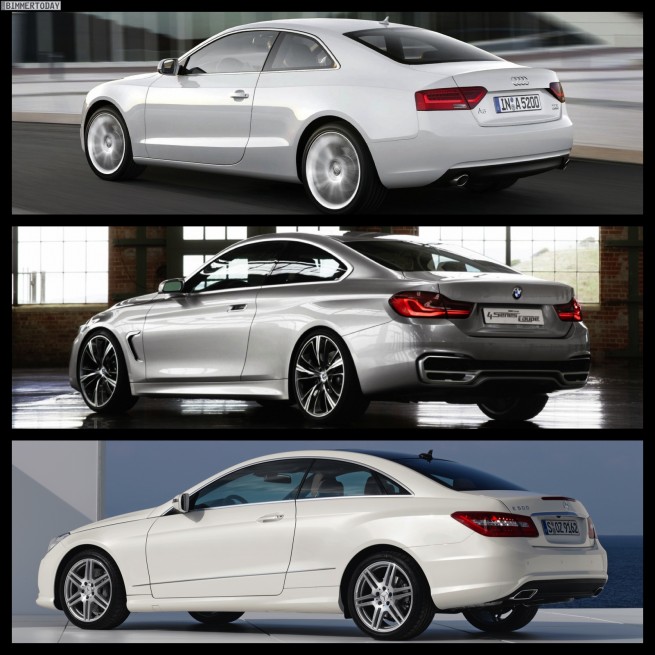 Visually all these competing models have a certain appeal that can and are catering to a wide range of customers, some may enjoy the sportiness and dynamics of the 4 Series (just in concept form for now) or the fluid lines and interior luxury of the A5 and the classic design of the C-Class Coupe.

We put together a photo gallery that visually compares these three models. As always, we are offering you the option to vote on the best side and we encourage you to tell us your thoughts in the comments box below.