Video: BMW i8 Spyder Concept at the 2012 Paris Motor Show

Three years after the unveiling of the 2+2-seater BMW Vision EfficientDynamics Concept, BMW i showcases for the public in Paris the second variant of this innovative hybrid sports car. The Spyder Concept is a 2 seater, open top variant with the same architecture but with a lot more curb appeal. Among the most eye-catching features of the BMW i8 Concept Spyder are the upward-swivelling, windowless doors.

The i8 Concept Spyder is based on the LifeDrive architecture seen in the first i8, underpinned by a lightweight modular construction and the use of high-quality high-tech materials. The i8 Concept Spyder is a plug-in hybrid powered by an eDrive drivetrain combining a high-performance electric motor and an internal combustion engine outputting together 354 horsepower. 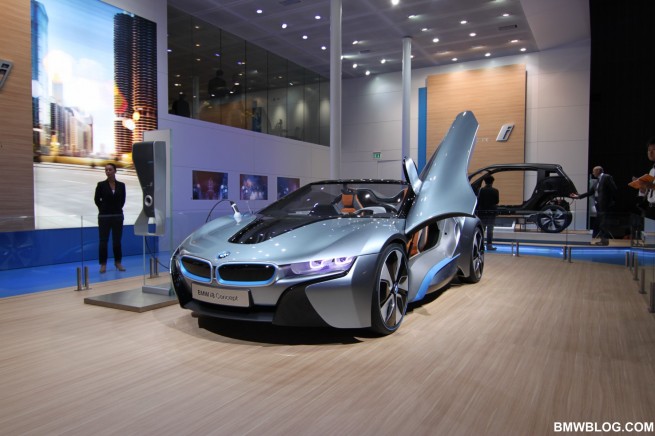 That is enough to accelerate the BMW i8 Concept Spyder from 0 to 100 km/h (62 mph) in five seconds on the way to an electronically governed top speed of 250 km/h (155 mph). Despite this performance, the two-seater burns just three liters of fuel per 100 kilometers (equivalent to fuel economy of 94 mpg imp) in the European test cycle.

We were in Paris to see its second public unveiling after Beijing Auto Show earlier this year. Here is a quick video of the futuristic car: